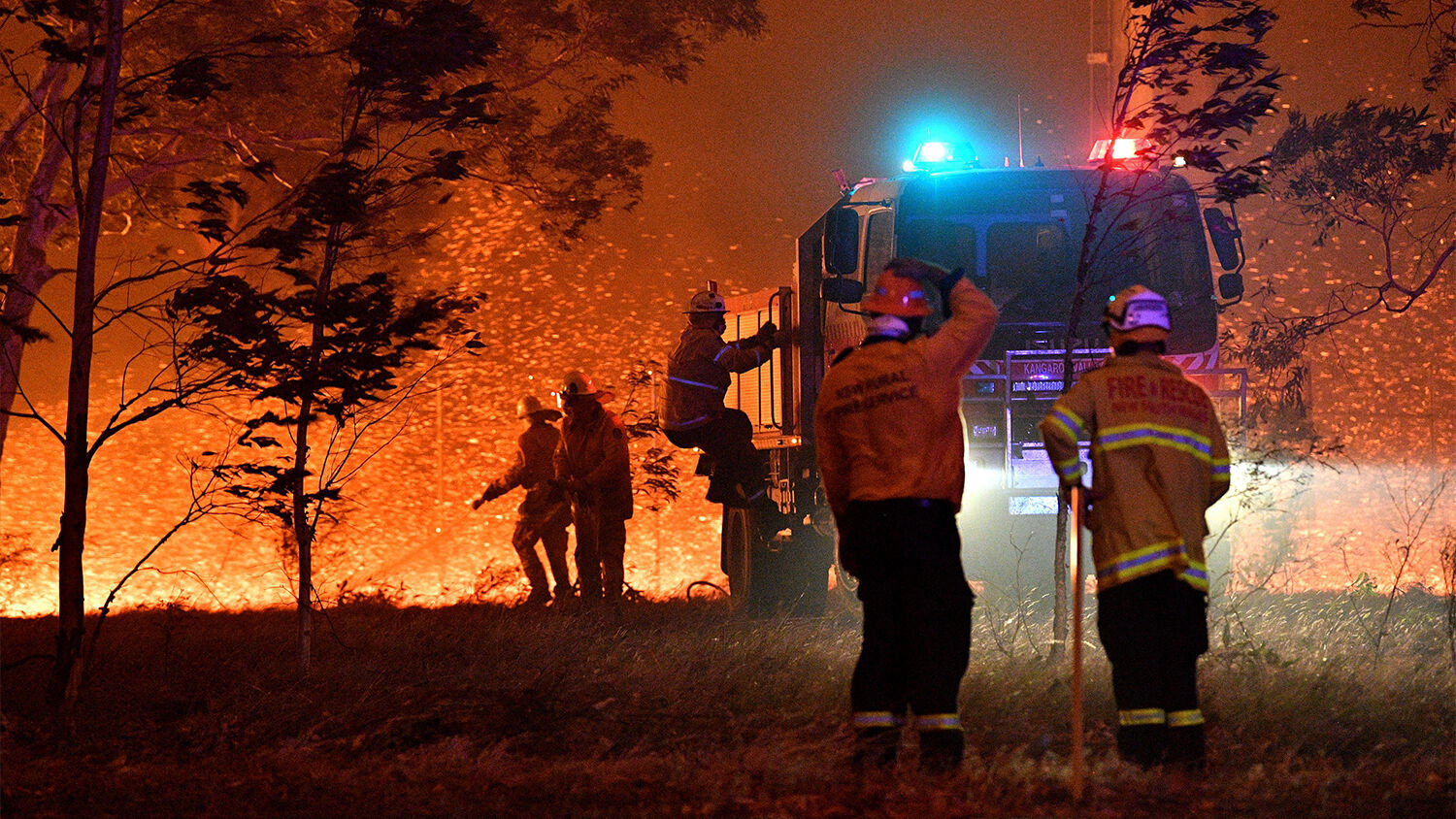 Firefighters hose down trees as they battle against bushfires around the town of Nowra in the Australian state of New South Wales on Dec. 31, 2019.
SAEED KHAN/AFP via Getty Images

Thousands are trapped behind a curtain of flames as the death toll from Australia’s fires continues to rise.

Fires continue to ravage Australia as it suffers through an unprecedented fire season. Over 100 fires are burning across 13 million acres of land, an area much larger than Denmark. The fires have destroyed more than 1,300 homes and killed 18 people. With dozens of fires still out of control and weather conditions worsening, the death toll is expected to rise.

On Monday, 28-year-old Samuel McPaul became the 10th firefighter to die when his 12-ton fire truck was lifted into the air and slammed down onto its roof by a fire tornado in New South Wales (nsw). The two colleagues with him escaped with severe burns and injuries. Another fire truck suffered the same fate, but its firefighters survived. The nsw fire commissioner described Monday’s condition as “truly horrific.”

On Tuesday, to the south of nsw in Mallacoota, Victoria, fires trapped citizens before they had time to evacuate. Four thousand holiday-makers and locals took refuge on the beach, trapped by blazes that encircled them. Boat owners took to the water for safety; many others entered the water for protection from the ember showers and heat.

Images from Mallacoota are eerie. Thick smoke has turned day into night, and the area is blanketed by a thick red haze. Mallacoota resident Francesca Winterson described the situation: “We are surrounded by red sky, choking dust and choking smoke, and embers falling on the town.” Authorities warn that the fires are causing extreme thunderstorms and “ember attacks.”

The military has even been deployed. Navy ships and military aircraft will bring much-needed supplies, such as food, water and fuel, to areas cut off by the fires. A naval vessel is being sent to rescue those trapped in Mallacoota. For those who would rather wait until they can escape by road, authorities estimate it will take two to three weeks.

Military helicopters will be deployed to help firefighters battle the flames and to bring in more firefighters.

Air quality in the nation’s capital, Canberra, was 21 times the hazardous rating and is said to be the worst in the world.

There has been significant damage to infrastructure in areas. Power and communication lines have been lost, leaving families without contact and fearing for the safety of their loved ones. Pumping systems for water supplies have been destroyed and sewage systems damaged. Banking systems are also down, leaving some with no access to available funds to buy food and fuel.

Smoke from the bushfires is now affecting New Zealand, creating a haze across parts of the country and turning glaciers brown. One Christchurch resident said they could “actually smell the burning.”

Beyond all this is the impact on the wildlife. So much of their habitats have been destroyed and many animals killed. The University of Sydney estimates that half a billion animals have been killed in the fires. New South Wales alone is estimated to have lost a third of its koala population.

And conditions are expected to get worse in the short term with a heatwave and strong winds forecast for Saturday.

A seven-day state of emergency will go into effect on Friday in nsw with forced evacuations. A 12,000-square-kilometer (7,456-square-mile) region along the coast has already been told to evacuate within 48 hours in the “largest evacuation of people out of the region ever.” But there are fears that many will be trapped because fuel supplies cannot be restocked during the fires and many places are out of fuel. Some will not have enough fuel to get out—authorities are warning that only those with a full tank should attempt the journey. Even those with a full tank may still get trapped in long traffic jams on the few roads that are still open. It is common in Australia for there to be only one road into more isolated towns. If these are blocked by fire, there is no way out.

And the fire season is only half over with three more months of hot weather to come. It appears that the worst is still ahead.

How are people responding? With rage—rage at the government for not doing more to combat climate change.

The 2020 Climate Change Performance Index rated Australia as having the worst climate change policies of 57 countries assessed, following just behind the United States, whose president has also faced backlash for his apathetic attitude toward the climate argument.

Many opponents to Australian Prime Minister Scott Morrison claim that the country is sinking with “no captain at the wheel,” and the Greens Party has demanded a royal commission into the government’s handling of the fire crisis.

While it’s true the prime minister hasn’t exhibited strong leadership during this crisis, climate change is not the cause. (For information debunking climate change science, read “The National Climate Assessment Is Junk Science.”)

Every new disaster we suffer brings out climatologists speaking as though these curses would cease if only we would all become vegetarians, erect windmills, and stop flying airplanes. This is not only delusional, it is terribly dangerous.

Many people see the dishonesty and hypocrisy of climate alarmism. But even they do not see the real disaster in it: the fact that this error obscures the real lesson we must take from these curses!

If climate change is not the cause of Australia’s fires, then what is?

Instead of blaming the government, Australians need to look at themselves. In Leviticus 26, God says, “If ye walk in my statutes, and keep my commandments, and do them; Then I will give you rain in due season, and the land shall yield her increase, and the trees of the field shall yield their fruit” (verses 3-4). In other words, obedience to God’s laws results in blessings.

But in Deuteronomy 28:15, 23-24, God says, “But it shall come to pass, if thou wilt not hearken unto the voice of the Lord thy God, to observe to do all his commandments and his statutes which I command thee this day; that all these curses shall come upon thee, and overtake thee …. And thy heaven that is over thy head shall be brass, and the earth that is under thee shall be iron. The Lord shall make the rain of thy land powder and dust: from heaven shall it come down upon thee, until thou be destroyed.” God promises curses for disobedience. And one of the ways God curses is through the weather.

Our lands are full of sin. We have not kept “all his commandments and his statutes.” The sin multiplies year after year. Is it any wonder the fires get worse every year?

As Satan strives to cover the real cause of these weather disasters with the climate change argument, you do not have to be deceived. For more information on why our nations are suffering through more and more devastation, read our free booklet Why ‘Natural’ Disasters?