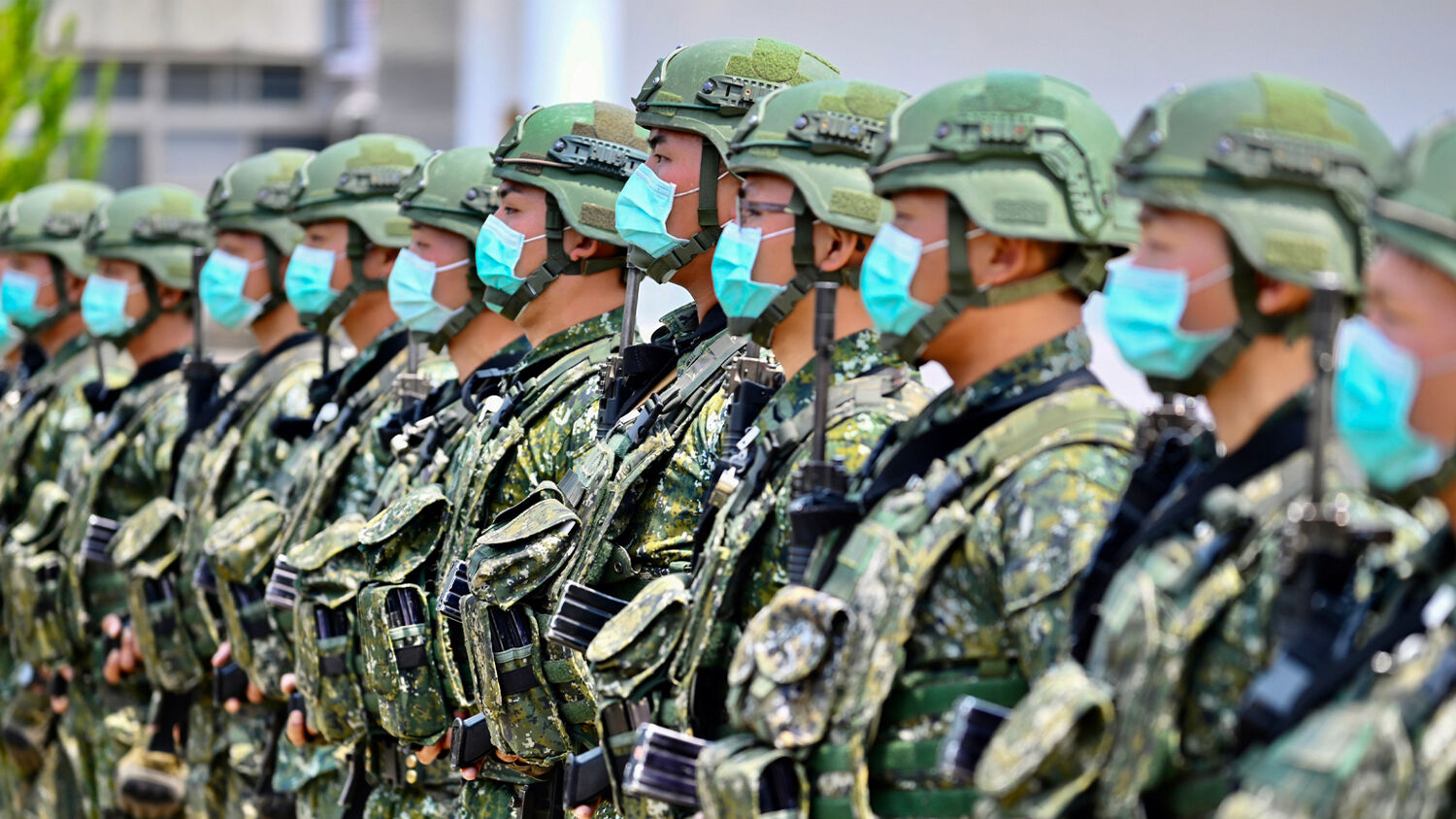 Soldiers wearing face masks amid the COVID-19 coronavirus pandemic listen to an address by Taiwan President Tsai Ing-wen during her visit to a military base in Tainan, southern Taiwan, on April 9, 2020.
SAM YEH/AFP/Getty Images

China long thought time was on its side with Taiwan, but a number of factors are now challenging that view.

For decades, China thought that when it came to Taiwan, time was on its side. As long as China’s power kept growing, and as long as it kept deepening integration with Taiwan while also maneuvering to isolate it from other nations, then eventually the Taiwanese would come to see that assimilating the country officially back into China was the only logical choice.

From 2008 to 2016, when Taiwan was led by President Ma Ying-Jeou, the Chinese were especially hopeful about this strategy. Ma was distinctly pro-China and the Taiwanese supported him. In recognition of this, China eased up on coercive methods of bringing Taiwan under its power, and instead began working to cooperate with the island at ever deeper levels and to boost all manner of social and cultural interactions between the two sides.

Why not substitute the stick for the carrot? Ma and the Kuomintang party he led were accommodating to Beijing. The Taiwanese were leaning toward China. And Taiwan was committed to the 1992 Consensus, which said the two sides agreed that there is only one China. That consensus did allow some choice regarding how exactly the One China model would be interpreted by each side. Despite this wiggle room, it built a framework within which the two could interact. So under Ma’s leadership, Taiwanese sentiments toward China were warming. And it looked like China had time to let them keep heating up until Taiwan was so melded into Beijing that it would peacefully unite under a “one country, two systems” model.

But in 2016, the people of Taiwan elected a new ruler: Tsai Ing-Wen. She and her Democratic Progressive Party (dpp) are pro-independence and pro-Taiwan. Tsai was riding a swell of resurgent dpp power, caused largely by a demographic shift underway in Taiwan, with each subsequent generation identifying more as Taiwanese and less as Chinese. The shift had accelerated after 2012 when Xi Jinping became China’s leader, and the Taiwanese saw that under him, China was growing more nationalistic, coercive and expansionistic.

Xi took the wiggle room out of the 1992 Consensus by strengthening the link between that framework and the notion of “one country, two systems.” This was an assertion that mainland Communist China was the one, true China into which Taiwan would be required to assimilate. Seeing this more forceful China sobered many Taiwanese and altered their view of Beijing. It caused even Ma’s Kuomanting party to back away from the 1992 Consensus and bolstered pro-independence sentiments across the island.

Tsai and the dpp began calling for a review of Taiwan’s constitution and began working to build deeper trade links between Taiwan and Western nations as well as with several Southeast Asian countries. She began deepening Taipei’s security ties with the United States and worked out deals to acquire massive amounts of American weaponry. The U.S. increased its number of patrols in the South China Sea and through the Taiwan Strait. France, the United Kingdom and others followed suit. Tsai also began tacitly rejecting the 1992 Consensus.

This January, Tsai was reelected with a landslide victory. With 57.1 percent of the vote, she was head and shoulders above all other candidates. And China looked on closely and furiously when U.S. Secretary of State Mike Pompeo congratulated Tsai on her reelection and specifically praised her determination to stand up to China.

In the months that have followed, China has grappled with debilitating economic shutdowns caused by the coronavirus that it unleashed on the world. But Taiwan has emerged as a white knight in the pandemic, containing it almost immediately with targeted quarantines, and helping other nations implement aspects of its successful strategy.

All of this made Taiwanese people more proud to be Taiwanese—and more fearful and disdainful toward China.

China for its part saw these moves as indications of a coming change in Taiwan’s security and international status. China saw it as Taiwan setting the stage for a potential switch from de facto independence to de jure independence: an openly sovereign Taiwan.

The possibility of such an outcome is anathema to Xi Jinping’s China for a number of reasons. It would obliterate the Chinese Communist Party’s cherished notion of declaring a final total success in the civil war that split China and Taiwan in the first place. Likewise, it would desicate the emotional concept of a historically greater and more powerful China that the Communist Party galvanizes its people with. Most importantly, a Taiwanese declaration of de jure independence would pose a clear threat to China’s national security.

Taiwan’s strategic location—about 100 miles off the Chinese coast—means it divides China’s near seas in two. Taiwan is part of the first island chain. That arc of landmasses stretching from above Japan all the way down to the Philippines and on down to Indonesia. In Chinese military doctrine, the first Island chain is an area of extreme importance. This is the region China absolutely must secure in the event of warfare, because the U.S. or other adversaries could otherwise potentially blockade China’s coast. Such a blockade would pose an existential threat to China because its export-dependent economy would be crippled. Even more importantly, it would threaten China’s ability to import the food, oil and gas that it depends on so heavily. For these reasons, the Chinese are dead set on being able to control everything between China and this island chain—including Taiwan.

Stratfor’s Rodger Baker wrote about this on June 11: “Taiwan is crucial for both any foreign containment strategy, and for China’s confidence and security in the East and South China seas—areas critical to China’s national defense, food security and international trade.”

So somewhat suddenly, time is no longer on China’s side regarding Taiwan. And China is now in the process of modifying its approach to Taiwan in a worrying way.

Baker pointed out that China has long used five main toolkits for its Taiwanese policy: incentivization, disruption, isolation, constraint and force. During the Ma years, China mainly used incentivization. It would occasionally employ disruption and isolation, but only selectively—to remind Taiwan how dark its days would be if China substituted its carrots for sticks.

Now though, under President Tsai and with so much anti-China sentiment building in Taiwan and with Taiwan’s ties to third-party nations growing stronger, China is tossing incentivization aside. It is now relying heavily on disruption, isolation and constraint. This is evident in the growing number of nations China has bribed into denying Taiwan’s sovereignty and its international space. We see it in the growing number of businesses that China forces—at the risk of losing access to China’s markets—into labeling Taiwan as a Chinese state on their maps. We see the constraint specifically in the way China is conducting a growing number of naval and air force training missions near Taiwan. China’s focus on constraint is also evident in its activities in the South China Sea, where it is building and militarizing islands and using them to actively shape the future battleground in a way that will block crucial sea routes. This will narrow Taiwan’s options and weaken its capacity to rely on intervention by external powers.

As China more clearly sees that time is not on its side, and that it must take action to prevent Taiwan from achieving formal independence, it is also increasingly contemplating the fifth toolkit: force.

Chine would rather avoid military confrontation over Taiwan. But the toolkit is open. And China is placing more advanced weapons, strategies and options into it each year. The cost of an invasion and occupation would be high for China. But as Baker noted, “[T]he balance has clearly tilted in favor of China, including even in several scenarios where the United States intervenes in a cross-strait conflict.”

In the months ahead, we should expect to see China continue using disruption, isolation and constraint in its Taiwan policy. And we should expect to see it continue making preparations to potentially use force: This includes strengthening its artificial islands so they can function as forward bases and allow China interdiction of maritime routes in the region. China will deploy more anti-ship and anti-air missiles, including hypersonic missiles that can strike Taiwan with debilitating power. China will also ramp up training drills for its aircraft carrier battle groups and various amphibious operations, and it will increasingly use its fisherman navy to keep a consistent presence in the locations it claims in order to demonstrate control over them. We could also soon see China attempt various methods of blockades in the region to disrupt other nations’ economic and security connections to Taiwan.

Eventually, China will absorb Taiwan. But this tragic event will not be because of China’s might, but because of America’s decline.

The Taiwanese have managed all these years to resist China’s five toolkits and to stay independent thanks mainly to military equipment, political support and security assurances from the United States. But the U.S. today is deeply divided and war weary. Its will to use its power in a meaningful way is basically broken.

In 1998, Trumpet editor in chief Gerald Flurry said America’s decline made it clear that it was only a matter of time before Taiwan would be swallowed up by China. In an article titled “Taiwan Betrayal,” he wrote:

How could anyone fail to see that Taiwan is destined to become a part of mainland China? These … people are going to be forced into the Chinese mold; and it is going to happen for one reason: because of a pitifully weak-willed America. Does freedom really mean so little to us?

Mr. Flurry explained that his assessment of the China-Taiwan-U.S. dynamic is based on a Bible prophecy recorded in chapter 26 of the book of Leviticus. This chapter says if America rejects God and becomes mired in sin, then its will to use its power will be broken (verses 14-19). In 1998, when he wrote his article, the concept of Taiwan being absorbed by China may have seemed possible only in a remote future. But today, with America weakening, and with China understanding that time is no longer on its side with Taiwan—and making preparations to use its growing power—it is easy to see how Mr. Flurry’s forecast could soon become reality.

To understand more about what lies ahead for China, Taiwan and all of Asia, order your free copy of Russia and China in Prophecy.