Don’t mistake Chinese fishermen as a ragtag band acting on its own. 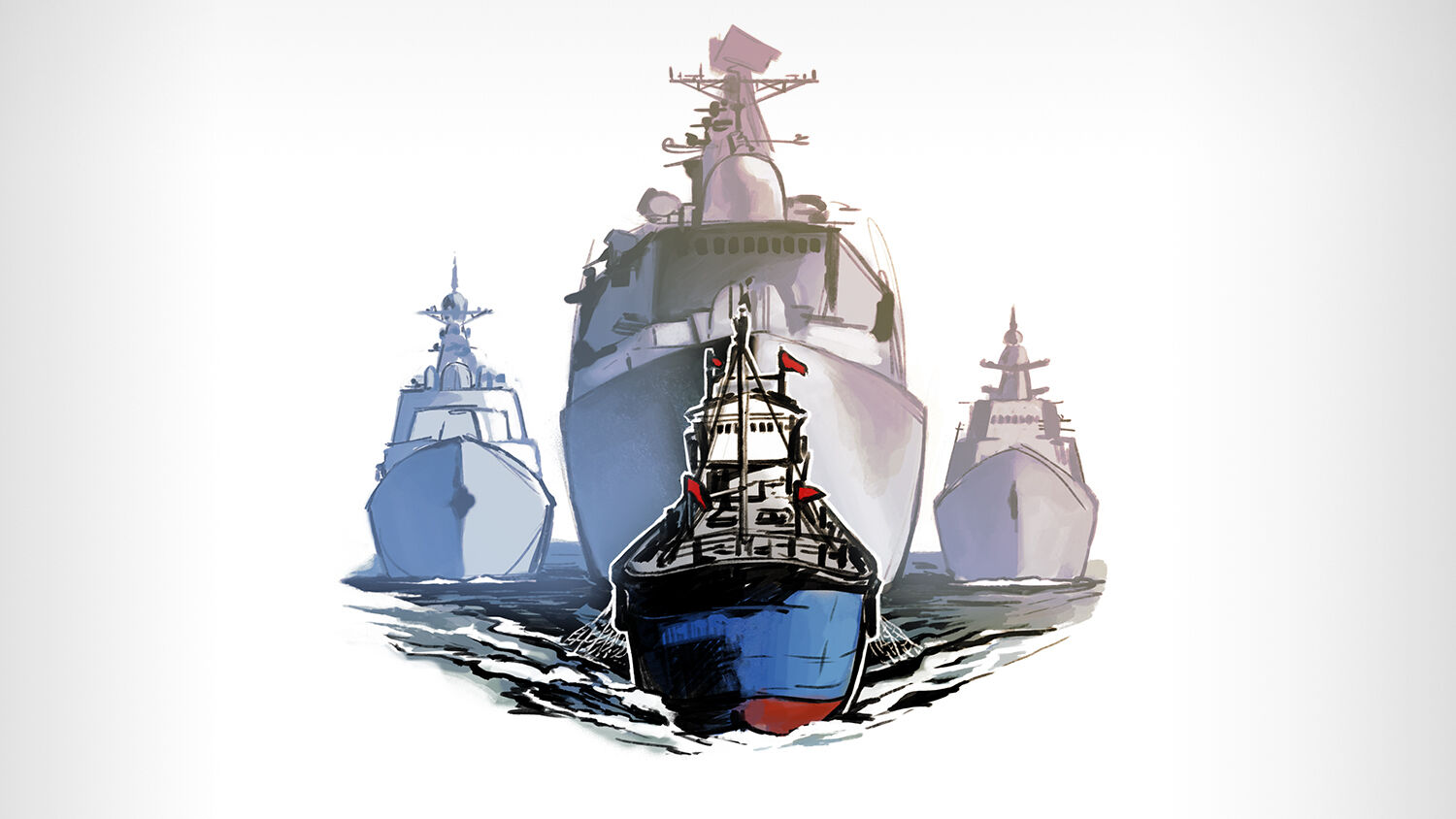 Don’t mistake Chinese fishermen as a ragtag band acting on its own.

“When our country needs us, we will go without a second thought to defend our rights,” said Chen Yuguo in an interview with the Washington Post (April 12, 2016).

If Chen were a sailor in China’s People’s Liberation Army Navy, or perhaps an officer of the Chinese Coast Guard, his pledge to use force for his country would not be particularly noteworthy.

But Mr. Chen is a fisherman.

Chen is one of China’s 6 million-plus fishermen. He captains a trawler from the port of Tanmen, one of the country’s 2,600 distant-water fishing ships.

And many of these vessels do more than just fish. China indeed “needs” them, as Chen said, but not to “defend China’s rights.” Instead, the Chinese government uses its huge fishing fleets to take control of territory that does not rightfully belong to Beijing.

Analysts commonly acknowledge that, in terms of number of ships, China has both the largest navy in the world and also the largest coast guard. Less frequently acknowledged is that these two official maritime forces are reinforced by the world’s largest fishing fleet.

This fleet is more consequential than it might seem.

“This is in no way a collection of innocent, random, patriotic fishermen,” said Andrew Erickson, a professor of strategy in the United States Naval War College’s China Maritime Studies Institute. “China likes to have that camouflage and likes to mis-portray it in that way,” he said, “but it is not the case at all.”

Erickson said much of China’s fishing fleet functions as a “maritime militia.” They are “trained, equipped and organized directly by the pla’s [People’s Liberation Army’s] local military commands,” Erickson said. “[I]t answers to the very top of China’s centralized bureaucracy: Commander in Chief Xi Jinping himself.”

Christopher Rawley, a U.S. Navy Reserve captain and a member of the board of directors of the Center for International Maritime Security, agrees. The U.S. Naval Institute paraphrased him as saying, “When you look at the thousands and thousands of fishing boats operating out of China, you really should consider them a third arm of Beijing’s naval presence” (Aug. 17, 2016).

Beijing uses this “third arm” as the advance guard to fight its expansionist battles in the South China Sea and beyond. And the fishing fleet’s involvement in China’s battles is not rare. “Local fishermen have assisted more than 250 law enforcement operations at sea over the past three years,” the state-run China Daily reported in 2016. Since then, such instances have become even more frequent.

The fishermen are happy to play their role despite inherent dangers: Besides catching more fish in the contested waters than they would in the depleted areas off China’s coast, the fishermen also feel they are fulfilling their patriotic obligation: “It is our water,” Chen said, referring to almost the entire South China Sea. “But if we don’t fish there, how can we claim it is our territory?”

The basic strategy, according to international security expert Alan Dupont, happens in this sequence: First, fishing boats enter disputed waters and confront other nations’ vessels; then the Chinese Coast Guard steps in; next come land reclamation projects; and it ends with militarization and domination. Dupont calls the process “fish, protect, occupy and control.”

Evidence shows the strategy is working.

Scarborough Shoal lies 120 nautical miles from the Philippines, well within its “Exclusive Economic Zone,” according to international law. The United Nations Convention on the Law of Sea recognizes that each nation has exclusive rights to the waters up to 200 nautical miles from its coastline. Yet if a Filipino fisherman today wants to fish in Scarborough, he must gain the permission of Chinese authorities.

This has not always been the situation. In 2012, the Philippine Navy caught a group of Chinese fishing ships anchored at Scarborough Shoal, some 550 miles from the closest Chinese land. Philippine authorities boarded the vessels and found considerable quantities of endangered marine species. But before they could make any arrests, two Chinese Coast Guard ships arrived and worked with the fishing vessels to cordon off the mouth of the lagoon.

A 10-week-long standoff ensued. Throughout the period, vessels from the pla Navy floated on the horizon, sending the Philippines a silent signal of the force Beijing was willing to use. Finally, the U.S. brokered what it believed was a deal for both sides to withdraw and return to the status quo ante.

As stipulated by the agreement, the Philippines pulled out. But China did not honor its end of the bargain. Instead, it kept its vessels at Scarborough Shoal, and they remain there to this day on patrol.

“[T]here was no question that Beijing had scored a tactical victory at Manila’s expense by successfully seizing and occupying the disputed area,” wrote Ely Ratner, deputy director of the Center for a New American Security’s Asia-Pacific Security Program (National Interest, Nov. 21, 2013). Ratner and other analysts agree that if China had captured Scarborough with overt military or coast guard vessels, it would have likely prompted a weightier response from the U.S. and considerable international backlash. But since Beijing used nonmilitary vessels as the front line, the skirmish remained in a gray zone.

And the gray zone, where nations conflict without breaking into conventional warfare, is precisely where China wants such territorial clashes to take place.

After China’s victory was clear, state media lauded the fishermen as an “advanced militia unit.” President Xi personally praised them and advised the fisherman fleet to more actively back China’s “island and reef” development projects.

On May 2, 2014, China positioned its hysy 981 offshore oil rig in waters near the Paracel Islands, about 120 miles from Vietnam’s coast. Vietnam decried the move as a clear infringement of its sovereignty and sent 29 ships to the area to challenge it.

But China’s pla Navy, Coast Guard and fishing fleet formed a 10-nautical-mile cordon of 80 vessels around the oil rig, forcibly repulsing the Vietnamese. “All three of China’s sea forces were there,” Erickson said, adding that “they were all communicating and coordinating and they were acting together in a relatively effective manner.”

Over the next few weeks, a standoff took place and each side reported being rammed and water-cannoned by the other nation’s vessels. On May 26, a large, steel-hulled Chinese fishing boat was caught on video ramming and sinking a smaller Vietnamese fishing boat. Eight crewmen were thrown into the sea; two had to swim out of the cabin through a window that had broken during the attack.

The incident marked a dramatic escalation in the standoff. If China had sunk the Vietnamese vessel with a pla Navy or Coast Guard ship, the matter would almost certainly have provoked a meaningful response from the U.S. or other nations. But since Beijing was able to claim that the fishermen who sunk the ship were acting independently and only in self-defense, there was little kickback. China was able to leave the rig in the region, harvesting Vietnam’s oil, as long as it chose to.

The Diplomat said the hysy 981 standoff allowed China to achieve its “primary goals of broadcasting to its neighbors that a rising Vietnam alone could not stop it and the U.S. would not intervene” (Aug. 30, 2014). Another victory for Beijing thanks in large part to its fishing fleet.

A Page From Putin’s Playbook

Two months before the hysy 981 standoff, Russian President Vladimir Putin pried the Crimean Peninsula away from Ukraine and grafted it into Russia. Putin did not accomplish this illegal land grab with an overt military invasion. Instead, he sent Russian soldiers into Ukraine with the insignia removed from their uniforms and the signage taken off their vehicles.

By not deploying regular troops, the Russian government had a degree of deniability, which hindered potential challenges. “Were they mercenaries? Could it be Crimean vigilantes? Or was this some unsanctioned adventure by a local commander?” asked Russian security affairs specialist Mark Galeotti. “[T]he lack of insignia on these ‘little green men’ and Moscow’s flat denial that they were Russian troops was enough to inject a moment’s uncertainty into the calculations in both Kiev and nato. [A]nd Russia was able to seize Crimea without a single fatal casualty.”

By the time of the Crimean annexation, China had already been using the “little blue men” of its fishing fleet as the advance guard to assert its expansionist territorial claims. But Putin’s success in Crimea may well have spurred the Chinese leadership to increase such hybrid warfare tactics.

Using “little blue men” not only gives China deniability, but the quasi-civilian status of the fishermen complicates the rules of engagement for U.S. naval vessels, for coast guard personnel from the Philippines, Vietnam and South Korea, and for any other official government entity trying to combat the illegal behavior.

These shadowy, hybrid war tactics have helped China and Russia to successfully expand their domination; both nations will likely continue using them.

‘Steering the World Toward War’

Many analysts are not overly alarmed by China’s increasing assertiveness in the South China Sea and elsewhere. As Ratner said, “From their vantage point, accommodation is preferable to risking war over ‘a bunch of rocks’” (op cit).

But Trumpet editor in chief Gerald Flurry has said that China’s takeover in this region is “steering the world toward war.” In our July 2016 issue, he wrote about the Spratly Islands, which are claimed by China, the Philippines, Malaysia, Taiwan and Vietnam. These islands are the main location where Chen Yuguo and numerous other fishermen currently focus on asserting Chinese dominance.

“China is ignoring these nations’ territorial claims,” Mr. Flurry wrote. “China is being aggressive and provocative,” and thereby challenging “seven decades of American naval dominance in the Pacific Rim.” This aggressive behavior “should alarm the world!” he wrote.

Speaking of the South China Sea, through which a third of the world’s maritime commerce passes each year, Mr. Flurry wrote, “Since Japan’s defeat in World War ii, America has protected this vital trade route and brought peace to this part of the world.” But since the U.S. military is now retreating from the region, “other great powers are coming in to fill the vacuum,” he continued. “China is intimidating the nations of Southeast Asia into submission to its will. It is forcing these countries to do what it wants. Everything is headed in the direction of war.”

Mr. Flurry’s assessment of the South China Sea situation is based on the sure word of Bible prophecy.

In the book of Deuteronomy, God issues a solemn warning to the people of Israel, explaining that if they reject Him, He will hand control over the world’s strategic sea gates to their enemies. And He warned that these enemy nations would use that control to besiege the nations of Israel: “And he shall besiege thee in all thy gates, until thy high and fenced walls come down, wherein thou trustedst, throughout all thy land …” (Deuteronomy 28:52).

Mr. Flurry explained that this ancient warning is not just for ancient peoples. “It is a prophecy for the modern-day descendants of Israel!” he wrote. “Two nations in particular represent Israel in this end time: America and Britain.” These two countries “are full of terrible sins today, and God is going to correct them for that!” he wrote. “This prophecy and several others show that He will send foreign enemies to punish America and Britain!”

But Mr. Flurry made clear that this approaching besiegement and war is connected to some astoundingly hope-filled news: “All this prophesied destruction is what it will take for God to reach this world!” he concluded. “After this, people will be ashamed—and they will get to know God! Ezekiel repeatedly talked about that inspiring conclusion (e.g. Ezekiel 6:7; 7:4; 11:10; 12:20; 13:9; 23:48-49; etc). Yes, there is a lot of bad news when you consider what it takes to get people to the point of knowing God. But ultimately, the outcome is spectacularly good news!”