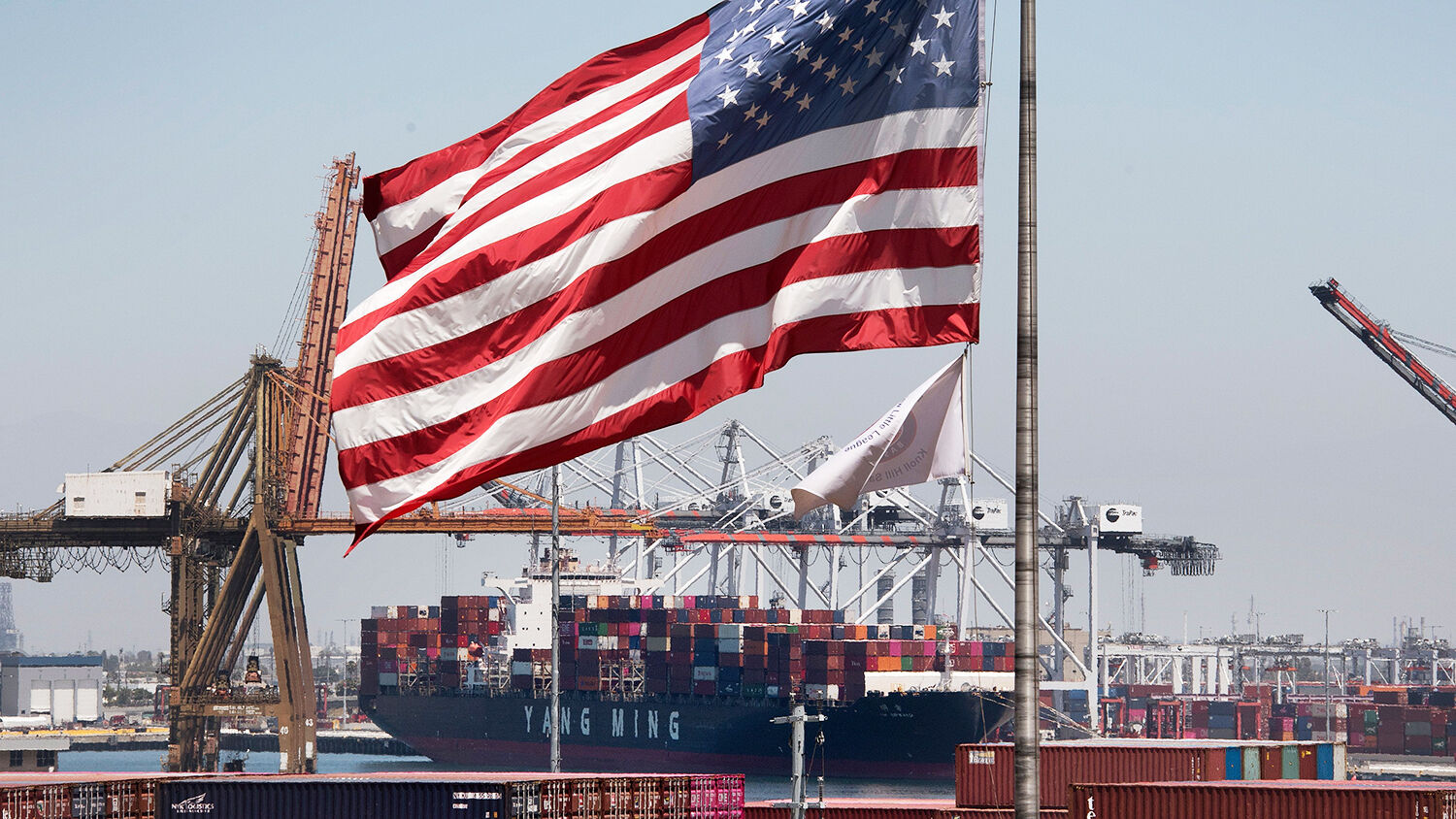 The U.S. flag flies over a container ship unloading its cargo from Asia at the Port of Long Beach, California, on August 1.
Mark Ralston/AFP/Getty Images

According to President Trump, the measures were taken because Chinese President Xi Jinping is “not going fast enough” in increasing his country’s purchases of U.S. agricultural goods and in preventing Chinese criminals from trafficking fentanyl into America.

…during the talks the U.S. will start, on September 1st, putting a small additional Tariff of 10% on the remaining 300 Billion Dollars of goods and products coming from China into our Country. This does not include the 250 Billion Dollars already Tariffed at 25%…

China has responded to the new tariffs by ordering state-owned businesses to cease purchasing U.S. agricultural products altogether. Earlier in the week, China caused its currency to fall below 7 yuan to the dollar, which economics commentator Jeremy Warner said was essentially a declaration of “all-out economic war on Donald Trump’s America.”

China also seems to be preparing for the possibility of an economic decoupling from the U.S. by increasing its domestic consumption and thus self-sufficiency, and by boosting trade with other countries.

President Trump, likewise, has doubled down, saying China will be “taxed” until it agrees to a fair deal. But while China suffers from high tariffs, the U.S. could also suffer losses from China’s weaponization of its currency, blacklisting of U.S. companies, and restriction of rare earth materials exports, which are vital to the U.S. defense industry.

As trade tensions rise with China, America’s relationship with the European Union is also worsening. Disputes over recent airline subsidies, digital taxes and U.S. sanctions on Iran have strained ties between America and Europe. As Europe drifts further from America, it draws closer to Asia, specifically, China.

Trade relations between Europe and Asia have vastly improved in recent years, with annual merchandise trade today reaching $1.5 trillion, compared to $312 billion in 1994. Germany and China are, according to the Word Economic Forum, “the main trade bridges between the two continents.” China is the largest consumer of German goods, and more than half of China’s exports go to Germany. Europe is also deepening its trade ties with another Asian economic giant.

On February 1, Japan and the EU signed a historic trade deal that will cover over a third of the global gross domestic product and more than 600 million people. Consequently, Asia and Europe now trade more with each other than with the U.S.

The most positive trade relationship the U.S. seems to have is with Britain. The two are pursuing a “substantial” trade deal, which, according to U.S. Ambassador to Britain Woody Johnson, will “reflect lower tariffs, lower regulations and even lower taxes to increase trade exponentially.” The current deal between the two nations is worth about $260 billion a year; the potential deal is thought to be worth four or five times more.

US Secretary of State Mike Pompeo reiterates that the US will be ready to sign a trade deal with the UK “however #Brexit ultimately shakes out”.

The result of all these developments is that global economic networks are beginning to take shape along the lines of Bible prophecy. The Trumpet and its predecessor newsmagazine, the Plain Truth, have watched and reported on these developments for decades. In 1968, Plain Truth editor in chief Herbert W. Armstrong wrote that “a virtual trade war will get underway against the United States and Britain.”

His prediction was based on Bible prophecy. Isaiah 23 describes Chittim (China), Tarshish (Japan) and Tyre (German-led Europe) having an interdependent economic relationship called “the mart of nations.” In our free booklet Russia and China in Prophecy, we write:

The Prophet Isaiah discusses a powerful “mart of nations” that includes both European and Asian nations, including Russia, China and Japan (Isaiah 23). Events are moving toward the fulfillment of this prophecy.

Current events are aligning with biblical forecasts before your eyes.

While U.S.-China relations worsen, the nations of Asia and of Europe are forging deeper economic ties and forming vast trade networks. America and Britain will not be part of this coming global trade network. In his article “Trade Wars Have Begun,” Trumpet contributing editor Brad Macdonald wrote:

Clearly, [Isaiah 23] is a prophecy about an end-time trade axis between Europe and Asia! Notice too: America and Britain are not part of this “mart of nations”! Why not? Because this trade emporium is a rival of the U.S. and Britain. It is infused with strong anti-American and anti-British sentiment. This “mart of nations” exists to compete with America and Britain! … Prophecy indicates that the German-led European Union will soon join forces with Russia, China and Japan to shut the U.S. out of more and more markets (see Isaiah 23).

In Ezekiel: The End-Time Prophet, Trumpet editor in chief Gerald Flurry writes that America and Britain will be “literally besieged—economically frozen out of world trade” as the mart of nations unites and begins “calling the shots in world commerce.”

History shows that economic conflict is often a prelude to military conflict. And present tensions are currently reaching an all-time high. According to the Australian Strategic Policy Institute (emphasis added):

Economic warfare is being fought with an intensity not seen since the period leading up to World War ii, as countries deploy tariffs, embargoes and economic sanctions to force policy changes or punish their adversaries …. While the escalation of tariffs between the U.S. and China has been the greatest concern to economists and institutions like the International Monetary Fund, the use of economic sanctions is becoming increasingly aggressive and extends far beyond [United Nations] Security Council mandates.

The alarming news is that these trade wars indeed are a prelude to catastrophe! The Bible prophesies that the nations of Europe and Asia will successfully form powerful trade blocs that exclude the U.S. and Britain; they will go on to economically besiege America and Britain. And from there, all-out war will erupt. In Ezekiel: The End-Time Prophet, Mr. Flurry writes that the economic siege “leads to an attack that will leave cities without inhabitant!”

The Bible shows where today’s fomenting hostilities are leading and the devastation they will bring. However, it also promises that just beyond that devastation there will be an age of peace, joy and happiness under the righteous leadership of Jesus Christ.

To find out more about trade wars, how they will lead to World War iii, and the immense hope that lies beyond the devastation, request your free copy of Mr. Flurry’s book Ezekiel: The End-Time Prophet.