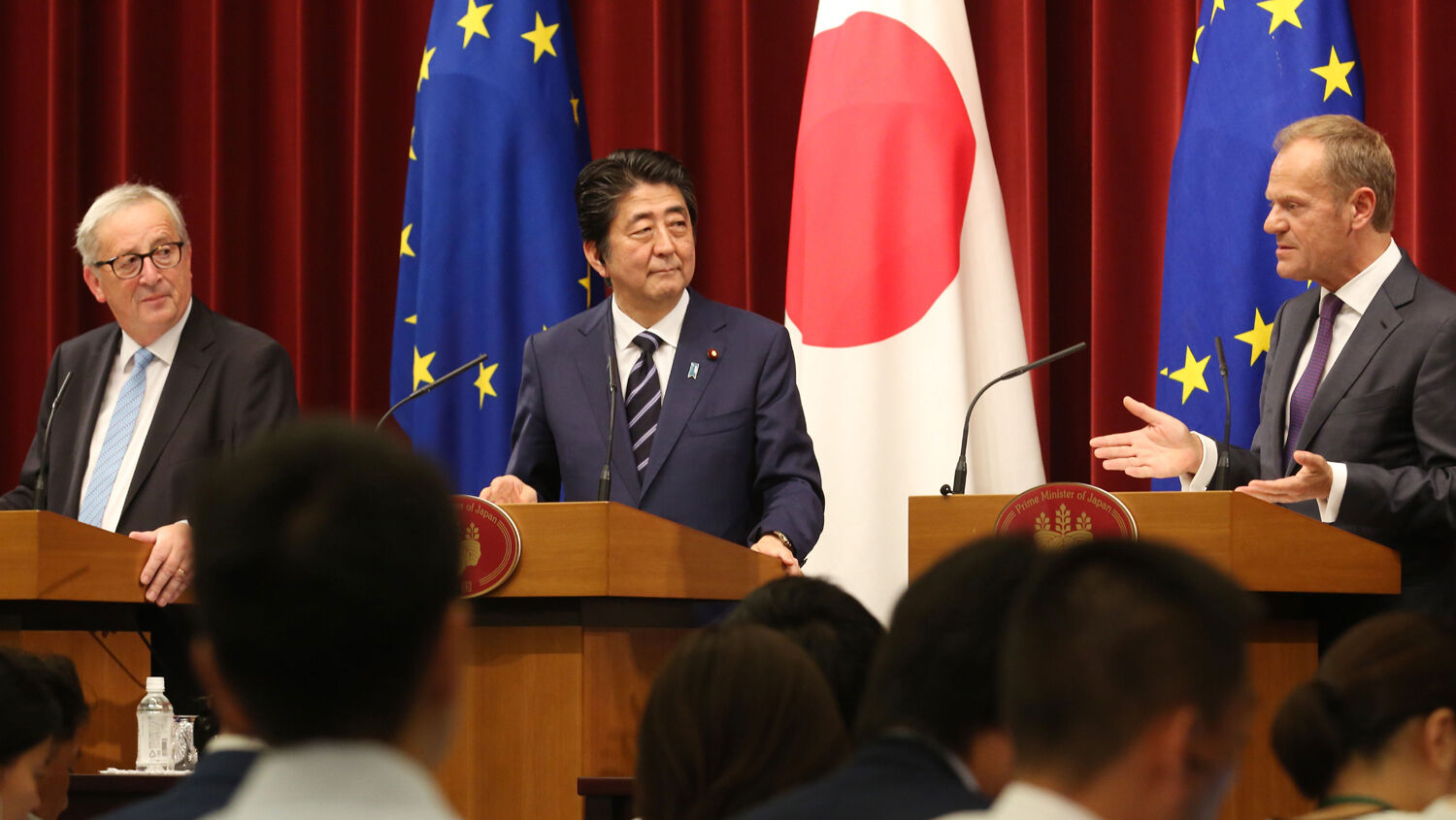 Immense deal covers about a third of the global economy and affects 600 million people.

The European Union and Japan signed a historic free-trade deal on July 17 in Tokyo that will remove or reduce all tariffs on exports between Europe and Japan. The EU-Japan Economic Partnership Agreement (epa) will create the world’s largest open economic area, covering about a third of the global economy and affecting about 600 million people. The immense trade deal emphasizes the growing economic unification between Europe and Asia as the world reacts to America’s increasing protectionism.

President of the European Council Donald Tusk celebrated the agreement as “the largest bilateral trade deal ever.” The deal will come into force in 2019, once the European Parliament and Japanese Diet approve it. In the deal, the EU agreed to remove its 10 percent tariff on Japanese cars and its 3 percent tariff on Japanese car parts. Japan agreed to remove its tariffs on EU food and wine, which sometimes exceeded 30 percent.

Along with the free-trade agreement, Japan and the EU negotiated a data protection agreement on July 16. In that agreement, they agreed to trust that their data protection systems are equal. This recognition of “reciprocal adequacy” will allow the unrestricted flow of data between the EU and Japan. According to the European Commission’s press release, this creates “the world’s largest area of safe data flows.”

The epa and data protection agreements have been in negotiations for several years. However, the EU and Japan pushed the trade agreement forward in response to recent U.S. tariffs on steel, aluminum and other goods. The planned U.S. tariffs will hit Europe and Asia particularly hard, since both regions rely heavily on exports. China leads the world in exports, followed by the U.S. Germany ranks third, and Japan is fourth. Viewed as a whole, however, the EU is the undisputed leader in global trade. As such, it stands to lose the most from U.S. tariffs.

The EU has already imposed retaliatory tariffs on the United States. Japan has threatened similar action. China and the U.S. are waging an intense tit-for-tat tariff war. But U.S. tariffs have created more than just retaliatory tariffs. They have contributed to pushing nations like Japan and China to deepen their economic relationships with Europe. As the U.S. takes a stand, Europe and Asia are uniting to fight back.

Both Japanese and EU leaders were aware of the symbolic meaning behind the trade deal. After the deal was signed, Japanese Prime Minister Shinzō Abe said, “There are rising concerns about protectionism, but I want Japan and the EU to lead the world by bearing the flag of free trade.”

Tusk commented, “We are sending a clear message that we stand against protectionism. The EU and Japan remain open for cooperation.” Clearly, Japan and Europe are both trying to present themselves as a foil to the U.S., which they portray as the enemy of free trade.

During U.S. President Donald Trump’s recent visit to Europe, he emphasized his irritation with the EU’s high tariffs on American goods, which existed long before his recent steel and aluminum tariffs. In an interview with Guardian Unlimited in Scotland, the president called the EU a “foe” because of its unfair trade practices. He said that the EU has been taking advantage of America for years with high tariffs. President Trump’s comments brought a lot of criticism from EU chiefs. Tusk responded with a tweet: “America and the EU are best friends. Whoever says we are foes is spreading fake news.”

America and the EU are best friends. Whoever says we are foes is spreading fake news.

Both Tusk and European Commission President Jean-Claude Juncker used the signing of the trade deal as an opportunity to denounce America’s actions. Juncker said that the EU-Japan deal was “much more than a trade agreement”—it was a “statement” against protectionist trade practices. Tusk agreed, calling the deal “a light in the increasing darkness of international politics.”

Tusk told reporters after the deal was signed: “We are predictable—both Japan and [the] EU—predictable and responsible, and will come to the defense of a world order based on rules, freedom and transparency and common sense. And this political dimension is even more visible today, tomorrow, than two months ago, and I am absolutely sure you know what I mean” (emphasis added throughout).

President Trump’s slogan is “America First.” But as the Washington Post put it, “America First” may end up meaning “America Alone.” America’s former allies are uniting against it.

The current situation should sound familiar to long-time readers of the Trumpet. The Bible prophesies that in the end time, the United States will be isolated and besieged through a trade war. That trade war has begun. Isaiah 23 describes a Eurasian “mart of nations” that will oppose the U.S. This prophecy uses the ancient names of the nations that represent German-led Europe, China and Japan today. Deuteronomy 28 foretells the besiegement of the U.S. by this Eurasian trade alliance.

Tusk commented at the Tokyo summit that EU-Japan relations “have never been stronger.” He said, “Geographically, we are far apart. But politically and economically we could hardly be any closer.” That is a thrilling statement for students of Bible prophecy. Europe and Japan are strengthening their economic relationship. Germany and China have also increased their trade ties recently in an attempt to ease the pressure from U.S. tariffs. How much more will it take before Europe and Asia decide to join forces against the U.S.?

Trumpet editor in chief Gerald Flurry wrote in Ezekiel: The End-Time Prophet that a coming trade bloc consisting of Europe and Asia will begin calling the shots in world commerce, besieging America and Britain, and cutting them out of world trade!

Today, we are watching the “mart of nations” developing. This EU-Japan trade deal is another step toward that prophesied Eurasian trade bloc.

To understand more about this prophesied trade alliance, read “Trade Wars Have Begun.”