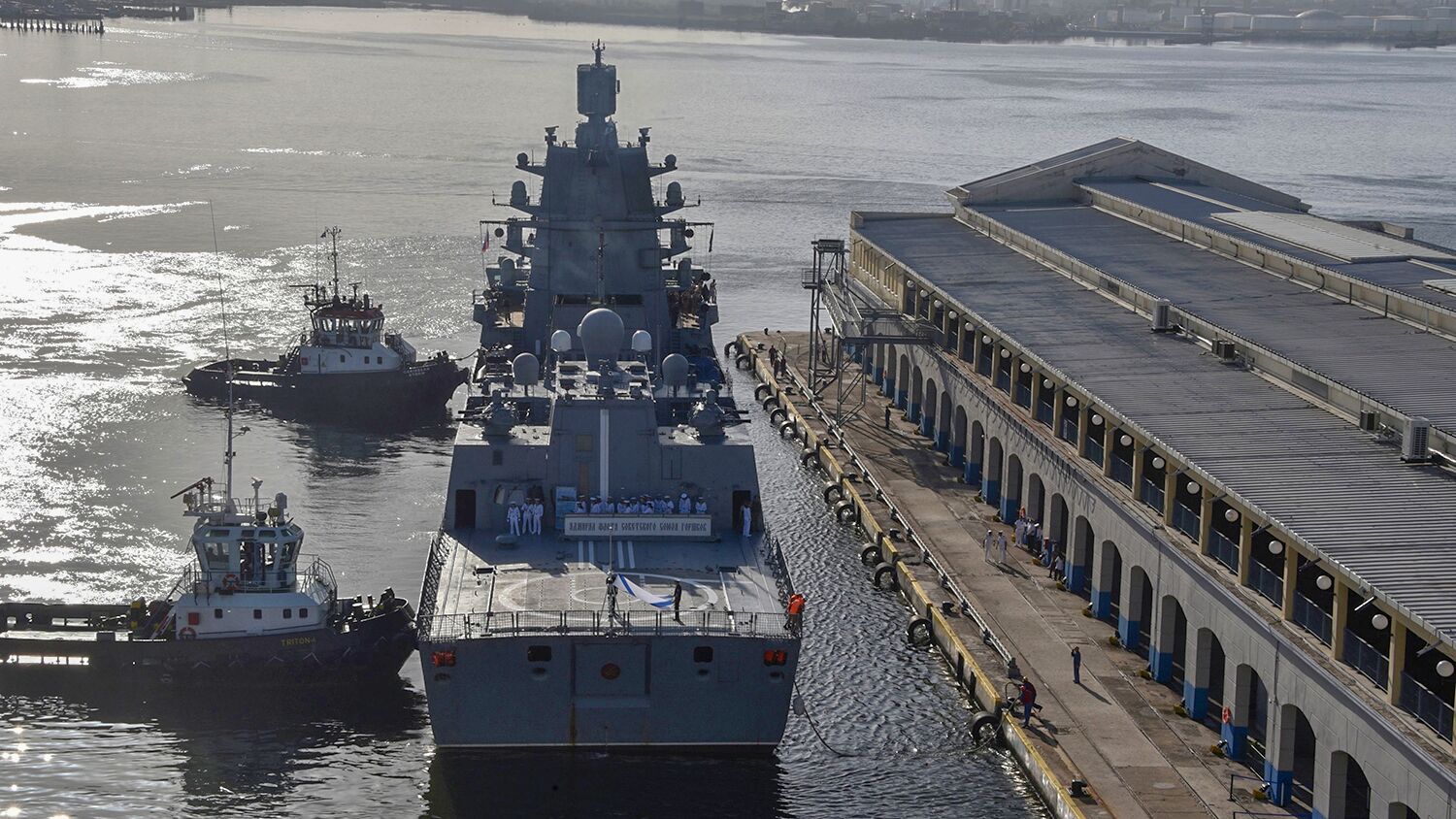 Russian forces are about 8,000 miles from home—and within 90 miles of Florida.

A fleet of Russian warships traveled through the Caribbean Sea and docked in Cuba on June 24 in the latest example of Russia’s increasing military influence in the periphery of the United States.

The four-vessel fleet is led by Admiral Gorshkov, Russia’s most advanced and modern warship. The ships left Russia in February and made stops in Africa, Sri Lanka and China before crossing the Pacific to Ecuador. The fleet sailed through the Panama Canal on June 17, then crossed through the Caribbean to Havana’s harbor—just 90 miles from the southernmost part of Florida.

The frigate “Admiral of the Fleet of the Soviet Union Gorshkov” project 22350 Russian Navy arrives in Havana (Cuba), 06/24/2019 © EFE pic.twitter.com/wleLNvhlEg

The Russian government has not announced the purpose of the visit to Cuba, but Deputy Foreign Minister Sergei Ryabkov said on June 24 that current tension between the United States and Russia could create a scenario similar to the Cold War Cuban missile crisis. That crisis took place in 1962 when the Soviet Union retaliated for a U.S. deployment of nuclear weapons in Turkey by sneaking missiles into Cuba, causing a standoff that brought mankind a blink away from nuclear war.

Russia has vehemently criticized the U.S.’s withdrawal this year from the Intermediate-Range Nuclear Forces Treaty, as well as U.S. plans to deploy new missile systems to Eastern Europe. “If things get as far as an actual deployment on the ground of these sorts of systems,” Ryabkov said to the ria Novosti news agency, “then the situation won’t just get more complicated, it will escalate right to the limit. We could find ourselves in a situation where we have a rocket crisis … close to the Caribbean crisis.”

Russia’s evoking of the Cuban missile crisis is particularly sobering, given that Admiral Gorshkov is equipped with nuclear-capable Brahmos cruise missiles. Fired from Cuba, a Brahmos could strike targets in the U.S. in just six seconds.

Russia’s port of call in Havana is only the latest instance of the nation boosting its military power near America’s shores.

In November, the Kremlin gave Cuba $50 million to buy Russian military gear and pledged to strengthen ties with Havana. Russian Col. Gen. Vladimir Shamanov said at the time that Russia would take practical steps to increase its military presence in Cuba.

Meanwhile, Russia has recently sold Nicaragua tanks, patrol boats, missile corvettes and light fighters. An estimated 90 percent of Nicaragua’s weapons imports are from Russia. Historian Armando Chaguaceda wrote in March that Russia’s collaboration with Nicaragua today is “at its highest point since the collapse of the Soviet Union, extending itself as much into the civil sector as that of security and mutual diplomatic support.”

The pattern is clear. Russia has reemerged in Latin America and is quickly forging military relationships with unstable, anti-U.S. nations run by Communist or socialist governments. The proximity of these nations to the U.S. mainland should sound alarm bells in Washington.

The Trumpet addressed the danger of this trend in a March article titled “Preparing to Storm America’s Castle.” We wrote:

As disturbing as this sounds, Bible prophecy shows that such a besiegement will soon come to pass.

Some 2,700 years ago, God inspired the Prophet Isaiah to write about a vast trade bloc that would form in our lifetime: “a mart of nations” (Isaiah 23:3).

Verse 1 shows that a lead nation in this trade bloc would be “Chittim.” Trumpet editor in chief Gerald Flurry explains in his booklet Isaiah’s End-Time Vision that Chittim, or Kittim, is an ancient name for the peoples that make up modern China. Another leading member in the trade bloc is “Tyre,” which Mr. Flurry explains represents “the commercial center” of modern Europe. A companion passage in Ezekiel 27 mentions ancient names for Russia (Tubal and Meshech), showing that Vladimir Putin’s Russia will also play a key role in this future “mart.”

“The Bible contains many prophecies of that European power attacking America—and many other prophecies of America being besieged,” Mr. Flurry writes. Europe will carry out this history-altering besiegement in conjunction with the other nations associated with the “mart of nations” of Isaiah 23 and Ezekiel 27, including Russia. Mr. Flurry states, “All of them are going to besiege America, Britain and the Jewish nation.”

Mr. Flurry draws particular attention to the Latin American region, due mainly to its proximity to the United States. “Herbert Armstrong long prophesied, and we expect, the alliance between Europe and South America to grow extremely strong,” he writes. Europe already wields considerable influence in parts of Latin America. And after Russia and China form a “brief alliance” with Europe, the power that Russia and China are now building in Cuba, Venezuela, Nicaragua and elsewhere in Latin America will translate into even greater European control over the region.

These are sobering prophecies, revealing that America and some of its allies will soon suffer major calamity. But Bible prophecy shows that the “mart of nations” and the conflict associated with it are designed as loving correction from God, and that it will be immediately followed by an epoch of unprecedented worldwide peace. “[T]hat trading partnership won’t last long,” Mr. Flurry writes. “Soon they will clash, just before Jesus Christ returns and destroys both of them” (op cit).

Christ will return to Earth and bring in an age of stability and prosperity for the peoples of Russia, Cuba, Venezuela, Nicaragua, the U.S. and all other countries. To understand more about these trends and the hope beyond, order your free copy of Mr. Flurry’s booklet Isaiah’s End-Time Vision.