A foreign power that controls the Caribbean Sea could cripple the U.S. economy.

By Andrew Miiller and Jeremiah Jacques 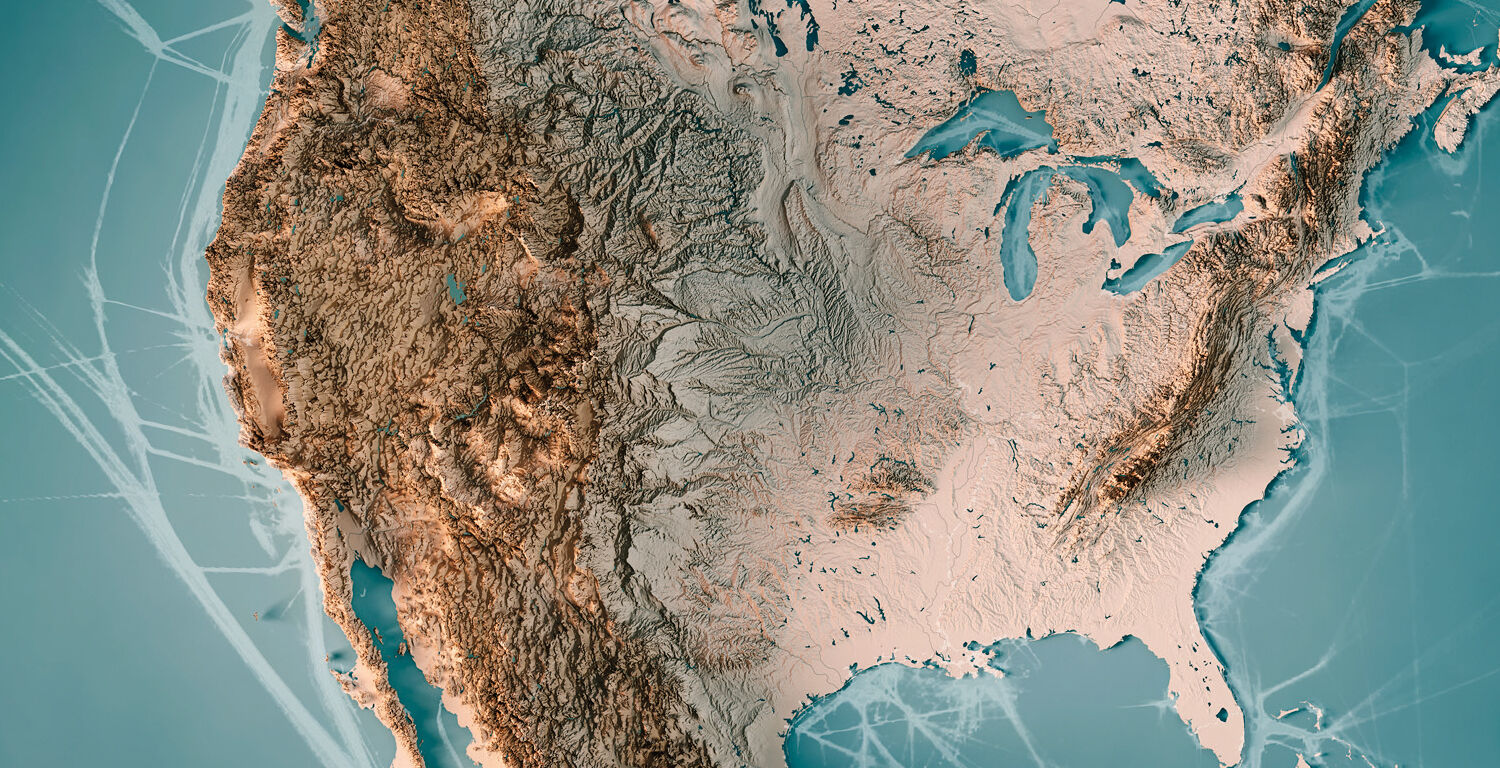 A foreign power that controls the Caribbean Sea could cripple the U.S. economy.

By Andrew Miiller and Jeremiah Jacques

This geographic reality is why Russia and China want to challenge U.S. dominance in the Caribbean. These aspiring superpowers are forging alliances with socialist governments in Cuba, Nicaragua and Venezuela. If these Latin dictatorships become staging grounds for Russia and China, a coalition of nations could potentially cut off U.S. access to the Panama Canal and seal off the Straits of Florida and the Yucatan Channel.

As shocking as this scenario sounds, the Bible reveals that enemies will seize control of the world’s most strategic maritime choke points and lay siege to the United States. America is going to lose access to the Panama Canal, the Straits of Florida, the Windward Passage, the Yucatan Channel and many other shipping lanes that its people rely on for food, electronic components, oil, raw materials and other goods.

The results will be devastating.

U.S. National Security Adviser John Bolton addressed a group of Cuban and Venezuelan refugees at the Freedom Tower in Miami on Nov. 1, 2018. He pledged to push back against dictators in Latin America.

“In Cuba, Venezuela and Nicaragua, we see the perils of poisonous ideologies left unchecked, and the dangers of domination and suppression,” he said. “This troika of tyranny, this triangle of terror stretching from Havana to Caracas to Managua, is the cause of immense human suffering, the impetus of enormous regional instability, and the genesis of a sordid cradle of communism in the Western Hemisphere.”

Bolton didn’t announce specific actions against Nicaragua, but the Trump administration has already levied sanctions against Cuba and Venezuela. These economic sanctions have weakened the corrupt governments of these nations. They have not, however, prevented them from seeking help from Russia and China. During the Cold War, the Soviets established relations with Cuba and Nicaragua in an effort to threaten U.S. access to the Panama Canal. Now the Russians and Chinese are resuscitating this plan to undermine America.

“This troika of tyranny, this triangle of terror stretching from Havana to Caracas to Managua, is the cause of immense human suffering, the impetus of enormous regional instability, and the genesis of a sordid cradle of communism in the Western Hemisphere.”

Russia offered Cuba a $43 million loan in November to buy Russian military equipment, and it vowed to expand “strategic” ties with the island. On Oct. 10, 2018, Newsweek reported a senior Russian official as saying that Russia is considering building a military base in Cuba. This would be the first Russian base in Cuba since the Kremlin closed a Soviet-era electronic spying outpost near Havana in 2001.

Meanwhile, two Russian nuclear-capable bombers flew a patrol over the Caribbean on Dec. 12, 2018, from a base in Venezuela. After this alarming incident, one Russian daily, Nezavisimaya Gazeta, suggested that Russia establish a permanent military presence on the island of La Orchila, northeast of Venezuela’s capital city. The Russian government-owned tass news agency said this presence would “represent one of the largest semipermanent deployments of Russian military equipment in the region since the 1962 Cuban Missile Crisis, which marked the height of the Cold War.”

Russia is also helping to modernize the Nicaraguan military. At the same time, China is signing economic agreements with Cuba, Nicaragua, Venezuela, Barbados, Grenada, Guyana, Haiti, Jamaica, Panama and other nations. These are steps toward establishing a strong economic and military presence in America’s backyard.

At present, neither Russia nor China has the naval power to challenge the U.S. in this region. But what happens when a financial crunch forces the U.S. to drastically cut military spending? There are strong signs this will happen, and soon—at which point the alliances Russia and China are forging in the Caribbean Sea will give them great power over America.

One specific prophecy likens end-time Israel to a hedged vineyard, protected on all sides, until God removes the hedge. “… I will tell you what I will do to my vineyard: I will take away the hedge thereof, and it shall be eaten up; and break down the wall thereof, and it shall be trodden down: And I will lay it waste: it shall not be pruned, nor digged; but there shall come up briers and thorns: I will also command the clouds that they rain no rain upon it. For the vineyard of the Lord of hosts is the house of Israel …” (Isaiah 5:5-7).

This description of a hedged vineyard fits no nation better than it does the United States.

About 57 percent of U.S. seaborne exports flow out of the Mississippi Basin to international markets via the Gulf of Mexico and the Caribbean Sea. Cuba lies between Florida and the Yucatan Peninsula, an enormous gatehouse between the U.S. heartland and the outside world (see map, page 18).

The threat of a naval blockade against the Mississippi Basin is why the U.S. supported Cuba’s independence from Spain and took over the island as a protectorate upon winning the Spanish-American War in 1898. It is why the Soviets tried to use Cuba against the U.S., and why the U.S. tried to oust the Soviet Union from Cuba in 1962.

Now the U.S. is allowing Russia and China to forge alliances with Cuba, Nicaragua and Venezuela. This is setting the stage for a time when an alliance of hostile nations will finally lay siege to America and refuse to let shipments pass the gatehouse in either direction.

Some 2,700 years ago, God inspired the Prophet Isaiah to write about a vast trade bloc—“a mart of nations”—that would form in the end time (Isaiah 23:3).

Verse 1 shows that a lead nation in this trade bloc would be “Chittim.” Trumpet editor in chief Gerald Flurry explains in his booklet Isaiah’s End-Time Vision that Chittim, or Kittim, is an ancient name for modern China. Another leading entity in the trade bloc is “Tyre.” Mr. Flurry explains that this represents “the commercial center” of modern Europe. A related passage in Ezekiel 27 mentions ancient names for modern Russia (Tubal and Meshech), showing that it too will join this “mart.”

“With a German-led Europe (the king of the north) possessing great maritime power, North America will be surrounded on the east by Europe and the south by Latin America,” Mr. Flurry writes. “The Bible contains many prophecies of that European power attacking America—and many other prophecies of America being besieged” (Isaiah’s End-Time Vision). He then explains that this dramatic besiegement will be accomplished with the help of the other countries associated with the “mart of nations” of Isaiah 23 and Ezekiel 27, including Russia and China. “All of them are going to besiege America, Britain and the Jewish nation,” he writes.

“[T]he giants of Asia” will form a “brief alliance” with the European bloc, he writes. “Should Europe, the resurrected Holy Roman Empire, find a way to take advantage—even for a moment—of key resources and strategic holdings of China, Russia and Japan, it would have more than enough power to besiege the Anglo-Saxon nations and enslave them. This is why Isaiah’s prophecy of an end-time ‘mart of nations’ that includes both European and Asian powers is so intriguing.”

Mr. Flurry draws particular attention to the Latin American region, due to its proximity to the United States. “Herbert Armstrong long prophesied, and we expect, the alliance between Europe and South America to grow extremely strong,” he writes. Europe already wields considerable influence in Latin America. And once Russia and China enter into a brief alliance with Europe, the influence these powers exert in Cuba, Nicaragua and Venezuela will translate into greater foreign control over the region.

A gate is a narrow passage of entrance or exit. When speaking nationally, a sea gate is a narrow choke point like the Panama Canal, the Straits of Florida, the Windward Passage or the Yucatan Channel. God gave Britain and America these strategic gates and many others, ensuring that they would become economic and military superpowers. But God also warned that if America and Britain did not obey Him, then not only would these sea gates be taken away, but they would be used against them. This is about to happen.

These are chilling prophecies, pointing to some dark days ahead for America and some of its allies. But Bible prophecy shows that the “mart of nations” and the conflict associated with it is actually divine correction that will be immediately followed by the most hope-filled epoch in man’s history.

“Two great trading blocs are positioning themselves to control the world,” Mr. Flurry writes. “But that trading partnership won’t last long. Soon they will clash, just before Jesus Christ returns and destroys both of them.” Christ will bring with Him a time of peace and stability for the peoples of all nations.