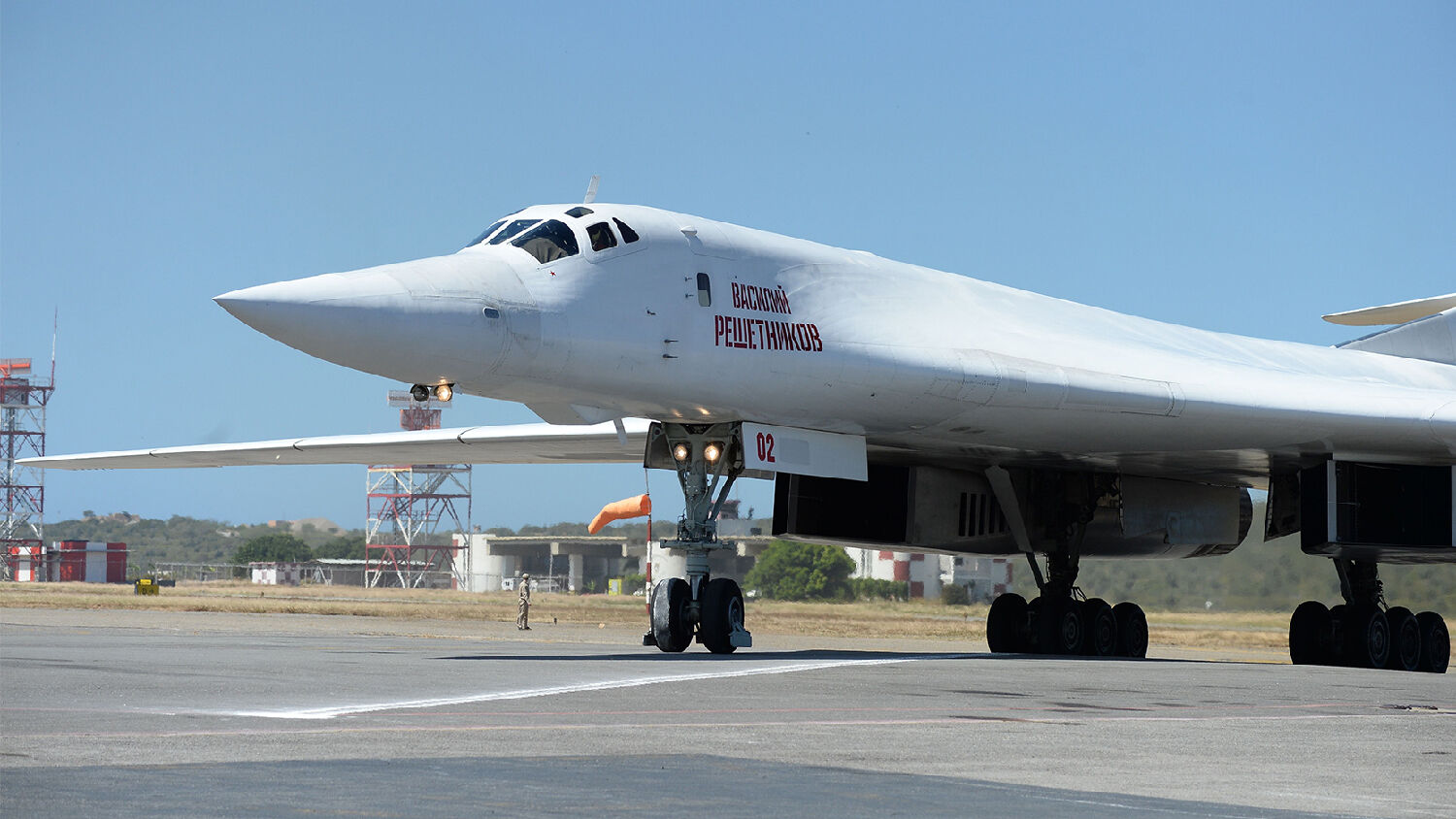 A brazen display of Russia’s aggression in the U.S.’s backyard

Two Russian nuclear-capable bombers flew a patrol over the Caribbean Sea on December 12 from a base in Venezuela, as tensions between Russia and the United States continue to escalate.

“During the international visit of the Aerospace Defense Forces’ delegation to the Bolivarian Republic of Venezuela, pilots of strategic bombers Tu-160 conducted a flight in the airspace over the Caribbean Sea,” a Russian Defense Ministry press release said. “The flight lasted for about 10 hours.”

The Russian Tu-160 bombers had arrived in Venezuela on December 10, accompanied by a heavy-lift cargo plane and a passenger plane. The “Blackjack” Tu-160 is Russia’s main supersonic strategic bomber, capable of launching cruise missiles with conventional or nuclear warheads up to 3,400 miles. During their patrol over the Caribbean Sea, most of the United States was well within this range.

The Russian Defense Ministry said the Russian aircraft were accompanied for “certain parts of the route” by aircraft from Venezuelan National Bolivarian Military Aviation. “The pilots from the two countries practiced air cooperation when fulfilling air tasks,” the ministry said.

The patrol is part of Russia’s plan to “establish a long-term military presence in Latin America,” reported tass, a news agency owned by the Russian government. “According to military envoys, Russian authorities have made a decision (and Venezuelan President Nicolas Maduro did not object) to deploy strategic aircraft to one of Venezuela’s islands in the Caribbean Sea, which has a naval base and a military airfield.”

The island in question is La Orchila, 125 miles northeast of Venezuela’s capital, Caracas.

The patrol and news of a possible permanent Russian presence in the Caribbean comes just days after Igor Korotchenko, editor in chief of Russia’s National Defense magazine, said the Kremlin may react to the appearance of an American submarine in Russian-claimed waters by sending Russian submarines to the Gulf of Mexico. Geopolitical Futures noted that the bomber patrol and the statement about submarines “serve as reminders to Washington that Moscow can retaliate against U.S. moves in places like Ukraine in areas that matter most to U.S. security at home.”

The Caribbean Sea matters immensely to U.S. security at home, as was made alarmingly evident in the Cuban Missile Crisis of 1962. And though Russia’s Tu-160s have now returned home, Russia’s relationship with Venezuela remains robust. Bible prophecy shows that Russia’s influence in the Latin American region will continue to grow.

Some 2,700 years ago, God inspired the Prophet Isaiah to write about a vast trade bloc that would form in our lifetime: “a mart of nations” (Isaiah 23:3).

Verse 1 shows that “Chittim” would be a lead nation in this trade bloc. Trumpet editor in chief Gerald Flurry explains in his booklet Isaiah’s End-Time Vision that Chittim, or Kittim, is an ancient name for modern China. Another leading entity in the trade bloc is “Tyre.” Mr. Flurry explains that this represents “the commercial center” of modern Europe. A related passage in Ezekiel 27 mentions ancient names for modern Russia, showing that it too will join this “mart.”

“The Bible contains many prophecies of that European power attacking America—and many other prophecies of America being besieged,” Mr. Flurry writes in his booklet. He explains that this dramatic besiegement will be accomplished with the help of the other countries associated with the “mart of nations” of Isaiah 23 and Ezekiel 27, including Russia. “All of them are going to besiege America, Britain and the Jewish nation,” he writes.

“[T]he giants of Asia” will form a “brief alliance” with the European bloc, he writes. “Should Europe, the resurrected Holy Roman Empire, find a way to take advantage—even for a moment—of key resources and strategic holdings of China, Russia and Japan, it would have more than enough power to besiege the Anglo-Saxon nations ….”

Mr. Flurry writes: “This is why Isaiah’s prophecy of an end-time ‘mart of nations’ that includes both European and Asian powers is so intriguing.”

Mr. Flurry also draws particular attention to the Latin American region, due partly to its proximity to the United States. “Herbert Armstrong long prophesied, and we expect, the alliance between Europe and South America to grow extremely strong,” he writes. Europe already wields considerable influence in parts of Latin America. And once Russia and China enter into a “brief alliance” with Europe, the influence that Russia and China are building in Venezuela and elsewhere in Latin America will translate into even greater European control over the region.

These are chilling prophecies, pointing to some dark days ahead for America and some of its partners. But Bible prophecy shows that the “mart of nations” and the conflict associated with it will be immediately followed by the most hope-filled epoch in man’s history. “[T]hat trading partnership won’t last long,” Mr. Flurry writes. “Soon they will clash, just before Jesus Christ returns and destroys both of them” (ibid). Jesus Christ will return to Earth, bringing with Him a time of peace and stability for the peoples of Russia, Venezuela, the U.S. and all other nations.

To understand more about these developments and the hope that is intimately tied to them, order your free copy of Mr. Flurry’s booklet Isaiah’s End-Time Vision.