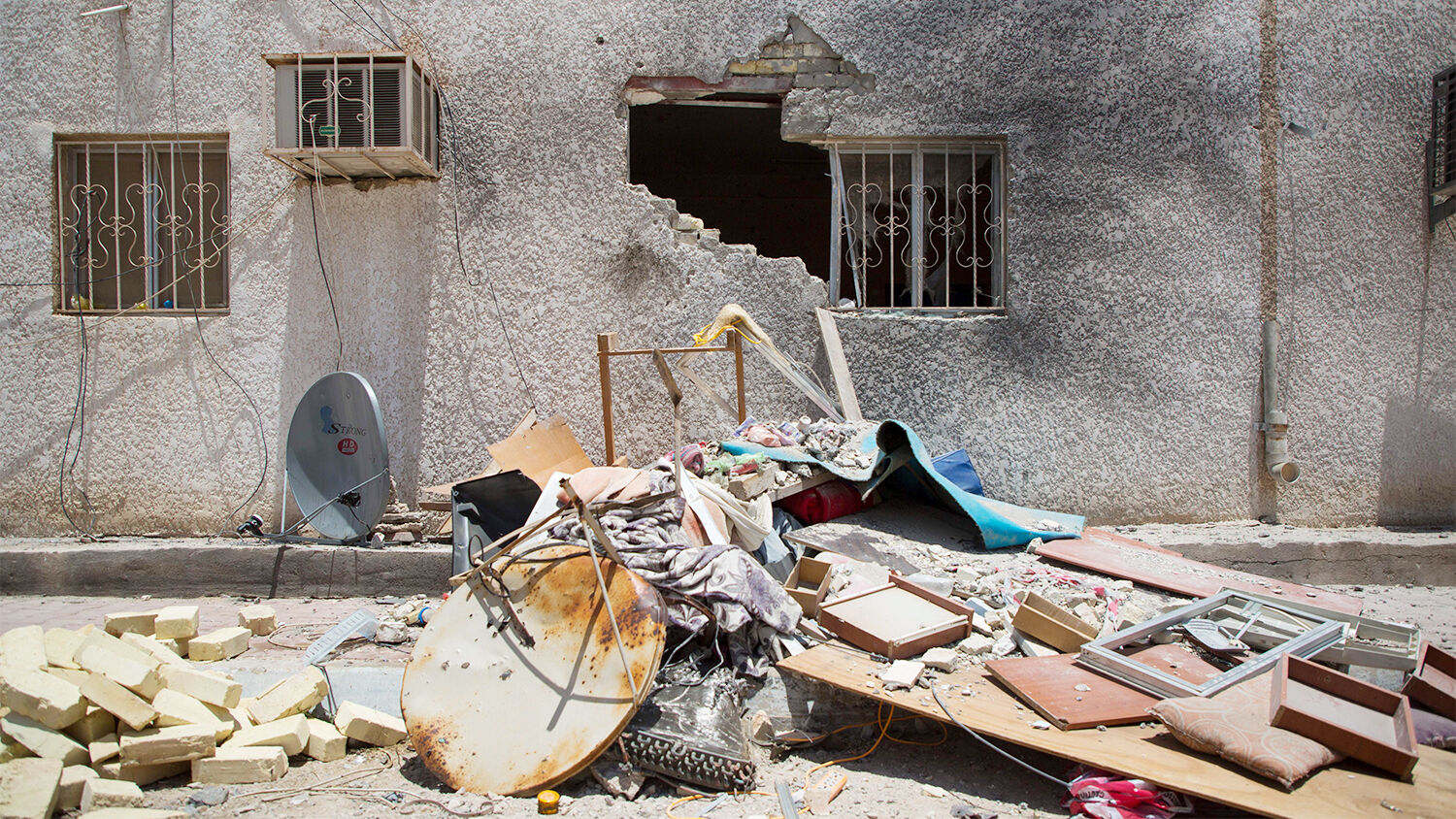 Damage to a drilling facility hit by a Katyusha rocket in the Burjesiya area, a key oil-producing region hosting various Iraqi and foreign companies including U.S. Exxon Mobil, north of the Iraqi city of Basra on June 19
HUSSEIN FALEH/AFP/Getty Images

Iraq’s Popular Mobilization Units are the key in Iran’s plan to drive the United States out of Iraq.

On June 15, three mortar shells struck the grounds of Balad Air Base near Baghdad, where American military personnel are stationed. The attack caused only small, brief brush fires.

On June 18, another Katyusha rocket, reportedly domestically built, struck another U.S.-Iraqi training base near the Presidential Palaces Compound in east Mosul. The rocket launcher was later found by Iraqi officials.

None of these attacks resulted in any reported injuries or damage, and no one has claimed responsibility.

On June 19, two rockets struck near the city of Basra at the edge of a compound housing employees of American oil company ExxonMobil. Three injuries were reported, and again there was no claim of responsibility.

The four attacks last week occurred after a Katyusha rocket struck the U.S. embassy compound in Baghdad on May 19. The rocket launcher was found by Iraqi officials in East Baghdad, where Shiite militias are known to operate.

Although there have been no claims of responsibility for any of the five attacks, it is widely suspected—and evidence strongly suggests—that Iran-backed Iraqi Shiite militias from the Popular Mobilization Units are responsible, partly because the units have a strong presence in the regions where the attacks occurred.

The Popular Mobilization Units is an official Iraqi state umbrella organization dominated by pro-Iran Shiite militia groups. These militias fought for Iraq against the Islamic State. Many of them were either trained in Iran, led by Iran’s Islamic Revolutionary Guard Corps officers, or even created in Iran. Many are still loyal to Iran for religious reasons and for its support in the Iraqi Civil War. Some militias even have a direct line of communication to Iran through a secure base in Iraq’s Diyala province.

The recent rocket and mortar attacks occur at a time when tensions in the Middle East between Iran and the U.S. are high. On May 12 and June 13, oil tankers in the Gulf of Oman were attacked. These attacks also remain unclaimed, yet evidence strongly suggests Iran is responsible.

In May, when the U.S. ended oil waivers and began fully enforcing sanctions on Iran’s oil and shipping sectors, Iranian oil exports plummeted to about 400,000 barrels per day—its lowest levels in nearly 30 years. In 2017, crude oil accounted for 72 percent of Iran’s exports and is critical to its economy.

Iran is feeling the pressure, and it is pushing back.

After the May attack on the U.S. Embassy, Iraqi President Barham Salih told cbs Evening News that increasing regional tensions could cause a war in which Iraq would “yet again turn into a zone of proxy conflict.”

According to the Washington Post, Iraqi politicians and diplomats are beginning to fear that “Iraq may become a staging area for an unpredictable conflict” between Iran and the U.S.

Drumbeat of war with #Iran with a familiar sound

The #Trump’s administration is preparing the ground for direct confrontation with Iran which follows a familiar pattern before the United States under President #GeorgeWBush, invaded #Iraq in 2003 with false pretexts. pic.twitter.com/ADD4pXsLDg

While the evidence suggests Iran is behind these attacks, Iranian propaganda puts the blame on the United States. More and more Iraqis are beginning to see the U.S. as the enemy. Meanwhile, Iran continues to support terrorism, call for America and Israel’s destruction, and stockpile matériel.

When Iran’s nuclear program was first revealed in 2002, after 18 years of operation, Iran moved many of its operations underground. The video above features a massive Iranian underground facility, with the “Death to Israel” slogan over the entrance, designed to store and launch missiles. The video also depicts prelaunch maintenance and the launch of a Qiam-1 missile, which has an operational range of 450 miles.

Iran is a shadowy nation that conceals its actions underground. While it blames the U.S. for attacks and claims it “will not wage war against any nation,” according to Iranian President Hassan Rouhani, it is simultaneously preparing for war and spending an estimated $7 billion a year to fund terrorism.

Iran wants control of Iraq, but first it must drive out the U.S. presence. The Popular Mobilization Units is the key for its success in Iraq.

It may be hard to believe the Iraqi government would force the U.S. out of its country and hand itself over to the Iranian regime. However, Iran has significant political clout in Iraq. It did not gain this control through a military invasion, but rather through diplomatic infiltration.

“Shiite militias have been institutionalized within Iraq’s armed forces; their leaders have also waded deeper into politics,” stated the Wilson Center. Aside from simply being a state military organization supported by Iran, many militias also have political wings.

Iran has managed to infiltrate Iraq’s political structure behind the scenes and out of the public eye.

In Iraq’s May 2018 parliamentary elections, several militias of the Popular Mobilization Units formed a political wing: the Fatah Alliance. Some of the militias in the coalition are U.S.-designated Foreign Terrorist Organizations. Nevertheless, politicians associated with the militias, or actual militia members, ran for parliament. The election resulted in the Fatah Alliance gaining the second-largest number of seats, losing only to the Shiite Sadrist coalition. Meanwhile, the militias still receive support from the Islamic Republic of Iran.

In February this year, the two coalitions began to show signs of unity as they worked together to help form a government; both coalitions are intent on driving out the U.S. In doing so, they skipped forming a majority coalition. This puts the Iraqi government in a very weak state—one which is considerably more vulnerable to Iranian influence.

Iraqi Executive Order 91, enacted by former Prime Minister Haider al-Abadi in 2016, made Popular Mobilization Units an official state organization. The same order forbids the militias from entering politics. However, due to their extreme popularity, many have overlooked this inherent disregard of the law. The same militias that declare their highest allegiance to Iranian Supreme Leader Ayatollah Seyyed Ali Khamenei are now in the parliament working to drive the U.S. out of Iraq.

Why is this important? Because Iraq’s parliament is responsible for selecting its prime minister—who is officially in command of the Iraqi military and the Popular Mobilization Units. He is also the highest executive power, possessing the political authority to remove U.S. forces from Iraq.

In 1982, during the Iran-Iraq War, Iraqi Ayatollah Mohammed Baqir al-Hakim founded the Islamic Supreme Council of Iraq. This pro-Iran, Shiite Islamist party consisted of many prominent Iraqis who were under oppression and fled in exile to Iran. The party was founded in Tehran and consisted exclusively of Iraqi exiles. The council was based in Iran for two decades until the fall of then Iraqi President Saddam Hussein, when it moved back to Iraq.

Iraq’s current prime minister, Adil Abdul Mahdi, claims to be an independent. However, he was a member of the Islamic Supreme Council of Iraq from its inception in 1982 until he left in 2017, the year before Iraq’s elections. In other words, Iraq’s current prime minister lived in Iran, was a staunch supporter of the Islamic Revolution, was a member of a pro-Iran party founded in Iran for most of his political career, and shares the same goal with Iran to oust U.S. forces from Iraq.

Trumpet editor in chief Gerald Flurry predicted this takeover in his booklet The King of the South. He writes (emphasis added):

Through diplomatic channels, Iran is not only working with, but inside the Iraqi government.

The May-June 2019 Trumpet stated: “Iraq is conquered!” However, Iraq is just a stepping-stone. Once Iran manages to drive the U.S. out of Iraq, it can completely set its sights on the jewel of its conquest: Jerusalem.

Daniel 11:40 describes a clash between world powers to occur “at the time of the end.” One of these powers is radical Islamic extremism, led by Iran. The U.S. is not mentioned in this clash; this could imply that Iran may be successful in driving the U.S. out of the Middle East. Nevertheless, this clash will revolve around Iran’s push for control of Jerusalem. Yet Zechariah 14 says that Iran will not be entirely successful in its endeavors.

Iran’s control of Iraq will provide it with a strategic position from which it can increasingly apply pressure on Israel. As Iran works to drive the U.S. out of Iraq, watch for Iran to set its sights on Jerusalem.

For more information, please request your free copy of The King of the South.