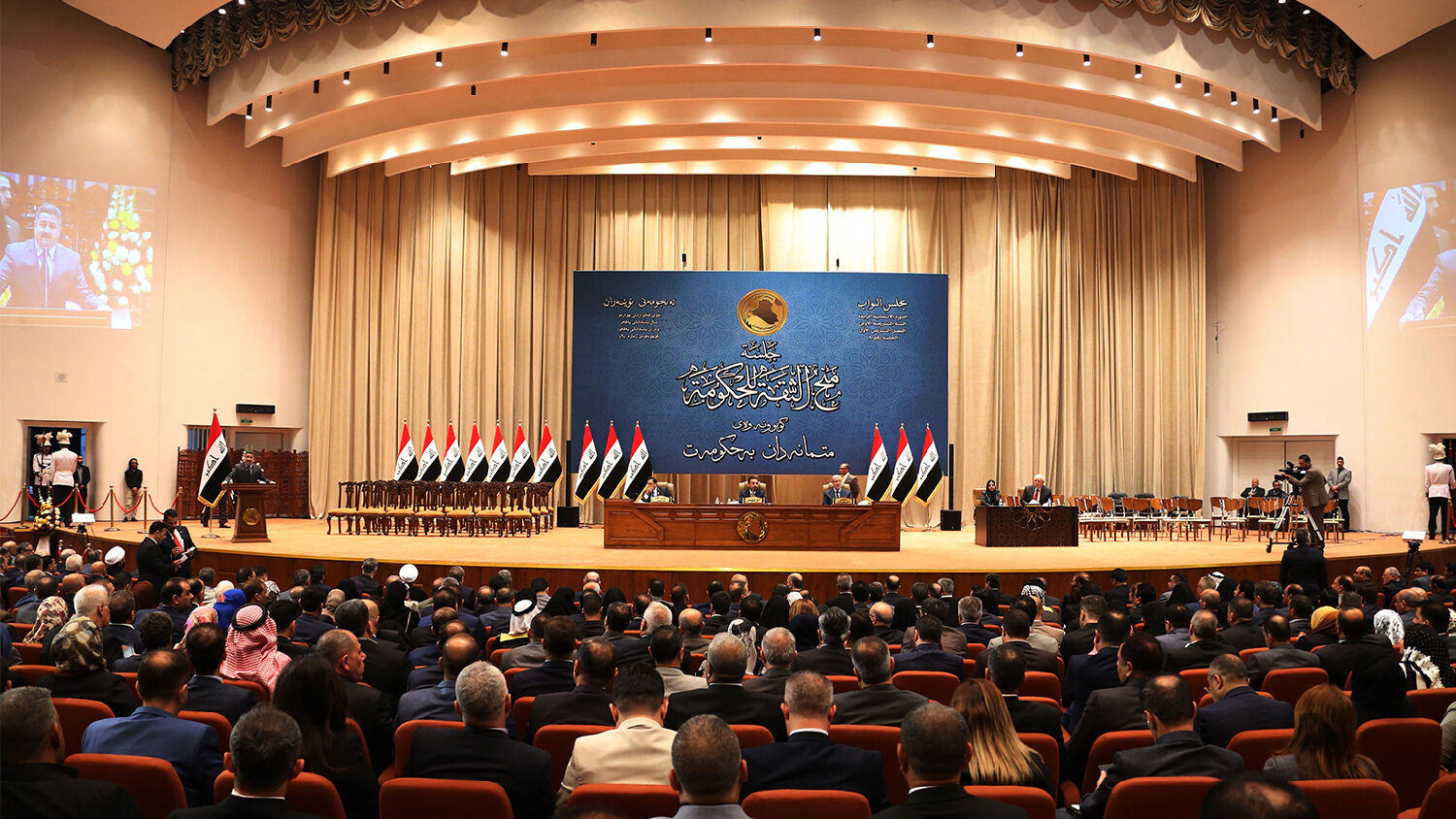 The Iraqi parliament votes on the new Iraqi government, headed by Adel Abdul Mahdi, on Oct. 24, 2018, in Baghdad.
STR/AFP/Getty Images

In Iraq’s divided parliament, the two opposing sides can agree on one thing.

Senior Iraqi leaders are discussing kicking United States forces out of their country.

Iraqi President Barham Salih said on February 4, “Don’t overburden Iraq with your own issues.” The following day, Iraqi Prime Minister Adil Abdul-Mahdi said, “When it is said that the mission of these [U.S. forces] is to fight a neighboring country, like Iran, for example, we reject that notion. The Constitution itself prevents us from such approaches.”

“Iraqis will respond with a parliamentary decision to oust your [U.S.] military forces. And if they do not leave, we have the experience and the ability to remove them by other means that your forces are familiar with,” said Qais al-Khazali, leader of the Iran-backed Asaib Ahl al-Haq militia. This militia is represented in the Iraqi parliament by the Binaa bloc, which favors close ties with Iran.

On Dec. 26, 2018, U.S. President Donald Trump made his first visit to Iraq since his election. His surprise visit to the al-Asad Air Base in western Iraq took place seven days after he announced his decision to withdraw America’s 2,000 troops currently in Syria. Mr. Trump said he was impressed by the size of the base and he stressed the importance of keeping it. Based on his comments, the president has no intention of abandoning the base or withdrawing its 5,200 troops. But many Iraqi leaders want the U.S. out.

In a February 3 cbs interview, President Trump said, “We spent a fortune on building this incredible base; we might as well keep it.” Mr. Trump sees al-Asad Air Base as strategically important. He said, “I want to be looking a little bit at Iran, because Iran is a real problem. … We have an unbelievable and expensive military base built in Iraq. It’s perfectly situated for looking at all over different parts of the troubled Middle East.”

You’re keeping troops in Iraq because you want to be able to strike in Iran? — @margbrennan

Many Iraqi political and militia leaders have condemned Mr. Trump’s comments about watching Iran from the base, calling his plan a breach of Iraqi sovereignty.

Iraqis are claiming that the U.S. presence is no longer used for antiterrorism purposes but to watch Iran. They argue that this goes against the intended purpose for which the Iraqi government allowed a U.S. presence in the first place.

In 2003, the U.S. military invaded Iraq and ousted the government of Saddam Hussein. The resultant power vacuum led to widespread violence between rivaling Shia and Sunni factions and a violent Iranian-backed insurgency against the U.S.-led coalition. The U.S. responded with a troop surge that peaked at more than 170,000 troops in 2007. After the U.S. and Iraq failed to reach an agreement regarding American military involvement, the Obama administration withdrew all U.S. forces, with the last units departing in December 2011.

In 2014, the rise of the Islamic State in Syria and Iraq caused the Iraqi government to return to the U.S. for help. U.S. forces returned to Iraq, but strictly for antiterrorism purposes. Because Iraq and the U.S. have still not signed an agreement detailing U.S. military deployment in Iraqi territory, the U.S. presence remains only at Iraq’s request, which a parliamentary vote could revoke.

Now political leaders from both sides of the divided Iraqi parliament have called for a vote to expel U.S. forces. Is such a vote plausible?

Could the U.S. Be Forced Out of Iraq?

The Washington Post reported, “Iraq’s new government has tried to avoid being in the middle of a tussle between Washington and Tehran.” Newly elected Prime Minister Adel Abdul Mahdi, backed by Shiite politicians who are led by a critic of both the U.S. and Iran, is seen as a leader “willing to seek compromise.”

In the February 8 Trumpet Hour radio program, Middle East correspondent Brent Nagtegaal said that Iraq is “trying to navigate the very tightrope of the U.S. on one side and Iran on the other.” He said this is becoming increasingly more difficult for the Iraqi government as its economy becomes more dependent on Iran.

President Salih said that “it is of fundamental interest for Iraq to have good relations with Iran.” Iraq imports gas from Iran for power plants. It also imports a wide range of goods, including agricultural products, air conditioners, car parts, food and home appliances. Last year, Iranian President Hassan Rouhani said that economic relations between Iran and Iraq was about $12 billion per year, but he believed the figure would rise to $20 billion in 2019. Iraq’s imports of Iranian goods for the 12 months ending in March 2018 reached $6 billion.

In November, the Iraqi government said it refused to comply with U.S. sanctions targeting Iran’s crucial shipping, banking, oil and gas sectors. According to the Jerusalem Post, the weekend before making that decision, Mahdi met with Rouhani to discuss “ways to enhance bilateral ties as well as the potential establishment of free trade zones along the shared border. The trip raised eyebrows in Washington, which fears growing Iranian influence over Baghdad could offset a 15-year military and diplomatic effort to rebuild Iraq in its image.”

The Carnegie Endowment for International Peace stated, “Iran is increasingly focused on securing its access to the Iraqi market, the second biggest importer of Iranian non-oil commodities,” and it is looking to increase its influence “by investing in schemes and projects linked with loyal paramilitary forces.” When the U.S. left Iraq in 2011, it basically opened the door for Iran to gain control under the pretext of battling the Islamic State, and that is exactly what happened.

Economic ties aside, the Iraqi parliament itself is pro-Iran. Both the parliament’s speaker of the house, Mohammed al-Halbusi, and its first deputy speaker, Hassan Karim, are from the Fatah, or “Conquest,” Alliance, a pro-Iran bloc. The Fatah Alliance is the parliament’s second-largest party. The political coalition was formed by groups involved in the Iranian-backed Popular Mobilization Units to contest the 2018 general election. The Popular Mobilization Units are an Iraqi, state-sponsored, majority-Shiite umbrella organization with about 40 militia groups. Its original purpose was to combat the emergence of the Islamic State. The organization has become as powerful as the official Iraqi military, so Iran is seeking to use it to control Iraq. According to the Times of Israel, the paramilitary group Nujaba receives orders “directly from Iran, under the orders of al-Quds Force commander Qassem Suleimani.”

Iraq’s pro-Iran parliament and its economic reliance on Iran makes a vote by the Iraqi parliament to expel U.S. forces more plausible than it might first seem. Whether or not the vote takes place, the trends are showing an increasing Iraqi alliance with Iran and an increasing hostility against the U.S. In the end, Iran will gain full control of Iraq, just as the Bible prophesies.

Daniel 11:40 prophesies of an end-time power bloc, called “the king of the south,” that is extremely aggressive. In his booklet The King of the South, Trumpet editor in chief Gerald Flurry identifies this power bloc as radical Islam, led by Iran. Historically, Iran, or the Persian Empire, was never great without Mesopotamia, modern-day Iraq. The same is true today. In order for Iran to dominate the region, it must control Iraq.

Written over a year ago, we are now seeing this forecast becoming reality. For more information about Iraq’s prophetic fall to Iran, please read Mr. Flurry’s article and request your free copy of The King of the South.