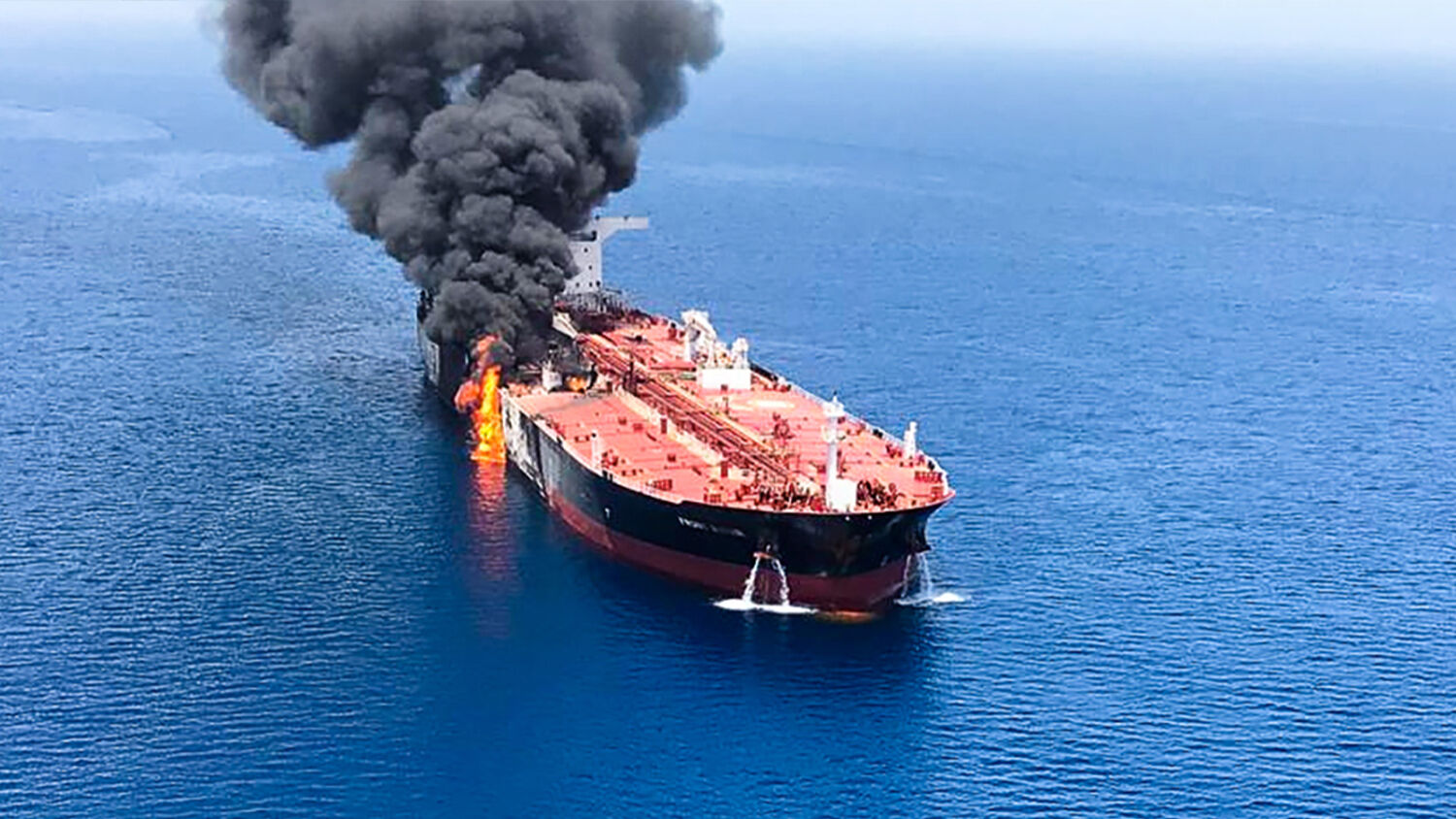 Fire and smoke billow from Norwegian-owned Front Altair tanker on June 13 after it was attacked in the waters of the Gulf of Oman.
AFP/Getty Images

Iran’s fingerprints are on a bold attack against the oil trade and the global economy.

jerusalem
Just after sunrise on June 13, two massive tankers full of petrochemicals were attacked inside the Gulf of Oman, at the exit point of the Strait of Hormuz. The Kokuka Courageous, a Japanese-flagged vessel enroute from Saudi Arabia to Singapore, was struck by an explosive device, most likely a magnetic mine that attached to the side of the ship. The resultant fire in the engine room caused the crew to abandon ship.

Shortly thereafter, another distress signal was received by United States Navy ships in the Gulf. Norwegian-owned tanker Front Altair, bound for Taiwan from the United Arab Emirates, reported that it too had suffered an explosion. Its crew also required rescue.

Aerial footage shows one of the oil tankers targeted in the Sea of Oman#SeaofOman pic.twitter.com/mdvEPPT3J4

While no nation has claimed responsibility for the attack, the U.S. blames Iran. And the evidence is quite compelling. On Friday, the U.S. Navy released grainy surveillance footage of an Iranian fast attack boat approaching the side of the Kokuka Courageous. The video was captured at 4 p.m. local time yesterday, and allegedly shows the Iranians removing an unexploded Limpet mine from the ship’s hull.

Earlier, members of the Kokuka Courageous crew claimed to have spotted the undetonated mine. Fears that it too would explode were part of the reason they abandoned ship. The Iranians tried to hide the evidence, but instead were caught red-handed.

Video recorded by U.S aircraft of an IRGC Gashti-class patrol boat removing an unexploded limpet mine from M/T Kokuka Courageous. Courageous suffered an explosion while in #GulfofOman. Her 21 crew members were rescued by #USNavy destroyer #USSBainbridge. https://t.co/YpiEUALHWj pic.twitter.com/rjWKJN0qcf

Iran insists it had nothing to do with the attacks, and emphasizes that its sailors rescued some of the tankers’ crew members. (The attack occurred about 20 miles from a new Iranian naval base.)

U.S. Secretary of State Mike Pompeo emphatically blamed Iran for yesterday’s attacks, linking them with several other aggressive Iranian actions over the past month. He stated:

It is the assessment of the United States government that the Islamic Republic of Iran is responsible for the attacks that occurred in the Gulf of Oman today. This assessment is based on intelligence, the weapons used, the level of expertise needed to execute the operation, recent similar Iranian attacks on shipping, and the fact that no proxy group operating in the area has the resources and proficiency to act with such a high degree of sophistication.

Thursday’s brazen attacks in the Gulf of Oman are similar to a May 14 attack, when four oil tankers from Norway, Saudi Arabia and the U.A.E. were also struck by Limpet mines while at anchor outside Port Fujairah. The port, which onloads oil drawn by pipeline from inside the Persian Gulf, allowing tankers to avoid transit through the Strait of Hormuz.

A preliminary investigation into the May 14 attacks by the U.A.E., Norway and Saudi Arabia declined to blame Iran directly for the attack, but said its precision showed that it was definitely perpetrated by a “state actor.” The investigators’ statement read:

The explosive charges were placed with a high degree of precision under the waterline, in ways that were designed to incapacitate the ship without sinking them or detonating their cargoes, indicating minute knowledge of the design of the targeted ships. … The attacks required expert navigation of fast boats that were able to intrude into U.A.E. territorial water and to exfiltrate the operatives after delivering the explosive charges.

Fast boats, Limpet mines, naval divers and, most importantly, motivation all point to Iran as the perpetrator of the May 14 attacks and the June 13 attacks. Iran had warned on April 22 that it would impede the flow of oil out of the Persian Gulf if U.S. financial sanctions prevented it from exporting its own oil.

The style of the attacks also falls very much in line with Iran’s abilities. Iran could never win a full-scale war against the U.S., so it uses hybrid warfare, attacking through proxies or with plausible deniability. This gives it much more power over the Persian Gulf and other strategic areas than it would have if it advanced its interests using its diplomatic and military assets in compliance with international conventions and laws.

About 30 percent of shipping oil sails out of the Persian Gulf. Threatening its safe transit causes oil prices to rise worldwide. In the hours following Thursday’s attack, the price of oil jumped 4 percent.

Iran has been training for years to carry out the type of attacks we are now witnessing. It knows that the attacks’ effect on the price of oil is one of its most important geopolitical weapons. Anthony H. Cordesman, an analyst for the Center for Strategic and International Studies, summarized Iran’s capabilities yesterday:

Iran also does not have to launch a major war. It can conduct sporadic, low-level attacks that do not necessarily provoke a major U.S. or Arab reaction, but create sudden risk premiums in petroleum prices and the equivalent of a war of attrition. Tankers are inherently vulnerable to relatively small anti-ship missiles and ucavs [unmanned combat aerial vehicles], and attacks by submersibles and radio-controlled small craft filled with high explosives. Iran can plant “smart” mines in the bottom of tanker routes that can detect large tankers and home in on them, and be set to arm at widely spaced intervals.

These methods of “hybrid” attack can be carried by individual ships … that are not part of Iran’s armed forces, that do not have Iranian flags or operators wearing Iranian uniforms, and that cannot be directly tied to actions by the Iranian government.

Iran is uniquely positioned to attack and upset global oil trade in the Persian Gulf, the Strait of Hormuz, the Gulf of Oman and the Bab el-Mandeb, two of the three sides of the Arabian Peninsula. In addition, Iranian-backed Houthis are experienced at laying naval mines and using exploding boats to disrupt shipping along the third side: the Red Sea.

These attacks and the resulting rise in oil prices remind us that the global economy heavily depends on this single, vulnerable commodity.

Bible prophecy indicates that this vulnerability will play an even greater role in world events very soon.

Daniel 11:40-45 state that an end-time “king of the south” will gain control over Egypt, Libya and Ethiopia. This will give it a grip on many of the world’s major oil choke points. Control of Egypt would mean control of the Suez Canal. Control of Ethiopia would probably include control of the Horn of Africa and the Bab el-Mandeb. Libya is an oil-producing nation and would add a strategic base on the Mediterranean. Iran virtually controls Iraq already, the world’s fourth-largest oil producer.

If the global oil price is impacted by attacking just two tankers in the Gulf of Oman, what will happen if Iran actually mobilizes its forces to do larger, simultaneous attacks on all these geographic areas. If Iran halts maritime traffic for weeks or even days, the major delays and soaring oil prices will heavily damage the global economy.

The U.S. hopes that such an eventuality will never take place. Renewed financial sanctions on Iran’s oil sector are being imposed as part of a high-pressure campaign to compel Iran to change its behavior and negotiate.

The same day the attack took place, Japanese Prime Minister Shinzō Abe was in Tehran on the first visit by a Japanese leader since the Islamic Revolution. Abe was acting as an emissary for U.S. President Donald Trump, delivering a message to the Iranians that the U.S. wants to negotiate with Iran.

You said Mr. @abeshinzo, that Trump has said negotiations with the U.S. would lead to Iran’s progress. By the Grace of God, without negotiations & despite sanctions, we will progress.

As far back as December 1994, Trumpet editor in chief Gerald Flurry speculated that an attack on global oil supplies by Iran would have huge ramifications. It “could help trigger a collapse of the Western world’s weak currencies,” he wrote. “This in turn could cause Europe to quickly unite into the most powerful economic bloc in the world. That very event is prophesied to occur in your own Bible!”

To learn more about this prophesied rise of Iran, the role oil will play in the conflict, and why Iran will not moderate, please request The King of the South.