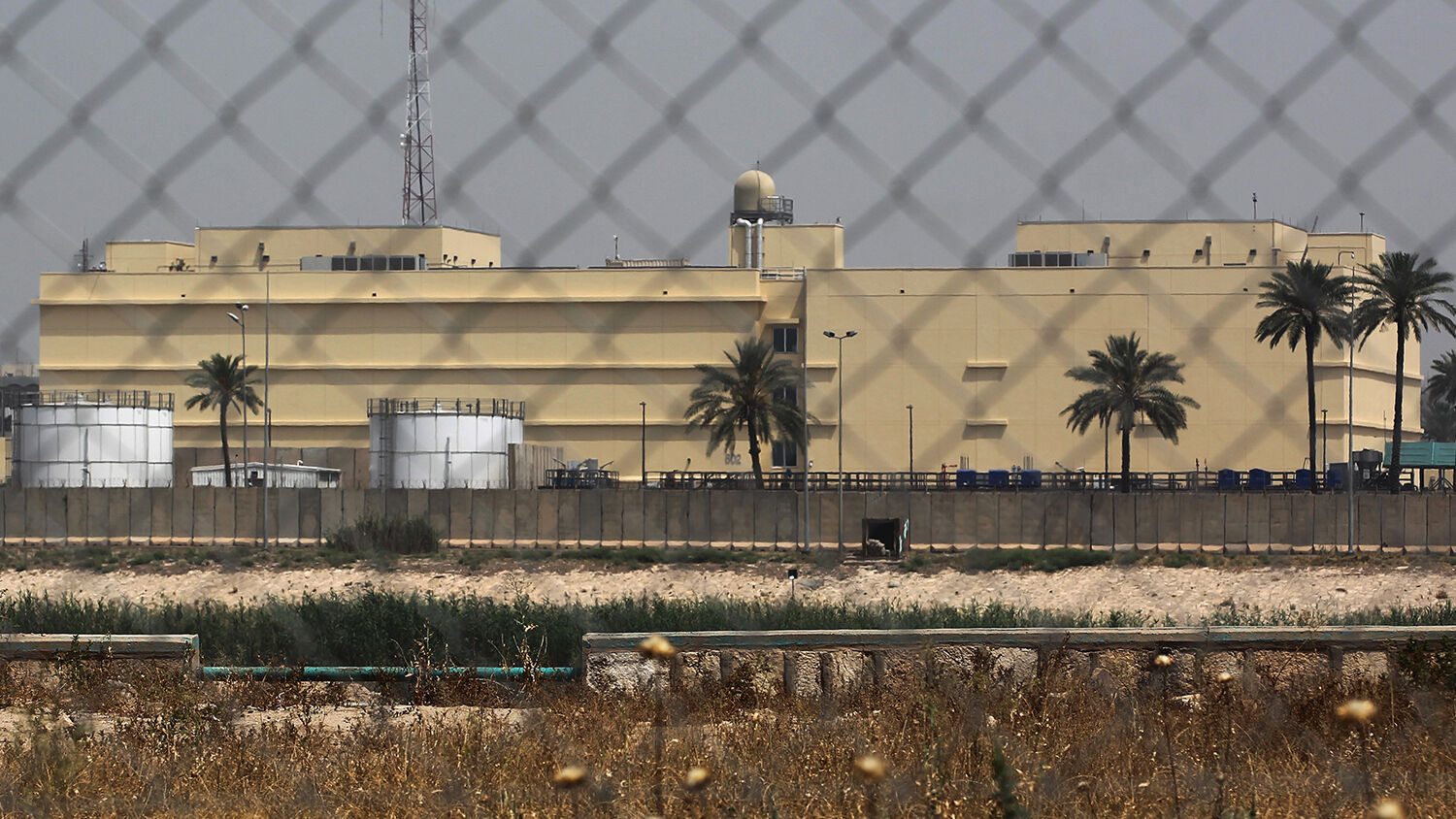 The U.S. Embassy is in Baghdad’s Green Zone in the Iraqi capital.
AHMAD AL-RUBAYE/AFP/Getty Images

A clear sign America is not welcome in Iraq

A rocket attack on May 19 landed less than a mile from the United States Embassy in Baghdad’s well-fortified International Green Zone. The warning shot is a clear sign that America is no longer welcome in Iraq.

It was the first rocket attack in the Green Zone since September 2018 when three mortar shells landed in an abandoned lot. This zone houses the world’s largest embassy and the Iraqi parliament building. There were no reported casualties from the recent attack.

No group immediately claimed responsibility for the attack, but Iraqi intelligence suspects the Shiite militias. Iraqi military spokesman Brig. Gen. Yahya Rasoul told the Associated Press that the rocket was believed to be fired from east Baghdad, home of the Iranian-backed Shiite militias.

According to cbs, days before the attack, Shiite militias were moving short-range ballistic missiles toward Baghdad. In response, the U.S. evacuated all nonessential staff from its embassy.

On May 13, the Washington Institute for Near East Policy reported, “Iran is covertly supplying long-range artillery rockets to proxy militias inside Iraq, including U.S.-designated terrorist groups Kataib Hezbollah and Harakat Hezbollah al-Nujaba, and potentially the Badr Organization.” These three Iranian proxy militias are some of the largest in the Paramilitary Mobilization Units (pmu).

The pmu is an Iraqi state organization comprised of about 50 majority Shiite militia groups. These militias fought for Iraq against the Islamic State. Many of them were either trained in Iran or led by Islamic Revolutionary Guards Corps officers. Many still retain their loyalty to Iran for its support in the Iraqi Civil War. Some militias even have a direct line of communication to Iran through a secure base in Iraq’s Diyala province.

If these militias obtain short-range ballistic missiles, they will be in a position to strike U.S. forces from various locations. American troops would find themselves surrounded.

According to the Washington Post, Iraqi politicians and diplomats are beginning to fear that “Iraq may become a staging area for an unpredictable conflict” between Iran and the United States. The Iraqi government is still working to repair years of damage from its war against the Islamic State. Both Iran and the U.S. played key roles in supporting Iraq during that war. Despite its support, Iraqi lawyers see the U.S. as the instigator of the brewing conflict between Iran and the U.S. over Iran’s nuclear program.

It began in 2003 with the U.S. invasion of Iraq to oust Iraqi President Saddam Hussein. America’s 2007 troop surge made it seem that the U.S. was committed to Iraqis’ welfare in its goal to establish a functioning democracy in the Middle East. But Iraqis lost hope when the Obama administration initiated a speedy troop withdrawal in 2011.

“[T]he region lost trust in American power,” Vali Nasr writes in The Dispensable Nation. Iraqis learned that the U.S. “had neither the patience nor the perseverance to see through what we started.”

To most Iraqis, the 2011 withdrawal confirmed that the U.S. was not dedicated to Iraqi freedom but to its global interests. Though the U.S. agreed to return to fight the Islamic State in 2014, the wound from its initial withdrawal hasn’t healed.

To make matters worse, in a February 3 cbs This Morning interview, U.S. President Donald Trump said, “I want to be looking a little bit at Iran, because Iran is a real problem. … We have an unbelievable and expensive military base built in Iraq. It’s perfectly situated for looking at all over different parts of the troubled Middle East.”

The president’s comments caused an uproar as some Iraqis called for the parliament to oust U.S. forces from the nation. In response, Iraqi President Barham Salih said on February 4, “Don’t overburden Iraq with your own issues.” The following day, Iraqi Prime Minister Adil Abdul-Mahdi said, “[W]e reject” the mission of U.S. forces to “fight a neighboring country, like Iran.”

America doesn’t realize it yet, but it has already lost Iraq.

The Shiite militias are deeply connected to the Iranian regime in Tehran. Over the last three years, they have gained unprecedented political and military power.

In Iraq’s May 2018 parliamentary elections, several pmu militias formed a political wing: the Fatah Alliance. Some of the militias in the coalition are U.S.-designated Foreign Terrorist Organizations. Nevertheless, the election resulted in the Fatah Alliance gaining the second-largest number of seats.

Iraqi Executive Order 91, enacted by former Prime Minister Haider al-Abadi in 2016, made pmu militias a state organization. The same order forbids the pmu from entering politics. However, due to their extreme popularity, many Iraqi Shiites have overlooked this inherent disregard of the law. The same militias, which declare their allegiance to the ayatollah in Iran, are now in the government working to kick the U.S. out of Iraq.

Bible prophecy reveals that America will lose its determination to fight (Ezekiel 7:14). As a result, it will lose its status as a major player in the Middle East. In many ways, this has already begun.

Iraq was intended to be the model of U.S. intervention—a project of reliability. America wanted to show it could step in, remove a dictator, and establish a functioning democracy. Iraq would show that American power was still a force for good. But the U.S. evacuation in 2011 crushed that goal. Leviticus 26:20 says that America’s “strength shall be spent in vain.” Between 2003 and 2011, the Iraq War cost the U.S. over $1 trillion and 4,487 lives. America is still the most dominant and powerful nation on Earth, but it lacks the will to use its power.

Verse 19 says, “And I will break the pride of your power; and I will make your heaven as iron, and your earth as brass.” America’s resolve is being weakened. It has not won a war since 1945; and ever since, the U.S. has been in retreat. The 2011 withdrawal from Iraq is clear evidence America is in retreat.

However, under President Trump, America is experiencing a temporary resurgence in its economy, politics, military and its willpower. Yet Bible prophecy reveals that this resurgence will soon come to an end.

Daniel 11:40-45 describe a devastating last world war between three mighty powers: Europe, radical Islam and Asia. But the U.S. is not mentioned in this end-time clash of civilizations.

The rocket attack near the U.S. Embassy is a clear message to America. In The King of the South, Mr. Flurry writes, “The mullahs sent an ominous message to the world: You can’t rely on America for protection and support anymore—especially in the Middle East. We are now in charge here ….”

The more Iran gains control of Iraq and its oil wealth, watch for it to grow bolder in its goal of removing U.S. forces from Iraq.

For more information, please read “Is Iraq About to Fall to Iran?” by Gerald Flurry.