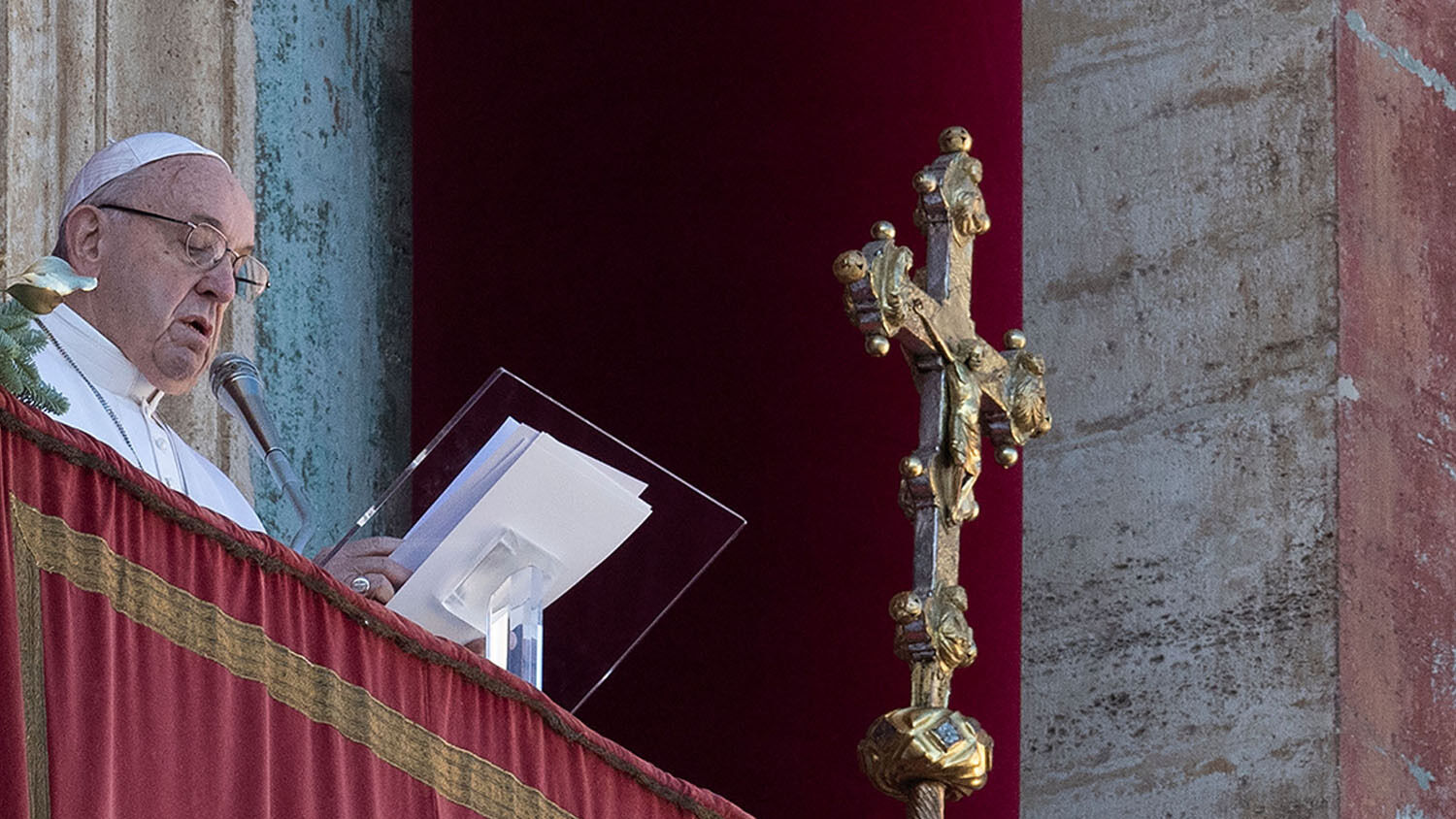 Pope Francis delivers a speech from the balcony of St. Peter’s basilica on December 25 at the Vatican.
TIZIANA FABI/AFP/Getty Images

With Palestinians refusing to work with the U.S., could a new peacemaker step in?

In his Christmas Day speech, Pope Francis called for renewed Israeli-Palestinian peace talks to put an end to over 70 years of conflict. Within hours, Palestinian Authority President Mahmoud Abbas stated that he welcomed resuming dialogue with the Israeli government. Wafa, the news agency of the Palestinian Authority, reported, “He stressed the readiness of the Palestinian side to enter into a peace process on the basis of international law and relevant Security Council and General Assembly resolutions.”

Pope Francis said in his speech, “May [this Christmas] enable Israelis and Palestinians to resume dialogue and undertake a journey of peace that can put an end to a conflict that for over 70 years has rent the land chosen by the Lord to show His face of love.”

When United States President Donald Trump moved the U.S. Embassy to Jerusalem and recognized Jerusalem as Israel’s capital, the Palestinian Authority declared that it “will no longer work with an American-dominated peace process.”

Several weeks ago, Pope Francis met with Abbas at the Vatican and called for a “two-state solution.” During that meeting, Abbas encouraged prayers for peace during the Christmas season and told Pope Francis, “We are counting on you.”

According to the Vatican’s statement after that meeting, as reported by Wafa, “Particular attention was reserved for the status of Jerusalem, underlining the importance of recognizing and preserving its identity and the universal value of the holy city for the three Abrahamic religions.”

Earlier this month, a Palestinian Liberation Organization official told Israel, “We will not participate in a meeting sponsored by the Trump administration.”

In the past year, Abbas has encouraged many nations around the world to enter into diplomatic relations with the Palestinians. The last round of Israeli-Palestinian peace talks collapsed in May 2014.

Despite frequently declaring their readiness to meet, Abbas and Israeli Prime Minister Benjamin Netanyahu have not held formal peace talks in several years: They last met in Jerusalem in September 2010.

Bethlehem Mayor and Palestinian Anton Salman said, “We are staying in the holy land and will maintain it.” He also said that the Palestinians are going to “resist the occupation until our national goals are achieved, specifically independence and establishing a Palestinian state with Jerusalem as its capital.”

Since the Palestinians have made it clear they intend to establish a Palestinian state with its capital in Jerusalem and “will no longer work with an American-dominated peace process,” whom will they turn to?

The Vatican’s History With the Palestinians

In 2014, Pope Francis made a historic visit to Israel. Although he was invited by Israel, he flew first to Jordan and spent most of his first day in Palestinian territories.

Then, at a section of the Israeli border fence in Bethlehem, Pope Francis got out of his vehicle in what appeared to be a planned stop but portrayed as spontaneous. He walked over and touched the fence and began to pray near recently sprayed graffiti that read, “Free Palestine.”

During his visit to Israel, Pope Francis invited then Israeli Prime Minister Shimon Peres and Mahmoud Abbas to the Vatican to pray for peace. The three men met a month later at the Vatican, and Francis said, “I hope that this meeting will be a journey toward what joins us, to overcome what divides us.”

In 2015, Abbas again visited Pope Francis at the Vatican. During the visit, the pope called Abbas an “angel of peace.” Palestinian and Vatican officials met during the visit and outlined a joint treaty, which served as the Vatican’s formal recognition of the “state of Palestine.”

In 2017, Abbas visited the Vatican again and formally inaugurated the opening of the Palestinian Embassy. He spoke with Pope Francis about the move of the U.S. Embassy from Tel Aviv to Jerusalem and stated, “If this is the decision, to transfer the embassy to Jerusalem, it will not help peace, and we hope it doesn’t happen.”

The move of the embassy on May 14, 2018, angered the Palestinians and seemed to be the death of the peace process after Abbas declared they would no longer work with the Americans.

The Vatican and the Crusades

“The oldest political dictatorship on Earth is the Vatican!” proclaimed Herbert W. Armstrong in an October 1951 Plain Truth article titled “The POPE Plans to Move the Vatican!” He continued, “The Roman Catholic Church is far more than a religion. It is also politically a world power.” Isaiah 47:5 calls this church the “lady of kingdoms,” which rules over nations.

“[T]he real objective of the Catholic political power is precisely the same as the goals of communism and fascism—to gain dominance, control and rule over the whole world!” wrote Mr. Armstrong.

Even the Encyclopedia Britannica describes the Vatican as an “ecclesiastical world empire.”

Trumpet editor in chief Gerald Flurry wrote about the Vatican’s actions in Jerusalem in his article “The Dark Side of the Pope’s Visit to Jerusalem”:

The Vatican is a dictatorship. It is literally a state, with political interests, foreign policy, sovereign independence, recognition under international law, official relations, diplomatic immunity, administrative departments, ambassadors, a central bank, a capital, a very centralized government—and a man who dictates.

The pope is the head of 1.3 billion Catholic believers around the world. Catholicism is one of the world’s largest religions, compared to about 900 million Protestants and 1.8 billion Muslims. And because the Vatican is a political power, its own literal nation-state, the pope has a huge amount of political power.

Trumpet Middle East correspondent Brent Nagtegaal wrote in January 2017, “[B]ehind the scenes, understand that the Vatican is working its own agenda that’s neither pro-Israeli nor pro-Palestinian, but pro-Catholic.”

What is this “pro-Catholic” agenda? It is the Vatican’s desire to control Jerusalem.

Jerusalem is considered a holy place by Catholics, Jews and Muslims alike. Both the Vatican and the Palestinians are using each other for their own ambitions to control Jerusalem. The Vatican considers Jerusalem the “center of the universe” and believes that conquering it makes Catholics righteous.

The Crusades were a series of “holy wars” led by the Roman Catholic Church to wrest control of the Holy Land from the Muslims. These wars produced some of the worst bloodshed throughout history: An estimated 1.7 million people died in the Crusades. All of these deaths were “justified” by the Vatican because they were victims in a “holy war.”

In the mid-seventh century, the Catholics fought and were defeated in the Byzantine-Sasanian War. Some 60,000 Catholics were killed and 35,000 enslaved. They lost control of Jerusalem and many relics, including what they claim to be the true cross that Jesus Christ was crucified on. Some historians consider this the first crusade.

The more commonly known crusades began in the 11th century under Pope Urban ii. An excerpt from the book Crusades, by Terry Jones and Alan Ereira, reads, “There was to be one overarching church, ruled by one overarching pope. The Crusade was to be its expression and its instrument.”

The Crusade was the pope’s expression of his desire for Jerusalem and the instrument by which he attempted to control it.

In his booklet The King of the South, Mr. Flurry forecasts one final crusade. The booklet identifies radical Islam, led by Iran, as the biblical “king of the south,” which will “push” at a united Catholic European empire to the north (Daniel 11:40). He writes:

The Jews have Jerusalem now. But not for long. Both Muslims and Catholics have designs for Jerusalem. These two great powers are about to clash again—go head to head in the final crusade over Jerusalem! …

Soon they will push at the king of the north, the so-called Holy Roman Empire—the same religious power that was behind the Crusades. And that push will surely revolve around Jerusalem.

Radical Islam, led by Iran, will antagonize the king of the north into this last crusade. Iran’s pushy foreign policy through state-sponsored terrorism, nuclear ambitions, control over maritime passages, disruption of crucial oil supply, and its ambition to control Jerusalem will provide the Vatican with exactly the rationale it needs to fuel its final crusade.

The book of Daniel prophesied of this last crusade (verse 41). The Catholic European empire will once again enter into the “glorious land.” But unlike the previous Crusades, this one will culminate in the return of Jesus Christ to Earth (Zechariah 14:4). He will restore order to Jerusalem, put down all rebellion, and establish a kingdom that will stand forever (Daniel 2:44).

For more information regarding this coming crusade, please read Mr. Flurry’s article “The Last Crusade” or Chapter 3 of The King of the South.