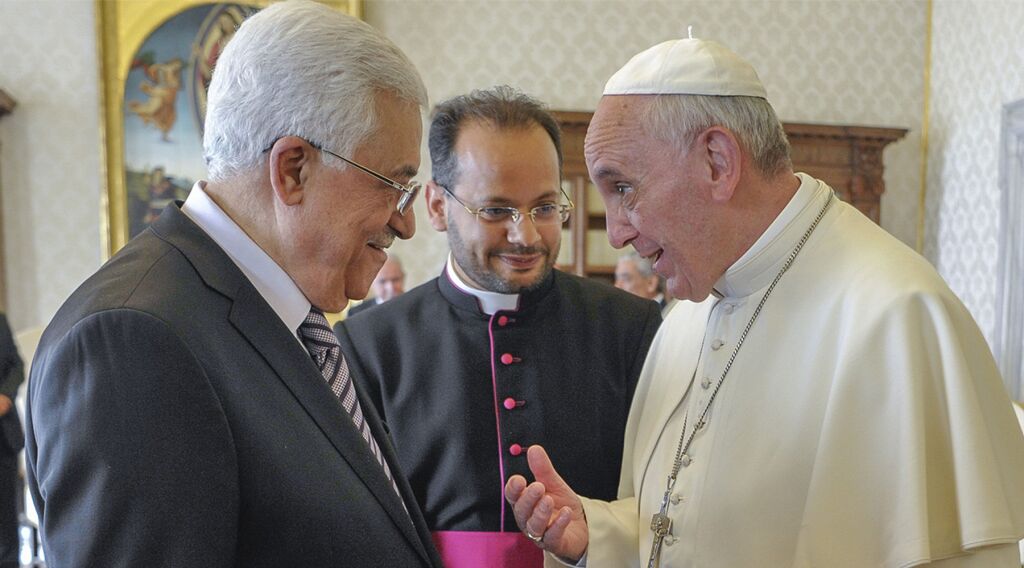 The Vatican is again inserting itself into the peace process—but for what purpose?

Jerusalem—Pope Francis will meet with Palestinian Authority President Mahmoud Abbas in Rome on Saturday, the Vatican confirmed on Tuesday. It will be the fifth personal meeting between the two since 2013, a clear indication of the pope’s dedication to the Palestinian cause.

However, the timing of the meeting, at least from Israel’s standpoint, couldn’t be worse.

Israel is still reeling from the December 23 United Nations Security Council resolution, which declared any Israeli construction in the area that Jordan controlled before the 1967 Six-Day War to be illegal and a “flagrant violation of international law.” The resolution passed because the United States refused to use its veto against the measure as it had done to similar resolutions in the past. In general, Israelis view the move as a stab in the back by President Barack Obama, after eight years of deteriorating relations during his presidency.

Now, as Israel scrambles to remove the knife from its back, the Vatican is ready to pour salt in the wound.

By meeting with Abbas on the eve of the Paris Peace Conference, where the international Israel-bashing is set to continue, Pope Francis is inserting himself into a politically charged situation, tipping the balance even further in the Palestinian direction. The timely meeting is tantamount to papal endorsement of the unsc resolution against Israel, as well as a blatant testimonial of the “righteousness” of the Palestinian cause.

While we cannot be sure about the subject matter of the forthcoming conversation between Abbas and the pope, recent history shows that it won’t serve Israel’s interest.

The second meeting between Francis and Abbas took place during the pope’s landmark visit to Israel in 2014. The visit itself was a response to Abbas’s invitation a year earlier, when they met the first time. Perhaps you recall the pope choosing to do a photo op at a portion of the Israeli security barrier. “In between scheduled engagements,” Trumpet editor in chief Gerald Flurry wrote in the August 2014 Trumpet issue, “the pope ordered his motorcade to make an unexpected stop in Bethlehem. He got out of his popemobile and made his way to a section of Israel’s security wall. This is an often-photographed section of the wall with heavy graffiti that compares Palestinian Bethlehem to the Jewish Warsaw ghetto. Near a spot where someone had very recently sprayed ‘Free Palestine,’ the pope touched the wall and began to pray. Of course, cameras were everywhere capturing that moment.”

The Jews had invited Pope Francis to Jerusalem. They had hoped he would bring his power of symbolism to a photo op at their holiest site, the Wailing Wall. But it was this security wall outside Bethlehem that received his attention and got all the publicity.

Later on in the trip, the pope met with Abbas and read a prepared statement referring to the Palestinian leader as “a man of peace and a peacemaker.”

“During Sunday mass on his trip,” Mr. Flurry continued, “Pope Francis prayed with Fouad Twal, a Palestinian archbishop who serves as the Catholic Church’s Latin patriarch of Jerusalem.” At this mass, Twal delivered a disturbing sermon. Writing in the Jerusalem Post, columnist Caroline Glick discussed its contents:

In his sermon, Twal accused Israelis of being the present-day version of Christ-killers by referring to the Palestinians as walking in the footsteps of the divine child, and likening the Israelis to King Herod. In his words, “We are not yet done with the present-day Herods who fear peace more than war, and who are prepared to continue killing.”

Instead of condemning the statement, the pope asked, “Who are we as we stand before the child Jesus? Who are we standing as we are before today’s children? Are we like Mary and Joseph, who welcomed Jesus and cared for Him with the love of a father and a mother? Or are we like Herod, who wanted to eliminate Him?”

Prayer at the Vatican

During his visit to Israel in 2014, the pope invited Israeli President Shimon Peres, as well as Abbas, to the Vatican in order to pray for peace. A month later, the three men assembled at the pope’s home in the Vatican and prayed for peace—a seemingly positive and unbiased attempt to bring together two warring leaders.

The landmark meeting ended with the Jewish and Palestinian leaders exchanging kisses on the cheek and then breaking ground to plant a peace-symbolizing olive tree.This was the first time the Vatican has ever hosted a prayer gathering of two leaders engaged in conflict. “I hope that this meeting will be a journey toward what joins us, to overcome what divides us,” Francis said. He added that the meeting is a response to people who want to live, not as enemies, but as brothers and sisters.Does the pope really believe Mahmoud Abbas wants to be a “brother” to Shimon Peres? Does Peres really believe that?


The next meeting came in May 2015 when Palestinian and Vatican officials signed a joint treaty. During Abbas’s visit to sign the agreement, the pope called him “an angel of peace,” according to reports at the time by the Associated Press, Reuters and Agence France-Presse. This was a bold title for a man leading the Palestine Liberation Organization, the notorious terrorist organization formerly headed by Yassar Arafat. However, even more disheartening for Israel was the fact that this treaty was the pope’s formal recognition of the “state of Palestine.”

Trumpet columnist Brad Macdonald wrote about the significance of this development in “Why Is the Pope Provoking War in Israel?”:

Gaining the support of humanity’s most respected and admired leader could be just the boost needed to get the project of Palestinian statehood over the finish line.For the Jewish state and its declining number of supporters, the Vatican’s decision was an enormous blow. “This move does not promote the peace process and distances the Palestinian leadership from returning to direct and bilateral negotiations,” Israel’s foreign minister said in a text message to the Associated Press. …Michael Freund, former deputy communications director in the Israeli prime minister’s office, also put it in dramatic terms in the Jerusalem Post. “[G]iven its sordid history of anti-Semitism, book-burnings, forced conversions and Inquisitions, the Catholic Church should think a hundred times over before daring to step on Israel’s toes,” he wrote. “If anything, the pope should be down on his knees pleading for forgiveness from the Jewish people and atonement from the Creator for what the Vatican has wrought over the centuries” (May 18).

Given the pope’s actions over the past three years, he clearly has no qualms about inserting himself into the Israeli-Palestinian political arena. He no doubt understands the optics of meeting with Abbas a day before the Paris Peace Conference begins; a conference where, with everything else horrific going on in the world, diplomats from 70 countries will meet to preserve the two-state solution between Israelis and Palestinians; a conference where, as Israeli Prime Minister Benjamin Netanyahu warned Tuesday, the U.S. likely intends to deliver one final salvo against Israel before President Obama leaves office.

And yet, the day before, the leader of the Palestinian cause will meet with the pope in the Vatican. As the previous three meetings have shown, they no doubt are working together to undermine the Jewish state. Abbas will likely go into the conference with a papal endorsement for his plan toward establishing a Palestinian state. It’s even possible he will proceed to Paris with marching orders from the pope as well.

The Trumpet has long called attention to the Vatican’s intrusion into the peace process, not just because of its overt pro-Palestinian bias, but because the Vatican has its own agenda.

The pope’s current support for the Palestinians is but a Trojan horse for the Vatican to pursue its own objectives in Israel and, specifically, Jerusalem.

The obvious truth is that Pope Francis and the Vatican do not support the presence of Muslims in Jerusalem any more than they do the presence of Jews. There are two simple reasons that the Vatican, for now, is making it appear that it supports a Palestinian state and greater Muslim influence over Jerusalem.First, supporting the Palestinians undermines Israel’s control over the Holy Land. When it comes to diminishing Israel’s grip on Jerusalem and its holy sites, the Vatican is quite happy for the Palestinians to do the gritty work. …Second, the Vatican’s endorsement of Palestinian statehood provides ideal cover as it pursues its own enduring ambition to wrest control of Jerusalem from the Jews and Muslims.

We can make such assertions as to Vatican intent based on both history and prophecy.

Historically, the Vatican led wars to capture Jerusalem—from the Muslims. In fact, there hasn’t been a single moment in the past 2,000 years when the Vatican sincerely endorsed Muslim control of Jerusalem. There have, however, been multiple occasions when the Vatican riled up Catholic warriors and dispatched them to the Holy Land to wrest control of it from the Muslims. Why would Pope Francis reject two millennia of Catholic history—even rejecting Catholic doctrine and tradition—and support Muslim sovereignty in the Holy Land?

On Saturday, the pope will meet with Abbas in a declaration of his support for the Palestinian cause. But behind the scenes, understand that the Vatican is working its own agenda that’s neither pro-Israeli nor pro-Palestinian, but pro-Catholic.

As we enter 2017, watch for the Vatican to get more involved in the peace process. As evidenced by his facilitating the Cuban deal between Washington and Havana, the pope is not shy about entering the political arena. His venture into the peace process will likely be even more overt.

Prophetically, the book of Daniel tells of one final crusade the Vatican will make into the Holy Land (Daniel 11:40-45; read also “The Dark Side to the Pope’s Visit to Jerusalem”). However, those same scriptures reveal that Catholic domination of Jerusalem will be short lived. As Mr. Flurry discussed in “The Last Crusade,” that very event is linked to the return of Jesus Christ and the establishment of His government in Jerusalem.