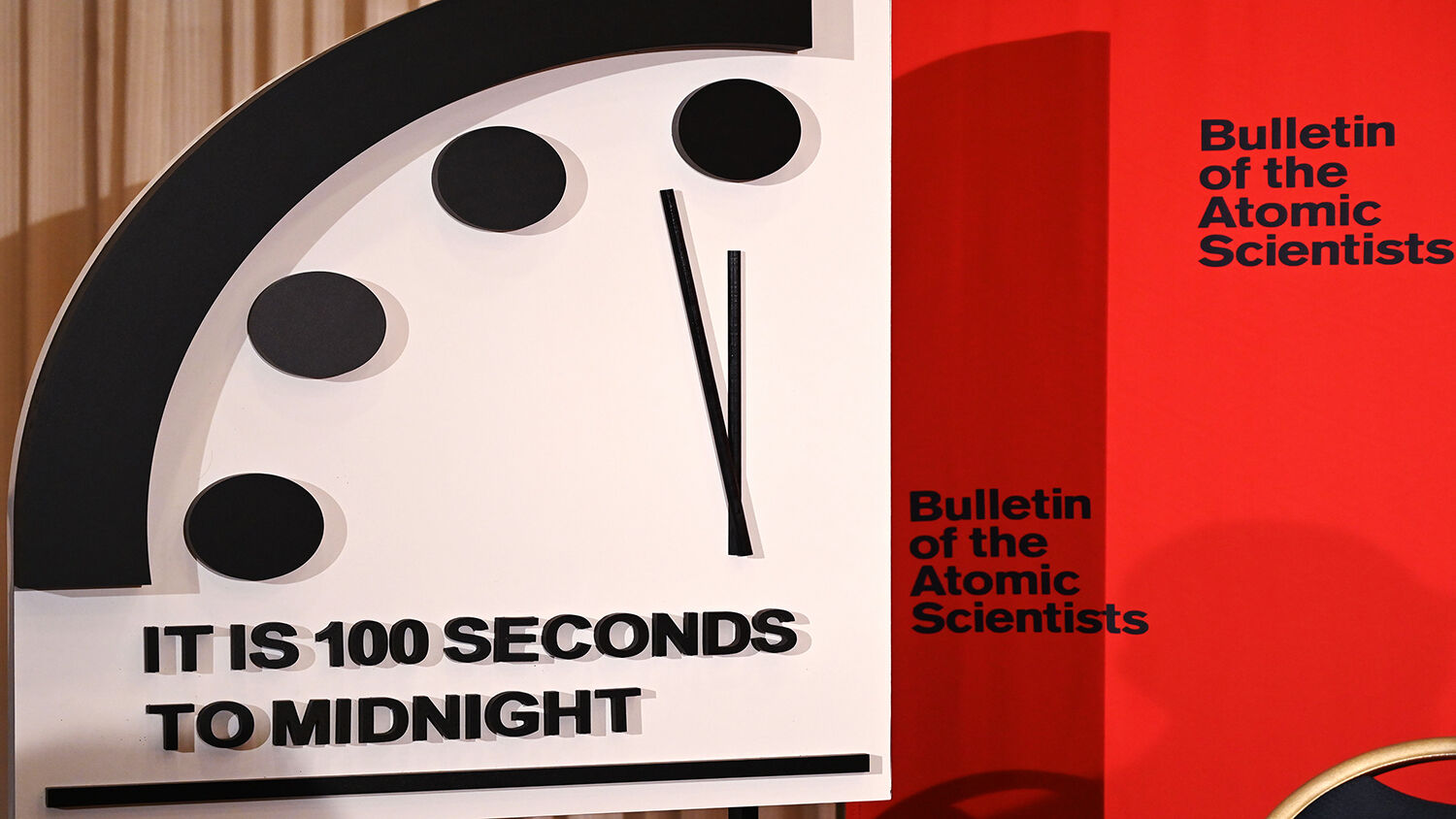 The Doomsday Clock reads 100 seconds to midnight at the National Press Club in Washington, DC on January 23.
EVA HAMBACH/AFP via Getty Images)

The global situation is ‘profoundly unstable.’

The end of the world just got a little closer. The Bulletin of the Atomic Scientists pushed the minute hand of their symbolic “Doomsday Clock” forward by 20 seconds on January 23, bringing the time to just 100 seconds until “midnight”—the symbolic hour of global nuclear destruction. This is the nearest the countdown has ever been to “doomsday” since the clock was developed almost 75 years ago.

“[T]he international security situation is now more dangerous than it has ever been, even at the height of the Cold War,” John Mecklin, the Bulletin’s editor in chief, wrote in a statement about the group’s decision to push the time forward.

Created in 1947, the Doomsday Clock is an emblematic indication of the likelihood that humanity will start war, with midnight representing the zero hour—worldwide destruction. The farthest from midnight the clock was ever set came in 1991 when the Cold War era concluded, and it was placed at 17 minutes to midnight. The nearest to zero hour it had ever been—before last week—was in 1953 when the clock sat at two minutes to midnight after the announcement that the United States and the Soviet Union had tested thermonuclear weapons within less than a year of each other. In 2018, it was again pushed forward to two minutes to midnight as North Korea’s nuclear activity reached a crisis point, and as other global powers grew more bellicose. The clock remained at the 11:58 mark throughout 2018 and 2019.

But now the team behind the clock says the threat is even more severe.

“In the nuclear realm, national leaders have ended or undermined several major arms control treaties and negotiations during the last year, creating an environment conducive to a renewed nuclear arms race, to the proliferation of nuclear weapons, and to lowered barriers to nuclear war,” Mecklin wrote. “Political conflicts regarding nuclear programs in Iran and North Korea remain unresolved and are, if anything, worsening. U.S.-Russia cooperation on arms control and disarmament is all but nonexistent.”

Faced with this daunting threat landscape and a new willingness of political leaders to reject the negotiations and institutions that can protect civilization over the long term, the Bulletin of the Atomic Scientists Science and Security Board today moves the Doomsday Clock 20 seconds closer to midnight—closer to apocalypse than ever.

The Bulletin calls special attention to flashpoints in Asia, highlighting the fact that it is home to five of the world’s nine nuclear armed powers: Russia, China, India, Pakistan and North Korea. Rising tensions in the Taiwan Strait, the South China Sea, Kashmir and the Korean Peninsula mean the region is dotted with potentially cataclysmic thermonuclear flashpoints.

There’s a lot to disagree with in the Bulletin’s reasoning. But the fact is we do live in dangerous times. In 2002, when the Doomsday Clock was pushed forward from nine to seven minutes to midnight, Trumpet editor in chief Gerald Flurry wrote about the importance of the move—and the shameful lack of attention it received. “The world should have jolted out of sleep at the news,” he wrote. “Headlines should have splashed across all the media. But no real alarm was sounded. The majority of the news media dismissed it. And many still slumber on as the world heads toward self-destruction.”

Mr. Flurry said the reason the symbolic move was so significant is because of what Bible prophecy says on the topic of a nuclear World War iii. “Nearly 2,000 years ago, Jesus Christ prophesied about this global state of affairs,” he wrote. He then quoted Christ’s words recorded in Matthew 24:21-22, which in the New Living Translation state: “For there will be greater anguish than at any time since the world began. And it will never be so great again. In fact, unless that time of calamity is shortened, not a single person will survive.”

Jesus Christ was talking about a time when the annihilation of all human life would be possible. This has everything to do with the Doomsday Clock. Yet how many theologians discuss these two verses?

Mr. Flurry explained that, though the setting of the Doomsday Clock forward pointed to tragically destructive times in the near future, it also indicated that the most hope-filled event in mankind’s history is remarkably close. In verse 22, just after Christ says that nuclear war at the end of this age will be so devastating that it could end all human life, He adds a vital detail: “But it will be shortened …” (nlt).

The nuclear world war that is now looming larger than ever on the horizon will be interrupted!

Before man detonates enough weapons to entirely eradicate himself, Jesus Christ will cut the war short. And just after that season of unprecedented death, He will bring in an epoch of unprecedented peace. Mr. Flurry continued:

Now, those seven minutes on the symbolic Doomsday Clock are down to just 100 seconds.

To understand more about how close mankind is to an unprecedentedly devastating nuclear war, and why Christ will intervene in the conflict before it extinguishes all human life, read Mr. Flurry’s free booklet Nuclear Armageddon Is ‘At the Door.’