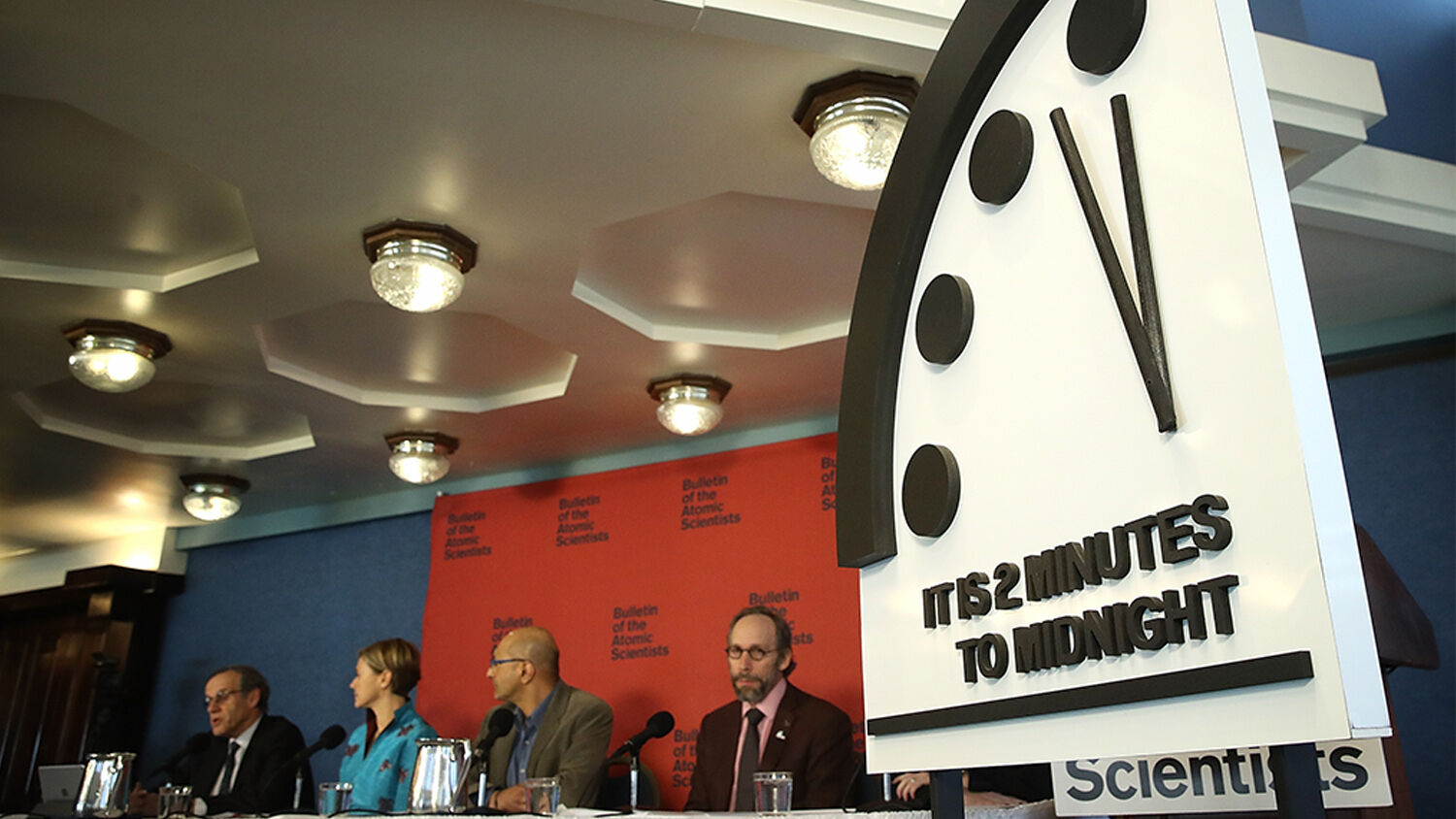 The Bulletin of the Atomic Scientists unveil the 2018 Doomsday Clock in Washington, D.C.
Getty Images

‘To call the situation dire is to understate the danger—and its immediacy.’

The minute hand of the symbolic Doomsday Clock was moved forward by 30 seconds on January 25, bringing the time to just two minutes until “midnight”—the symbolic hour of global nuclear destruction.

This is the nearest the countdown has been to “doomsday” in 65 years.

“[T]he world is not only more dangerous now than it was a year ago; it is as threatening as it has been since World War ii,” wrote Lawrence M. Krauss and Robert Rosner, physicists with the Bulletin of the Atomic Scientists that runs the Doomsday Clock.

Created in 1947, the Doomsday Clock is a symbolic measurement of the likelihood that mankind will begin nuclear war, with midnight representing the zero hour—global destruction. The farthest from midnight the clock has ever stood was in 1991 when the Cold War era ended, and it was set at 17 minutes to midnight. The nearest to the zero hour it has ever been—before yesterday—was in 1953 when the clock sat at two minutes to midnight following the announcement that the United States and the Soviet Union had tested thermonuclear devices within less than a year of each other.

“The Doomsday Clock is as close to midnight today as it was in 1953, when Cold War fears perhaps reached their highest levels,” Krauss and Rosner wrote.

“To call the situation dire is to understate the danger—and its immediacy,” the Bulletin of Atomic Scientists ceo Rachel Bronson said on Thursday.

“The greatest risks last year arose in the nuclear realm,” the Bulletin said in its report about the latest time change.

The Bulletin said the primary nation that has intensified the nuclear threat was North Korea, whose weapons development saw “remarkable progress during 2017.” The acceleration of Pyongyang’s tests “reflects new resolve to acquire sophisticated nuclear weapons,” it said, adding that North Korea now “has or soon will have capabilities to match its verbal threats—specifically, a thermonuclear warhead and a ballistic missile that can carry it to the U.S. mainland.” Pyongyang’s nuclear progress increased “risks to North Korea itself, other countries in the region, and the United States,” the Bulletin said.

But North Korea was far from the only player to contribute to the heightened nuclear threat.

The Bulletin also pointed to the Asia-Pacific region, where “tensions over the South China Sea have increased” and where “relations between the United States and China” have been “insufficient to reestablish a stable security situation.”

In South Asia, the Bulletin said risks increased due to Pakistan and India building “ever larger arsenals of nuclear weapons.”

The Bulletin also pointed to the Middle East, saying that Iran’s nuclear activities and “uncertainty about continued U.S. support for the landmark Iranian nuclear deal adds to a bleak overall picture.”

The Bulletin said that another reason for its move was “a breakdown in the international order.” The United States has increasingly “backed away from its long-standing leadership role in the world,” it wrote. “Neither allies nor adversaries have been able to reliably predict U.S. actions,” it said, which adds to geopolitical tensions.

Back in 2002, when the Doomsday Clock was set forward from nine to seven minutes to midnight, Trumpet editor in chief Gerald Flurry wrote about the deep significance of the move—and the lack of attention the news received: “The world should have jolted out of sleep at the news,” he wrote. “Headlines should have splashed across all the media. But no real alarm was sounded. The majority of the news media dismissed it. And many still slumber on as the world heads toward self-destruction.”

Mr. Flurry said the reason the move was so significant is because of what Bible prophecy says about a nuclear World War iii:

Nearly 2,000 years ago, Jesus Christ prophesied about this global state of affairs. Yet with His warning, He gave us great hope. “For then shall be great tribulation, such as was not since the beginning of the world to this time, no, nor ever shall be. And except those days should be shortened, there should no flesh be saved [Moffatt: saved alive]: but for the elect’s sake those days shall be shortened” (Matthew 24:21-22). Jesus Christ was talking about a time when the annihilation of all human life would be possible. This has everything to do with the Doomsday Clock. Yet how many theologians discuss these two verses?

Mr. Flurry explained that, though the setting of the Doomsday Clock forward pointed to dark times in the near term, it also indicated that the most hope-filled event in mankind’s history is very near:

Now, those seven minutes on the symbolic Doomsday Clock are down to just two.

To understand more about how near humankind is to an unprecedentedly devastating nuclear war, and why Christ will intervene in the conflict before it extinguishes all human life, read Mr. Flurry’s booklet Nuclear Armageddon Is ‘At the Door.’