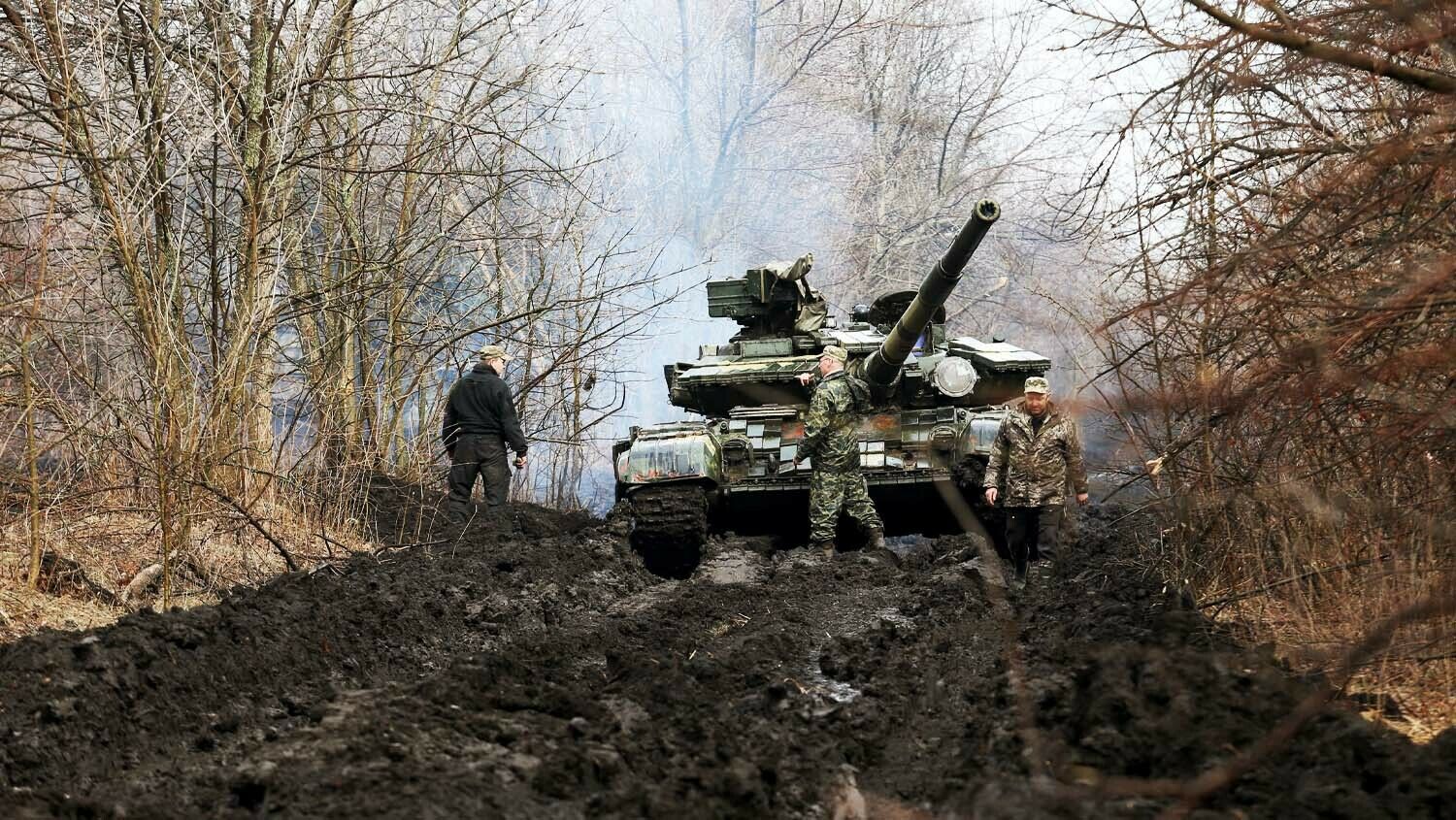 Ukrainian servicemen work on their tank close to the front line with Russia-backed separatists near Lysychansk, Lugansk, region on April 7.
STR/AFP/Getty Images

Germany’s denial of weapons to Ukraine and the Nord Stream project prove beyond doubt that something sinister is going on and that Germany is in on it.

Germany is blocking the delivery of weapons to Ukraine, President Volodymyr Zelenskyy said in a recent interview. Russia has massed troops on Ukraine’s borders. “Kyiv, therefore, needs to protect itself against a possible attack by Russia—and for that it needs weapons,” n-tv noted on December 14. “However, Berlin is putting a spoke in their wheel” (Trumpet translation throughout).

Zelenskyy said Berlin “recently prevented us from receiving deliveries of weapons systems for defense within the framework of nato [North Atlantic Treaty Organization] cooperation. Any democratic state that protects itself against aggression must have the right to acquire this type of defensive weaponry.” Since Ukraine is not a nato member, any member state can veto pending arms deliveries requested by the Ukrainian government. Under former German Chancellor Angela Merkel, Germany stopped the United States and Lithuania twice from delivering weapons to Ukraine.

This is not the first time Zelenskyy has complained about German obstruction. In a 2019 phone conversation he had with U.S. President Donald Trump, President Trump said: “I will say that we do a lot for Ukraine. We spend a lot of effort and a lot of time. Much more than the European countries are doing, and they should be helping you more than they are. Germany does almost nothing for you. All they do is talk, and I think it’s something that you should really ask them about. When I was speaking to Angela Merkel, she talks Ukraine, but she doesn’t do anything.”

Zelenskyy answered: “Yes, you are absolutely right. Not only 100 percent, but actually 1,000 percent.”

But it is getting worse. Ukrainian Defense Minister Oleksii Reznikov said: “They continue to build the Nord Stream 2 gas pipeline and at the same time block our [purchases of] defensive weapons. This is very unfair.”

It is indeed. “Nord Stream and Nord Stream 2 are key components of [Russian President Vladimir] Putin’s plan to tighten his grip on nations in Eastern Europe that used to be part of the Soviet Empire,” Trumpet editor in chief Gerald Flurry explained in “Germany and Russia’s Secret War Against America.” There are powerful German industrialists who are pushing for strong cooperation with Russia. As Mr. Flurry explained in his article, this cooperation threatens to break nato. This might be the far bigger goal that Putin is pursuing in pressuring Ukraine.

Germany’s denial of weapons to Ukraine and the Nord Stream project prove beyond doubt that something sinister is going on and that Germany is in on it.

“Since Russia invaded Ukraine and annexed Crimea in 2014, the threat of Moscow coming back for more has loomed large,” we noted on theTrumpet.com. “In the eight years since then, despite several ceasefire agreements, minor skirmishes between Ukrainian forces and Russia-backed insurgents have resulted in over 13,000 deaths. Headlines warning of an impending invasion of Ukraine have never been too far away.”

This terror shakes Kyiv, which requested additional defensive weapons from the West in November. “However, fearing an escalation of the conflict in eastern Ukraine, the West had long hesitated to sell weapons to Kyiv,” n-tv noted. “Eventually, the Ukrainian government managed to acquire some defense systems, including devices for U.S. antitank missiles and Turkish drones.”

The West seems to try to do everything it can to make Putin’s invasion of Ukraine as easy as possible. The less Ukraine has to defend itself, the sooner it will give in to Russia’s will and the less bloody the conflict will be, the West reasons. When asked if the U.S. would help Ukraine, Joe Biden said that, in the case of an invasion, the U.S. would respond with economic sanctions. Thus, Putin can rest assured that his military advances won’t have military consequences.

Ukraine, for its part, is doing all it can to increase its combat readiness, such as allowing a higher nato presence in the country. But nato doesn’t promise to protect a nonmember like Ukraine. Again Germany provides only words of solidarity that can hardly scare the Russian bear. “Aggressive action by Russia” toward Ukraine would have “massive economic and diplomatic consequences,” German Foreign Minister Annalena Baerbock said during a visit to Stockholm, Sweden.

Western leaders refuse military aid because they don’t want to provoke Russia—as if appeasement ever worked.

Germany’s reluctance to help Ukraine has devastating consequences for the world. It empowers Russia and reveals Germany’s willingness to sacrifice the lives of millions for its own economic prosperity.

Consider recent events in light of what Mr. Flurry warned in the November-December 2008 issue of the Trumpet:

While Germany’s industrialists actively work to break nato, they themselves lack a leader who has the guts to keep Putin in check. For this reason, we are watching for the rise of a strongman in Europe, as prophesied in Daniel 8: “And in the latter time of their kingdom, when the transgressors are come to the full, a king of fierce countenance, and understanding dark sentences, shall stand up” (verse 23).

Daniel is an end-time book (Daniel 12:4, 9). Daniel 11:44 says this leader will be troubled by “tidings out of the east and out of the north.” Prophecy clearly shows that once Germany and Russia successfully break America’s dominance, the two powers will clash with each other. These prophecies, along with counterparts in the book of Revelation, are fully explained in our free booklet Russia and China in Prophecy.