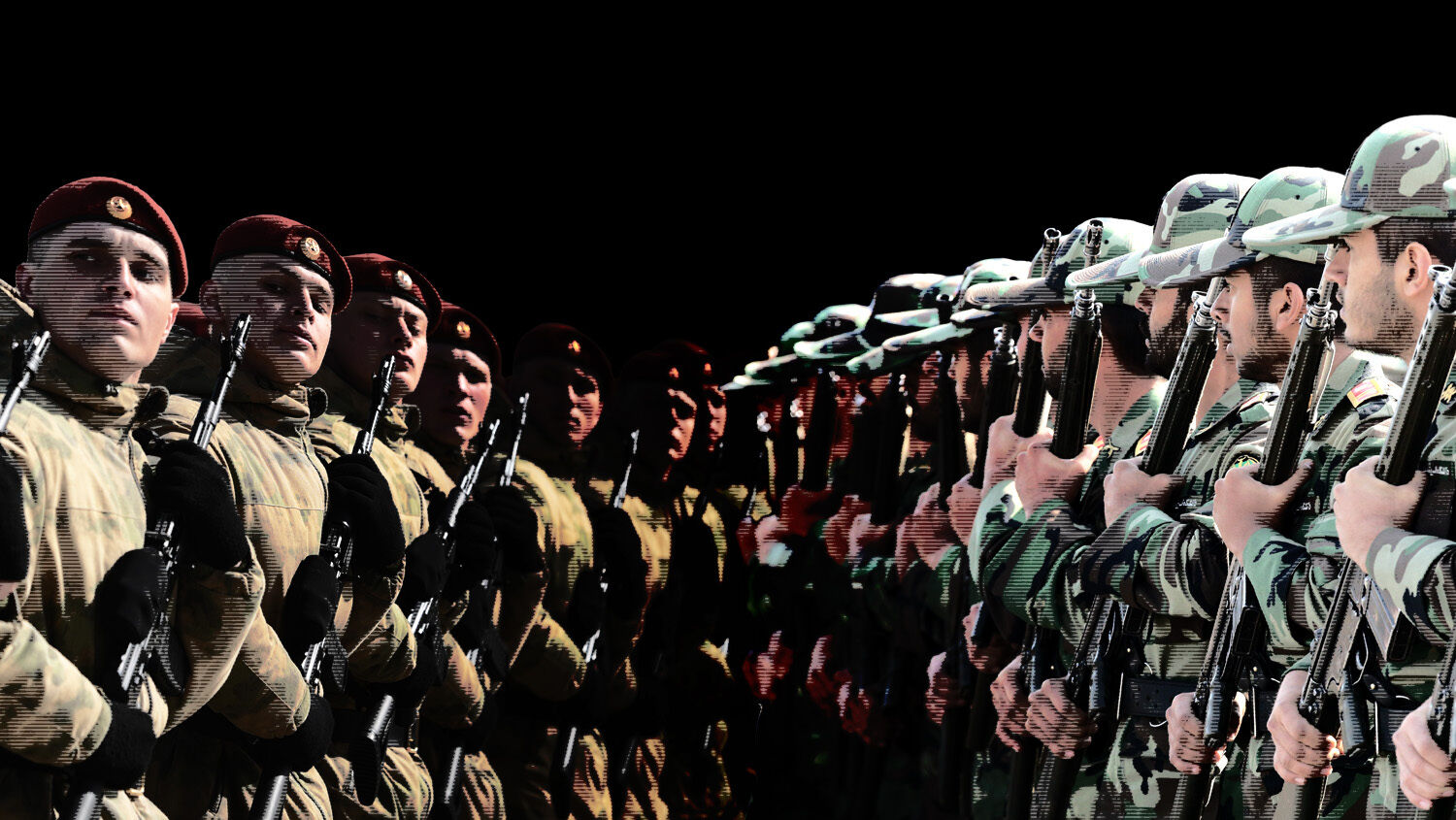 Russia’s war on Ukraine has forced the world to choose sides. Europe and the West have responded to the full-scale invasion with sanctions and threats. Iran has seen an opportunity to strengthen its relationship with Vladimir Putin’s Russia. The Iranians are lending Putin much-needed support and are receiving his support in return for achieving their own goals.

This partnership is yielding a stunning result: Iranian drones are now striking targets in Ukraine, Iranian troops are now in the war zone, and thousands of Iranian missiles will soon rain down on Ukrainian cities.

Iran is now officially at war in Europe.

The Trumpet has warned for years about the Russia-Iran partnership because it fulfills several Bible prophecies written millenniums ago. The war in Ukraine will pale in comparison to the shocking war these events are leading to.

Seeds of an Alliance

Russian-Iranian relations have a long and storied history.

During the Cold War from the 1940s to the early 1990s, the two nations had an uneasy relationship. Iran was allied with the United States until the 1979 Islamic Revolution, which deposed the monarch and installed the radical regime of Ruhollah Khomeini. Iran then began its strategy of building a Shiite Islamic empire to dominate the Middle East. During the resulting Iran-Iraq War (1980–1988), the Soviet Union supplied weapons to both sides of the conflict. After the ussr collapsed in 1991, Russia’s relationship with Iran improved. Iran was a natural strategic partner to help control Central Asia and the oil-rich Middle East. In the 1990s, Russia was instrumental in helping Iran develop its nuclear program.

When he became Russia’s president in 2000, Vladimir Putin began a more deliberate policy of strengthening relations with Iran. Despite their differences, these nations share the goal of overthrowing the U.S.-dominated global order.

In 2011, the eruption of civil war in Syria signaled a new era of close military and strategic operations between the two countries. Both nations would benefit from preserving the government of Syrian President Bashar Assad: Syria offers a port in the Mediterranean and military bases to expand influence in the region. On Aug. 16, 2016, Russian Tupolev-22M3 long-range bombers took off from Iranian airfields and inflicted devastating strikes against Syrian rebels in Aleppo.

Later that year, Russia fulfilled an $800 million deal from 2007 and completed delivery of S-300 units to Iran. This advanced air-defense system can strike aircraft at a range of 120 miles and ballistic missiles at a range of 30 miles. This significantly increased Iran’s ability to defend against potential attacks, particularly against its nuclear program. (This was made possible by the U.S. damaging its own interests under the 2015 Joint Comprehensive Plan of Action, orchestrated by Barack Obama.)

Interestingly, Putin held a meeting with Iranian economic leaders in July 2022, five months after launching his full-scale invasion of Ukraine.

The economic sanctions imposed on Russia have only brought these two nations closer together. Echoing their military cooperation in Syria, Iran is now helping Russia in its war in Europe by providing attack drones. In “Iran Is Now at War With Ukraine,” Foreign Policy reported: “The Shahed-136 has helped Russia damage around 40 percent of Ukraine’s electricity infrastructure, affecting half the country’s nonnuclear power generation capacity …” (Oct. 26, 2022). These drones fly into targets kamikaze-style and are effective at destroying stationary targets.

For centuries, Europeans have fought wars in the Middle East. Now Iranians are fighting a war in Europe.

This is historic. Iran hasn’t been involved in Europe like this since the Persian Empire’s wars with the ancient Greeks in the fifth century b.c.

Many analysts see Russia’s increasing dependence on Iranian equipment as an acknowledgment of its own military’s shortcomings. Iran is not the only foreign supporter of Russia’s Ukraine war. But Iran has real-world war experience most of Russia’s allies do not have. Tehran has plenty of practice fighting U.S. military technology in the Middle East. Other Russian allies haven’t been as staunch in their support. (For example, at the beginning of the war, China sent Ukraine over $2 million worth of humanitarian aid.) Moscow knows this and is likely turning to Iran more and more out of desperation.

Russia is one of the world’s great powers. Iran is an isolated pariah state. Both are enemies of the West, and Russia normally supports Iran in its activities. That the tables can turn so fast and Iran can become Russia’s sponsor shows how powerful Tehran has become.

This is putting Europe on edge. The European Union has adopted sanctions on Iran for its actions. More sanctions are apparently on the way. Czech Prime Minister Petr Fiala, whose government holds the EU’s rotating presidency, accused Iran of complicity in the “murder” of “innocent Ukrainian citizens.”

The United Kingdom, France and Germany have taken things a step further: They are calling for the United Nations to investigate Iran for breaching the controversial 2015 nuclear deal. Europe has been urging America to rejoin the jcpoa after having left it in 2018. That Europe itself is now going after Iran for breaking the deal shows how little it trusts Tehran.

Furthermore, Europe is already one of Ukraine’s biggest sponsors of money and weapons. Iran is turning into Russia’s main sponsor of at least weapons. This means the biggest war in Europe since World War ii is literally a proxy war between the EU and Iran.

The Trumpet has followed Iran-Europe relations for decades. This is because of a prophecy in the biblical book of Daniel. “And at the time of the end shall the king of the south push at him: and the king of the north shall come against him like a whirlwind, with chariots, and with horsemen, and with many ships; and he shall enter into the countries, and shall overflow and pass over. He shall enter also into the glorious land, and many countries shall be overthrown …. He shall stretch forth his hand also upon the countries: and the land of Egypt shall not escape. But he shall have power over the treasures of gold and of silver, and over all the precious things of Egypt: and the Libyans and the Ethiopians shall be at his steps” (Daniel 11:40-43).

Knowing who the king of the north is helps identify who the king of the south is. It is a powerful empire located to the south of Europe. The geographic context of the prophecy shows this to be somewhere in the Middle East. It has a “pushy,” provocative foreign policy. It has influence over (but does not directly control) such Middle Eastern and North African nations as Egypt, Libya and Ethiopia.

The Trumpet identifies the king of the south as radical Islam led by Iran.

For years, the Trumpet has watched for Iran to “push” at Europe. Radical Islamist terrorist attacks are a perennial migraine for Europe. Europe and Iran sponsor rival sides in the Syrian civil war. Iran helped the Taliban push the West—including Europe—out of Afghanistan. Europe and Iran are by no means close.

Daniel prophesies that Iran will “push” at Europe. It will push and push until Europe strikes back. What happens then?

“[T]he king of the north shall come against him like a whirlwind, with chariots, and with horsemen, and with many ships; and he shall enter into the countries, and shall overflow and pass over. He shall enter also into the glorious land, and many countries shall be overthrown …” (verses 40-41).

Europe’s counterattack will be so violent it will wipe Iran off the map. Why does Europe respond in such a fashion? Because it sees Iran as a serious threat.

Iran sponsoring the biggest European war since World War ii shows how much of a threat it is. It won’t be long before Europe decides to face Iran head-on. The Bible prophesies that this coming clash will impact not only Europe and the Middle East but the whole world.

A clash of civilizations?

Could a 2,500-year-old Bible passage reveal the fate of Europe and the Middle East? Our free booklet The King of the South will show you. Your free copy is waiting for you.