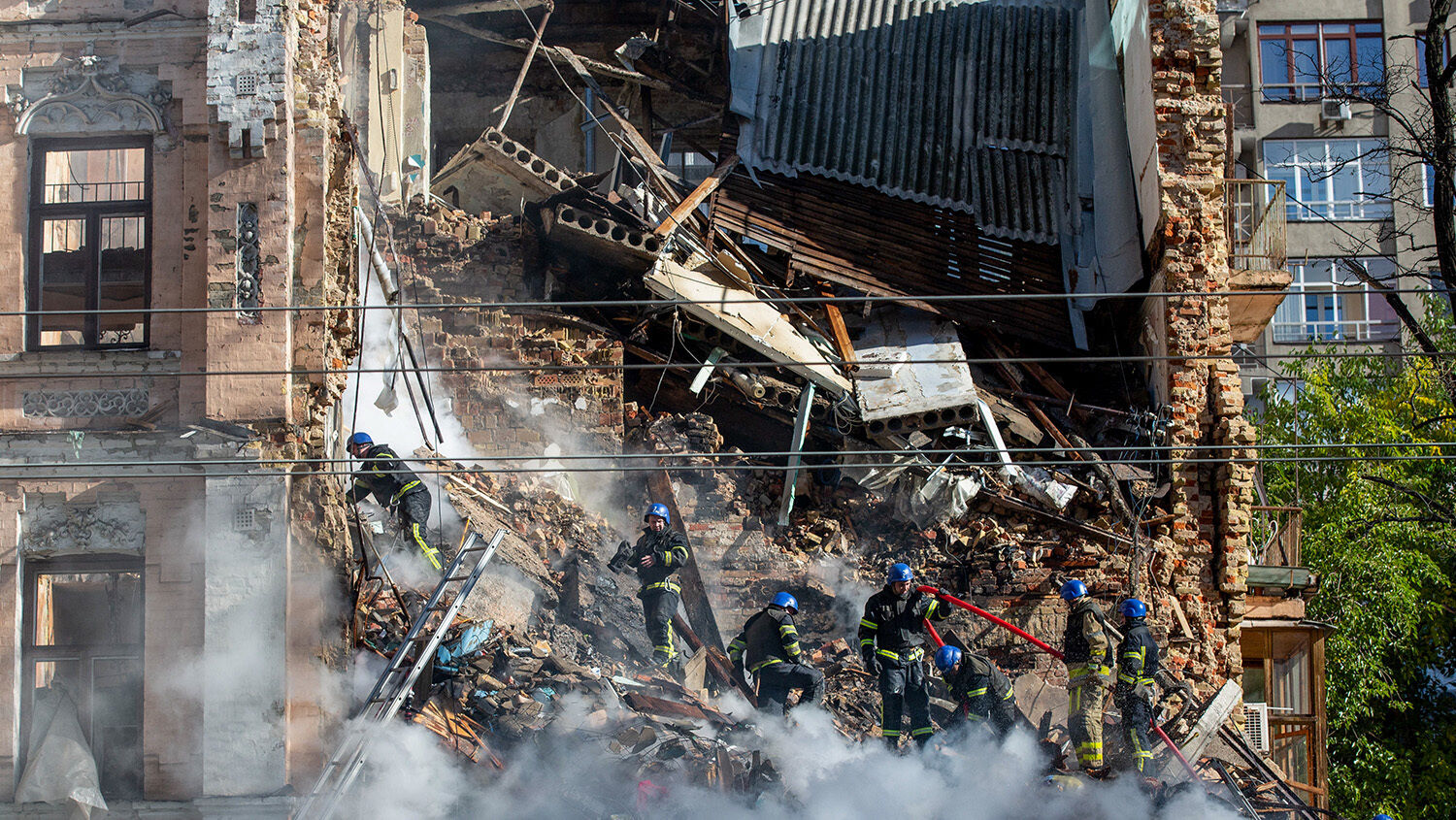 Ukrainian rescuers work at the site of a residential building in central Kyiv destroyed by a Russian drone strike, which local authorities consider to be Iranian-made unmanned aerial vehicles Shahed-136.
Photo by Oleksii Chumachenko/SOPA Images/LightRocket via Getty Images

Iran and Europe have been at loggerheads with each other for a very long time. Between its controversial nuclear program, its involvement in the Syrian civil war and its global terrorist activities, Iran has a habit of getting under Europe’s skin. But Iran is a faraway pariah state on the shores of the Persian Gulf. Europe may butt heads with Iran through proxy militias in the Middle East, or through Iranian terror sponsorship, but Iran can’t pose a direct threat to Europe militarily.

When Russian President Vladimir Putin launched his “special military operation” against Ukraine in February, many felt Ukraine had no chance. Over half a year has passed since then. Not only has Ukraine not been conquered, but Kyiv has humiliated the Russian military on the battlefield several times. Granted, this is mostly because of Ukraine’s access to weapons from America and Europe. But in his effort to turn the tide, Putin has been looking for foreign weapons himself. And Iranian Supreme Leader Ali Khamenei is more than happy to send them.

The main weapon that has everybody on edge is the Shahed-136 drone. Often dubbed “kamikaze drones,” after Japanese suicide aircraft in World War ii, these drones are meant to explode on impact. The Ukrainian government claims to have shot down the majority of these drones used by Russia. Yet they are also extremely cost-effective, costing only about $20,000 to manufacture one. (By comparison, one Kalibr cruise missile, which Russia has also used in Ukraine, costs $6.5 million to make.) Their affordability means the Shahed-136 can be deployed in large numbers, overwhelming air defenses.

“It’s a weapon that ignites the air,” said Olexandr Krivobog, a police bomb disposal expert from the Ukrainian city of Mykolaiv. “Even if the drone itself does little damage to the building, there’s a high probability of a flammable explosion that will cause a massive devastation.”

Russia has been targeting civilian infrastructure. Earlier this month, it sent a barrage of Shahed-136 drones (called the Geran 2 by the Russians) that took out about 30 percent of Ukraine’s power stations. Ukraine experienced its first nationwide electricity blackouts since the war started.

Video of an #Iran Shahed-36 drone targeting a civilian area in #Ukraine. That is a war crime. pic.twitter.com/D74aOE8KFd

The Shahed-136 isn’t the only weapon Tehran is supplying Moscow. The Mohajer-6 drone is a more conventional drone that can deploy guided bombs and short-range missiles and perform surveillance work. The Washington Post reported October 16 that Iran may be planning to sell surface-to-surface missiles to Russia. Iran is also reportedly supplying the Russian military with body armor and helmets.

On September 23, anti-aircraft fighters of the “Southern” Air Command of the Air Force of the Armed Forces of Ukraine shot down a multi-purpose strike UAV of Iranian production “Mohajer-6”, designed for reconnaissance, surveillance, reconnaissance, and fire damage. pic.twitter.com/K5zyn70LYv

Iranian-Russian collaboration doesn’t stop there. The Islamic Revolutionary Guard Corps (irgc) is reportedly on the ground in Russia-occupied Crimea training Russians to use the drones. According to the United States State Department, Tehran has already trained Russian officials inside Iran to operate the drones. The irgc may also be present in Belarus, Putin’s puppet state, which he used as a launch pad against Ukraine. The Ukrainian military claims to have killed Iranians in its strikes against Russia.

Iran is often called the world’s number one state sponsor of terrorism. Iran’s goal is to export its Islamic revolution worldwide. It sponsors terrorist proxies from Gaza to Lebanon to Syria to Iraq to Afghanistan to Yemen to Somalia to Ethiopia. Many Iranian proxies are powerful enough to control their own states. Iran also sponsors terrorist attacks globally, as demonstrated by the recent stabbing of Salman Rushdie in the U.S.

Many analysts see Russia’s increasing dependence on Iranian equipment as an acknowledgement of its own military’s shortcomings. Iran is not the only foreign supporter of Russia’s Ukraine war. But Iran has real-world war experience most of Russia’s allies do not have. Tehran has plenty of practice fighting U.S. military technology in the Middle East. Other Russian allies haven’t been as staunch in their support. (For example, at the beginning of the war, China sent Ukraine over $2 million worth of humanitarian aid.) Moscow knows this and is likely turning to Iran more and more out of desperation.

This is historic. Iran hasn’t been involved in Europe like this since the Persian Empire’s wars with the ancient Greeks in the fifth century b.c.

Furthermore, Russia is one of the world’s great powers. Iran is an isolated pariah state. Both are enemies of the West and Russia normally supports Iran in its activities. That the tables can turn so fast and Iran can become Russia’s sponsor shows how powerful Tehran has become.

This is putting Europe on edge. The European Union has adopted sanctions on Iran for its actions. More sanctions are apparently on the way. Czech Prime Minister Petr Fiala, whose government holds the EU’s rotating presidency, accused Iran of complicity in the “murder” of “innocent Ukrainian citizens.”

The United Kingdom, France and Germany have taken things a step further: They are calling for the United Nations to investigate Iran for breaching the controversial 2015 nuclear deal. Under the deal, Iran would be free of international sanctions in exchange of partially curbing its nuclear program. The U.S., UK, France, Germany, Russia and China were all parties to the agreement. The Europeans accuse Iran of breaching its commitments to curb its proliferation of ballistic missiles, as per the deal. If London, Paris and Berlin get their way, Iran will be under previously-removed sanctions.

The U.S. withdrew from the Joint Comprehensive Plan of Action (jcpoa) in 2018. Iran has since openly ramped up its nuclear program. Europe has been urging America to rejoin the jcpoa. That Europe itself is now going after Iran for breaking the deal shows how little it trusts Tehran.

Furthermore, Europe is already one of Ukraine’s biggest sponsors of money and weapons. Iran is turning into Russia’s main sponsor of at least weapons. This means the biggest war in Europe since World War ii is literally a proxy war between the EU and Iran.

The Trumpet has followed Iran-Europe relations for decades. This is because of a prophecy in the biblical book of Daniel. “And at the time of the end shall the king of the south push at him: and the king of the north shall come against him like a whirlwind, with chariots, and with horsemen, and with many ships; and he shall enter into the countries, and shall overflow and pass over. He shall enter also into the glorious land, and many countries shall be overthrown …. He shall stretch forth his hand also upon the countries: and the land of Egypt shall not escape. But he shall have power over the treasures of gold and of silver, and over all the precious things of Egypt: and the Libyans and the Ethiopians shall be at his steps” (Daniel 11:40-43).

Knowing who the king of the north is helps identify who the king of the south is. It is a powerful empire located to the south of Europe. The geographic context of the prophecy shows this to be somewhere in the Middle East. It has a “pushy,” provocative foreign policy. It has influence over (but does not directly control) such Middle Eastern and North African nations as Egypt, Libya and Ethiopia.

The Trumpet identifies the king of the south as the Islamic Republic of Iran.

For years, the Trumpet has watched for Iran to “push” at Europe. Radical Islamist terrorist attacks are a perennial migraine for Europe. Europe and Iran sponsor rival sides in the Syrian civil war. Iran helped the Taliban push the West—including Europe—out of Afghanistan. Europe and Iran are by no means close.

Daniel prophesies that Iran will “push” at Europe. It will push and push until Europe strikes back. What happens after that?

“[T]he king of the north shall come against him like a whirlwind, with chariots, and with horsemen, and with many ships; and he shall enter into the countries, and shall overflow and pass over. He shall enter also into the glorious land, and many countries shall be overthrown …” (verses 40-41).

Europe’s counterattack will be so violent it will wipe Iran off the map. Why does Europe respond in such a fashion? Because it sees Iran as a serious threat.

Iran sponsoring the biggest European war since World War ii shows how much of a threat it is. It won’t be long before Europe decides to face Iran head-on. The Bible prophesies that this coming clash will impact not only Europe and the Middle East but the whole world.

To learn more, please read our Trends article “Why the Trumpet Watches Iran and Europe Heading for a Clash of Civilizations.”