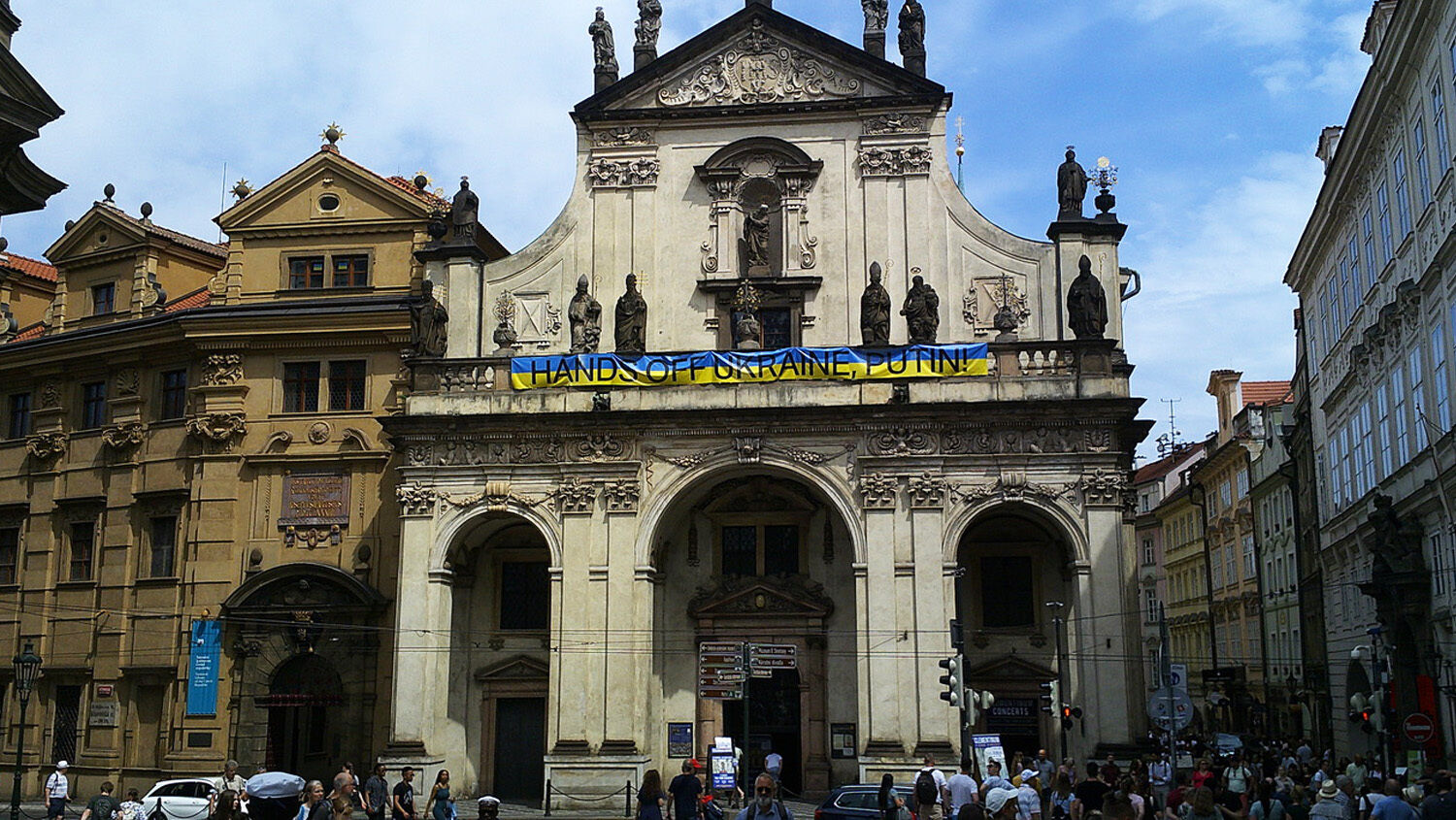 A pro-Ukraine banner on the Church of St. Salvator in Prague, Czech Republic
Trumpet

The land that is today the Czech Republic was once home to tens of thousands of Jews. But the Nazis, after taking over what was then Czechoslovakia, wiped them out.

The Pinkas Synagogue now serves as a Holocaust memorial. The walls in this otherwise empty building are almost completely covered with the names of the 80,000 Jews from the area whom the Nazis murdered. Prague’s Jewish Museum estimates the Czech Republic today is home to less than 6,000 Jews.

The Jewish district shows that, for countries in Central and Eastern Europe, genocide hits close to home. Genocide is within living memory, a major part of the country’s recent history. And reminders of it are there for all to see.

But is genocide restricted to Eastern Europe’s past? An 8-hour drive east of Prague is the Ukrainian border. Here are some recent headlines:

Eastern Europe has different political traditions from the West. Since the fall of communism, the region has embraced conservative governments hostile to traditional liberal causes. Some of Eastern Europe’s leaders were close to Russian President Vladimir Putin before the Ukraine war. All of this alienated Europe’s leaders in the east from the “eurocrats” in Brussels.

But Putin’s war in Ukraine—and the reports of genocide he is bringing—is changing all of this.

Czech President Miloš Zeman is a good example. In office since 2013, he was considered one of Putin’s closer friends in Europe. Before the current invasion, he called the war in the Donbas “a civil war between two groups of Ukrainian citizens,” echoing what the Russian government called the conflict. In 2014, an arms depot in the Czech town of Vrbetice exploded. The Czech government (mostly run by the prime minister rather than the president) concluded that Russian military intelligence agents blew up the building. Prime Minister Andrej Babiš claimed there was “irrefutable evidence” against Moscow. But Zeman tried to downplay Russia’s involvement in a televised address. In 2015, following Russia’s 2014 annexation of Ukraine’s Crimea, Zeman went to Moscow to celebrate Russia’s Victory Day. He was the only European Union leader to visit.

The Ukraine war has changed all of this. Zeman called Putin’s actions a “crime against peace.” On February 24, the day of the invasion, he called for Russia to be cut off from the swift banking system. “It is time to reach for much tougher sanctions than those originally planned, by which I mean above all a sanction in the area of the so-called swift,” he said. He awarded Ukrainian President Volodymyr Zelenskyy with the Czech Republic’s most prestigious award, the Order of the White Lion. Zeman cited Zelenskyy’s “courage and bravery” for standing up to Russia. He’s even called for Putin to face trial for war crimes.

Putin’s invasion turned one of his closest associates in the EU into a vocal opponent.

The Czech people’s support for Ukraine is extremely evident if one walks through downtown Prague. There seem to be more Ukrainian flags displayed on the street than Czech flags. In the city’s prestigious Obecní dům concert venue, a large Ukrainian flag is propped up center stage in the main hall.

The Czech Republic isn’t the only country in the region changing sides. So is Poland.

Poland has been ruled by the conservative Law and Justice (PiS) party for years. Unlike the Czech president, PiS has little love for Vladimir Putin. Yet the government in Warsaw has been enacting conservative policies that are anathema to the EU’s ruling elites. One of the biggest issues revolves around the “rule of law” controversy. Poland’s judiciary previously appointed judges and justices itself. PiS changed the law so that the legislature—currently dominated by conservatives—would nominate judges instead. This has allowed the government to get the courts’ approval for its conservative agenda, like banning abortion. These kinds of policies have drawn Warsaw into battles with Brussels. Last year, the EU suspended Poland’s share of the EU’s covid-19 recovery fund.

Poland has a long history of being trampled on by Russia. So it’s no surprise Poland is among the countries most eager to help Ukraine. Poland has been generous in supplying Ukraine with weapons. It has also accepted over a million Ukrainian refugees, according to conservative estimates.

Brussels has been fining Warsaw €1 million (us$1,047,835) a day since October for the rule-of-law issue. That wasn’t enough to get Poland to back down. But last month, the Polish government altered some of its controversial judicial reforms. Earlier this month, European Commission President Ursula von der Leyen announced plans to remove Poland’s covid recovery fund suspension. The issue still isn’t completely settled.

Poland has also announced it’s ready to move forward with the EU’s “global minimum corporate tax” scheme. Last year, 136 countries at an Organization for Economic Cooperation and Development meeting agreed to a global minimum corporate tax of 15 percent. Poland, however, disagreed with the scheme. Warsaw’s veto prevented the EU’s adoption of the proposal. But Poland is now apparently ready to move forward and adopt the proposals.

The timing of Poland’s recent changes—and Brussels’ rapprochement—is interesting. It looks like Poland is trying to get on Europe’s good side amid the tensions with Russia.

Not all of Eastern Europe’s leaders are making these kinds of turnarounds. Hungarian Prime Minister Viktor Orbán is a notable exception. But much of Eastern Europe has been in what seems like a perpetual squabble with Brussels. The Ukraine war is causing much of this to melt away.

The Russian president’s unprovoked invasion of Ukraine has united Europe and the trans-Atlantic sphere like nothing since the fall of the Berlin Wall, as even his erstwhile allies on the Continent abandoned him over the weekend.

From Sofia to Stockholm, Europe’s internal divisions over how to react to Putin’s aggression have melted away in recent days as the historic dimensions of the invasion—the greatest challenge to the West’s security architecture in decades—sank in.

Months later, and these kinds of statements are becoming more and more true.

Jean Monnet, one of the EU’s “founding fathers,” said, “Europe will be forged in crisis, and will be the sum of the solutions adopted for those crises.” Before Ukraine, Europe looked like it would be divided into two camps: a conservative, populist east and a liberal, progressive west. Then came Ukraine. Nothing short of Russian tanks and bombs could unite Eastern and Western Europe. But no matter how extreme the catalyst is, it is working.

Trumpet editor in chief Gerald Flurry wrote about Russia’s actions in Ukraine: “The move shocked the world. Most of all, it shocked Europe. In a stroke, Russian President Vladimir Putin redrew Ukraine’s borders. … Russia succeeded in swallowing another nation’s sovereign territory—and the world did almost nothing. This terrifies Eastern Europeans. It is the kind of action that many assumed had ended forever once the Soviet Union fell.”

Mr. Flurry wrote this in 2014 when Russia annexed the Crimean Peninsula. Yet with the current war, that article, “The Crimean Crisis Is Reshaping Europe!”, has never been timelier.

We have been prophesying for around 70 years that Eastern Europe would become a vital part of a new European superpower—a resurrection of the Holy Roman Empire. This prophecy is directly related to the Crimean crisis! The fear you see in Europe because of events in Crimea is going to cause 10 leaders in Europe to unite in a sudden and dramatic way—and in precise accordance with the Bible’s description of that European empire!

In our February edition, I wrote about Ezekiel 38:2, which talks about the prince of Russia and the trouble he will cause in this end time (“Is Vladimir Putin the Prophesied ‘Prince of Rosh’?”). The way that prophecy is coming to pass is having a fierce impact on Europeans far more than on any other people in the world. …

That prophesied “prince of Rosh” is a powerful man, and he is having a forceful effect on Europe. The reaction within Europe to this crisis is something you need to watch, because it is shaping and molding the future composition of the Holy Roman Empire! It is making European leaders move urgently to tie together this Holy Roman Empire that we have been prophesying about for so many years.

The Trumpet bases its European analysis on several biblical prophecies. Revelation 13 speaks of a “beast” (verse 1), a biblical symbol for an empire (see Daniel 7). This beast has “great authority” and an unstoppable military (Revelation 13:2, 4). It has a history of persecuting true Christians, and “power (authority) was given him over all kindreds, and tongues, and nations” (verse 7). Biblical and secular history show this to be the Roman Empire. (Please request a free copy of Herbert W. Armstrong’s booklet Who or What Is the Prophetic Beast? for more information.)

Rome fell centuries ago. But a related prophecy in Revelation 17 shows this isn’t only about ancient history.

Revelation 17, like chapter 13, is about a “beast” (verse 3). But unlike the previous beast, this one is ridden by a “woman,” a biblical symbol for a church (Ephesians 5:22-32; 2 Corinthians 11:1-3). This beast has seven heads, a symbol for seven kings of this empire (Revelation 17:10). This is a prophecy of seven resurrections of the Holy Roman Empire, each time presided over by an influential church.

History shows that six of these resurrections have come and gone. The last one was fulfilled by Adolf Hitler’s Third Reich. That means there is one more to come. The Bible reveals that the last resurrection will be composed of 10 independent nations combining their power into one superstate (verses 12-14).

Other pertinent prophecies, like Daniel 2:42-44, show that these 10 kings would have “iron and clay” unity. It’s going to take a lot to bring these nations together. As the past few months demonstrate, it even takes a major war on Europe’s eastern border. But once this unity takes place, the Bible prophecies that this new Europe will shake the world.

This last resurrection will include victims of the sixth resurrection. This is why the Trumpet watches what happens in countries like the Czech Republic and Poland. The exact identities of these 10 kings isn’t necessarily known. But current events in places like Prague and Warsaw are certainly noteworthy.

To learn more, please read “The Crimean Crisis Is Reshaping Europe!” and request a free copy of Who or What Is the Prophetic Beast?

Correction: An earlier version of this article stated that there were five synagogues still functioning in Prague. In fact there are six synagogues, five of which are open to the public. The Trumpet regrets the error.