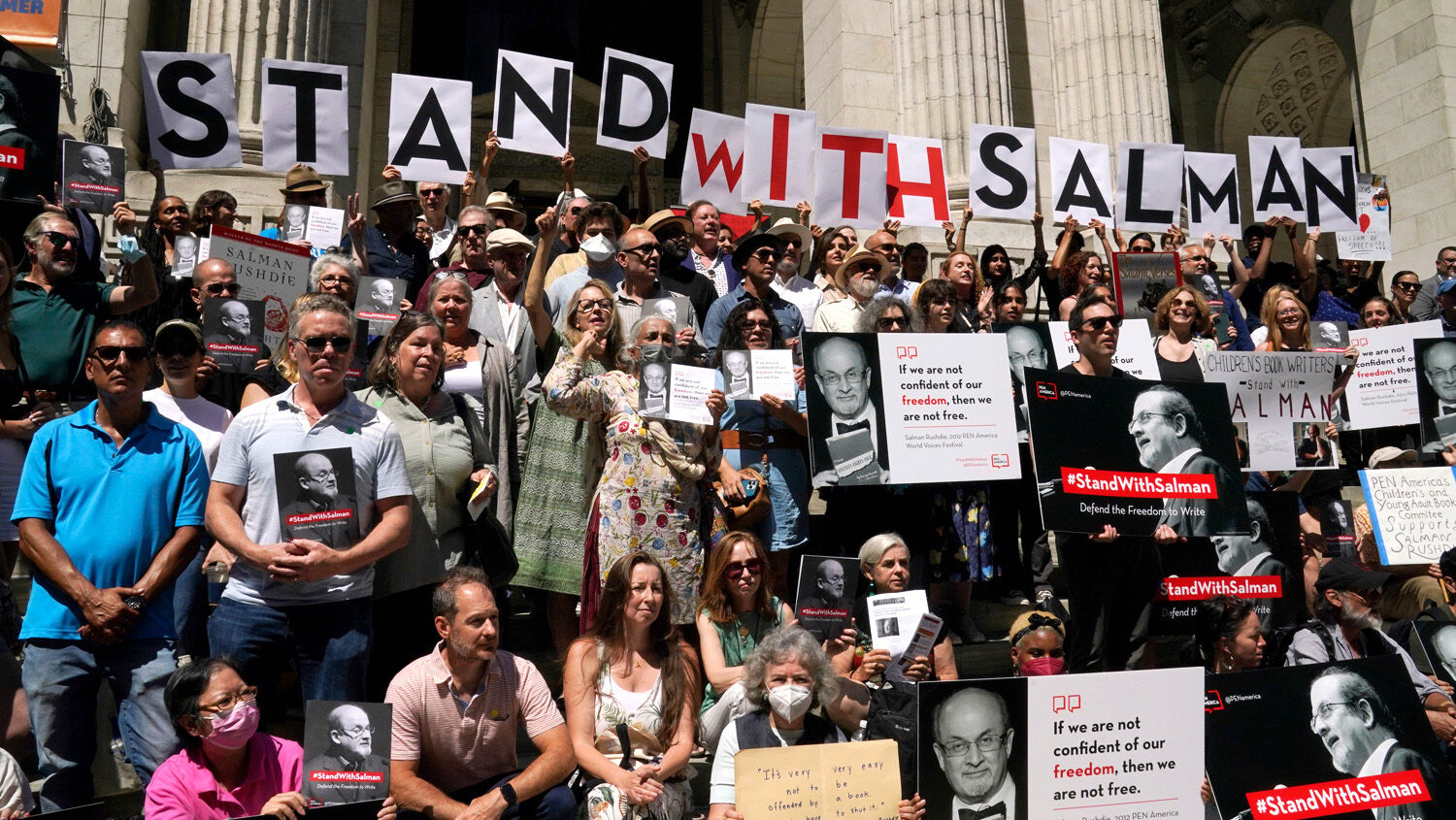 Writers gather during an August 19 rally for free expression outside the New York Public Library to show solidarity for British author Salman Rushdie one week after he was stabbed.
TIMOTHY A. CLARY/AFP via Getty Images

The attack reveals the ‘king’ of radical Islam.

Prominent author Salman Rushdie was stabbed just before giving a lecture at the Chautauqua Institution in New York on August 12. His 24-year-old attacker, Hadi Matar, is of Lebanese descent but from New Jersey. Matar stabbed Rushdie multiple times in various locations, including the liver and the eye. Rushdie is currently in a hospital recovering. He had to be placed on a ventilator and his agent said he was likely to lose an eye. Rushdie has since been taken off the ventilator and can speak again.

Rushdie, originally from an Indian Muslim family, is controversial in the Islamic community because of his 1988 book The Satanic Verses. The novel depicts Islam’s Prophet Mohammed as Mahound (a derogatory Crusader-era name). In The Satanic Verses, instead of receiving revelations from the archangel Gabriel (per Muslim tradition), Mahound puts his own words into Gabriel’s mouth. Mahound’s scribe rejects his boss’s truthfulness but records his words anyway as if they were God’s. In summary, The Satanic Verses implies the Koran is a fraud rather than a holy book.

The Satanic Verses caused an uproar in the Islamic world. Most notably, it caught the attention of Iranian Supreme Leader Ayatollah Ruhollah Khomeini.

In 1989, Khomeini issued a fatwa, a religious condemnation, against Rushdie. “I call on all valiant Muslims wherever they may be in the world to kill [Rushdie and the book’s editors and publishers] without delay, so that no one will dare insult the sacred beliefs of Muslims henceforth.” “Muslims wherever they may be in the world” took the ayatollah’s command seriously. In 1991, Ettore Capriolo, The Satanic Verses’ Italian translator, was attacked in Milan. That same year, Hitoshi Igarashi, the book’s Japanese translator, was murdered in Tokyo. In 1993, William Nygaard, the book’s Norwegian publisher, was shot. Rushdie himself had to live in hiding for years.

He has since tried to reestablish a normal life in New York City. But the latest events show that the Muslim world has not forgotten about Khomeini’s fatwa.

The New York Post interviewed Matar from the Chautauqua County Jail. Matar said he was inspired after seeing a tweet of Rushdie’s coming lecture. But he said he had high admiration for Khomeini. “I respect the ayatollah,” Matar said. “I think he’s a great person. That’s as far as I will say about that.” Matar was apparently warned by his lawyer not to answer any questions about if he attacked Rushdie because of the ayatollah’s fatwa.

Iran denies any involvement with Rushdie’s stabbing. However, vice World News cites anonymous intelligence officials on August 14 that Matar was in contact with Iran’s Islamic Revolutionary Guard Corps (irgc) prior to the stabbing. According to vice, “A nato counterterrorism official from a European country said the stabbing had all the hallmarks of a ‘guided’ attack, where an intelligence service talks a supporter into action, without direct support or involvement in the attack itself.” vice also cited a “Middle Eastern intelligence official,” claiming that Matar was in contact with “people either directly involved with or adjacent to the Quds Force,” the irgc’s external operations group.

Iranian Foreign Ministry spokesperson Nasser Kanaani blamed Rushdie himself for the stabbing. “In this attack, we do not consider anyone other than Salman Rushdie and his supporters worthy of blame and even condemnation,” he said. “By insulting the sacred matters of Islam and crossing the red lines of more than 1.5 billion Muslims and all followers of the divine religions, Salman Rushdie has exposed himself to the anger and rage of the people.”

Khomeini issued his fatwa in 1989. He died later that year. Over 30 years later, the Islamic world still answers to it. A 24-year-old Lebanese American tried to carry out the orders of a man from a foreign country who has been dead for decades. And a man had to spend years in hiding—and apparently still does—all for publishing a work of fiction.

The supreme leader of Iran, currently Ayatollah Ali Khamenei, is Iran’s head of state. But he is also a religious figure. When he speaks, millions of Muslims take him seriously. When he issues a decree, his followers don’t forget. Even if it means avenging a grudge 30-plus years later.

The supreme leader isn’t afraid to use this power and sway to cause international chaos. The attacks on people associated with The Satanic Verses in the 1990s show this. And Tehran isn’t apologetic if its followers step on other countries’ toes to get the job done. Even someone as far away from Iran as Japan could be targeted.

The Rushdie attack—and the irgc’s involvement in it—can be described a number of ways: zealous, petty, heartless. But perhaps the best word to use is pushy.

Rushdie is a very minor target. He and his followers pose no threat to the Iranian regime. Attacking him is a huge public relations hit for Iran. Yet the irgc wasn’t afraid to make the splash, and the Iranian government is still celebrating. Tehran isn’t afraid to rock the geopolitical boat for the most minor of issues. The Rushdie stabbing is like a declaration from Iran: “We don’t care how insignificant your insult is or how long it takes us. We will hunt you down, whatever it takes.”

The Trumpet bases its Iranian coverage on a prophecy in the book of Daniel: “And at the time of the end shall the king of the south push at him: and the king of the north shall come against him like a whirlwind, with chariots, and with horsemen, and with many ships; and he shall enter into the countries, and shall overflow and pass over. … He shall stretch forth his hand also upon the countries: and the land of Egypt shall not escape. But he shall have power over the treasures of gold and of silver, and over all the precious things of Egypt: and the Libyans and the Ethiopians shall be at his steps” (Daniel 11:40, 42-43).

This prophecy is dated to “the time of the end.” Other prophecies tie this in with the time we are living in now. And the Trumpet for years has identified the “king of the south” of this prophecy with Iran. Daniel reveals this country to be a world power. It commands a vast proxy empire in the Middle East and Africa. It is located to the south of “the king of the north,” which is Catholic Europe. (Please read History and Prophecy of the Middle East for more information.)

Strong’s Concordance defines the Hebrew word translated “push” as “to butt with the horns.” It’s translated elsewhere in the Bible as “gore.” Gesenius’ Hebrew-Chaldee Lexicon says it could also mean to “strike.”

In other words, this king of the south is provocative. It likes jabbing at its neighbors. Its jabs are especially sore, like an ox goring a man. This aptly describes the effects of Iran’s state-sponsored terrorist attacks.

“Since the early 1990s, we have believed and taught that Iran would lead the radical Islamist world and be the king of the south,” Trumpet editor in chief Gerald Flurry writes in The King of the South. “Today Iran is ‘king’ in the Middle East. … The fruits and evidence of the past two decades overwhelmingly prove where the king of state-sponsored terrorism is! The whole world can see that.”

Another thing to note about the prophecy: The king of the south isn’t even the main actor. That title belongs to the king of the north: Europe. And the rest of the prophecy shows that Europe will get fed up with Iran’s “pushes.” Actually, the king of the north will wipe Iran off the map. Daniel compares Europe’s attack as a “whirlwind.” “This isn’t a straight-on assault,” Mr. Flurry writes. “It is a storm that whirls around and around, invading the land and flooding into it!”

This war is prophesied to lead into “a time of trouble, such as never was since there was a nation even to that same time” (Daniel 12:1). It will impact the world. And it all starts with a “push”—a provocation—from Iran.

This is why the Trumpet watches what happens in Iran. But as scary as some of the prophecies are about this “time of trouble,” you don’t have to be worried about it. To those who look to Him, God promises protection—even in the midst of global chaos. To learn more, please request a free copy of The King of the South.