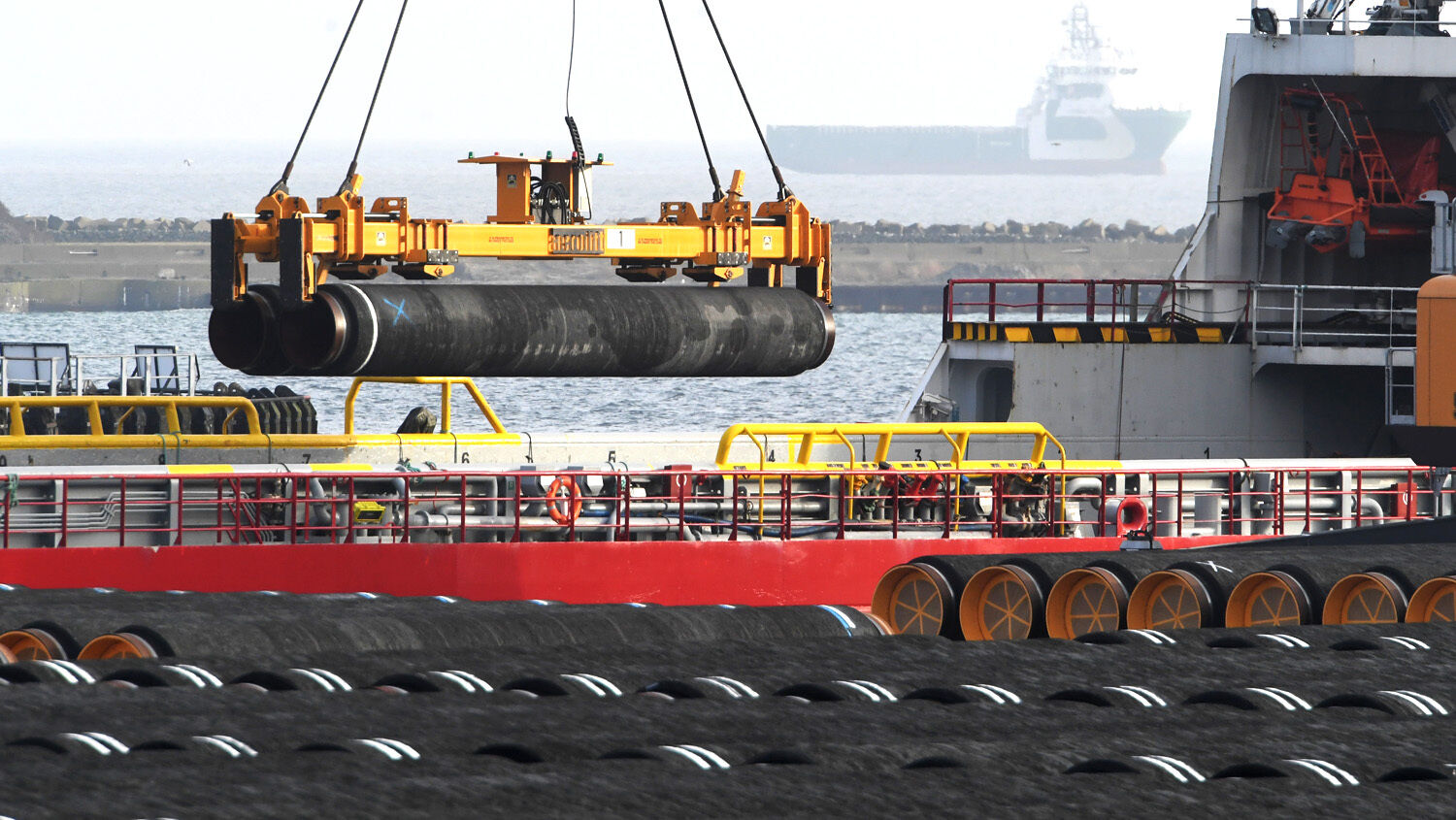 Tubes for the Nord Stream 2 pipeline are loaded onto a ship at the Mukran port in Sassnitz on the Baltic Sea island of Ruegen, northeastern Germany, on Dec. 12, 2019.
STEFAN SAUER/dpa/AFP via Getty Images

How Europe’s energy crisis destines Europe for worse to come

Since August 31, Russia has halted German gas supplies via the Nord Stream 1 pipeline. Initially, Russia claimed the “maintenance issues” could be resolved in three days. After nearly two weeks, it is clear maintenance isn’t the issue.

Over the summer, Germany hectically tried to fill up its gas storage facilities. But the abrupt stop of Nord Stream 1 has sparked fears that Germany’s supplies won’t last through the winter. As such, gas prices are soaring, and the European Union’s attempt to cap prices for consumers is failing. With inflation already raging, the energy crisis could lead to not only freezing homes in the winter but also the return of large-scale poverty in Europe.

The “most advanced continent on the planet, the birthplace of Western civilization, our civilization, is getting much poorer very quickly,” Tucker Carlson said on August 29. Following an extreme summer, Europe is expecting an extreme winter but lacks the energy to fuel homes. European sanctions on Russia have driven up the cost for fuel and enabled Russia to cut Europe’s gas supply. This reality has wide-ranging implications for our world.

“[W]e are living in one of those moments where so much is happening all at once and information about it all is so tightly controlled that huge history-changing events can occur and in fact are occurring right now and nobody seems aware of them,” Carlson said. Europe’s return to poverty is such an event.

French President Emmanuel Macron warned his citizens of the “end of abundance.” Germans are urged to endure major cuts in their personal lives. Small businesses and restaurants fear financial ruin when winter comes. Thousands are already calling for their governments to prevent the impending disaster. But European leaders have no such plans.

Mass protest against the German government’s sanctions against Russia which is causing an energy crisis in Germany. pic.twitter.com/Dy5Ork3IH5

European countries have reduced fossil fuel production to abide by a green energy agenda. This has made them increasingly reliant on Russia. When Russia invaded Ukraine, however, various European governments sanctioned Russian energy. “If energy is life and the lack of energy is death, then Europe’s dismantling of its energy security is equivalent to civilizational suicide,” the Rio Times wrote.

EU countries pledged to find alternatives to Russian natural gas. By March, the EU presented a plan to cut imports by two thirds; it also decided to sanction Russian oil and establish a complete ban by the end of the year (with a few exceptions). EU leadership knew full well the drastic consequences these decisions would have. European Commission President Ursula von der Leyen said in May: “[L]et’s be clear, it will not be easy because some member states are strongly dependent on Russian oil, but we simply have to do it. So today, we will propose to ban all Russian oil from Europe.”

The decision to exclude Russia from the global financial community brought similar results. At first, it meant Russia could do less with the money it received for its oil and gas. This, however, caused Russia to drastically reduce its gas exports to Europe. Gas prices then skyrocketed in Europe, which meant Russia is making more despite selling less gas.

European leaders are telling their citizens they have to pay the price to defend the liberal world order. But in reality, Europeans suffering from the crisis are indirectly helping Russia by paying more for their energy either through Russia directly or through China. ZeroHedge called it a “circuitous bypass of Russian sanctions by a hypocritical Europe.”

The results of these policies are disastrous. The war in Ukraine is ongoing and Russia’s economy is doing fine. Russia has an abundance of energy and food and is prepared for a cold winter, while Europe is not. The cost of energy has caused additional supply-chain troubles driving up the price of goods. Due to a lack of trust in the government, some European citizens are resorting to collecting firewood for the winter.

The crisis is threatening to tear up Europe. “We have a Ukraine crisis that has certainly not yet been resolved. We have … a looming recession. We have inflation. We cannot rule out the possibility that the looming worldwide food crisis with regards to Ukraine will again give rise to refugee flows,” former German Defense Minister Karl-Theodor zu Guttenberg warned on July 27. “All this with a probably resurgent pandemic will trigger a lot, but not reassurance in the population. The moment people see that gas prices are still up and that we might freeze this winter, the European Union will be put to a greater test than we can even imagine at the moment.”

When citizens can no longer pay their bills, when businesses collapse and the government runs out of handouts, the economy is doomed to fail and social unrest is certain.

Europe and the United States have sent billions to Ukraine—without ending Russia’s aggressions. They have spent billions to offset the burden sanctions have caused on its citizens—without bringing real relief. They have watched inflation rise while continuing to pursue economy-destroying policies in the name of fighting climate change. All this has not only caused the rise of poverty but also threatens a major banking crisis on top of it.

Our Western system that has led these self-destructive sanctions is based on an already corroded U.S. dollar. The fragility of this system is becoming increasingly evident. The collapse of this system is not only inevitable; it has been prophesied with major implications. The late Herbert W. Armstrong warned in 1984 that a massive banking crisis “could suddenly result in triggering European nations to unite as a new world power larger than either the Soviet Union or the U.S.” (co-worker letter; July 22, 1984).

Europe’s looming crisis is in many ways self-inflicted and could end as soon as it has started. But for this to happen it needs a different kind of leadership, and the Bible reveals that upcoming crises will lead to this exact outcome.

The Apostle John saw a world-ruling empire in a vision represented as a beast with 10 horns. “And the ten horns which thou sawest are ten kings, which have received no kingdom as yet; but receive power as kings one hour with the beast. These have one mind, and shall give their power and strength unto the beast. These shall make war with the Lamb, and the Lamb shall overcome them: for he is Lord of lords, and King of kings: and they that are with him are called, and chosen, and faithful” (Revelation 17:12-14).

These 10 kings will rise out of the currently fractured European Union to form a powerful empire under one overarching leader. Our free booklet Daniel Unlocks Revelation, by Trumpet editor in chief Gerald Flurry, shows how you can understand the above-mentioned prophecy by letting the Bible interpret itself. This booklet proves in detail that Europe is about to undergo a historic transformation that will lead to its rise to become the world’s dominant superpower. Analysts see Europe’s upcoming crisis, but they will be amazed by its resultant transformation.

The Bible may even give us more indications on how Europe will come out of this crisis and establish itself as a superpower. In his booklet Who or What Is the Prophetic Beast? Mr. Armstrong explained that Europe will reintroduce a six-day workweek and Sunday worship. Work-free Saturdays have only been a recent phenomenon. Six-day workweeks were not only common in centuries past—but Sunday worship was often enforced by European states. As Mr. Armstrong explained, the reference to the mark of the beast in Revelation 13 reveals that Sunday worship will again be enforced in Europe and anywhere it exerts influence.

It is easy to see how Europe’s poverty could lead to the end of the five-day workweek. A push for Sunday worship is also underway.

The Catholic Church has often emphasized that European laws need to ensure that Sunday remains a day of rest. As crises culminate and more and more people need to work more hours this plea will get stronger and stronger to the point that Sunday worship will again become a universal law rather than an option. European leaders will likely embrace this push, claiming it will solve their financial woes and allow them to set up a an independent economic powerhouse.

People have scoffed at Europe reintroducing Sunday worship. They have also scoffed at the possibility of the dollar’s imminent collapse. But with the rising economic turmoil, both scenarios are becoming more and more likely, which is why you need to learn about these prophecies. If you haven’t already, I encourage you to request a free copy of Who or What Is the Prophetic Beast?