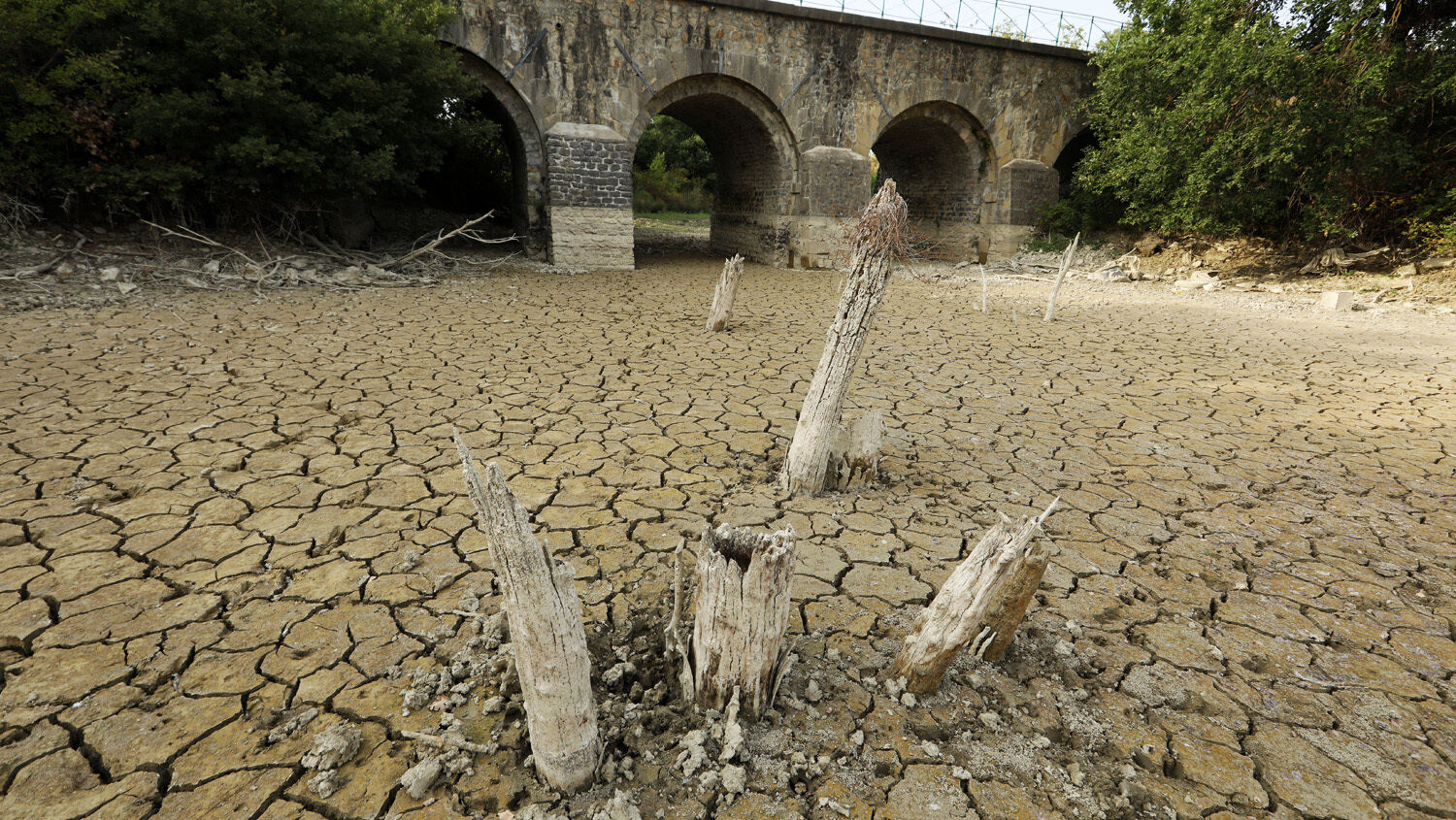 The drought has transformed the Gardon River into a Saharan reg, as seen on August 13 in Anduze, France.
Patrick Aventurier/Getty Images

There is a message in these curses that Germany should heed.

Europe is experiencing what may prove to be its worst drought in 500 years, according to the August report of the European Commission’s Joint Research Center (jrc). History warns of the tragic story of past famines. Though modern conveniences reduce the fear of starvation, the warnings of the past should not be ignored.

Since the beginning of the year, Europe has been experiencing severe drought that has dried up fields and exposed riverbeds. The European Commission’s Global Drought Observer noted that 47 percent of the Continent is under drought warning, which means low precipitation and dry soil; 17 percent of the Continent is under drought alert, which means vegetation is showing signs of distress. The jrc August 2022 Bulletin noted that the lack of rain coupled with days of severe heat had dramatic effects on the summer crops. Dried up rivers have harmed not only farmers but also “the energy sector and … hydropower generation and cooling systems of other power plants, as well as river transport” (ibid).

“Europe’s hot, dry summer means that the water level on the Rhine, Western Europe’s most important waterway, is at a record low, making it too shallow for many ships to pass—a problem for a country that depends on the river for 80 percent of its water freight,” npr reported on August 17. “Millions of tons of commodities are moved through the Rhine, and shipping disruptions are certain to further impact Germany’s economy, already reeling from global supply chain disruptions and record high energy costs stemming from Russia’s invasion of Ukraine.”

This is likely to lead to an economic downturn, contribute to more inflation, and worsen Europe’s energy crisis. “This is particularly problematic now, as Germany attempts to wean itself off Russian gas and needs coal plants as a backup,” noted Guido Baldi, a researcher with the German Institute for Economic Research. “If the transport of coal is hindered, we’ll see electricity shortages starting in September.”

Last year, Germany experienced record floods that killed more than 150 people. This year the same area is experiencing record droughts. Robert Egeling of the nabu Center Rheinauen in Bingen told Tagesshau that extremely low water levels in the Rhine occurred on average only every 50 years. But following the droughts of 2003 and 2018, Germany is now experiencing them for the third time in less than 20 years. What makes the crisis even worse is, this year’s drought dried up the Rhine weeks earlier than in other droughts. Europe is just now entering its typically driest season; so the situation could get a lot worse.

In the Donau River in Serbia, dozens of Nazi warships have reemerged. They are a reminder of the cruelty Germans committed against the Serbian people and show how the nations have suffered from it to this day. Author Velimir Trajilovic told Der Spiegel: “The Germans have left behind a great ecological disaster that threatens us …” (Trumpet translation throughout).

The dry conditions are also resurfacing what some see as bad omens of the past. “As rivers run dry in central Europe, they reveal a type of low-water mark particular to that part of the world, the so-called Hungersteine, or ‘hunger stones,’” Big Think explained. “These rocks are only visible when water levels are extremely low. Over centuries, they have been interpreted as warning signs of imminent crop failures and even famine, and they were inscribed with dates or sayings marking the event.”

One of the more prominent hunger stones was found in Germany’s Elbe River. It reads, “Wenn Du mich siehst dann weine,” or “When you see me, weep.” This stone is meant to be a warning that if such low water level is reached, future generations ought to be prepared to endure another devastating famine.

Our carefree world is being confronted with a cold reality. Ukraine used to be the seventh-largest wheat producer worldwide, but Russia’s attack on the country has greatly limited its ability to harvest and export its crop. Russia is the world’s largest gas exporter and has reduced its exports to Europe drastically. Thus, the fear of freezing and starving in the coming winter are more real than ever for our present generation. On top of all that, inflation has eaten up the savings of many citizens, and the government has run out of ways to help. This means the impoverished will be the first to suffer in the upcoming months.

A God-believing citizen may wonder why God allows severe weather curses to hit Europe at what seems to be the worst possible time. The Bible, however, reveals that God not only allows weather disaster but He specifically uses them to warn our world.

Nahum 1:3-4 read: “The Lord is slow to anger, and great in power, and will not at all acquit the wicked: the Lord hath his way in the whirlwind and in the storm, and the clouds are the dust of his feet. He rebuketh the sea, and maketh it dry, and drieth up all the rivers: Bashan languisheth, and Carmel, and the flower of Lebanon languisheth.”

God inflicts the wicked with hurricanes and tornadoes. He sends storms, which bring flooding and destruction. … Bashan was one of the most fertile areas with rich pastures, located east of Jordan. Carmel had gardens, vineyards and lush wooded areas. Lebanon was filled with giant cedar and cypress forests. God dried up the rivers and sent a drought that withered all these regions! God will devastate Germany the same way.

God wants this world to learn that He controls nature. Many natural disasters are anything but natural. Soon, arrogant men will learn this lesson very deeply. “The mountains quake at him, and the hills melt, and the earth is burned at his presence, yea, the world, and all that dwell therein” (verse 5). Mountains quake, hills melt and the earth is burned by God. God will shake the pillars of the Earth in Germany. Then He will send an army that acts like a ravenous, raging bear.

This whole world will soon learn about the terrifying wrath of God! “Who can stand before his indignation? and who can abide in the fierceness of his anger? his fury is poured out like fire, and the rocks are thrown down by him” (verse 6). Nobody can stand before such fierce anger and indignation! The Hebrew expression for before is “in the face of.” Even the rocks crumble before God’s fury and fire!

Historically, people considered severe weather disasters a reason to repent from their ways and seek God. But in our day, people are blinded by a deceiving, unscientific climate change agenda. (For more information, read “The Deadly Climate Change Deception” and request a free copy of Why ‘Natural’ Disasters?)

A Prophetic Warning for the Future

As Mr. Flurry explains, the book of Nahum is directed at Germany today—modern Assyria. God has dried Germany’s rivers—like this prophecy foretold. But this is just a precursor for much worse to come.

Our world is plagued by wars, greed and immoralities that the Bible condemns. Unless our nations heed God’s very own message and repent, God’s curses will grow exceedingly severe. Bible prophecy, however, indicates that the German people will not heed God’s message. They will instead, turn to a savior of their own. This man will use Germany’s and Europe’s severe situation to cause them to follow him into a destructive war. It has happened in the past and the Bible reveals it will happen again. The book of Nahum calls this man a wicked counselor.

Soon, Germany will be ruled by a man more cunning and deceitful than Adolf Hitler. …. This wicked counselor literally means “a counselor of Belial.” Paul contrasts Belial with Christ (2 Corinthians 6:15). This being personifies all evil and is obviously motivated by Satan.

America, Britain and the Jewish nation of Israel almost grovel before Germany today. Britain tried that approach before World War ii with Hitler. That approach will bring about our destruction! Instead of listening to God, they will try to deal with this vile leader who devises evil against God! Satan will inspire this man to send a flood—probably an army—after God’s own people as they are taken to a place of safety (Revelation 12:14-16).

We must not forget that Satan is worshiped by Germany and the “Holy” Roman Empire (Revelation 13 and 17). This German leader will be working directly for Satan!

This is a strong warning. You can prove its accuracy by closely studying Bible prophecy and secular history. I encourage you to request a free copy of Nahum—An End-Time Prophecy for Germany to understand the full context of these prophecies and how they will ultimately lead to the most wonderful news our world could ever hear.

After this prophesied strongman has led Germany to commit great atrocities, God will punish Germany for fighting against Him. “Behold, I am against thee, saith the Lord of hosts, and I will burn her chariots in the smoke, and the sword shall devour thy young lions: and I will cut off thy prey from the earth, and the voice of thy messengers shall no more be heard” (Nahum 2:13).

Mr. Flurry explains: “God says, ‘I am against [you]’! God is going to speak the only language the German military understands—superior force. The German military has had continual prey. Throughout history, it has been endless—that is, until God smashes it forever.”

If Germany refuses to heed this warning today, it will suffer great devastation. Today’s weather curses are a warning to Germany today and our whole world of the evil that is about to come. God’s Word cannot be broken, but He gives everyone a chance to repent—if they choose to heed His warning!