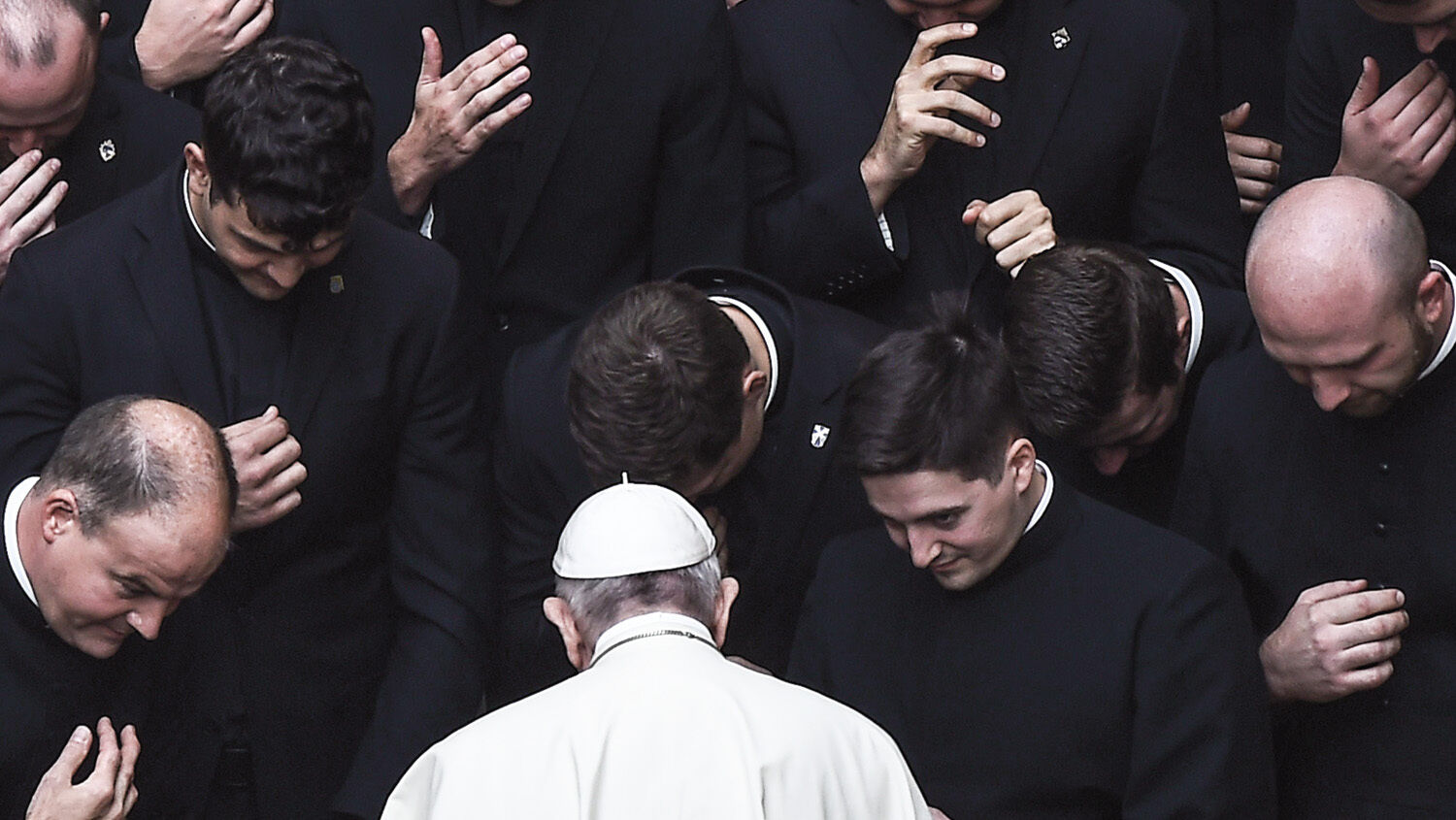 Pope Benedict xvi shocked the world when he became the first pope to resign since the Middle Ages. After his butler leaked confidential documents to the press, exposing power struggles and infighting in the Vatican, Benedict said he was too weak to implement the necessary reforms of Vatican leadership. Cardinals then elected Pope Francis with a mandate to reform the Vatican.

The Roman Catholic Church’s influence spans the globe, but it has not been a geopolitical superpower since the breakup of the Holy Roman Empire. Many Catholics hope Francis’s reforms will change that.

Upon his election, Cardinal Jorge Mario Bergoglio chose the name Francis to send a signal that he intended to unite the Catholic Church. Cardinal Bergoglio was a Jesuit, and St. Francis of Assisi was the founder of the Franciscan, a religious order often seen as the Jesuits’ rivals. So a Jesuit pope who chooses the name Francis seeks to unify Jesuits, Franciscans and all other Catholic orders under his personal authority.

Toward this end, Francis appointed a panel of cardinals to advise him on the best way to reorganize the Roman Curia. The Curia is the administration that governs the Catholic Church and Vatican City, which is its own sovereign country. The pope and the cardinals published their constitution, titled Praedicate Evangelium, on March 19, and it went into force on June 5. The official English translation, Preach the Gospel, was not published until June 29. It reveals the most radical shakeup of the Curia in a generation.

Most of the news coverage about the Vatican’s constitutional reforms revolves around the pope’s decision to allow lay Catholics (including women) to lead curial departments and around his decision to incorporate a clergy abuse commission into church government. But these are not the most significant reforms. The most significant change is the restructure of all Curia activities under one simple mission: support the pope in his crusade to convert all nations to Roman Catholicism.

This is more than just organizational reform. This will cause major political and moral repercussions worldwide. The Bible prophesies that Protestants around the world will gravitate toward reuniting with the Roman Catholic Church. The new constitution is designed to accelerate this process.

To unify feuding factions, Francis gave them a mission before delving into the details of church organization. The preamble of his constitution says, “[Preaching the gospel] is the task that the Lord Jesus entrusted to His disciples. This mandate constitutes ‘the primary service that the church can render to every individual and to all humanity in the modern world.’ To this end, she has been called to proclaim the gospel of the Son of God, Christ the Lord, and thereby to awaken in all peoples the hearing of faith.”

With this mission established, the rest of the document is a blueprint for the church. “The Roman Curia is at the service of the pope, who, as the successor of Peter, is the perpetual and visible source and foundation of the unity both of the bishops and of the whole company of the faithful,” it states. “The Roman Curia is not set between the pope and the bishops, but is at the service of both ….”

In the centuries since Pope Paul iii established the Congregation for the Doctrine of the Faith in 1542, an idea has arisen that the pope leads the Curia, and the Curia leads the church. The new constitution reestablishes the teaching that each diocese is led by a bishop, and the bishop reports to the pope. It establishes that the curia does not lead the church; it only exists to assist the pope and the bishops with certain tasks. Francis’s decision to let lay Catholics lead curial departments is meant to emphasize that the Curia does not wield spiritual authority like the pope and the bishops.

After emphasizing that the pope is the head of the church, the constitution establishes a secretary of state to oversee the governance of Vatican City. It also gives a top spot to a new Dicastery for Evangelization. The dicastery merges the Congregation for the Evangelization of Peoples, which coordinates missionary activities, with the Pontifical Council for the Promotion of New Evangelization, which is dedicated to reversing secularization in Western countries. The Dicastery for Evangelization supersedes all other departments, including the Congregation for the Doctrine of the Faith, which is responsible for doctrine.

Some ultra-traditionalist Catholics fear that prioritizing evangelization will liberalize the church. Francis countered that all his decisions follow precedents set at the Second Vatican Council. In comments published on June 14, Francis told Jesuit editors, “Restorationism has come to gag the [Second Vatican Council],” before adding that he knew priests (particularly in the United States) who viewed the 16th-century Council of Trent as more important than the 20th-century Second Vatican Council.

For the past 500 years, the Vatican has been run by bureaucrats intent on defending Catholic dogma from Protestantism and secularism at all costs. But during the early Middle Ages the power structure was different. The sixth-century Pope Gregory the Great wrote a letter advising Augustine of Canterbury to compromise with pagan beliefs to bring Anglo-Saxon tribes into the Catholic Church. The Catholic Church grew due to an “evangelization” that merged pagan practices with Christian doctrine.

Before John Paul ii was elected, the late Herbert W. Armstrong described the heated power struggles between liberal and conservative cardinals within the Catholic Church in an article titled “Where Are We Now in the Panorama of Prophesied World Events?” He predicted a conservative pope would save the church by suggesting that the Vatican lead in uniting the nations of Europe. But he also predicted that even such a strong pope may have to slightly change Catholic doctrine for the sake of reigning over a church extensive and united enough to wield major political power.

Francis may not be the last pope; he has said he may resign if he becomes too frail. But the constitution he has implemented will empower any future pope to rule the church with authoritarian power, without excessive interference from cardinals in the Curia who have other ideas.

Some may take offense at the idea that Catholicism has been influenced by paganism, but practically any encyclopedia will confirm this assertion.

Mr. Armstrong understood Catholicism’s pagan history. “Where did Sunday observance originate?” he wrote in Who or What Is the Prophetic Beast? “Not with the church, but with the pagan religion of the Roman Empire! It is the day on which the ancient pagans assembled at sunrise, faced the east (as they do Easter Sunday morning today), and worshiped the rising sun. It was Constantine, emperor of the Roman Empire, not a pope, who made Sunday the official so-called Christian day of rest. But it was enforced—people were caused to accept it universally—by the church!”

Constantine was a worshiper of the Syrian sun god Sol Invictus before he converted to Catholicism. It made sense for him to promote Christian worship on Sol’s Day instead of on the Jewish Sabbath.

After explaining the origins of Sunday worship, Mr. Armstrong explained that the Catholic Church adopted the government structure used by the Roman Empire. “Where, then, did human church government derive its present form?” he asked. “‘The first pope, in the real sense of the word, was Leo i (a.d. 440–461),’ says the Cyclopedia of Biblical, Theological and Ecclesiastical Literature, Vol. 7, page 629. To him the form of government of the Roman Empire was the most marvelous thing on Earth. He applied its principles to the church, organized the church into a government, forming the papacy.”

The provinces of the Roman Empire were called dioceses long before Catholic bishoprics were. The chief high priest of the pagan Roman College of Pontiffs was styled Pontifex Maximus for 2,600 years before Pope Francis adopted @Pontifex for his Twitter handle. It is easy to see that the Vatican’s new constitution is just a codified version of the unwritten governance of Constantine’s empire. It is quite different from the true Church described in the Bible.

The gospel Pope Francis wants his bishops to evangelize people with is also a counterfeit gospel. In his book The Incredible Human Potential, Mr. Armstrong explained that Jesus Christ preached a gospel about the coming Kingdom of God, while Simon the sorcerer preached a substitute “gospel” about the person of Christ—proclaiming the Messenger but suppressing the message (Acts 8:9-24).

Catholics today believe Simon was a heretic for the various gnostic doctrines he preached. Yet unknowingly, they have fallen prey to his basic error—proclaiming the Messenger but suppressing His message—and other pagan beliefs (like Sunday worship and the belief in a trinity) prevalent in his day.

The Bible uses a woman to symbolize a church (e.g. 2 Corinthians 11:2; Ephesians 5:22-27; Revelation 19:7). And Isaiah 47 describes a woman called “daughter of Babylon,” “daughter of the Chaldeans” and “lady of kingdoms.” This woman says, “I shall not sit as a widow, neither shall I know the loss of children” (verse 8).

The Chaldeans of the Neo-Babylonian Empire emigrated to Italy during and after the reign of Julius Caesar. New Testament Survey author Merrill C. Tenney described the Babylonian mystery religions that became prevalent in Rome as Chaldean immigrants poured into Italy. Many of the doctrines of these Eastern mystery religions were adopted by the early Christian church; therefore, Catholicism is the “daughter of Babylon” and the “Mystery, Babylon the Great,” which the Prophet Isaiah and the Apostle John spoke against.

When this “lady of kingdoms” says, “neither shall I know the loss of children,” she means she will not allow the Protestant denominations that rebelled against her authority to remain independent.

The pope’s new constitution is an attempt to recover Catholic authority over those churches. While it is unlikely the Vatican will make any sweeping doctrinal changes, the church may make strategic compromises—standing firm in one area while compromising in another—to draw converts and to attract entire churches, such as it has with the Anglican Church. But when the Vatican garners enough power to enforce its dictates, all people under Rome’s authority will be forced to adopt Sunday worship.

Only God can deliver His people from this “lady of kingdoms,” but they must first turn to Him in repentance.