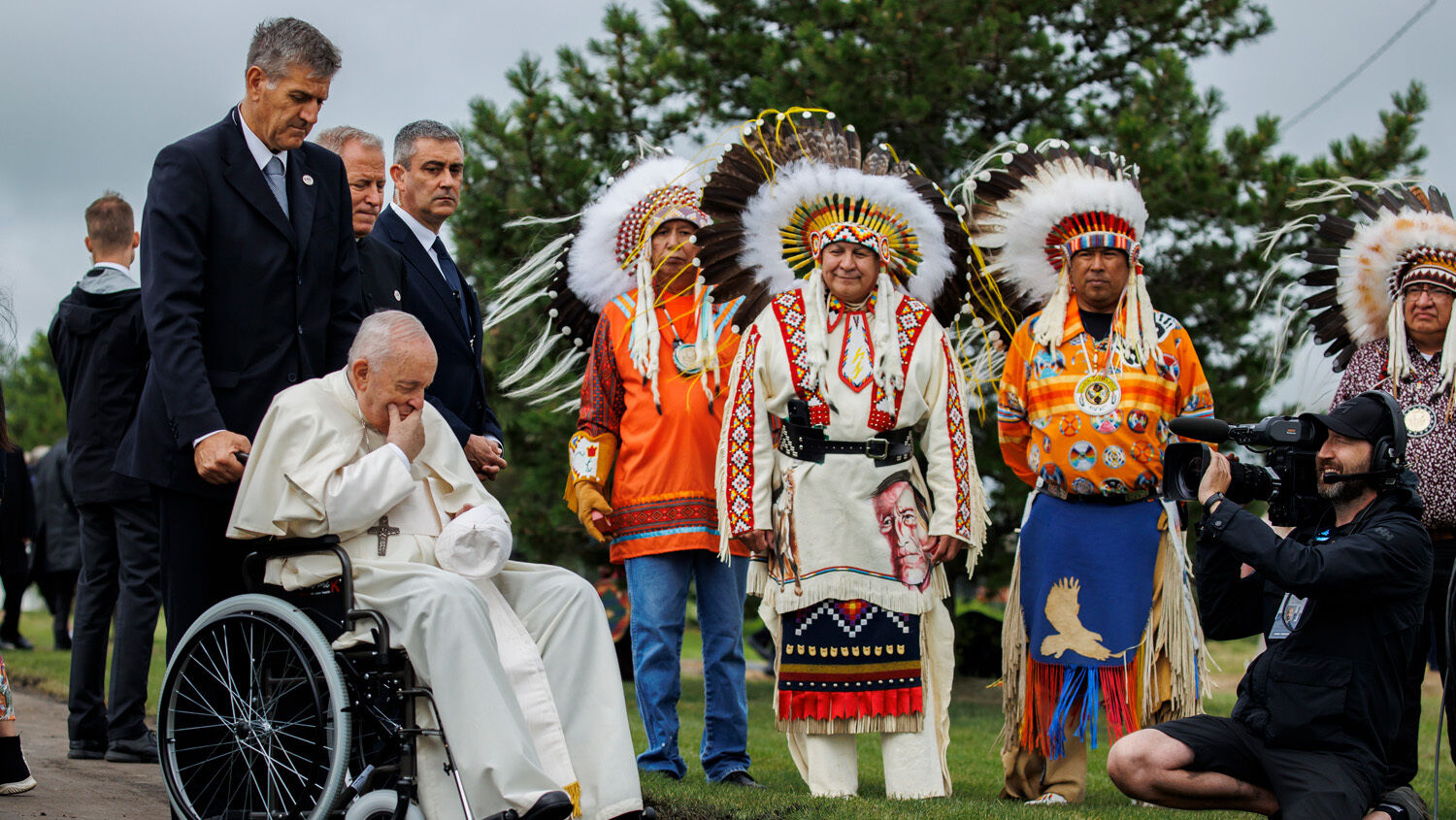 Pope Francis visits the site of the former Ermineskin Residential School, alongside the Maskwacis chiefs, during his July 25 visit.. The pope is touring Canada, meeting with indigenous communities and community leaders in an effort to reconcile the harmful legacy of the church’s role in Canada’s residential schools.
Cole Burston/Getty Images

The Vatican issues an apology—sort of.

In his first visit to the country, Pope Francis toured Canada from July 24 to 29. Francis’s main purpose for visiting was to address the growing publicity of Canada’s residential school scandal. Part of his visit was the giving of an official papal apology in the town of Maskwacis, Alberta. This is the nation’s first papal visit in 20 years.

Residential schools were government-sponsored, mostly church-run schools established throughout Canada. They were intended to help support the assimilation of indigenous (Indian) peoples into Canadian society. Assisting the integration of more underdeveloped cultures may sound innocuous, but residential schools were often places of horrific abuses. Indigenous children were often forcibly removed from their families to attend the schools. Physical and sexual abuse were rampant—even torture. One school in northern Ontario punished students with a homemade electric chair. Typically located in remote areas, far from prying eyes, the clergy-run schools could often do what they wanted, sometimes even against the wishes of suspicious Indian Affairs agents.

The residential schools were operated by Anglican, Presbyterian and United churches, as well as the Roman Catholic Church, which operated roughly 60 percent of schools. Hence Ottawa’s Truth and Reconciliation Commission’s “call to action”:

We call upon the pope to issue an apology to survivors, their families and communities for the Roman Catholic Church’s role in the spiritual, cultural, emotional, physical and sexual abuse of First Nations, Inuit and Métis children in Catholic-run residential schools. We call for that apology to be similar to the 2010 apology issued to Irish victims of abuse and to occur within one year of the issuing of this Report and to be delivered by the pope in Canada.

The schools’ legacy gained scrutiny after the announcement of the discovery of 215 alleged unmarked graves at a residential school in British Columbia. The discovery is “alleged” because it used images collected through the use of ground-penetrating radar as its primary evidence. Not a single grave has yet to be confirmed.

Much of the recent hysteria about the schools is manipulated for political reasons. But there’s no denying horrific abuses occurred in the school system. There’s also no denying the Vatican needs to come clean about its legacy in the system. In 2008, Canadian Prime Minister Stephen Harper apologized on behalf of the government. Every other church denomination involved apologized for its role years ago. The Catholic Church was the only organization that hadn’t.

The pressure must have become too much for the Vatican to ignore. In April, the pope received an Indigenous delegation in Vatican City.

Here are some excerpts from the pope’s Maskwacis speech:

I am here because the first step of my penitential pilgrimage among you is that of again asking forgiveness, of telling you once more that I am deeply sorry. Sorry for the ways in which, regrettably, many Christians supported the colonizing mentality of the powers that oppressed the indigenous peoples. I am sorry. I ask forgiveness, in particular, for the ways in which many members of the church and of religious communities cooperated, not least through their indifference, in projects of cultural destruction and forced assimilation promoted by the governments of that time, which culminated in the system of residential schools. …

What our Christian faith tells us is that this was a disastrous error, incompatible with the gospel of Jesus Christ. It is painful to think of how the firm soil of values, language and culture that made up the authentic identity of your peoples was eroded, and that you have continued to pay the price of this. In the face of this deplorable evil, the church kneels before God and implores His forgiveness for the sins of her children.

I myself wish to reaffirm this, with shame and unambiguously. I humbly beg forgiveness for the evil committed by so many Christians against the Indigenous peoples.

There are several things to note about Francis’s speech. Several times he appeared to shift the blame as much as he could. Usually, he referred to “Christians” as the perpetrators of crimes. The Catholic Church operated the majority of the schools, yet Francis seemed to minimize the leading role the Catholic Church played. He only mentioned “Catholics” once in his speech, saying, “I will continue to encourage the efforts of all Catholics to support the indigenous peoples.”

His statement that “many Christians supported the colonizing mentality of the powers that oppressed the indigenous peoples” is a veiled jab at the British Empire. The implication is that the Catholic Church didn’t commit the crimes itself. Rather, it aided and abetted the real criminals (“the colonizing powers”). Francis asked for “forgiveness … for the ways in which many members of the church and of religious communities cooperated, not least through their indifference, in projects of cultural destruction and forced assimilation promoted by the governments of that time.”

Nobody suggests the Catholic Church is alone responsible. But there is a big difference between “cooperating through indifference” and actively abusing and torturing children.

Pope Francis didn’t mention the money the Catholic Church promised residential school survivors in a 2006 settlement. The church announced a ca$30 million (us$23.5 million in 2006 values) gift to residential schools, their families and their communities. The church ended up giving less than ca$4 million, citing fundraising problems. But it didn’t have any problems spending ca$128 million to renovate the cathedral in Toronto, Ontario, completed in 2016.

The church also refuses to submit its residential school records to the National Center for Truth and Reconciliation.

The Canadian government wasn’t impressed with the pope’s apology. Minister of Crown-Indigenous Relations Marc Miller said in an interview there were “gaps” in the apology. He singled out Francis’s omissions about sexual abuse and the Roman Catholic Church’s blame as an organization. Miller compared Francis’s apology with Pope Benedict xvi’s 2010 apology for the Catholic Church’s role in Irish schools, where similar atrocities were committed. Benedict addressed both concerns in his letter. “That is a clear distinction in the two,” said Miller. “The discrepancies speak for themselves.”

This isn’t the only scandal to embroil the Vatican. In 2020, the Catholic Church’s German branch admitted the church’s complicity with Adolf Hitler’s Nazi regime. There is the ever unfolding story of the Vatican pedophilia scandals. And there is the pope’s relationship with Russian President Vladimir Putin amid the ongoing Ukraine crisis.

Yet somehow, the Catholic Church keeps weathering its crises. No matter how bad the scandal, Roman Catholicism is still the world’s largest religion. The papacy is still among the most respected institutions in the world. Regardless of its scandals, the Vatican remains powerful and popular.

There is a strange dichotomy with the Vatican. It’s a dichotomy that many see but few understand. And there are many more who don’t even notice it.

The Roman Catholic Church is the most recognizable and illustrious religion on Earth. Worldwide, it has more than 1.2 billion followers, roughly 400,000 priests and some 221,000 parishes. Catholicism has a presence on every continent and in every nation. Tens of millions of Catholics dutifully attend services each week. Around the world, Catholic priests and authorities are invited to contribute to conversations, public and private, on religion, politics, culture, morality and virtually every other subject.

More than 5 million tourists flock to Vatican City annually. They visit to admire Michelangelo’s legendary frescoes, to attend mass in the Sistine Chapel, and in the hope of catching a glimpse of the most venerated figure on the planet: the pope.

Yet despite its global ubiquity, colossal fame, material splendor and long history, the Catholic Church is an enigma. Even to lifelong Catholics.

The Catholic Church claims to be God’s “light to the world” on Earth. It supports hospitals, orphanages, schools and other caregiving institutions around the world. The Vatican Museums portray it as the guardian of Western culture and civilization. Yet behind its cultured, caring veneer is an institution guilty of some of humanity’s worst atrocities, such as the Crusades and the Inquisition. As Macdonald writes, the Catholic Church is an enigma. It can look like a lamb while behaving as a dragon.

There’s more to the story than meets the eye. This isn’t merely a story about a flawed but well-meaning institution trying to come to grips with a hard past. The roots of the Vatican’s current path lie deep in its history. By understanding its history, you can learn where the Vatican is headed—even in the near future.