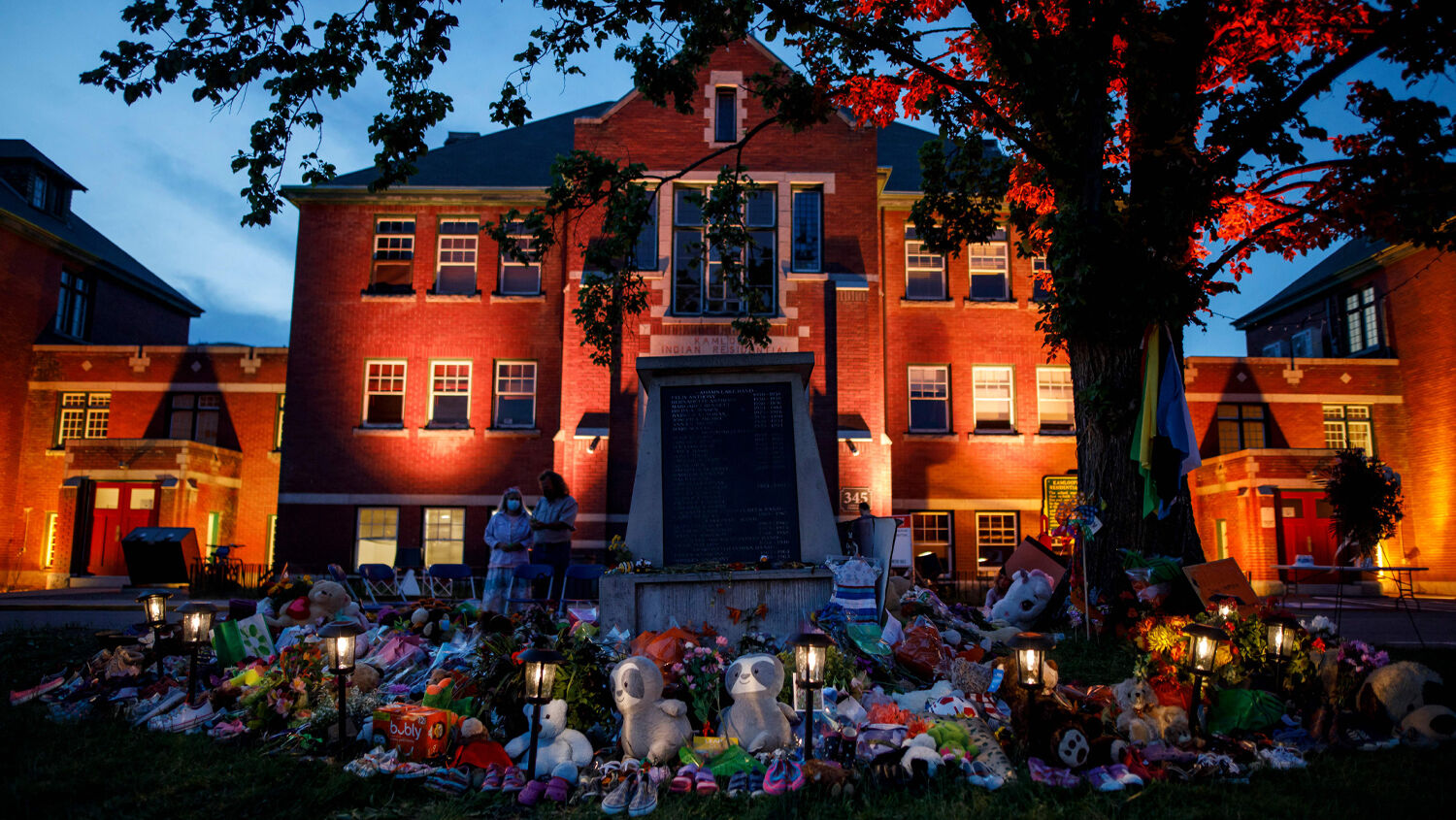 A makeshift memorial for the 215 children whose remains have been discovered buried near the former Kamloops Indian Residential School in Kamloops, British Columbia, Canada.
COLE BURSTON/AFP via Getty Images

The tragic history is being hijacked by radical forces.

Canada is guilty of genocide. That is what the media declared after the discovery of 215 unmarked graves on the grounds of the former Kamloops Residential School in May. Retired anthropology professor Hymie Rubenstein wrote: “The Kamloops discovery became Canada’s George Floyd moment.”

Since that time, nearly 1,000 other unmarked graves have been identified at the former grounds of residential schools. Indigenous leaders have called residential schools “concentration camps,” the “holocaust” and “crimes against humanity.” Around 56 Catholic churches have been burned to the ground, with some liberal leaders agreeing with the actions. Rioting, statue defamation and calls to rename “colonial” streets and provinces followed in the announcement’s wake.

Now there is a powerful movement to fundamentally change Canadian law and society in order to fix the systemic racism inherent in the country.

The history and facts about residential schools are being hijacked.

The Tragedy of Residential Schools

The Canadian residential school system was a tragedy. Over 3,200 children are reported as dying while attending the schools, and some 10,000 children are reported missing. Due to poor record-keeping, the cause of death is unknown for about half the children. Of those we do know, a majority of the children died from diseases such as tuberculosis, influenza and pneumonia. This was partially due to a lack of resources and poor living conditions. Overall, the child mortality rate was higher in the residential schools than in general society. The schools were government funded and administered by Christian churches.

Sixty percent of the schools were administered by the Catholic Church. The Guardian reported, “Disease and hunger were rife at the schools, and survivors have described physical and sexual abuse, often at the hands of priests and Catholic laypeople.” This included whippings and even torture. The Royal Canadian Mounted Police investigated 150 allegations of physical abuse and 86 allegations of sexual abuse at the Joseph Bernier School in Nunavut, which included groping male and female children, sexual exhibition and intimidation. Perhaps the most notorious was the case of Bishop Hubert O’Connor, who was charged with two counts of rape and indecently assaulting two employees in the 1960s.

This is only the tip of the iceberg of shocking abuses revealed in the National Truth and Reconciliation Commission report. The Canadian government spent $72 million on the commission between 2007 and 2015 to investigate the residential schools and create 94 action steps to reconcile Canada with the indigenous community. In 2008, the Canadian government officially apologized and gave $3 billion in reparations.

The Catholic Church was obligated to pay $29 million in reparations, but to date has only paid $3.7 million citing “poor fundraising.” In that same period of time, however, the church raised $300 million for building projects. A Globe and Mail investigative report found that the Canadian Catholic Church had net assets of $4 billion in 2019. Both Pope Benedict xvi and Pope Francis have not apologized for the suffering of indigenous children at the residential schools.

The Truth and Reconciliation Commission has a 273-page volume on “Missing Children and Unmarked Burials.” These unmarked graves are not “discoveries” because we already knew they were there. Rubenstein wrote in the C2C Journal that these cemeteries and unmarked graves are well known at the local level.

The band chief in the Kamloops area said the graves were “a knowing in our community that we were able to verify.” The indigenous leaders in Kootenay, where 182 graves were discovered, were also aware of the unmarked graves. Rubenstein wrote:

In response to media alarm about the event, Sophie Pierre, the former chief of the St. Mary’s Band, noted … “There’s no discovery, we knew it was there, it’s a graveyard. The fact there are graves inside a graveyard shouldn’t be a surprise to anyone.”

Chief Joe Pierre commented, “Graves were traditionally marked with wooden crosses and this practice continues to this day in many indigenous communities across Canada.” Over time, these crosses deteriorate and the graves become unmarked. In response to the media after 751 unmarked graves were found on the grounds of the Marieval Residential School in Saskatchewan, Cowessess band member Irene Andreas wrote in a local newspaper: “There is no ‘discovery’ of graves. All your elders have knowledge of every grave. … The Band office received a list of over 750 registered burials from the Bishop’s office.”

The ground-penetrating radar being used cannot identify the contents of the grave or any organic matter. It can merely indicate that a grave shaft has been dug into the earth. It is a massive assumption to say all the graves belong to indigenous children. Some non-indigenous families have come forward in Saskatchewan and said their family members are buried in the Marieval cemetery. It will take a lot of time to discover the contents of the graves.

These graves are not discoveries or indications of genocide. The facts show that residential schools were a failed government initiative with horrendous consequences. However, the media and radical leaders are warping the truth to frame Canada as a fundamentally racist society.

Not Everyone Is Equal in Canada

Regional Chief Kluane Adamek wrote an opinion piece in the Globe and Mail calling for the Canadian Senate to become “indigenized.” “Transforming the Senate to truly reflect and include a majority indigenous representation would be a significant gesture toward reconciliation,” Adamek said. “It would have natural legitimacy as a custodial body safeguarding the land and all peoples.”

The Canadian Senate is the body responsible for scrutinizing laws passed by Parliament. Senators are appointed by the prime minister and serve until age 75. They have a great deal of power in framing laws.

“Ultimately, reconciliation will mean ceding and sharing power,” said Adamek. Reconciliation isn’t about forgiveness; it is about amassing power.

To appoint individuals to positions of power based on their race goes against the very heart of democracy. In reality, the Canadian Constitution is framed in such a way that indigenous peoples are more legally privileged than any other people in Canada.

Bruce Pardy writes in C2C that in addition to the rights all Canadians have in the Constitution, there is a separate section called Aboriginal Law, Section 35, which grants additional treaty rights, tax exemptions, entitled procedures in criminal sentencing, and certain positions in institutions reserved only for indigenous people. The Supreme Court has ruled that the Canadian government must consult the indigenous peoples on governmental policies that might conflict with Section 35.

The National Truth and Reconciliation Commissions’s 94 recommendations are treated as law by scholars and elites, even though they have never been legislated into law. Included in the recommendations is calling for the government to enforce the UN’s Declaration on the Rights of Indigenous Peoples, which asserts that indigenous peoples own all the land and resources in Canada. It also states they have the right to self-government and distinct institutions, and that the Canadian government needs to pay for it all. It single-handedly upends the entire fabric of Canada as a nation.

This declaration is being adopted into federal Canadian law and has been accepted provincially in British Columbia, even though the document was drafted by foreign bureaucrats. The committee that created the UN declaration includes leaders from Cuba, China and Russia.

Following the media coverage of the unmarked graves, Mary Simon was appointed as the first indigenous governor general of Canada, representing Queen Elizabeth ii. In her first speech, Simon said Parliament was on “unceded territory” from the Algonquin peoples, with Trudeau echoing her comments.

Canada has done much to atone for mistakes of its past. However, “reconciliation” has become a movement of coercion to change laws and society by government bureaucrats.

The radical leftists in Canada have hijacked the history of the residential schools to promote their own agenda. By framing Canada as a racist nation, guilty of genocide, they claim a fake moral mandate to upend society and destroy Canadian heritage.

What is Canada’s heritage? It is actually part of the biblical nations of Israel. Herbert W. Armstrong explained in The United States and Britain in Prophecy that the British Commonwealth descended from the tribe of Ephraim—that includes Canada. All the blessings enjoyed in Canada are part of the fulfillment of biblical promises that God made to Israel.

This movement to destroy the institutions and heritage of Canada is actually an attack on God and the Bible. Trumpet editor in chief Gerald Flurry has explained that 2 Kings 14:26-27 are a prophecy for the end time about a movement to “blot out the name of Israel.” This attack is going on in America, Britain and its Commonwealth, and the State of Israel in the Middle East. The real author of this movement is not men, but Satan the devil.

Mr. Flurry wrote in “America Has No Helper”:

The lies, intimidation and oppression we see in our own government have a powerful source. The Bible says the father of lies, murders and wickedness is Satan the devil ….

He has great power, and he has a burning goal to blot out what God has done and is doing. …

Satan is trying to blot out the name of Israel. The good news is, God has a master plan to save Israel permanently—and He is carrying it out!

You can know the end result of this attack to blot out the name of Israel. To find out more, please read Mr. Flurry’s free booklet Great Again.