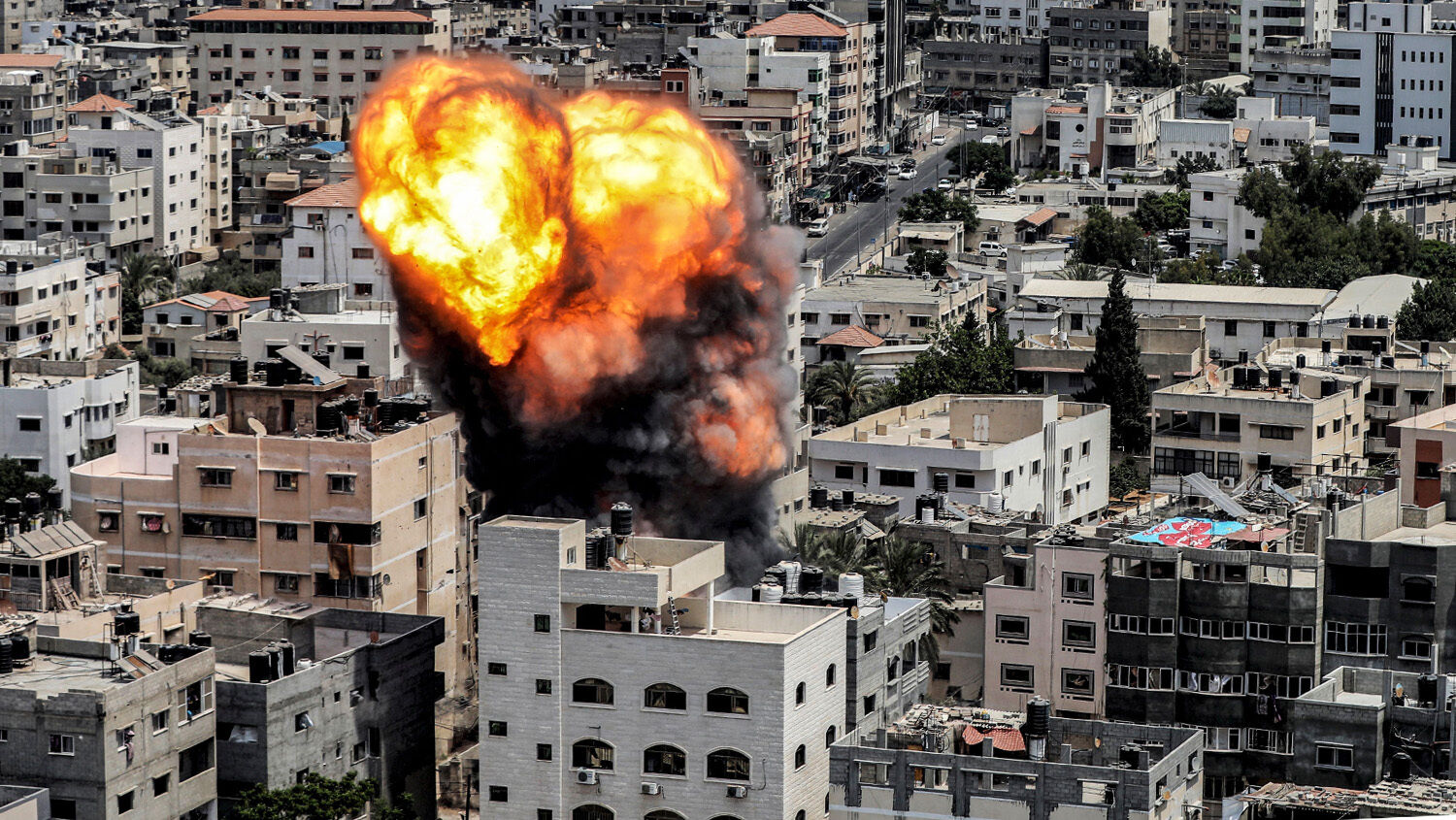 A fireball erupts as a result of an Israeli airstrike on a building in Gaza City on Aug. 6, 2022.
ASHRAF AMRA/AFP via Getty Images

What will be the aftereffects of the recent Israel-Gaza skirmish?

jerusalem
After a long day’s work outside, I spent late afternoon on Sunday helping a friend move house in Jerusalem, Israel. It felt like a peaceful, bright and sunny day in the Middle East. Yet chaos was taking place nearby.

Israeli Radio: “The recent rocket fire brought a quarter of the Israelis to shelters and targeted major residential communities such as Beersheba, Ashkelon, Ashdod, Rishon LeZion, Netvim and Yabna.” pic.twitter.com/zxfxYufv3E

The above map shows the destinations of rockets in Israel launched from Gaza.

In the latest chapter of the Israeli-Arab conflict, the Israeli Defense Forces (idf) carried out airstrikes in Gaza on August 5. Normally, wars in Gaza pit the idf against the terror group Hamas, which controls the Gaza Strip. This time around, however, there’s a different nemesis for Jerusalem: Palestinian Islamic Jihad (pij), another terror group considered even more extreme than Hamas.

pij recently threatened to attack Israel after one of its senior members was arrested in the West Bank. The airstrikes were in response to that. They killed 15, including Khaled Mansour, a senior pij leader who, according to the Israeli government, was responsible for terror attacks against Israelis for years.

Ending the career of a notorious terrorist is of course nothing to mourn. But the airstrikes against pij were like Israel whacking a hornet’s nest. And now the hornets are swarming.

The idf claims pij has fired about 1,100 rockets at Israel since hostilities started. Israel’s Iron Dome missile defense system has intercepted almost all of the rockets most threatening to Israelis. No Israelis are reported to have been killed.

Egypt mediated a ceasefire that went into effect late August 7.

Rockets being lobbed between Israel and Gaza are nothing new. But this latest skirmish has a couple of interesting circumstances.

The first is Israel’s upcoming election. On June 30, the Israeli Knesset voted to dissolve the hodgepodge coalition government of former Prime Minister Naftali Bennett. Elections are scheduled for November 1. Taking over from Bennett is his foreign minister, Yair Lapid. Lapid’s left-wing Yesh Atid party was the largest in the government coalition. But the coalition didn’t have enough seats in the Knesset to govern without Bennett’s right-wing Yamina group. The coalition ended up putting together right-wingers, left-wingers, centrists and even an Islamist Arab party. It lasted for little over a year. Nobody is surprised that the coalition fell apart.

But one of the reasons the coalition failed was because of the government’s weak stance toward Arab unrest. A recent wave of terror attacks—and the government’s reluctance to crack down on them so they don’t upset their Arab coalition partners—caused Bennett’s popularity to drop.

Perhaps Lapid wanted to avoid the same fate. After all, if he does well in November’s elections, Yesh Atid may be able to govern without as much of a hodgepodge coalition. And what better way to become a popular politician in Israel than to portray yourself as the protector from Gazan missiles?

It’s noteworthy that the Israeli airstrikes occurred without physical provocation from the Palestinian Islamic Jihad. pij was threatening some kind of retaliation for the arrest of their member, but the retaliation hadn’t happened yet. And Lapid must have known that such a barrage of rockets would have been coming after the airstrikes.

pij is a terror group and Mansour was a notorious terrorist with blood on his hands. The airstrikes may have been warranted. But they also present Lapid with a perfect photo op to clean up his government’s past image of weakness.

But it’s not only Yair Lapid whose image is being rehabilitated. What may be most incredible is how the war is, at least in small ways, rehabilitating the image of Hamas.

Here are some recent headlines from Haaretz, Israel’s “newspaper of record”:

The Jerusalem Post even reported on August 7 that Hamas was trying to get pij to agree to a ceasefire. The Post quoted Hamas leader Ismail Haniyeh as saying Hamas is engaging in “around the clock” efforts to “protect our people and stop the [Israeli] aggression.” Haniyeh has apparently been contacting several potential mediators to get a ceasefire underway.

This is the same Hamas that launched a war against Israel just last year.

Palestinian Islamic Jihad is a dangerous terrorist group. But Hamas isn’t much better and actually controls the Gaza Strip. Many media outlets point to pij’s sponsorship by Iran, the world’s biggest state sponsor of terrorism and the “king” of radical Islam. But Hamas is also backed by Iran. Both factions trace their history to the radical Muslim Brotherhood. Neither recognize Israel’s right to exist and both desire to establish an Arab Islamist state in Israeli territory. pij is considered to be more under Iran’s thumb than Hamas is; it’s leader, Ziad al-Nakhalah, was in Tehran when Israel began its airstrikes. But considering Hamas actually controls the government in Gaza, it is probably Iran’s more favored partner.

The latest skirmish may have the unintended side effect of reforming Hamas’s image. Hamas knows it has very low credibility with the rest of the world. Its leadership may then see the war as an opportunity: If they can sit it out and actually portray themselves as the champions of peace, maybe the world would soften up to them. This will give them more leverage against Israel the next time a fight breaks out.

Lapid also recently implied he wants to settle the Palestinian issue once and for all while in government. “I want to separate from the Palestinians,” he said in 2021. “I don’t have any interest in ruling over 2 million Palestinians in Gaza or 2.9 million in Judea and Samaria [the West Bank].”

Even if there is a split between Hamas and Iran down the road, Hamas isn’t going to change its desire for the total destruction of the State of Israel. Any problems Israel receives from Islamists would be a blessing for Tehran, even if they aren’t Iranian proxies per se.

Regardless what kind of “moderate” image Hamas may develop, it’s still a proxy of an Islamist regime dedicated to wiping out Israel. And it’s not changing its aims any time soon. The Israeli government dances with the devil to its own peril.

Iran’s growing influence in the Middle East is one of the trends the Trumpet watches most intently. This is because of a prophecy in the biblical book of Daniel. “And at the time of the end shall the king of the south push at him: and the king of the north shall come against him like a whirlwind, with chariots, and with horsemen, and with many ships; and he shall enter into the countries, and shall overflow and pass over. … He shall stretch forth his hand also upon the countries: and the land of Egypt shall not escape. But he shall have power over the treasures of gold and of silver, and over all the precious things of Egypt: and the Libyans and the Ethiopians shall be at his steps” (Daniel 11:40, 42-43).

It is an empire located south of the “king of the north,” or Europe. It has a very “pushy” foreign policy. It commands a vast proxy empire all over the Middle East and Africa.

The prophecy continues into Daniel 12. Verse 1 discusses “a time of trouble, such as never was since there was a nation even to that same time.” A companion prophecy in Matthew 24 calls this a time of “great tribulation, such as was not since the beginning of the world to this time, no, nor ever shall be. And except those days should be shortened, there should no flesh be saved [“alive”—Moffat translation]: but for the elect’s sake those days shall be shortened” (verses 21-22). These prophecies are discussing a nuclear World War iii.

According to Daniel 11, this war starts with a push from the king of the south. Other prophecies point to a radical Islamic takeover of Jerusalem as being the trigger of this war. Mr. Flurry continues:

Iran could also potentially get control of Jerusalem, its third-holiest site. I believe Jerusalem is more important to Iran than the oil is. The Islamic people have fought the Catholic Crusades for about 1,500 years over control of Jerusalem. Bible prophecy says one final crusade is about to erupt.

To learn more, please request a free copy of The King of the South. Also please read “Beware a Yair Lapid Premiership” to learn more about what the Lapid government means for Israel.