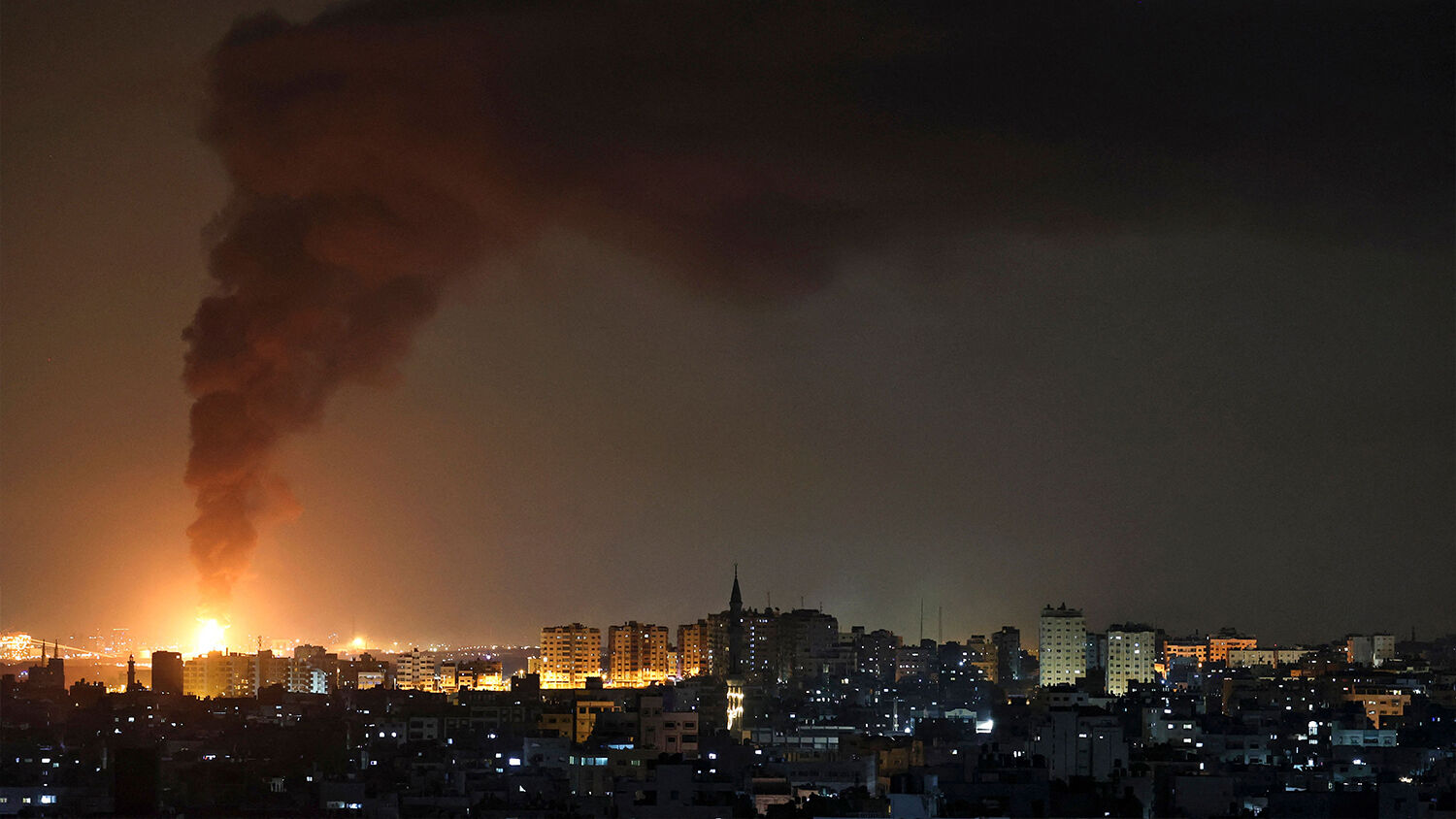 Smoke rises from an oil facility in the southern Israeli city of Ashkelon, on May 11, after rockets were fired by Palestinian Hamas terrorists from the Gaza Strip.
MOHAMMED ABED/AFP/Getty Images

One million Israelis flee to bomb shelters to escape the attack.

jerusalem
Over 130 rockets were fired toward central Israel on Tuesday evening as part of a violent campaign by Iran-backed terrorist factions in the Gaza Strip.

The massive barrage looked to partially overwhelm Israel’s Iron Dome system, which typically strikes down 90 percent of rockets fired from the Gaza Strip toward populated centers.

Hamas terrorists initiated a night of bloodshed launching dozens of rockets from #Gaza which caused a fatality, multiple injuries & sent millions of Israelis to bomb shelters.

Israel will do its utmost to defend its citizens from Hamas’ deliberate targeting of civilians. pic.twitter.com/ab8lCkLdHN

In this case, over a million Israelis heard the incoming fire command and had to seek shelter. Several rockets penetrated the Iron Dome, killing a woman in Rishon Lizzon and injuring dozens of others. In the Tel Aviv suburb of Holon, dramatic footage showed a rocket exploding next to a bus, injuring four people.

All incoming flights to Israel’s Ben Gurion Airport were halted for over an hour, with most of the flights being redirected to Cyprus

Ben Gurion Airport, which has been temporarily closed, under rocket fire from Hamas terrorists. Parts of shrapnel reportedly hit the runway as well.

So far, over 700 rockets have been fired into Israel from Gaza since Monday. Over 100 Israelis have been injured as close to a dozen buildings in the southern Israeli cities of Ashdod and Ashkelon were also hit by rockets. One of the attacked buildings was a school, although class had been canceled due to the rocket fire. All schools south of Herzilya have been canceled for Wednesday due to fears of increased rocket attacks.

Addressing the unprecedented attacks shortly before 11 p.m local time, Israeli Prime Minister Benjamin Netanyahu said, “Hamas and Islamic Jihad have paid and will continue to pay. We are all mourning those killed and praying for those who were injured. We all give our full support to the idf [Israel Defense Forces] and Israeli security forces. This campaign will take time.”

The idf has already struck over 500 targets inside the Gaza Strip, stated idf Chief of Staff Lt. Gen. Aviv Kohavi.

Palestinians’ decision to fire on Israel’s heavily populated areas, instead of the area closely surrounding the Gaza Strip, will likely receive a far stronger response from Israel.

Half of Israel’s population spent this evening in bomb shelters due to rocket fire from Gaza.

We are under attack. This maps shows you all the places in Israel that were under fire tonight. #IsraelUnderFire #IsraelUnderAttack pic.twitter.com/pnR1ZChF9G

The dramatic increase in attacks comes a day after the Hamas terrorist group targeted Jerusalem with rockets for the first time in seven years.

In the midst of the attack, President Donald Trump issued a statement stating that Joe Biden’s lack of support for Israel is encouraging new attacks on the Jewish state. He wrote (emphasis added throughout):

When I was in office we were known as the Peace Presidency, because Israel’s adversaries knew that the United States stood strongly with Israel and there would be swift retribution if Israel was attacked. Under Biden, the world is getting more violent and more unstable because Biden’s weakness and lack of support for Israel is leading to new attacks on our allies. America must always stand with Israel and make clear that the Palestinians must end the violence, terror and rocket attacks, and make clear that the U.S. will always strongly support Israel’s right to defend itself. Unbelievably, Democrats also continue to stand by crazed anti-American Rep. Ilhan Omar, and others, who savagely attack Israel while they are under terrorist assault.

President Trump’s statement was echoed by Israeli commentators such as Caroline Glick, who posted on Twitter Tuesday: “I miss him. Things were a lot more peaceful around here a few months ago.”

I miss him. Things were a lot more peaceful around here a few months ago. pic.twitter.com/8wEgUEyl2d

Indeed, as we wrote yesterday, the dangerous spread of violence across Jerusalem and throughout all Israel amounts to a greatly empowered Arab street inside Israel.

Three weeks ago, before the current violence, Trumpet editor in chief Gerald Flurry warned our readers to watch for increased terrorist attacks because of the Biden administration’s position. He wrote:

For America to support Iran makes no sense, unless you realize that this leader is trying to blot out the name of Israel! Iranian leaders talk about this all the time. This nation wants to blot out the name of Israel. That includes America and Britain. Yet Americans allowed their president to enact that foreign policy. And now, that foreign policy is back! Biden is empowering Iran so it may soon obtain nuclear weapons. I am certain we will have more Palestinian terrorist attacks now because of who is in charge.

Almost immediately after that statement was printed, the violence in Jerusalem increased. The connection to the Biden administration’s pro-Palestinian position is unmistakable.

As Israel contends with the rocket fire during the oncoming days, the Biden administration will push hard for Jerusalem to end its forceful response to the Gaza terrorists. Not only does Israel have an enemy to face that is firing rockets indiscriminately on its civilians, it also has its once-greatest ally trying to shut down its response. Israel is facing a wicked force in the White House and is suffering for it.