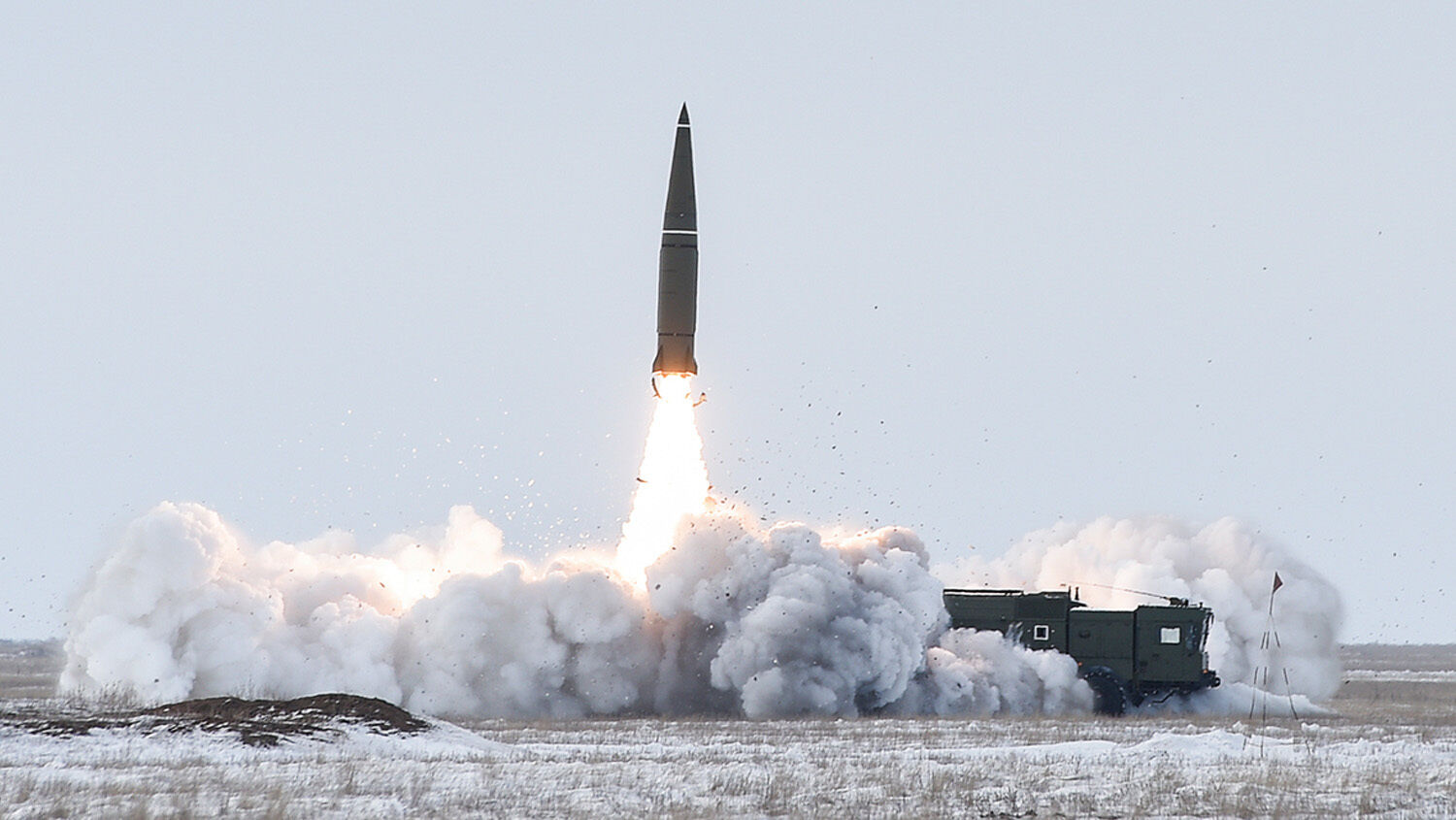 An Iskander-M launches in 2018.
Public Domain

How will Europe respond to Putin’s atomic war games?

Russian President Vladimir Putin announced on June 25 that he will supply Belarus with Iskander-M missile systems. Putin made the comments in a conference with Belarussian President Alexander Lukashenko in St. Petersburg, Russia. As the war in Ukraine drags on, Putin is pulling his ally more and more into supporting his war. This latest development is the most concerning of all. The Iskander-M missile system can be outfitted with nuclear warheads.

“As you and I have agreed upon, you were asked about this, we made a decision,” Putin reportedly told Lukashenko. “In the coming months, we will supply Belarus with Iskander-M tactical missile systems, which, as it is known, can use both ballistic and cruise missiles both in the standard and nuclear modifications.”

Putin and Lukashenko may or may not outfit the missile system with nuclear warheads. But the suggestion they would is cause for concern. The Iskander delivery comes after Lukashenko requested a “symmetrical response” to alleged nuclear-armed flights from the North Atlantic Treaty Organization near Belarus. In February, Belarus announced it would allow Russia to host nuclear weapons on its soil. No nato members bordering Belarus (that we know of) station nuclear weapons on their soil.

Lukashenko would probably prefer to keep Belarus’s nuclear status ambiguous. His regime is famous for extreme and unpredictable antics. Even if he doesn’t actually store nuclear weapons on his soil, the ambiguity may keep nato from stepping on his toes too much. Belarus is to Europe what North Korea is to Asia: a despotic, Communist relic that nobody really knows how to deal with.

In any event, Russia has a stockpile of nuclear warheads thousands strong. There would be plenty to share between Moscow and Minsk.

It’s unknown if Lukashenko actually wants nuclear weapons or if Putin is pressuring him to station Russian nukes. Putin has used the Ukraine war as an excuse to draw Belarus more and more into Russia’s orbit. Or as Putin’s vassal, Lukashenko could foresee Belarus getting sucked into a war with nato and wants to prepare for such.

Belarus hosting nuclear weapons isn’t what is most concerning, however. It’s the intended targets.

The Iskander-M system is designed to accommodate short-range ballistic missiles. Unlike the more well-known intercontinental ballistic missiles, which are meant to attack enemies continents away, short-range missiles travel only 620 miles or less. They aren’t meant for worldwide nuclear war between the United States and Russia. From Belarus, they couldn’t even reach Britain or France, Western Europe’s two main nuclear powers. But they could comfortably reach major cities in Ukraine, Poland, the Baltic states and other East European countries. Depending on where they are stationed, they could even reach major cities in Germany.

In other words, the Iskander-M prepares Belarus for a local nuclear war in Europe. Most of the countries within range don’t host nuclear weapons. Intercontinental ballistic missiles stationed in Belarus wouldn’t be much different from being stationed in Russia. But short-range ballistic missiles indicate Belarus (which really means Putin) could seriously be contemplating dropping a missile on Warsaw, Poland, or Vilnius, Lithuania—or Berlin or Dresden, Germany.

Unlike most countries in the region, Germany hosts U.S. nuclear weapons. Berlin is in the country’s east, relatively close to Belarus. With the Iskander-M transfer, Putin may have in mind a preemptive strike on Berlin before German nuclear bombs make their way east. If Lukashenko wanted to attack nato’s nuclear capabilities, Germany would be the obvious target.

Germany is often called the unofficial leader of Europe. It has the European Union’s largest economy, population and one of its largest militaries. At one point, former German Chancellor Angela Merkel was even called “the leader of the free world.”

Yet Germany isn’t using its leadership in the Ukraine crisis. Between its farcical military assistance to Ukraine, reluctance to wean itself off of Russian energy, and Chancellor Olaf Scholz’s gaffes, Berlin is neglecting its leadership potential. Under Scholz, Germany looks very weak. Like Neville Chamberlain before World War ii, Scholz has a lot of power to use but refuses to do so. (There is reason to suspect this is due to some sort of agreement with Russia rather than incompetence. But that’s not what the German public sees.)

This hasn’t just been a problem with Olaf Scholz, however. People used to say the same thing about his predecessor, Angela Merkel.

“On Feb. 6, 2015, the leaders of Germany and France traveled to Moscow,” Trumpet editor in chief Gerald Flurry writes in his booklet A Strong German Leader Is Imminent. “They had been invited by Russian President Vladimir Putin to discuss the crisis in Ukraine. The leaders of these three nations forged some kind of a deal. Critics called it a terrible deal. They said it was so bad that they likened German Chancellor Angela Merkel to Neville Chamberlain.”

Toward the end of 2014, Garry Kasparov, the former chess grandmaster who has become an outspoken critic of Vladimir Putin, said: “My problem is today you have so many politicians lining up to become a new Chamberlain. Where are the Churchills?”

Churchill warned throughout the 1930s that Western Europe was going to have war with Germany if it didn’t stop the aggression of the Nazis. If only the nations of Western Europe had allied together, they could have easily stopped Adolf Hitler, but they were afraid to. They wanted to make peace instead, and look what happened: the worst war ever recorded in human history! But another war is coming that will be far worse! …

This is a strong sign of the present mood in Europe, especially in Germany.

Scholz replaced Merkel last year. His policies make him look even more like Chamberlain than Merkel. This only feeds Germany’s appetite for a strong, decisive leader.

When a dictator keeps saber-rattling and nobody opposes him, it’s only a matter of time until he carries out his threats. Germans know this better than anybody. Soon they will get fed up with Berlin’s inaction and demand change.

And it won’t take long for Germans to get the change they want. Mr. Flurry called the Merkel-Chamberlain comparisons “a sign that a strong ruler is about to come on the scene in Germany.” Scholz’s Chamberlain-esque dealings with Russia are even more of a sign.

To learn more, please request a free copy of A Strong German Leader Is Imminent.