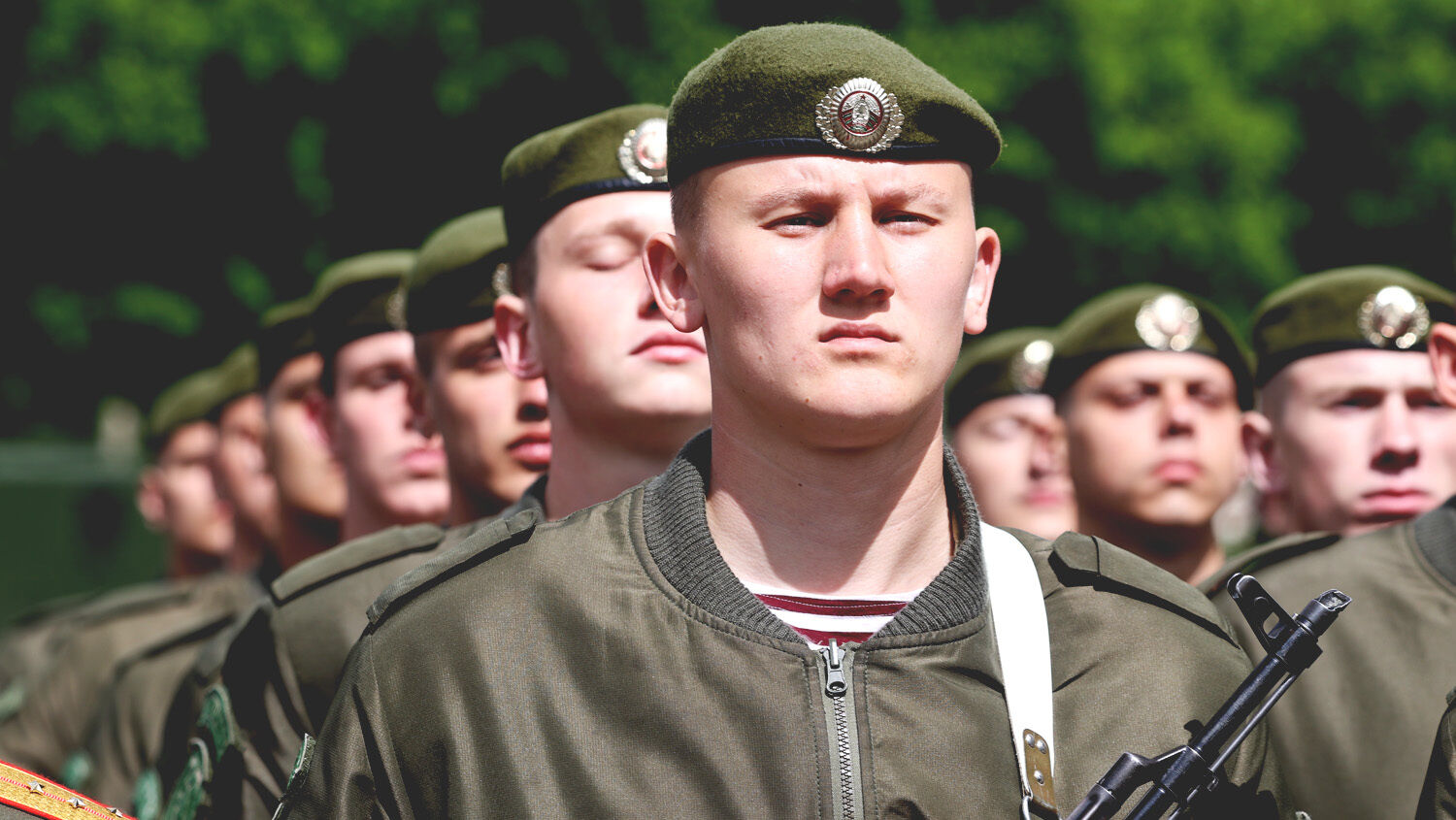 Soldiers of the military unit in Minsk, Belarus, on May 28
Stringer/Anadolu Agency via Getty Images

Belarus will hold military mobilization exercises from June 22 to July 16, Belarussian state media reported on May 30. The exercises will be held in Belarus’s Gomel region, in the southeast of the country near Ukraine. “Events of this kind are traditionally held to increase the combat and mobilization readiness of military commissariats, and improve military knowledge and practical skills of those liable for military service,” said Andrey Krivonosov, military commissar of the Gomel region.

Belarus is one of Russian President Vladimir Putin’s closest allies. With the recent tensions between Russia and the North Atlantic Treaty Organization, Belarus has been bracing itself for potential war with nato.

Gomel, however, is nowhere near Belarus’s border with nato. It’s in the opposite direction, toward eastern Ukraine. Instead of preparing Belarus’s forces defensively against nato, President Alexander Lukashenko could be preparing for an invasion of Ukraine. Belarussian troops have so far not fought in Ukraine. But Putin did use Belarus as a launchpad for Russian soldiers to enter Ukraine.

Could Lukashenko himself enter the fight?

It remains to be seen. If he were to invade, announcing mobilization exercises near Ukraine’s border weeks ahead of time is not the most strategic move. But Lukashenko is an unpredictable dictator who has a history of making risky and adventurous moves.

There is a more important question than if Belarus would invade, however. That question is: Why would Belarus invade Ukraine.

It’s clear why Putin wants Ukraine. In 2005, he called the collapse of the Soviet Union the 20th century’s “greatest geopolitical catastrophe.” His main goal as leader of Russia is to resurrect the Soviet empire. Ukraine, one of the main former Soviet republics, is a key country he needs to control to make his dream come true. Ukraine’s capital, Kyiv, is also the spiritual center of Russian Orthodox Christianity. Putin cannot afford to not have Ukraine in his sphere of influence.

Russia is one of the world’s great powers. By comparison, Belarus is a small, poor, isolated pariah state. It’s too small to have a sphere of influence of its own in Europe. If it were to go to war with Ukraine, it would likely suffer major losses. Global Firepower ranks Ukraine the 22nd-most powerful military in the world; Belarus is ranked at 52. (Russia, which is struggling against Ukraine’s military, is ranked second.) Belarus’s economy is also on the small side, with the 78th-largest gross domestic product in the world. Ukraine’s gdp is the 57th-largest. Some of Lukashenko’s escapades have gotten Belarus slapped with international economic sanctions. If the landlocked country went to war with Ukraine, Western sanctions could seriously hurt Belarus’s economy.

It would make no sense for Belarus to go to war with Ukraine—if Belarus were a completely independent country. But Belarus isn’t. The only reason Lukashenko would ever fight with Ukraine is likely if Vladimir Putin made him do so. The world may be focused on Putin’s conquest of Ukraine. But Putin also accomplished an almost silent takeover of Belarus—without firing a single shot. The Gomel exercises demonstrate this.

The Trumpet bases its analysis of Russian politics on a prophecy in Ezekiel 38. Ezekiel wrote of a “prince [‘exalted one’—Strong’s Concordance] of Rosh, Meshech, and Tubal” (verse 2; New King James Version). This “prince” is on the scene “in the latter years” (verse 8), a time far in the future from when Ezekiel wrote his prophecy. He commands a powerful military (verse 4) and can project his might “like a storm” (verse 9). He is a feared leader with influence over many countries (verses 5-6).

Trumpet editor in chief Gerald Flurry writes in his free booklet The Prophesied ‘Prince of Russia’:

Scholars generally agree that “Gog” is Russia, and that “the land of Magog” includes China. The descendants of Meshech and Tubal have been found together throughout history. In Assyrian and Greek histories, Meshech appears as Musku, Muski or Mushki—all names related to the Russian spelling of Moscow, as you can read in the International Standard Bible Encyclopedia. What about Tubal? On the eastern side of the Ural Mountains lies the city of Tobolsk, named after the Tobol River, a name derived from Tubal. Tobolsk was once the seat of Russian government over Siberia and was basically considered Russia’s Asian capital. …

Rosh was the ancient name of Russia, once called Rus. Many encyclopedias and commentaries (such as the Jamieson, Fausset and Brown Commentary) recognize this. So who is this “prince” of Russia, Moscow and Tobolsk?

The Trumpet identifies this “exalted one” of Russia as Vladimir Putin.

Mr. Flurry continues: “The use of all three names shows that this is an individual ruler of all the peoples of Russia, from the west to the east. … This giant swath of land indicates the prince will probably conquer more nations of the former Soviet Union.”

Right now, most people are focusing on Russia’s takeover of Ukraine. How the Ukraine war will end remains to be seen. Kyiv may come out of this conflict still relatively intact. But whatever happens to Ukraine, the war shows that Putin’s silent takeover of Belarus is a done deal. Belarus may have its own capital city, flag, anthem and borders, but its days of functioning as an independent country are over.

To learn more, please read “Belarus Is Back in the USSR.” Also request a free copy of Mr. Flurry’s booklet The Prophesied ‘Prince of Russia.’