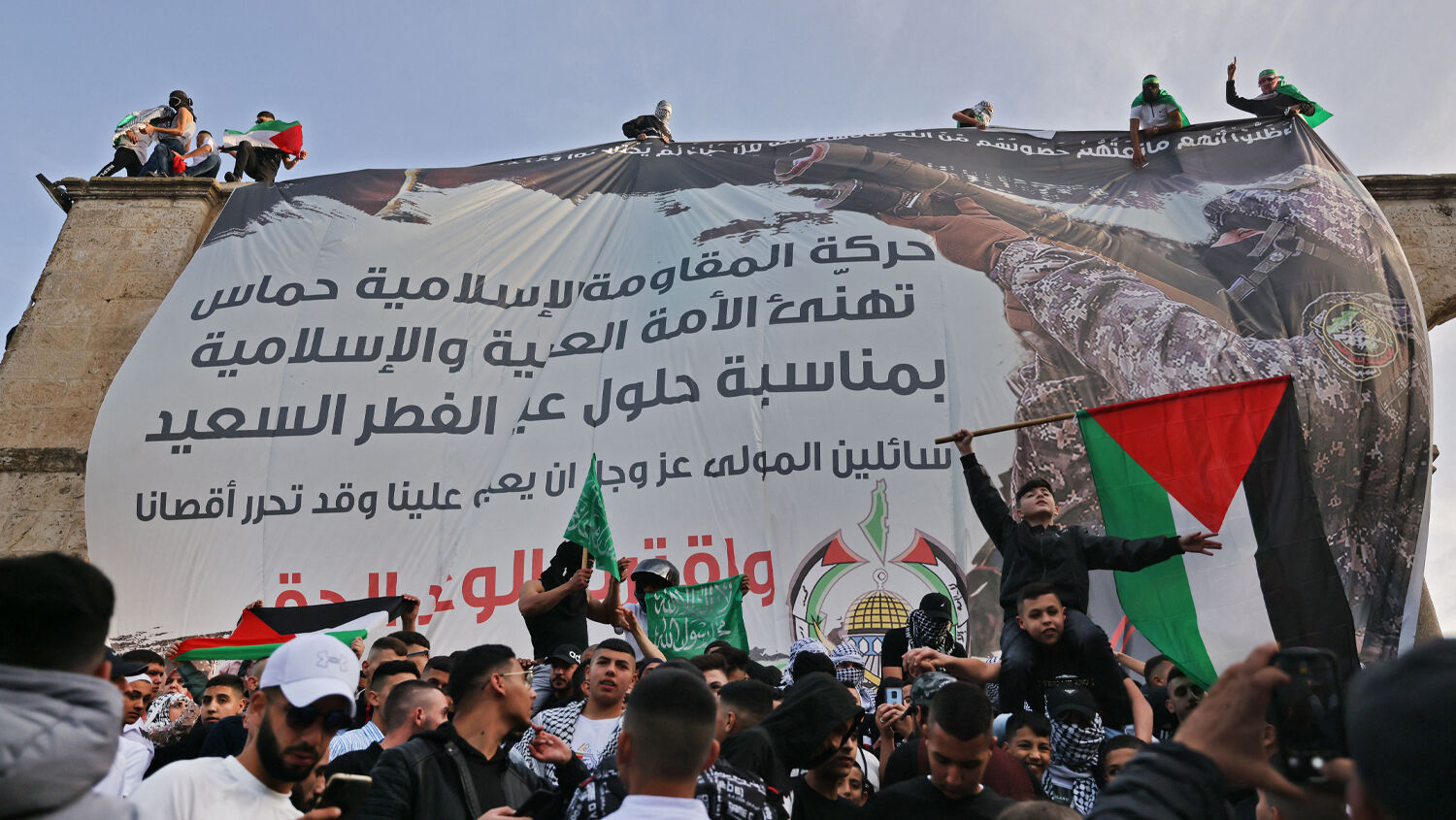 Supporters of the Palestinian Hamas movement wave Palestinian and Islamic flags by the Dome of the Rock mosque at the Al-Aqsa Mosque complex in Jerusalem on May 2, 2022.
AHMAD GHARABLI/AFP via Getty Images

A Middle Eastern king calls for the capture of Jerusalem. From the Old City’s walls flies a banner glorifying jihad. Mosques are built to claim Haram al-Sharif for Islam. Infidels are commanded to leave. A clash is brewing between the Arabs and their Western opponents. It has the potential to spiral out of control and involve the whole world.

This isn’t a scene from the medieval crusades. This is happening right now in Israel. And the stakes are higher now than any time in the Middle Ages.

The main source of tension is the Temple Mount. Jews venerate the site as the location of the Western Wall, believed to be a remnant of Herod’s temple complex and the holiest site in Judaism. For Muslims, the Temple Mount (or Haram al-Sharif in Arabic) is the site of the al-Aqsa Mosque and the Dome of the Rock, commemorating Mohammed’s journey to heaven. Israel gained control of the Temple Mount from Jordan after the 1967 Six-Day War. But that hasn’t stopped Israel’s Arab population from staging uprisings to get control of the site.

To preserve the peace, Israel enforced a status quo on the Temple Mount, beginning in 1967. The Jerusalem Islamic Waqf, a Muslim religious trust sponsored by Jordan, would control religious administration of the Muslim holy sites while Israel would be responsible for Temple Mount security. Moshe Dayan, Israeli defense minister during the Six-Day War, organized this status quo. The Waqf has control over policies like who is and isn’t allowed to pray on the Temple Mount (which effectively bans Jews), and flags of any sort are forbidden to fly from there. All peoples were allowed to visit the Temple Mount. Israeli sovereignty and law would apply to the area.

There has been no literal violent occupation of the Temple Mount—yet. But many prominent Muslim groups are chipping away at the status quo, getting more and more control over the mountain. And Israel is doing little to nothing about it.

One of the more visible changes to the site has been the addition of four new mosques. The Dome of the Rock was an Islamic shrine but not a mosque; it was converted to one decades back. Solomon’s Stables, an ancient structure used as stables during the crusader period, has also been converted to a mosque. A third mosque, Ancient al-Aqsa, was constructed underneath the original al-Aqsa Mosque in 1998. In 2019, a prayer area was set up near the Temple Mount’s Golden Gate, which was later converted into a mosque.

One of the reasons for these expansions was the changing definition of the Temple Mount. Before, “al-Aqsa” referred to the al-Aqsa Mosque and the compound as a whole was known as Haram al-Sharif. But many Muslims began calling the entire mountain itself “al-Aqsa.” This implies Muslim control over the whole area.

Jewish access to the mount has also been steadily whittled away. Originally, Jews had unrestricted access to the Temple Mount for most of the day. Jews could even visit mosque interiors. But one by one, the Waqf closed different gates of entry to non-Muslims. Now, non-Muslims can only enter through the Mughrabi Gate, which forms part of the Western Wall. Jews can only visit Sunday through Thursday for 4½ hours in a day.

The authority of Israeli law is also challenged. Jerusalem Municipality overseers are no longer allowed to visit the compound. The Israel Antiquities Authority cooperates with the Waqf in preserving the Temple Mount’s ancient heritage. But the Waqf isn’t afraid of doing its own construction projects at the expense of destroying artifact-filled earth.

Then there is the issue of flags. The flag ban is enforced—when it’s an Israeli flag. But some terrorist groups apparently can get away with flouting the ban. On May 2, Hamas—the same group that waged war with Israel last year from Gaza—unfurled a gigantic banner on the Temple Mount depicting a rocket launcher wishing people a happy Ramadan. The one exception to the ban on Israeli flags seems to be when Arab protesters bring them to be burned.

Jordan reportedly submitted a letter to the Biden administration, demanding the Waqf (Muslim religious guards) be given total control over the Temple Mount. It wants to institute a dress code for non-Muslims, as well as limit visitors to groups no larger than five people. Jordan is also demanding that Israel Police no longer be allowed on the Temple Mount, even if rioters attack Jewish worshipers at the Western Wall or visitors to the site itself.

Its demands also include giving the Waqf the authority to severely restrict non-Muslim visits to the Temple Mount, requiring non-Muslims to apply to visit in writing in advance, and setting restrictive tour routes of no more than 500 feet (150 meters) in each direction for non-Muslim visitors.

Abdullah’s requests are bold. The Biden administration has a history of backstabbing Israel, especially regarding Jerusalem’s relations with its Arab neighbors. Jordan could be seizing its chance while Joe Biden is in the White House. Another potential motive could be Israel’s friendship with the United Arab Emirates. The U.A.E. is a wealthy state with a strong military. Abu Dhabi has been more supportive of Israel’s policies at the Temple Mount. Abdullah may worry Jordan could lose influence.

Jerusalem is unlikely to give Jordan any concessions. But either way, Arabs inside and outside of Israel are claiming more and more of the Temple Mount as their own. And they seem to be hanging onto their gains.

This is not a minor local issue. Wars were waged in living memory over the Temple Mount and have been for thousands of years. The Middle East is already a volatile region with its fair share of conflict. The Temple Mount, due to its sacredness to both Jews and Muslims, is arguably the biggest powder keg in the area.

Hamas, King Abdullah and others are throwing a few more matches at it.

Most of this would likely have never happened if the Israeli government were strong. But Israeli Prime Minister Naftali Bennett’s coalition is weak (controlling 60 of the Knesset’s 120 seats). One of Bennett’s coalition partners is Ra’am, an Arab Israeli party with Islamist sympathies. He cannot afford to lose their support, which might explain Bennett’s soft response to the recent terrorist attacks on Israel.

Everything the Arabs have tried of late hasn’t resulted in too much bloodshed. But is it a harbinger of a more violent Arab takeover of the Temple Mount? The sharks have smelled blood; it’s only a matter of time before they stop circling and attack.

One source says the conflict over the Temple Mount will get much more violent. That source is the Holy Bible.

“Behold, the day of the Lord cometh, and thy spoil shall be divided in the midst of thee. For I will gather all nations against Jerusalem to battle; and the city shall be taken, and the houses rifled, and the women ravished; and half of the city shall go forth into captivity, and the residue of the people shall not be cut off from the city” (Zechariah 14:1-2). The context of this prophecy is the Day of the Lord, the time of worldwide trouble before the Second Coming of Jesus Christ, a yet-future event (see Joel 2:31 and Revelation 6:12-17). Notice that before the Day of the Lord arrives, half of “the city” (referring to Jerusalem) is to fall into captivity.

The nation of Israel was established in 1948. At that time the Jews only had roughly one half of Jerusalem. The Arabs had East Jerusalem. Zechariah 14 is also a prophecy that the Jews would conquer all Jerusalem, because in order for half the city to be taken just before Christ returns, the whole city must be controlled by the Jews just before that time! The Jews did take full control in the 1967 war.

Hamas has decorated the Temple Mount with a banner glorifying war. Jordan has called for complete control of the Temple Mount. The Arabs already feel emboldened. The Israeli government isn’t responding with much action. Will the Arabs feel even more emboldened in the days to come?

A violent takeover of the heart of Jerusalem may be sobering. It’s certainly not pleasant to think about. But the same Bible that prophesies of Jerusalem’s coming fall also prophesies of incredible hope. Israel has been at war with its Arab neighbors on and off since it became a state in 1948. What it needs almost more than anything is hope. “We will see this prophecy in Zechariah 14:1-2 fulfilled very soon. And while it will involve some sickening atrocities and bloodshed, it is directly connected to the greatest news this world has ever heard!” writes Mr. Flurry.

Notice verse 3: “Then shall the Lord go forth, and fight against those nations, as when he fought in the day of battle.” Jerusalem means “city of peace.” For most of its history, Jerusalem has not known peace. But the prophecy in Zechariah 14 reveals that half of Jerusalem falling is a sign of the greatest news for both Jews and Arabs: God Himself will put an end to the violence!

“And it shall come to pass, that every one that is left of all the nations which came against Jerusalem shall even go up from year to year to worship the King, the Lord of hosts, and to keep the feast of tabernacles” (verse 16). The Feast of Tabernacles is one of God’s seven annual festivals (see Leviticus 23). It is also called the “feast of ingathering” (Exodus 23:16). After His return, Jesus Christ is going to gather the whole world and teach them the real way to peace. And it will be done from Jerusalem.

Notice another prophecy: “And it shall come to pass in the last days, that the mountain of the Lord’s house shall be established in the top of the mountains, and shall be exalted above the hills; and all nations shall flow unto it. And many people shall go and say, Come ye, and let us go up to the mountain of the Lord, to the house of the God of Jacob; and he will teach us of his ways, and we will walk in his paths: for out of Zion shall go forth the law, and the word of the Lord from Jerusalem. And he shall judge among the nations, and shall rebuke many people: and they shall beat their swords into plowshares, and their spears into pruninghooks: nation shall not lift up sword against nation, neither shall they learn war any more” (Isaiah 2:2-4).

Soon, Jerusalem won’t belong to Israel, Jordan or any other modern country, but to God—and everyone will be given the opportunity to worship at this precious city. Mankind will learn the way of peace, real peace, from Jerusalem. Arab will not lift up a sword against Jew, nor Jew against Arab. While the security situation at the Temple Mount grows more dire, this hope is as sure as tomorrow’s rising sun.

To learn more, please request a free copy of Jerusalem in Prophecy.