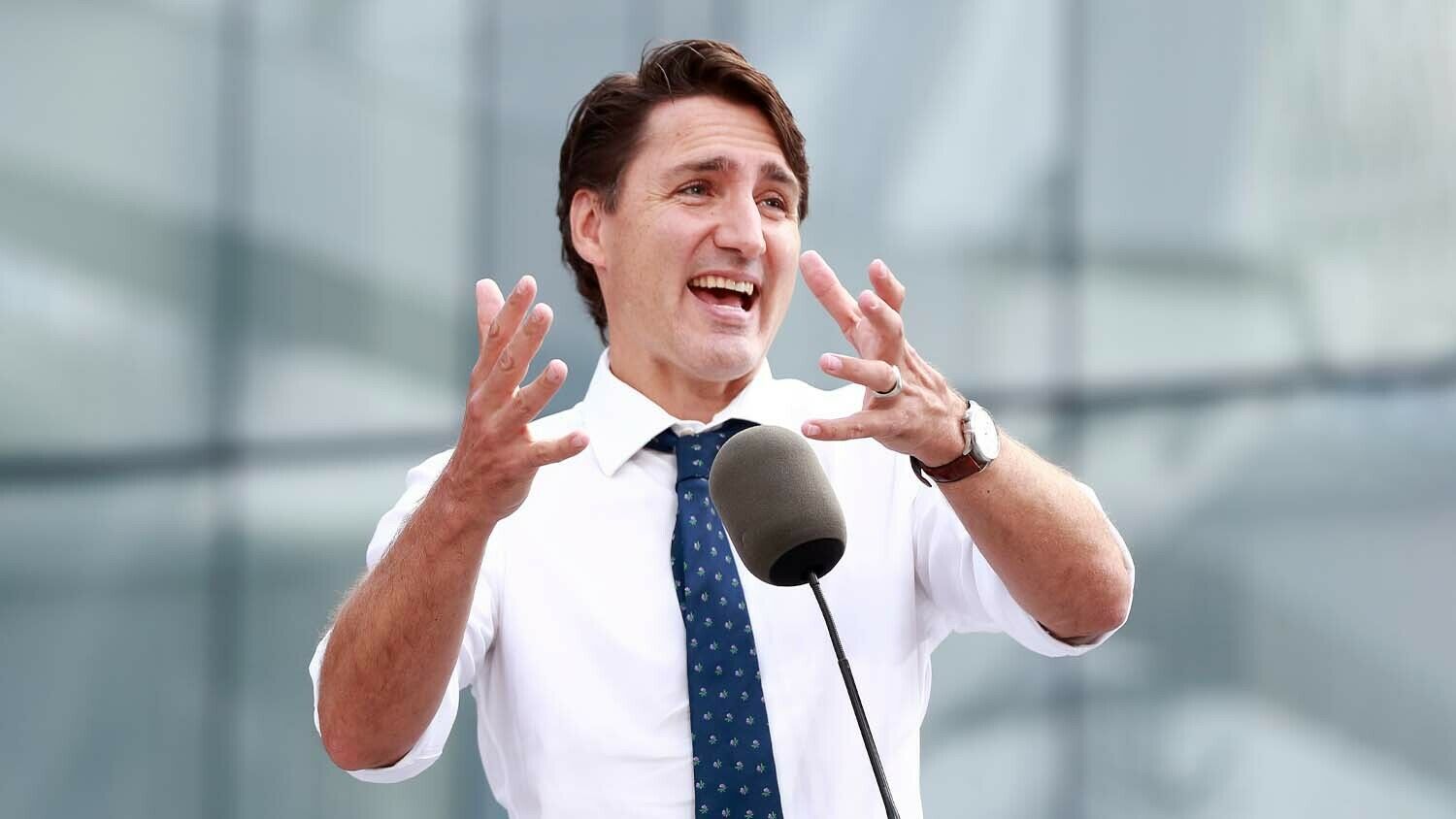 As election day nears for Canadians, the stakes of the outcome are critical. You would not know that by how the media has covered the election. It has been labeled “the election nobody wants,” since it is in the middle of the fourth wave of the coronavirus pandemic. Polls show a 56 percent chance of the Liberals returning to a minority government: the status quo would remain.

However, that is only a smokescreen from the radical-left media to cover how consequential this election could prove to be for Canada. Incumbent Prime Minister Justin Trudeau’s promises on the campaign trail have exposed an agenda that is increasingly authoritarian.

The Trumpet has reported on how Trudeau called the election during the media-hyped fourth wave of covid-19, which will increase mail-in voting, opening the door for fraud. Big Tech and the media are allied with the radical-left narrative and will censor any information questioning the election or pandemic. Now with the election less than one week away, the evidence is pointing to the consequences of a Trudeau victory amounting to a Communist coup.

On August 15, Trudeau announced that, if elected, he would make covid vaccines mandatory for all federal employees and all air travelers in Canada, for both domestic and international flights. Shortly afterward, Trudeau promised $1 billion for provinces that create a vaccine passport. British Columbia, Manitoba, Ontario, Quebec, Nova Scotia and Newfoundland already have vaccine passports or “proof of immunization” requirements for nonessential services.

Trudeau has been pressuring the provincial leaders to mandate vaccines. In 1996, the Public Health Agency of Canada published the Canadian National Report on Immunization, which states: “Unlike some countries, immunization is not mandatory in Canada; it cannot be made mandatory because of the Canadian Constitution.”

Furthermore, Bill S-201 was passed in 2017 to prohibit genetic discrimination, which also bans making genetic tests a condition for providing goods and services or agreements and contracts, or even disclosing the results. The covid pcr tests are genetic tests according to the definition in the legislation.

Despite these laws, Trudeau has promised to protect businesses from legal challenges to proof-of-immunization policies. Global News reported on September 6: “[Trudeau] says his party will table legislation if reelected that will ensure organizations can require immunization without fear of legal challenges.” Blacklock’s Reporter wrote on September 2: “A reelected Liberal cabinet would strip Canadians of any legal right to challenge mandatory vaccination orders, Prime Minister Justin Trudeau said yesterday. The federal Privacy Commissioner has warned compulsory vaccines breach the Privacy Act: ‘It is an encroachment on civil liberties.’”

These promises would take away Canadians’ basic rights and freedoms. It would also lay the groundwork for removing any legal avenues for citizens to challenge authoritarianism and lawlessness from the government.

However, Trudeau has not stopped there. His campaign has faced several protests, one in which gravel and debris were thrown at Trudeau and his security. Trudeau and the media have labeled these protesters “anti-vaxxers.” cbc ran an article calling them the evolution of “far-right ideology.”

This has coincided with thousands of Canadians and first responders protesting vaccine mandates across the country. These mandates threaten jobs and often have no room for exemptions. Some of these protests have taken place in front of hospitals, although none of the protesters have interfered with patients or ambulances. In response, Trudeau has said he will change the criminal code to ban protests around hospitals, clinics and pharmacies.

Canada’s criminal code on protests is already strict. Why would Trudeau want to add laws to prohibit protests? Is it to protect the health-care workers, or is it to eventually ban protests against a fraudulent election?

The Epoch Times reported that the Liberal’s election platform includes a promise to ban charitable status for organizations that oppose abortion:

The Liberal Party’s “Forward. For Everyone.” platform says that “a reelected Liberal government will … [n]o longer provide charity status to anti-abortion organizations (for example, Crisis Pregnancy Centers) that provide dishonest counseling to women about their rights and about the options available to them at all stages of the pregnancy.”

This is a blatant attack on political opponents and would weaponize the Canadian Revenue Agency to persecute organizations that spread “misinformation” about abortion, but that slippery slope could lead to anything the government labels as misinformation.

The Western Standard reported that a reelected Liberal government would investigate banning all hunting rifles and shotguns in Canada. Blacklock’s Reporter indicated a poll completed by the Liberal government indicated one third of Canadians favor a gun ban, but that those in favor of the ban are “not very or at all familiar” with firearms. The report stated 25 percent of Canadian households own a firearm.

The Trumpet has reported on how Bill C-10 is a major attack on free speech in Canada. The bill would give an unelected council the power to censor and fine content creators for anything they deemed as harmful, hate speech or violent. The election killed the bill, but if Trudeau gains a majority he could ramrod the legislation through without amendments.

A reelected Trudeau government, possibly with a majority in Parliament, would restrict travel inside Canada, impose vaccine mandates, move toward restricting protests and legal challenges to authoritarianism, use the Canadian Revenue Agency to persecute political opponents, move toward banning firearms, and censor the media that are not already sold out to the government.

Those policies all point toward Communist dictatorship. The radical left pursues fraudulent elections in order to reach their goal, as Trumpet editor in chief Gerald Flurry wrote in the January 2021 Trumpet magazine: “They don’t want freedom. They tell you what to do, and you have to do it, or else! The left doesn’t want opposition. They want tyranny! That is because they are following Satan the devil, who has a stranglehold on them!”

Tyranny is the goal of the radical left, whether in Canada or the United States. Trudeau has been bold in announcing these promises that obviously violate Canadian rights and freedoms. Does that boldness come from the confidence that he will win no matter what?

Before the 2020 United States election, the media began pushing the narrative of a “red mirage.” The Trumpet wrote in September 2020: “In his September 3 episode of Trumpet Daily Radio Show, host Stephen Flurry reported that Democrats are preparing for the ‘red mirage’—a scenario in which Republicans appear to have an overwhelming victory on November 3, but Biden eventually ‘wins’ after all the mail-in ballots are counted.”

A similar strategy could be implemented in Canada. Conservative leader Erin O’Toole surged ahead in polls, and Trudeau has framed himself as the underdog. This could be the “blue mirage” (the Conservative Party color in Canada is blue, and Liberals are red).

Chief Electoral Officer Stéphane Perrault, a lifetime lawyer and bureaucrat (who was a clerk for feminist Supreme Court Justice Claire L’Heureux-Dubé), announced that due to the influx of mail-in voting, the election results may not be known five days after September 20. Elections Canada has also made wearing a mask mandatory to vote, telling local officials to call the police if voters do not comply. Elections Canada will also not be sending ballot boxes to oil sand work camps this year due to covid protocols, meaning thousands of workers whose jobs are threatened by Trudeau’s promise to phase out fossil fuels will be deprived of their chance to vote this year.

Could O’Toole’s Conservatives gain an early lead in several districts, but then slowly have them flipped to Trudeau as the mail-in ballots are counted?

Despite the media touting Canada as a bastion of fraud-free voting, it may actually be easier to steal an election in Canada than in the United States.

One District at a Time

Canada is divided into electoral districts (which equals a seat in Parliament) within the provinces. Each district elects by popular vote an individual representing that district to Parliament. Whichever party has the most districts will form a government. The leader of the party becomes prime minister. The leader is selected by the party, not the general public.

To form a majority government, one party must win 170 seats, or districts, out of a total of 338. The districts are calculated based upon population density and therefore have a huge disparity between the populous east and the sparse west, and between urban centers and rural regions.

For example, Ontario has 121 seats; Quebec, 78; British Columbia, 42. There are 199 seats between Ontario and Quebec (that’s 58.8 percent). Thirty-four percent of all seats (116 districts) are in 10 cities: The Greater Toronto area has 45 seats alone. Experts are predicting that the election will hinge on the districts in Toronto, Montreal and Vancouver. (You can view the districts and results of the 2019 election by clicking here.)

What does all this mean? In order to steal the election, Trudeau would need to ensure Liberals win in 170 districts from anywhere in Canada, doesn’t matter what province or region. The election could be stolen one district at a time over the three to five days it will take to count all the mail-in ballots. The radical left does not need to focus on a few swing states or counties, they could literally steal any district anywhere, and it will add a seat to their goal of reaching 170.

However, the most likely locations for fraud would be the more populous districts in Ontario, Quebec and British Columbia, where covid hysteria is higher and where there are more registered voters to draw mail-in ballots from.

What makes a steal even easier to pull off is the smaller scale of margins that it usually takes to win a district. Global News reported that in the 2019 election some close district races had a margin of victory of 500 votes or less, with the Liberals winning the Yukon district by only 72 votes. Forty districts had a margin of victory of less than 2,000 votes, 14 of which were won by non-Liberal candidates in 2019. Trudeau only needs to gain 13 seats in the election to win a majority.

For example, if Liberal candidates were trailing by 2,000 votes in 40 districts, only 160,000 mail-in ballots would be needed to flip those districts to the Liberal candidates winning by 2,000 votes. Elections Canada believes there could be over 1 million mail-in ballots during this election. In the 2019 election there were 27,373,058 registered voters with 18,350,359 ballots cast, a 67 percent turnout. That indicates there will be a large pool of registered voters to draw from.

CTV News has reported: “Among the 10 ridings with the most special ballot kits [mail-in ballots] requested, five were decided in 2019 by fewer votes than the number of special ballots requested in 2021, meaning the voting outcome there could in theory hinge on that factor.”

Is it too far-fetched to believe an election steal could happen in Canada? Is Trudeau becoming more and more authoritarian? The current occupant of the U.S. White House is proof that it can happen. Stay tuned to the Trumpet for analysis on the election on September 20.

Also, read Great Again to understand the goals of the radical left and how that is fulfilling Bible prophecy.