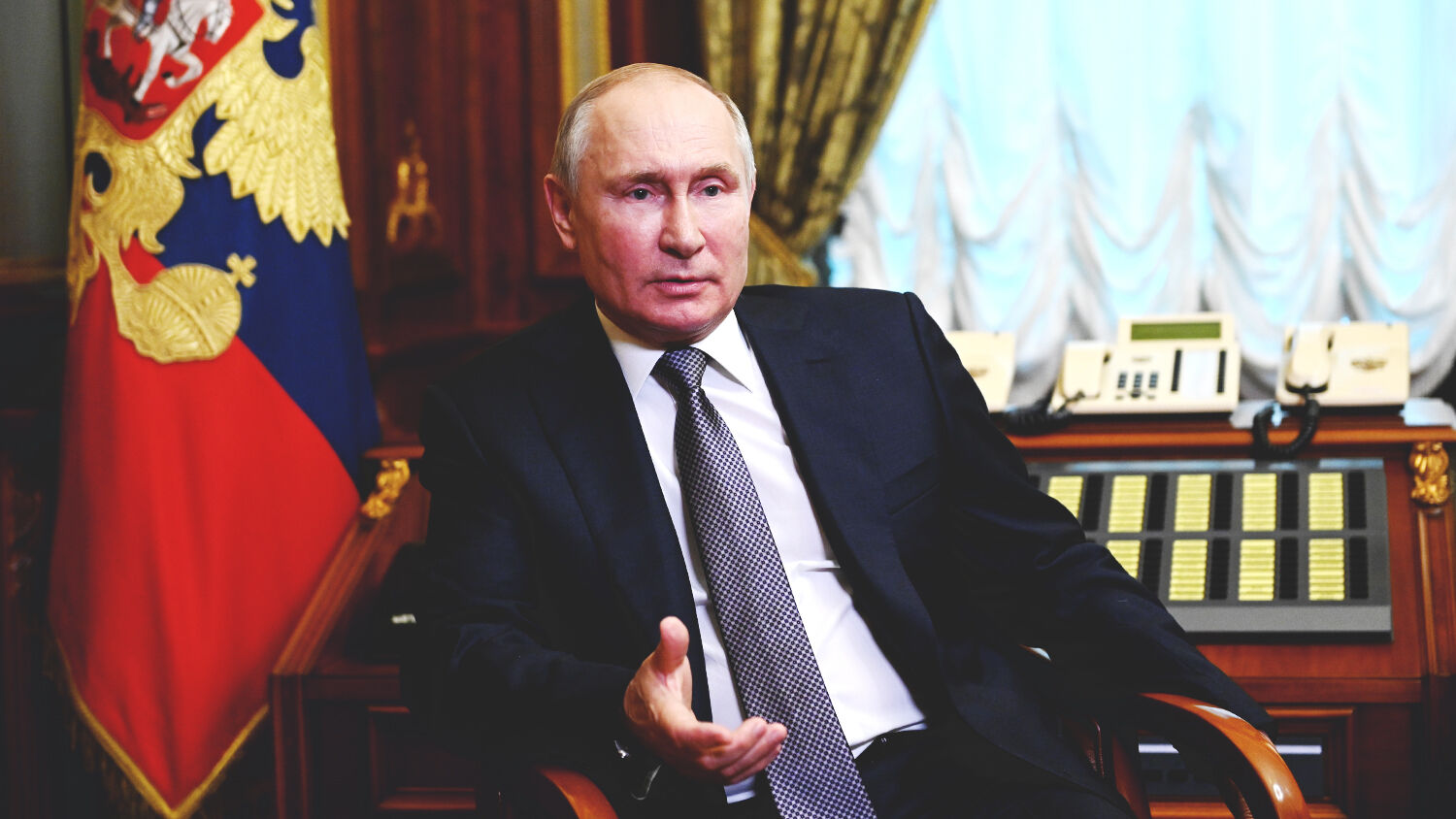 Russian President Vladimir Putin answers questions on July 13 about his article “On the Historical Unity of Russians and Ukrainians.”
Alexei Nikolsky/TASS/Getty Images

Russian president’s 5,000-word manifesto is a clear statement of intent.

“There is no such thing as a separate Ukrainian people,” asserted Russian President Vladimir Putin in a 5,000-word manifesto last month, which analysts view as a political declaration of intent regarding Ukraine. The manifesto came in response to a Ukrainian law passed on September 30 that states Kiev’s intent to protect Tatar, Karaite and Krymchak minority groups inside Ukraine.

However, the bulk of these peoples reside in the Crimean part of Ukraine, which Russia annexed in 2014 and claims sovereignty over. Therefore, Putin sees them as Russians. “They are one with the Russians,” he wrote, adding that the “state of Ukraine is an artificial creation” and a “fluke of history that should be grateful to Russia for allowing it to exist.”

Putin justifies his assertions by referencing what many analysts have called historical myths and conspiracy theories. But when false beliefs are held by a man as dangerous as Vladimir Putin, there is cause for concern. The Atlantic Council said Putin’s justification for his Ukraine obsession is a “deadly delusion” that the world cannot ignore.

To assess this rhetoric merely as a signal that Moscow is preparing to take a specific military action is to miss the scope of what the Russian president is trying to convey. Putin’s opus is nothing less than an act of moral and political divestment not just from contemporary Ukraine, but from the very possibility of Ukrainian statehood outside the Russian sphere of influence.

In other words, this isn’t just about taking back Ukraine. This isn’t about Putin taking one single action. It is a collection of steps, an inherent belief system informing all major decisions. This is about a burning desire to reverse what Putin famously called “the greatest geopolitical catastrophe of the 20th century.” And Ukraine is simply one of many moving parts.

This vision has been clear in Putin’s mind and in his policy from essentially the onset of his tenure. In 2004, he rigged the elections and tightened his grip on power; in 2008, he invaded Georgia; next came Crimea in 2014. And since then, thousands have died fighting over the Luhansk and Donetsk regions, while strategic partnerships have been reestablished with a host of former Soviet Union nations.

And just this spring, he positioned troops at the border with Crimea.

“I am confident that true sovereignty of Ukraine is possible only in partnership with Russia,” Putin wrote. “Together we have always been and will be many times stronger and more successful. For we are one people.”

“Putin is setting the stage for war,” warned Swedish economist Anders Aslund, an adviser to Putin’s predecessor, Boris Yeltsin. He believes that Putin’s 5,000-word manifesto is a statement of intent. It is a road map to the path ahead.

And Europe can see where that road leads.

After Russia redrew Ukraine’s borders by annexing Crimea in 2014, Romanian Foreign Minister Titus Corlatean told the Associated Press: “There is first of all fear … that there could be a possible contagion. Romania is extremely preoccupied.” This same sentiment was shared by nations across Eastern Europe. Russian belligerence terrifies Europe.

In his article “The Crimean Crisis Is Reshaping Europe,” Trumpet editor in chief Gerald Flurry wrote, “Ukrainians and Eastern Europeans have lived through brutal occupation. Their countries were pulverized during World War ii. They know what Russia can and will do—and they fear it in a way that is hard for us in the West to even imagine.”

Russian truculence is motivated by Putin’s desire to reverse the collapse of the Soviet Union. This is something the Bible brings out in great detail. (To learn more, read our article “Putin and the ‘Greatest Catastrophe.’”)

But the Bible also draws special attention to the fear that Russian aggression will cause in Europe. It says that Europe’s reaction to this aggression will bring about the fulfillment of a major prophecy.

We have been prophesying for around 70 years that Eastern Europe would become a vital part of a new European superpower—a resurrection of the Holy Roman Empire. This prophecy is directly related to the Crimean crisis! The fear you see in Europe because of events in Crimea is going to cause 10 leaders in Europe to unite in a sudden and dramatic way—and in precise accordance with the Bible’s description of that European empire! …

The reaction within Europe to this crisis is something you need to watch, because it is shaping and molding the future composition of the Holy Roman Empire! It is making European leaders move urgently to tie together this Holy Roman Empire that we have been prophesying about for so many years.

Putin is saying and doing what he wants. The American deterrent used to be strong. But the recent approval of the Nord Stream 2 pipeline shows that the U.S.’s will to check Putin is fading. The pipeline exposes Ukraine to Russian pressure tactics and could allow Russia to destabilize European economies.

Europe can no longer depend on America. And its nations know they can’t stand up to Russia separately. So as Russian bellicosity grows, the countries of Europe are going to “unite in a sudden and dramatic way” just as the Bible prophesies.

To fully understand the significance of these world events, read Mr. Flurry’s article “The Crimean Crisis Is Reshaping Europe,” where he discussed prophecies in Ezekiel 38, Daniel 2 and Revelation 17 about the Holy Roman Empire and how Europe’s fear of Russia will cause it to unite. If you want even more information, request our book The Holy Roman Empire in Prophecy, completely free of charge.