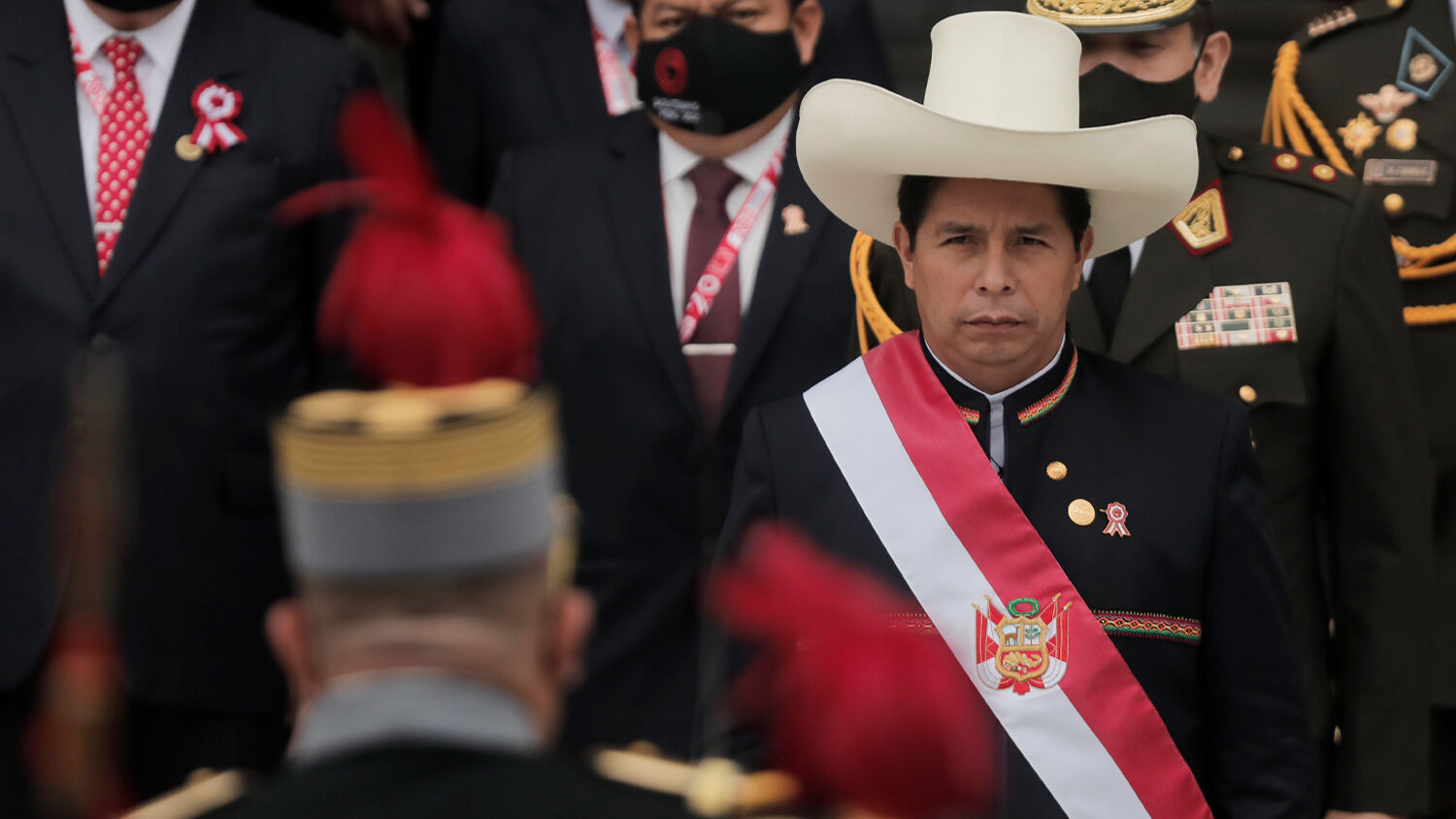 Peruvian President Pedro Castillo walks out of Congress wearing the presidential sash after his inauguration on July 28 in Lima, Peru.
Getty Images/Getty Images

A hard-line Marxist makes his way to Lima.

Pedro Castillo was declared president-elect of Peru on July 19; he took office July 28. Peru’s presidential elections were in June. But Castillo won by only about 40,000 votes—getting 50.1 percent of the vote. His opponent, Keiko Fujimori, claimed fraud. The vote was only recently certified in favor of Castillo.

This election was one of Peru’s tensest. Ms. Fujimori is the daughter of former Peruvian President Alberto Fujimori (1990–2000), a controversial figure who used death squads to hunt down far-left rebels. He is currently in prison for human rights violations. His daughter, who was recently in prison for money laundering, wants to give him a pardon. She also wants to continue her father’s legacy.

You would think, with an opponent like that, Castillo would win in a landslide. Why didn’t he?

Because Castillo is an avowed, hard-core Marxist.

Castillo comes from Cajamarca, Peru’s poorest region. He grew up in an illiterate family. He’s a former teacher and union activist who has never held a political office. He reported an income of $16,600 last year. He said that “this is the first time our country will be ruled by a peasant.”

What are Castillo’s plans for Peru?

He wants to make higher education taxpayer-funded. He plans on mass conscription of the unemployed into the army, which would be redirected to public works projects. He plans to introduce Peru’s indigenous languages into use in the government.

His party, Free Peru, is a Marxist-Leninist party. Its founder, Vladimir Cerrón, is serving a suspended sentence for corruption.

Here are some statements from the party’s “Ideology and Program” document:

Therefore, to call ourselves the left when we do not recognize ourselves as Marxists, Leninists or Mariateguists [Peruvian Communists], is simply to act in favor of the right with decorum of the highest hypocrisy. …

Lenin had great reason when he declared that true freedom of the press in a society is only possible when it is freed from the yoke of capital. Likewise, Fidel [Castro] stated: “The problem is not that they lie; the problem is how we tell the truths.” …

Presidents … Fidel Castro, Raúl Castro, Hugo Chávez, Nicolás Maduro [and] Daniel Ortega … were at the highest point of Latin American integration, based on sovereign principles, it was a group of presidents that brought dignity to the continent.

The Castro brothers, Chávez, Maduro and Ortega are not role models of committed democrats.

There is also some ambiguity about Castillo’s relationship with Shining Path, Peru’s Maoist rebel militia that terrorized the country for decades. In a statement to the online newspaper Inka Vision, Castillo apparently defended followers of the movement. “The country was a disaster; there were Peruvians who mistakenly took a path—are they Peruvians or not? What do you have against the senderistas [followers of Shining Path]?” he said. It is speculated that Castillo has more links to Shining Path than just sympathy, though he denies this.

Perhaps the most worrying sign of things to come is Castillo’s push for a new constitution. Rewriting the national constitution is how leftist dictators like Chávez consolidated power and formed dictatorships.

Peru’s Congress is currently controlled by more-moderate parties, making it less easy for Castillo to change the Constitution. His cabinet has a mix of ideological hard-liners and moderates. Some, like Finance Minister Pedro Francke (a former World Bank economist), were most likely picked to ease concerns that Castillo would turn Peru into a Communist state.

So why is Castillo so popular?

Peru’s economy had been growing for years. Embracing free-market economics, starting in the 1990s with Alberto Fujimori, was so successful it was called the “Peruvian miracle.” But the covid-19 crisis hit Peru especially hard. In June, the bbc reported that Peru had the “highest covid death rate as a proportion of population in the world.” The Peruvian unemployment rate doubled between 2019 and 2020, from 3.0 percent to 6.2 percent. As of June this year, the unemployment rate stood at 10.3 percent.

Many Peruvians were understandably frustrated at their government’s status quo. They wanted change. Pedro Castillo promised them change—radical change.

Although a Marxist, Castillo is also a strong social conservative. He is a Catholic and strongly opposes both abortion and same-sex “marriage.” So while he has a Marxist political worldview, his social and religious views aren’t much different from the values Peru has had since the Spanish conquest of the Incas centuries ago.

South America is generally overlooked when it comes to geopolitics. Many view what happens in South America as irrelevant to the rest of the world. But in a globalized world, the continent is becoming more and more relevant.

As of 2018, China was Peru’s largest export and import partner. With a far-left president, Peru may ally itself with China even more. Add this to all the other Latin American nations Russia, China and others are courting, and the result is an entire continent that is getting more and more hostile to the U.S.

What does this mean for the United States?

One of the reasons for the increasing interest in Latin America is its proximity to America. The U.S. is blessed when it comes to geography. The Pacific and Atlantic oceans separate it from most of its enemies. To the north is the friendly nation of Canada. The Rocky Mountains and the Arctic also form natural barriers.

If an enemy wanted to attack America, the easiest way to do so would be through the south—Latin America.

Here is what Trumpet contributors Andrew Miiller and Jeremiah Jacques wrote in the Trumpet’s March 2019 issue:

About 57 percent of U.S. seaborne exports flow out of the Mississippi Basin to international markets via the Gulf of Mexico and the Caribbean Sea. Cuba lies between Florida and the Yucatan Peninsula, an enormous gatehouse between the U.S. heartland and the outside world. …

The threat of a naval blockade against the Mississippi Basin is why the U.S. supported Cuba’s independence from Spain and took over the island as a protectorate upon winning the Spanish-American War in 1898. It is why the Soviets tried to use Cuba against the U.S., and why the U.S. tried to oust the Soviet Union from Cuba in 1962.

Now the U.S. is allowing Russia and China to forge alliances with Cuba, Nicaragua and Venezuela. This is setting the stage for a time when an alliance of hostile nations will finally lay siege to America and refuse to let shipments pass the gatehouse in either direction.

This is what makes the rise of leaders like Pedro Castillo in Latin America so concerning.

Correction: An earlier version of this article stated that Vladimir Cerrón was in prison. He was in fact given a suspended sentence. The Trumpet regrets the error.