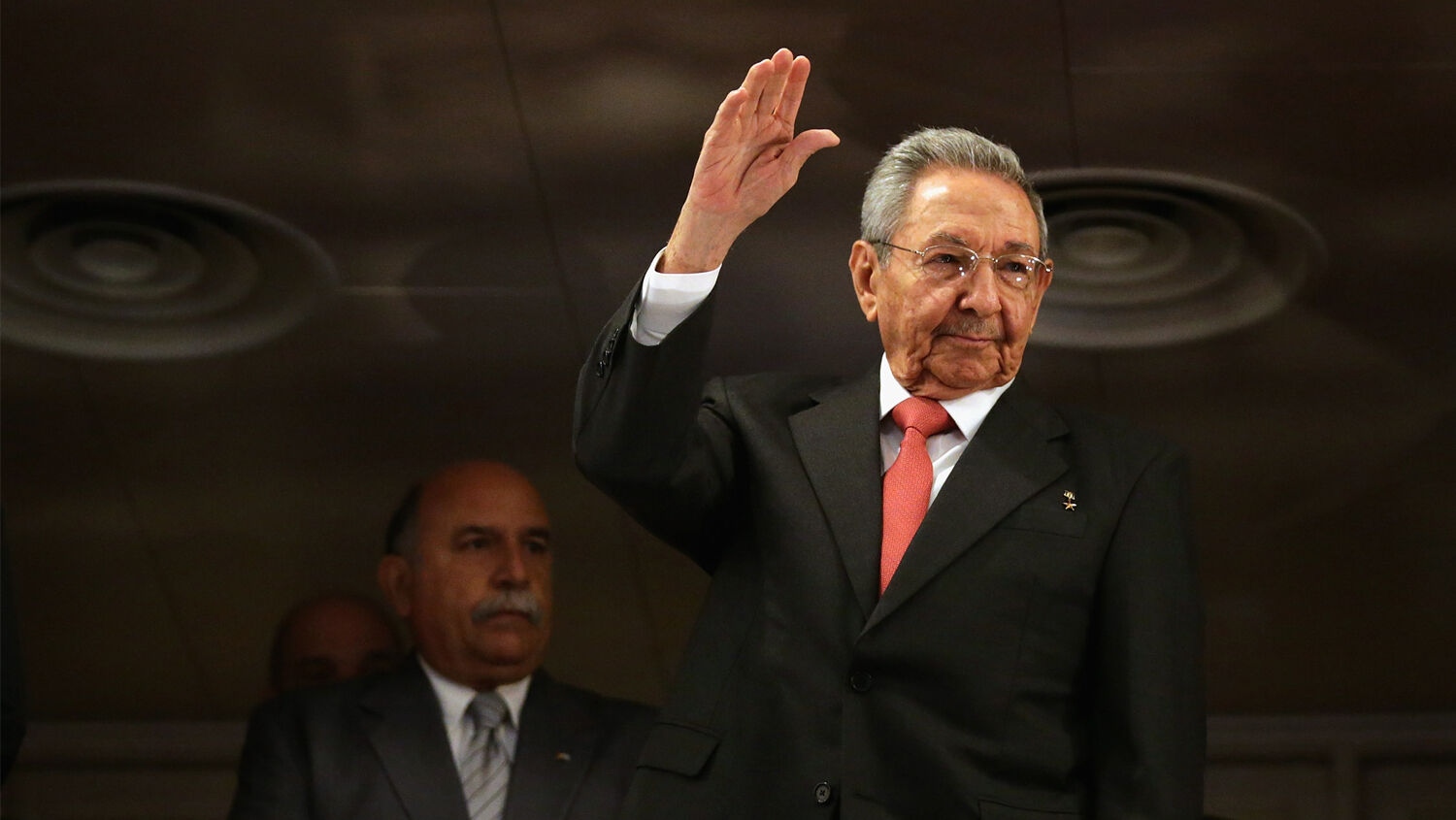 What Raúl Castro’s retirement means for the island country

Raúl Castro announced his retirement as first secretary of the Communist Party of Cuba on April 16. He formally handed the reins of government over to his protégé, Miguel Díaz-Canel, on April 19. Castro had been first secretary since 2011, when he took over from his elder brother, Fidel Castro. This is the first time Cuba hasn’t been ruled by a Castro since 1959.

Díaz-Canel is a longtime member of the Communist Party’s politburo who rose in the ranks to become Raúl Castro’s first vice president. Though Díaz-Canel was made the country’s president in 2018, Castro maintained the position of first secretary—the highest office in the country—until now.

What will the country look like without a Castro at the helm?

Before we can understand where Cuba’s future lies, we must look at Cuba’s past.

The origins of modern Cuban history begin in 1898. That is when the United States defeated Spain in the Spanish-American War. In the settlement of the war, America gained Puerto Rico, the Philippines and Guam as territories. Cuba was to be nominally independent. But America reserved the right to intervene in Cuban domestic and foreign policy matters, which it did several times. This culminated in Washington recognizing former President Fulgencio Batista’s coup against the government in 1952.

Batista ruled as a dictator. He embezzled large sums of money and rigged Cuba’s “elections.” Despite Batista’s corruption, life in Cuba was pretty good, especially compared to the rest of Latin America. Cuba had the fifth-highest per capita income and third-highest life expectancy in the Western Hemisphere. It also was second in the Western Hemisphere’s per capita vehicle ownership and highest number of television sets per inhabitant. Cuba spent proportionally more on education than did the United States and had more doctors per 1,000 people than did the United Kingdom. It had the lowest infant-mortality rate in Latin America.

Of course, Cuba had its societal problems. Many Cubans were stuck in poverty; racial segregation was mainstream. But it was far from a dystopian failed state.

Fidel Castro, Raúl Castro, Che Guevara and other socialists overthrew Batista’s regime and took over the government. After settling into power, they turned Cuba into a Communist state. Practically all business and agriculture were nationalized. Wages and employment levels were set by the government. Food and other goods were rationed. The government confiscated most people’s savings. Following the model of the Soviet Union, Cuba became the first Communist country of the Western Hemisphere.

What are the fruits of that transformation?

Since the revolution, Cuba’s gross domestic product per capita has risen at an average of only 1 percent per year. Two million people have left the country. Despite having very fertile soil, the country has to import two thirds of its food. To keep the economy functioning, Havana had to rely on generous subsidies from the Soviet Union. With the collapse of the ussr in the 1990s, Cuba’s economy shrank by a third. It then had to turn to the new socialist government in Venezuela for financial support.

With the Venezuelan economy currently in shambles, this is ending as well. The Cuban intelligence services was modeled after the Soviet kgb and trained by the notorious East German Stasi. Legal emigration was heavily restricted, though that was changed after Fidel Castro retired. All political parties, other than the Communist Party, are banned. Religious minorities are heavily monitored. World War iii almost started because of the Cuban Missile Crisis. Castro’s daughter even defected to the United States as an anti-Communist activist.

This is the legacy of Fidel Castro’s Cuba.

As the 21st century progressed and other Communist countries, like China and Vietnam, were implementing market economies to adapt to the times, Cuba was stuck in a time warp with its Soviet-era economic policies. Havana wanted to pretend that the Berlin Wall never came down. And it was waking up from that dream far too late.

Jeffrey Goldberg, a reporter from the Atlantic, had an opportunity to interview Fidel Castro in 2010. Goldberg asked if Castro believed that the Cuban model of society was still worth exporting to the rest of the world. Castro said that “the Cuban model doesn’t even work for us anymore.”

Goldberg’s assistant and Cuba expert Julia Sweig interpreted the statement to mean that the system merely needed some tweaking. That may have been to save face and get Goldberg out of trouble; Goldberg admits that he brought Sweig over to “make sure … I didn’t say anything too stupid.”

Castro, in declining health, resigned as first secretary in 2011. He handed the reins of government to his younger brother Raúl, who had been the number two man in government for decades. Fidel died in 2016.

Raúl Castro was more open to changing the system. He approved limited experimentation with private enterprise and allowed expat Cubans to return to the country for short visits without retribution. But Raúl Castro remained a committed socialist. The economy remained centralized and the Communist Party the only legal political party.

2014 was the pivotal year for Cuba in modern times.

After 18 months of secret negotiations mediated by the Vatican, Raul Castro and U.S. President Barack Obama announced that Washington and Havana would normalize relations. This would be the first time the two countries would have normal relations since 1961.

The embargo was removed in all but name. America and Cuba exchanged embassies and Obama visited Cuba in 2016. Investment and travel restrictions were heavily loosened. Americans could now visit Cuba as tourists and bring American dollars with them. Some suspect, given Cuba’s economic situation at the time, a continued hard embargo would have caused the Castro regime to collapse.

But while Communist Cuba was experiencing a revitalization, Raúl Castro wasn’t. Now in his 80s, he made preparations for his retirement. His replacement was his protégé: Miguel Díaz-Canel.

Not much is known about Díaz-Canel. Unlike some other Cuban figures, he has managed to stay out of the spotlight for most of his political career. He was born in 1960, the year after the revolution. All he’s ever known is the Communist system. He was seen as a rising star in Havana. Ever since becoming a more high-profile politician, Díaz-Canel has tried to brand his image as a reformist. During fuel shortages in Cuba, he rode his bike to work. When demonstrators were protesting against a homosexual club, he came to the club’s defense. He’s an advocate for giving Cubans easy access to the Internet, something Cuba has lagged behind the rest of the world in. In short, he’s portraying himself as a man of the people. And at 61, he’s a much younger face for Cuba compared to the Castros.

Yet he is an ardent socialist and has no intentions of abandoning Cuba’s current system. In a leaked video, he claimed that Cuba had no obligations to commit to the terms of its deal with President Obama. He was stationed in Nicaragua in the 1980s to help support the socialist regime there. Cuba, under his presidency (and Raúl Castro’s term as first secretary), became observer members of Russia’s Eurasian Economic Union, even though Cuba is nowhere near Eurasia.

Guillermo Fariñas, a famous Cuban dissident, said that Díaz-Canel “was very active, very militant and very unconditional in his loyalty to the regime.” The New York Times called him “a relentless defender of the revolution and the principles and politics it brought.”

And it is important to remember that, while Raúl Castro is retired, he’s not going away. He will still be very influential in Havana, saying, “As long as I live I will be ready with my foot in the stirrups to defend the fatherland, the revolution and socialism.” If Díaz-Canel takes Cuba too far away from the founding principles of the revolution, Castro could intervene. But an about-face on socialism is unlikely. Castro wouldn’t have chosen somebody he doesn’t trust to replace him. And Castro in his retirement speech condemned too-drastic economic reforms in the private sector that would bring the “very destruction of socialism and the end of national sovereignty.”

So what can we expect now that Miguel Díaz-Canel is first secretary?

We can expect him to take a similar approach to Raúl Castro: a limited opening up of the economy to keep Cuba afloat, all the while keeping the Communist system more or less intact. But rather than an old-guard revolutionary at the helm, we can see a younger man of the people portraying himself as open to new ideas.

In other words, we can expect Díaz-Canel to take Cuba down the route Russian President Vladimir Putin took his country: an iron-fisted regime with a facade of freedom and prosperity.

But with Díaz-Canel’s reformist image, we could see countries in the West more eager to warm ties with Cuba.

What would this mean for America?

Trumpet editor in chief Gerald Flurry was very critical of the Cuba deal signed by Mr. Obama. He writes in his free booklet Great Again:

Will this reengagement change the nature of the Cuban regime? Cuba remains a terrorist-sponsoring nation to this day. In those diplomatic negotiations, Cuba made no concessions. It got everything it wanted from its enemy, the U.S., and gave nothing.

Cuba has a recent history with Russia in designing a nuclear attack against America. Couldn’t Cuba join with another world power to complete that design?

Cuba remains no friend of the United States. The island’s proximity to the American mainland makes it a useful ally for a foreign power planning to lay siege on America. With somebody like Miguel Díaz-Canel giving Cuba a new image, Washington might see Havana—and its foreign partners—as more innocuous. It might not see the danger from Cuba until it is too late.

To learn more, request your free copy of Great Again.