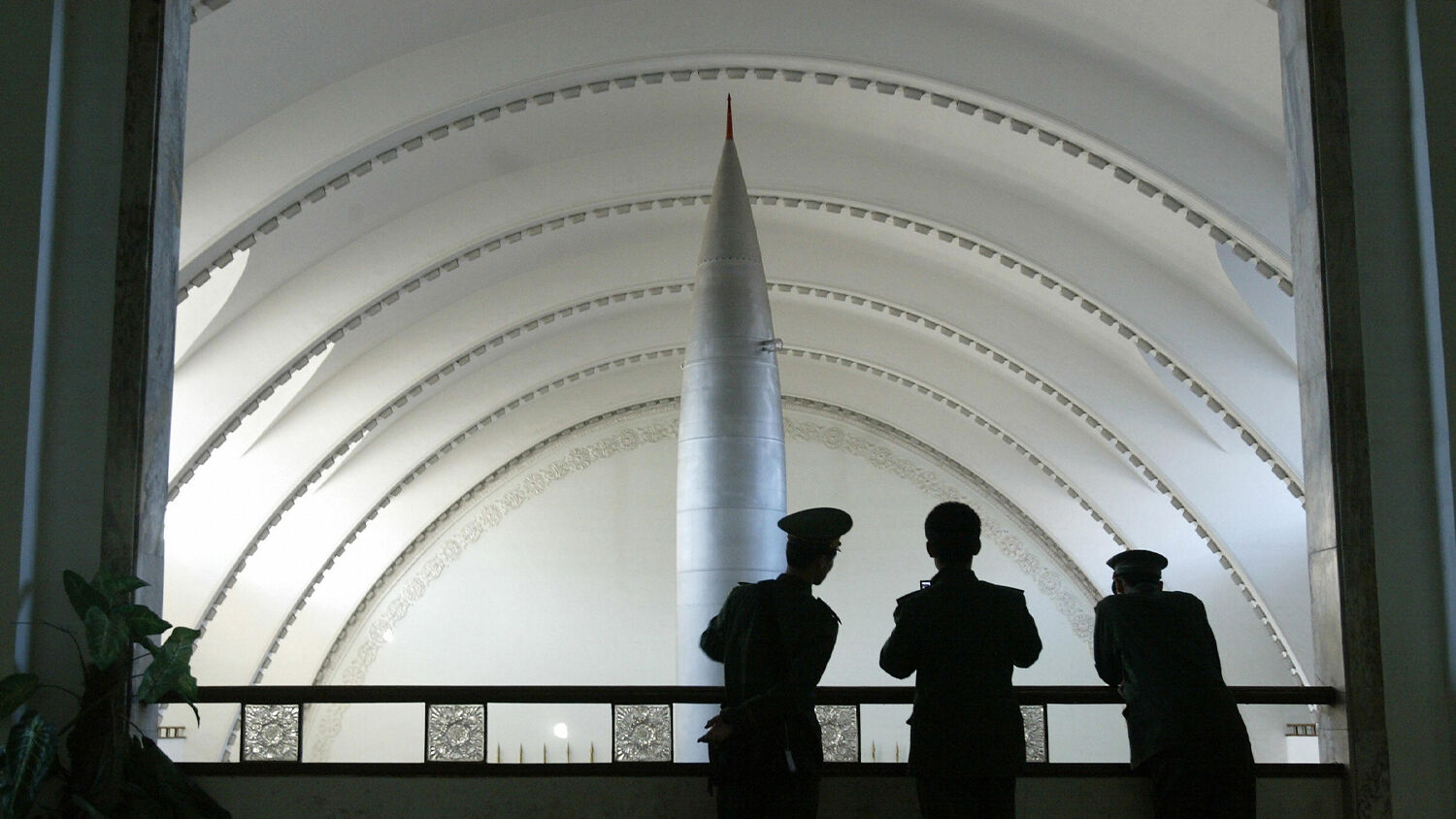 Xi Jinping’s expansion of Chinese nuclear firepower appears to be happening at a breakneck pace.

China is building a new nuclear silo field near the city of Hami in Eastern Xinjiang, according to a report by the Federation of American Scientists published on July 26. The field is the second discovered by specialists examining satellite images of China in recent weeks, indicating that Beijing is rapidly altering its nuclear posture and expanding its firepower.

For decades following China’s first successful nuclear weapons test in 1964, the nation pursued a strategy of “minimum deterrent.” It developed an arsenal just large enough to deter other nuclear powers from attacking. Experts believe the Chinese maintained between 200 and 300 weapons during this time and had only 20 operational silos for liquid-fuel intercontinental ballistic missiles (icbms).

But under Chinese leader Xi Jinping, this strategy is now changing. Earlier this month, satellite imagery revealed that his forces are now building around 120 new silos near the northwestern city of Yumen and another 25 at other locations across the country.

And the new field in Hami discovered this week has another 110 silos under construction.

Once the building at all locations is complete, China will have some 250 nuclear icbm silos in operation—more than 12 times its current number.

The number of warheads on Chinese icbms could potentially increase to somewhere between 415 and 875, depending on which type of missiles are loaded into the silos.

“The silo construction at Yumen and Hami constitutes the most significant expansion of the Chinese nuclear arsenal ever,” Matt Korda and Hans M. Kristensen wrote in an analysis of the new silo fields.

I found China’s 2nd nuclear silo field, in Eastern Xinjiang.@nukestrat + I estimate that it could eventually house 110 silos.

Korda and Kristensen point out that the number of new Chinese silos in progress is greater than the number of silo-based icbms operated by the Russian Federation. And it constitutes more than half of the size of America’s entire icbm arsenal. “The Chinese missile silo program constitutes the most extensive silo construction since the U.S. and Soviet missile silo construction during the Cold War,” they wrote.

“We believe China is expanding its nuclear forces in part to maintain a deterrent that can survive a U.S. first strike in sufficient numbers to defeat U.S. missile defenses,” Jeffrey Lewis, a nuclear weapons expert at the Middlebury Institute of International Studies, told the Washington Post.

Analysts are unsure whether China plans to load all of the new silos with nuclear missiles or if a number of them will serve as empty decoys, with missiles being routinely rotated into different silos to keep opponents unsure of their exact locations. In the event of war, this “shell game” would force an enemy nation to expend considerable resources as it guessed which of the silos housed a missile.

Vipin Narang, a Massachusetts Institute of Technology professor who focuses on nuclear policy, told the New York Times that China’s new silo fields give the nation “many options.”

“They make the United States target a lot of silos that may be empty,” he said. “They can fill these silos slowly if they need to build up their force. And they get leverage in arms control.”

Alongside the silos, the People’s Liberation Army Rocket Force also operates some 100 road-mobile icbm launchers, based at more than a dozen military hubs. And all six of China’s Type 094 Jin-class submarines are armed with up to 12 ballistic missiles that can be tipped with nuclear warheads. The country is also developing a new nuclear-capable subsonic strategic stealth bomber, the Xian H-20, which could rival the United States’ B-2 bomber.

Xi Jinping’s expansion of Chinese nuclear firepower appears to be happening at a breakneck pace. It is occurring at the same time that Russia’s nuclear missiles are becoming impossible to stop, the jihadists ruling Iran are racing toward nuclear arms, and North Korea’s rogue regime is making leaps in nuclear delivery systems. Meanwhile, German soldiers are receiving more and more training on how to use the nuclear bombs that America has stocked in Germany. And worries are intensifying over the vulnerability of Pakistan’s nuclear weapons to terrorist hijacking, particularly as the U.S. withdraws from neighboring Afghanistan.

These trends expose the failure of the United Nations and other organizations to end the global nuclear threat. None of the disarmament efforts, peace plans or treaties have been able to secure lasting peace. And there is no true cause for hope in them.

In his booklet Nuclear Armageddon Is ‘At the Door,’ Trumpet editor in chief Gerald Flurry writes: “Only God can solve our number one problem: that of human survival.”

Mr. Flurry’s booklet makes plain that God’s plan spelled out in the Bible gives humanity a sure, hope-filled solution. But it shows that the Bible also warns that trends in China and elsewhere will eventually explode into nuclear war.

Matthew 24:21-22 record Jesus Christ saying: “For there will be greater anguish than at any time since the world began. And it will never be so great again. In fact, unless that time of calamity is shortened, not a single person will survive” (New Living Translation).

When Christ spoke these words in the year a.d. 31, a war that could potentially end all human life was not technologically possible. It took almost 2,000 years before that prophetic milestone was crossed. The Ambassador College Bible Correspondence Course, published by the late educator Herbert W. Armstrong, explained: “Total annihilation of the human race by warfare was never possible—at any time in world history—until 1955! The Encyclopedia Britannica reports, ‘In August 1955 … there was a general conviction among the governments that both sides in the Cold War had sufficient retaliatory power to make hydrogen bomb war suicidal’!”

So beginning in 1955, enough nuclear bombs had been built to erase all human life from the planet. The kind of war Christ had cautioned about 2,000 years earlier had become not just possible—but treacherously probable.

Today, the countries continue to hold each other at nuclear gunpoint—and the perils of these weapons being used are increasing. When a worldwide nuclear war explodes, millions of people will suffer nuclear fire, and millions more will suffer nuclear winter. Jeremiah 2:15 shows that some cities will be entirely burned by nuclear devastation, without a single survivor. The mayhem will threaten the survival of humankind.

But the Bible’s prophecies do not end with nuclear war obliterating humanity. Continuing in Matthew 24, immediately after Jesus said nuclear war in the modern age would be so destructive that it could wipe out mankind, He added an important detail: “[T]hose days shall be shortened” (verse 22).

From this it is plain that nuclear World War iii will erupt, but God will not let it run its course. Before China and other global powers detonate enough weapons to annihilate man, Jesus Christ will interrupt the carnage.

“The good news is God will shorten the time span and save us alive,” Mr. Flurry writes. “But if He did not intervene, there wouldn’t be anyone alive on this planet. He will let it go a long way so that people learn they can’t rule themselves. Men don’t know the way of peace. God knows—and if you keep His law of love, it will bring great joy and peace into your life” (op cit).

Following the time of unprecedented war, Christ will establish a golden age of unprecedented peace. All will be taught to detest violence and love God’s way, and the “great joy and peace” that Mr. Flurry discusses will start to fill the whole world.

“We are now at the edge of this nuclear abyss!” Mr. Flurry writes. But as all these “horrible signs come to pass, we know Christ is about to return.”

These are crucial truths to comprehend: both the warning of war in the future and the good news about the hope that lies just beyond it. But it is possible to understand and to learn how to begin bringing that “great joy and peace” into your life today. Order your free copy of Nuclear Armageddon Is ‘At the Door.’