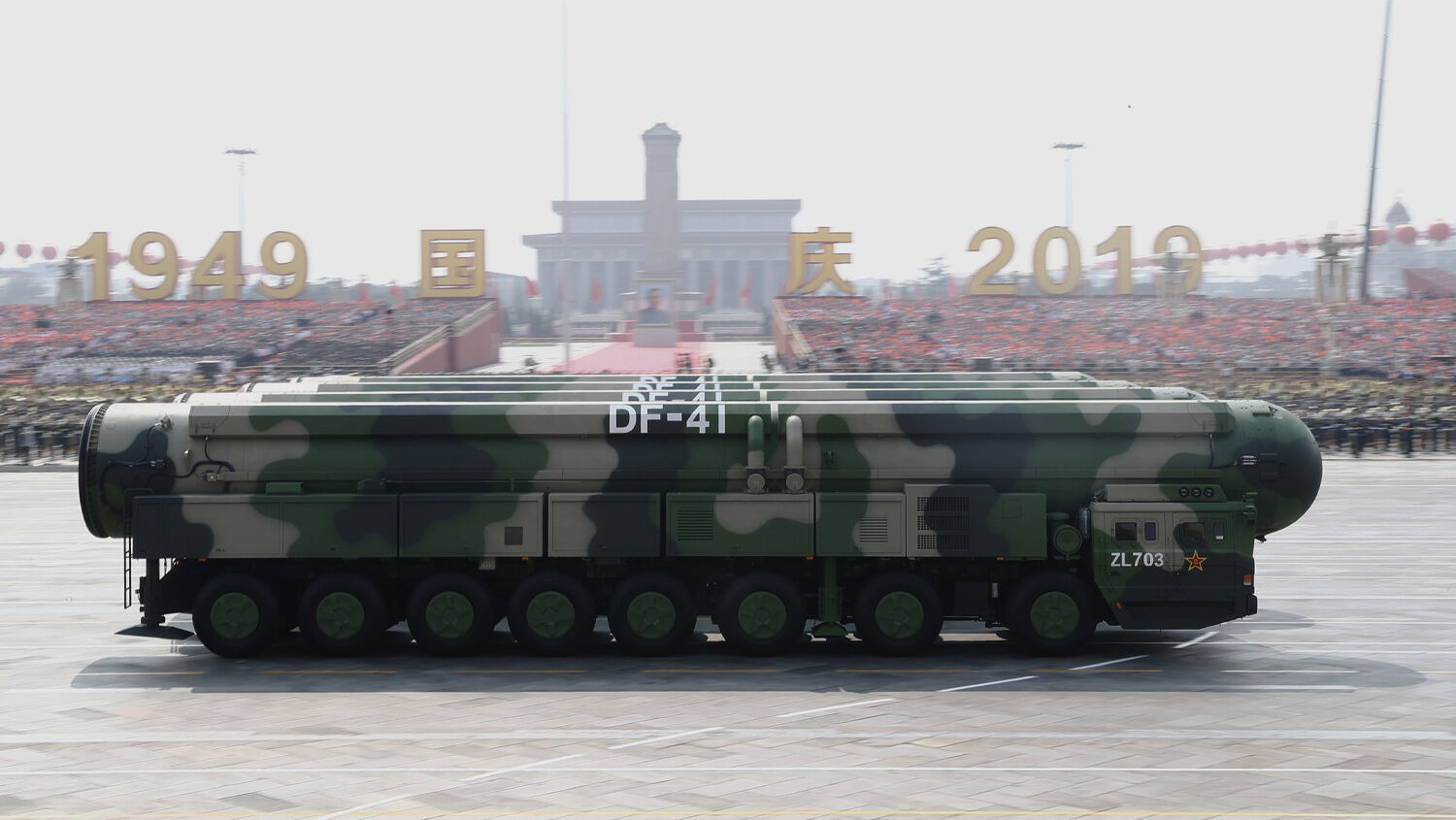 Dongfeng-41 intercontinental strategic nuclear missiles are reviewed in a military parade celebrating the 70th founding anniversary of the People’s Republic of China in Beijing, capital of China, Oct. 1, 2019.
Xinhua/Liu Bin via Getty Images

China’s rapid nuclear proliferation is part of a trend that is setting the Earth on a dangerous path.

China is constructing 119 new silos for intercontinental ballistic missiles close to the northwestern city of Yumen, in a move that significantly bolsters the Asian giant as a nuclear threat, according to commercial satellite images published by the James Martin Center for Nonproliferation Studies in Monterey, California, on July 2.

Compared to the United States and Russia, the world’s two nuclear behemoths that possess a combined 11,000 nuclear weapons, China’s stockpile of 250 to 350 weapons is relatively modest. However, this building spree could signal hazardous intent.

According to Jeffrey Lewis, an expert on China’s nuclear arsenal, the silos near Yumen are likely intended for China’s DF-41 intercontinental ballistic missiles (icbms). With a range of up to 9,300 miles, these would be able to deliver Chinese nuclear weapons to the American mainland. And Lewis believes that this threat greatly bolsters the credibility of China’s nuclear deterrent.

“If the silos under construction at other sites across China are added to the count, the total comes to about 145 silos under construction,” Lewis told the Washington Post. “We believe China is expanding its nuclear forces in part to maintain a deterrent that can survive a U.S. first strike in sufficient numbers to defeat U.S. missile defenses.”

Pentagon officials have been sounding louder and louder alarms about China’s rapid nuclear advancement for months. And its arsenal has been growing to include mobile and stealthy icbms, as well as nuclear-capable submarines.

In April, commander of the U.S. Strategic Command, Navy Adm. Charles Richard, called China’s “breathtaking expansion” a threat to U.S. security. Although America has had to worry about deterring Russia for years, that task was somewhat manageable. Now it must deter an increasingly active China as well, which happens to be a close Russian ally.

With its modest military stockpile, China has little hope of catching up to the U.S. or Russia. But it is embracing a “limited deterrence” doctrine. China is developing a small but survivable nuclear force that would allow it to retaliate in the event of an attack.

This desire is furthering a trend—nuclear proliferation—that is setting the Earth on a dangerous path. Nuclear weapons present the possibility of the erasure of all life on Earth.

Take India and Pakistan, for example. With around 300 nuclear bombs, they control less than 2 percent of the world’s nuclear stockpile. But the global ramifications of a nuclear war between them could possibly devastate the entire planet.

A single nuclear bomb detonated in a major city would kill hundreds of thousands in minutes and potentially millions in the following days, weeks, months and years. India and Pakistan’s 300 bombs would do so much more than that. They would produce tons of smoke that would rise above the clouds, blocking sunlight and warmth. Global temperatures would drop, precipitation would decline, and agriculture would be compromised.

According to Rutgers environmental sciences professor Alan Robock, such a conflict could “produce so much smoke that temperatures would fall below those of the Little Ice Age of the 14th to 19th centuries, shortening the growing season around the world and threatening the global food supply.”

Those who survived the nuclear battle would contend with widespread famine, the rising costs for the food and water that remained, and inevitably more conflict for the scarce resources. Billions could ultimately die.

Now imagine that scenario on a worldwide scale, with all nuclear powers detonating their weapons. It wouldn’t matter how many more nuclear bombs America has than China.

In World War ii, two atomic bombs assured victory for the Allies. In an all-out nuclear war, the entire world would lose. Such cosmocide has been possible for decades; so far the crisis has been averted. But China’s push for a stronger nuclear deterrent shows that the threat is far from passed. In fact, global nuclear war is increasingly probable.

That is a frightening scenario. And it is one that Jesus Christ specifically prophesied about: “For then shall be great tribulation, such as was not since the beginning of the world to this time, no, nor ever shall be. And except those days should be shortened, there should no flesh be saved: but for the elect’s sake those days shall be shortened” (Matthew 24:21-22).

Trumpet editor in chief Gerald Flurry comments on this scripture in his booklet Nuclear Armageddon Is ‘At the Door’:

This is all tied to the Great Tribulation ….

How many Christian leaders do you hear even discuss Matthew 24? It is the most important prophetic message Christ gave when He was on this Earth! They talk about the person of Christ continually—but not His message. …

Clearly the main concern is not about which nation has the most nuclear bombs or launching silos. It is all about human survival. And nobody would survive were it not for Christ’s return. Faith in superior military might is misplaced. It won’t bring deliverance and it certainly won’t bring peace. But the Bible tells us where to place our faith. It shows the only reason the human race will survive—because of the return of Jesus Christ.

To fully understand these prophecies, and to learn where to place your faith, request your free copy of Nuclear Armageddon Is ‘At the Door,’ by Gerald Flurry. Study it alongside your Bible and prove the truth for yourself.