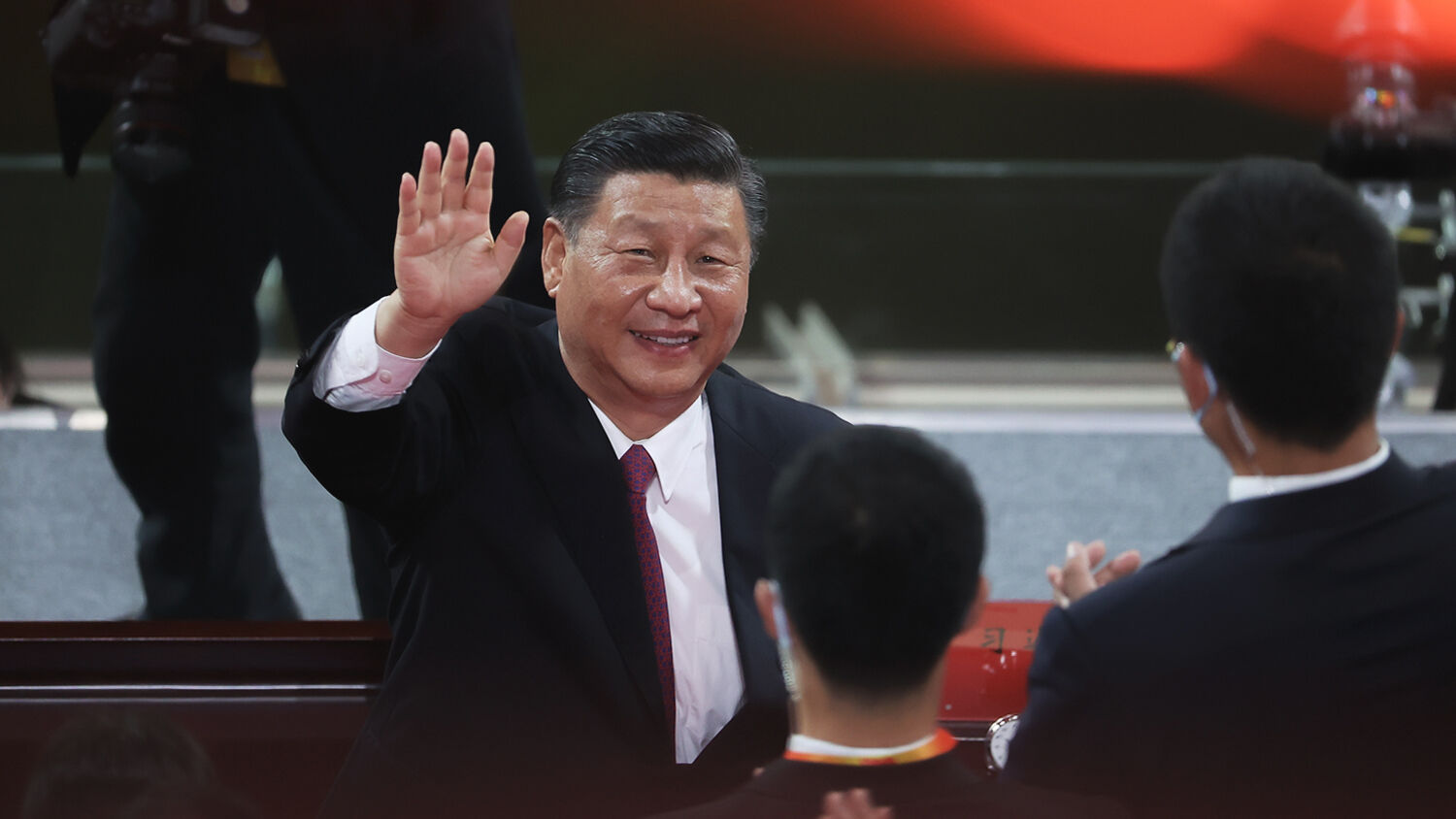 Chinese President Xi Jinping attends the art performance celebrating the 100th anniversary of the founding of the Communist Party of China on June 28 in Beijing.
Lintao Zhang/Getty Images

A look back on a century of Chinese communism

The Chinese government celebrated the 100th anniversary of the founding of the Chinese Communist Party (ccp) today. Mao Zedong picked July 1, since the actual founding date is unknown. The ccp has been publicizing this year’s anniversary for some time now. Exhibits devoted to Communist history were set up around Beijing. In the city of Yan’an, a developer set up a Communist Party theme park for the occasion.

Chinese President Xi Jinping gave a televised address to commemorate the event. His speech wasn’t just about glorying China’s Communist heritage. There was also fiery rhetoric of China’s current place in the world aimed at Beijing’s rivals. “We will not accept sanctimonious preaching from those who feel they have the right to lecture us,” said Xi. “We have never bullied, oppressed or subjugated the people of any other country, and we never will.” This was probably a reference to Western nations sanctioning China for its abuse of Xinjiang Uyghurs.

Xi continued: “By the same token we will never allow anyone to bully, oppress or subjugate us. Anyone who tries will find them on a collision course with a steel wall forged by 1.4 billion people.”

China is the world’s second-largest economy. It has the world’s largest population and the world’s largest army. It recently became the third country ever to land a rover on Mars. China has marched a long way in 100 years. But as in anywhere communism has been established, the legacy of the ccp is far from rosy.

Is the ccp’s 100th anniversary worth celebrating?

The Chinese Communist Party was founded in 1921 in Shanghai. At the time, China was still reeling from the collapse of the last imperial dynasty and the competition between various warlords. It initially formed an alliance with the nationalist Kuomintang party. The alliance broke apart in 1927 after the Kuomintang began purging Communists. Civil war began, forcing Mao Zedong’s Communists to begin a “long march” into the Chinese interior to escape the Kuomintang.

The Japanese invasion and World War ii forced the nationalists and Communists to reconcile. But once Japan had surrendered, the civil war restarted. The Chinese Civil War of 1945–1949 was devastating. There are varying estimates on how many people were killed. The government’s official record lists 1.5 million dead and wounded Communist fighters. According to Encyclopedia Britannica, about 600,000 Kuomintang troops were killed and about 5 million Chinese civilians died through combat and other causes.

Losing the war, nationalist leader Chiang Kai-shek fled to the newly liberated former Japanese colony of Taiwan. In 1949, Mao declared the establishment of the People’s Republic of China. Since then, the ccp has governed China as a one-party, totalitarian state.

One of the first actions of the new Communist regime was to support North Korea during the Korean War. In 1950, North Korea’s Kim Il-Sung caught South Korea unprepared for war and invaded, hoping to communize all of Korea. The United States and the United Nations intervened on behalf of South Korea. They might have been able to defeat Kim Il Sung if it weren’t for Chinese involvement. Mao’s troops invaded and pushed the Western forces back. Because of China, North Koreans to this day live in a backward, oppressive dictatorship.

Mao’s vision of communism was different from the Soviet view in several ways. “Normal” communism focused on the urban, industrial working class. China was predominantly a rural, agrarian-based society. Mao needed an economic program that would artificially change China directly from an economy based on agriculture to one based on heavy industry. His plan, termed “the Great Leap Forward,” called for the government to confiscate all farmable land and force countryside-dwellers onto communes. On the communes, the laborers were pressured to maximize crop yields as much as possible to feed a growing industrial class. All the while, the uneducated farmers were forced to use any metal they could find—even cookware—to forge their own steel for export. Most of the steel was unusable.

Poor agricultural management (plus a campaign to eradicate seed-eating—and pest-eating—sparrows) led to a man-made famine. Many officials saw the disastrous results of these policies. But criticizing or disobeying Mao meant execution. So they kept their mouths shut. At least 36 million people died in what was the largest mass famine in history. The Great Leap Forward lasted from 1958 to 1962.

The next transformative event in China’s history was the Cultural Revolution. With the post-Stalin reforms in the Soviet Union, Mao thought Russia was abandoning the purist ideals of communism. In order to stop China from following the same path, he decided it should be purged from “capitalist” and otherwise pre-Communist influence. To purge Chinese society from, real or perceived, enemies of the revolution, Mao organized “Red Guards.”

The Red Guards were paramilitary groups of students (ages 14 to 21, mixed gender) used to hunt out potential opponents of communism. Teachers and other intellectuals were especially big targets. The brutality of the Red Guards was horrendous. Burying people alive, cannibalism and other atrocities were commonplace. As individual Red Guards became more powerful, they started to turn on each other, competing for influence. The Cultural Revolution started in 1966. By 1976, the year of Mao’s death, 1 million to 2 million people had been killed.

After Mao’s death, things started to calm down in Beijing. Under the more level-headed rule of Deng Xiaoping, China began to be ruled more by consensus. Mao’s legacy was deemphasized, and the Chinese government was less ideologically rigid. It looked like China, like Mikhail Gorbachev’s Soviet Union, would take a more liberal path.

European communism was crumbling. Protesters challenged Communist regimes in Poland, East Germany and even the Soviet Union. Chinese students were hopeful that something similar could happen in China. Mass protests gathered in Beijing’s Tiananmen Square calling for democracy. Deng would have none of that. On the night of June 30, he sent the People’s Liberation Army (pla) to crack down on the protesters. Soldiers opened fire while tanks ran over people. Democracy wasn’t coming to China.

The 1990s and 2000s were years of great transformation in China. The country transitioned from a planned economy to a market economy. Relations with the West opened up. The Chinese economy boomed, leading it to become, now, the second-largest in the world.

This leads us to modern times. What is Chinese communism like today?

In one sense, it isn’t really Communist anymore. Private property and enterprise are now the norm. Western businesses have stores and factories all over China.

Yet the iron-fisted security apparatus is alive and well. China has one of the worst track records for persecuting journalists. It is committing genocide against the Uyghur minority in the Xinjiang province. The People’s Liberation Army constantly makes threats to invade Taiwan.

The Chinese Communist Party was, and is, in the words of President Xi, a “steel wall,” a very bloody steel wall.

The Bible prophesies that the Chinese Communist Party’s shedding of blood, however, is just getting started.

We at the Trumpet often write about an end-time power bloc called the “kings of the east.” We get that name from Revelation 16:12. There, it specifies that the kings would be east of the Euphrates River. Revelation 9:16 says that these kings will field an army of 200 million soldiers.

Only the giants of Asia have the populations to sustain an army of that size. And China has the biggest population of them all. And the largest military.

Revelation states that these kings will be involved in an epic battle. Revelation 14:20 states that there will be so much bloodshed in this battle that the blood will pool up to the horses’ bridles.

To learn more, please request our free booklet Russia and China in Prophecy.