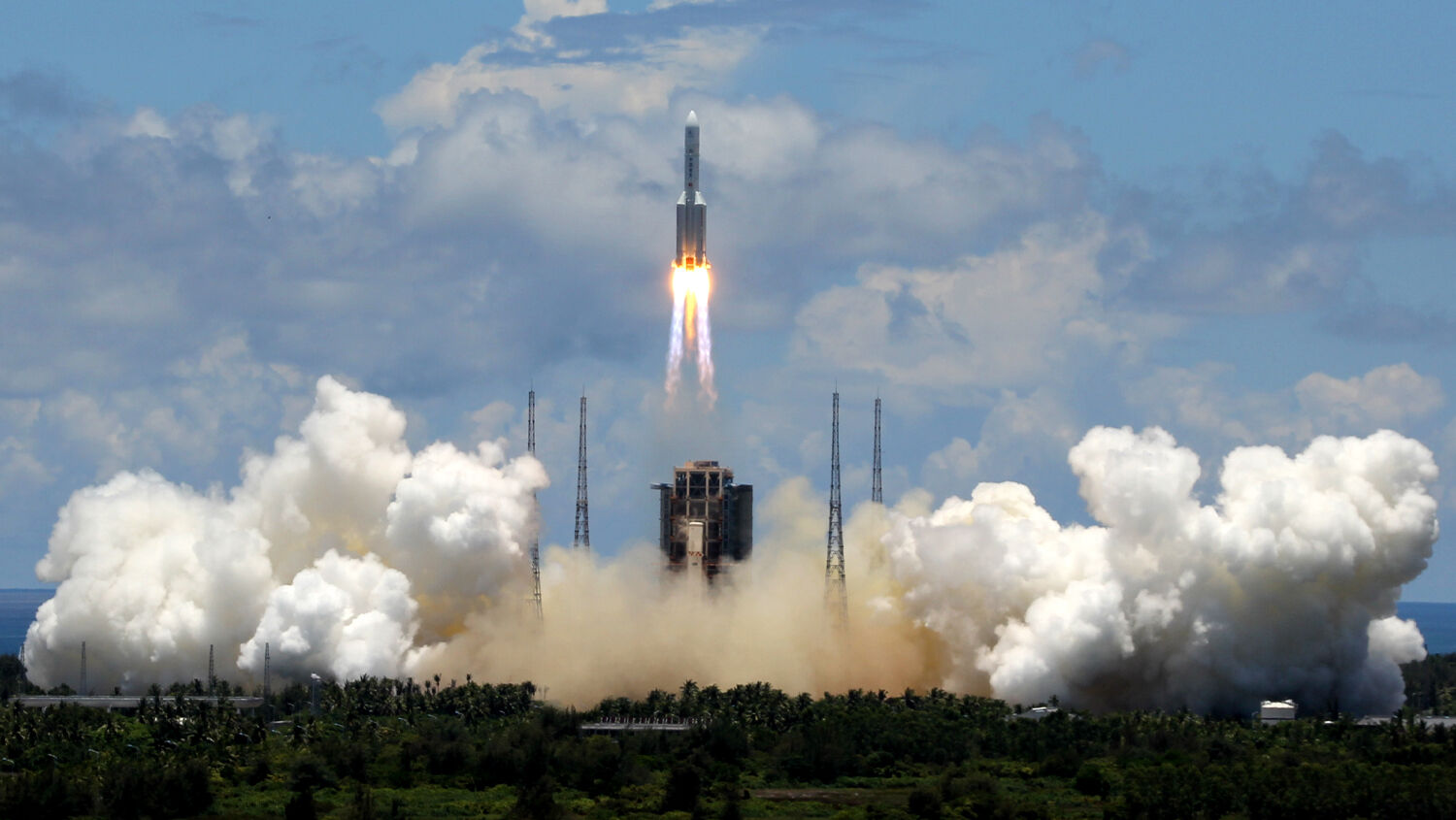 China recently completed two massive achievements in outer space exploration. The first was landing a rover on Mars. This makes China only the third nation to land spacecraft on Mars, after the United States and the Soviet Union. Beijing’s second achievement was the launch of three astronauts to reach the Tianhe core module.

The Mars mission’s name is Tianwen-1 (“Questions to Heaven”). It launched in July of last year and landed on the red planet this May. Once landed, it released the Zhurong rover, which started its tour of Mars on May 22. China is now the second country to successfully operate a rover on Mars, aside from the U.S. Zhurong is exploring Utopia Planitia, also known as Nowhere Land Plain. Utopia Planitia is a basin in northern Mars that may have been created through a meteor impact. Zhurong will analyze the region’s ice levels.

Zhurong both launched and landed around the same times as America’s Perseverance rover. Both countries were taking advantage of Earth’s favorable proximity to Mars in the summer of 2020. But many saw the coinciding launches and landings as a new American-Chinese “space race.”

“This is another milestone advance in our country’s aerospace endeavors,” said Chinese President Xi Jinping. “You have had the courage for challenge, have strove for excellence, and have brought our country to the global forefront of interplanetary exploration.”

The Shenzhou-12 spacecraft launched on June 17 with three Chinese astronauts on board. They will be the first in a steady stream of Chinese astronauts to work at Tianhe. Tianhe is the core module of a future Chinese space station scheduled to be completed in 2022.

The U.S.-led International Space Station (iss) is set to be funded until 2024. It is unknown whether it will be funded after that. Russia, the other major partner in the iss, has suggested it may abandon the project after 2024. This might mean that the only accessible space station after 2024 is Chinese. The U.S. refused Chinese astronauts permission to use the iss; it wouldn’t be surprising if Beijing returned the snub.

Many view space as a place where nations can set aside differences and cooperate with each other. The International Space Station was to be a place where American and Russian astronauts could work together even if their governments were pointing nuclear missiles at each other.

Another Mars mission from this year, the Emirates Mars Mission, came about through cooperation between the United Arab Emirates, the U.S., Japan and India. Michael Collins, one of three astronauts on America’s Apollo 11 mission to the moon, told a journalist from Time:

After the flight of Apollo 11, Neil, Buzz and I were lucky. We made a round-the-world trip. I think 25 major cities, something on that order. And I was flabbergasted. I thought that when we went someplace they’d say, “Well, congratulations. You Americans finally did it.” And instead of that, unanimously the reaction was, “We did it. We humans finally left this planet and went past escape velocity.” That’s not the terminology they used, but I thought that was wonderful. North, white, rich, poor, black, white, east, west—what other achievement can bring all of those disparate interests together? Nothing I can think of, except the first lunar landing did. Albeit very briefly. But it did.

Contrast this with what Ye Peijian, chief commander of the Chinese Lunar Exploration program, said in 2017: “The universe is like the ocean: the moon is like the Daioyu Islands and Mars is like Scarborough Shoal. We will be blamed by our descendants if we don’t go there … and others get there before us.” Diaoyu is the Mandarin name of Japan’s Senkaku Islands, while Scarborough Shoal is an island in the Philippines. China claims the Senkaku for itself and has unilaterally annexed Scarborough.

Space was supposed to bring people together. But it’s becoming an extension of international rivalries on Earth.

Trumpet editor in chief Gerald Flurry wrote “Mars Landing: A Preview of Your Incredible Potential!” when the U.S.’s Perseverance rover landed. “Scientists can see that Mars and the universe are waste and in a state of decay,” he wrote. “Some dream of somehow escaping Earth and introducing life to Mars. Can they do that? Look at what human beings have done to this planet. We are about to destroy all human life on Earth! Even if we ‘escaped,’ we would bring rebellious, destructive human nature with us! Even if we found life on Mars, we would just destroy it in the end!”

But is that all the universe means? Should we look at the universe, all the countless planets, stars and galaxies, with pessimism?

People are intrigued and inspired by the Mars landings. But most will have only a few fleeting moments of inspiration, then the hope will fade. Please don’t let this happen to you. Your potential beyond those pictures [of Mars] is breathtaking and inspiring beyond anything you have ever known. See those Mars pictures for what they truly are: a window into the greatest hope you can ever imagine! Nothing can stimulate our imagination like comprehending our universe potential!

Learn what that “greatest hope you can ever imagine” is by reading Mr. Flurry’s article “Mars Landing: A Preview of Your Incredible Potential!” Also request our free booklet Our Awesome Universe Potential, by Trumpet managing editor Joel Hilliker.