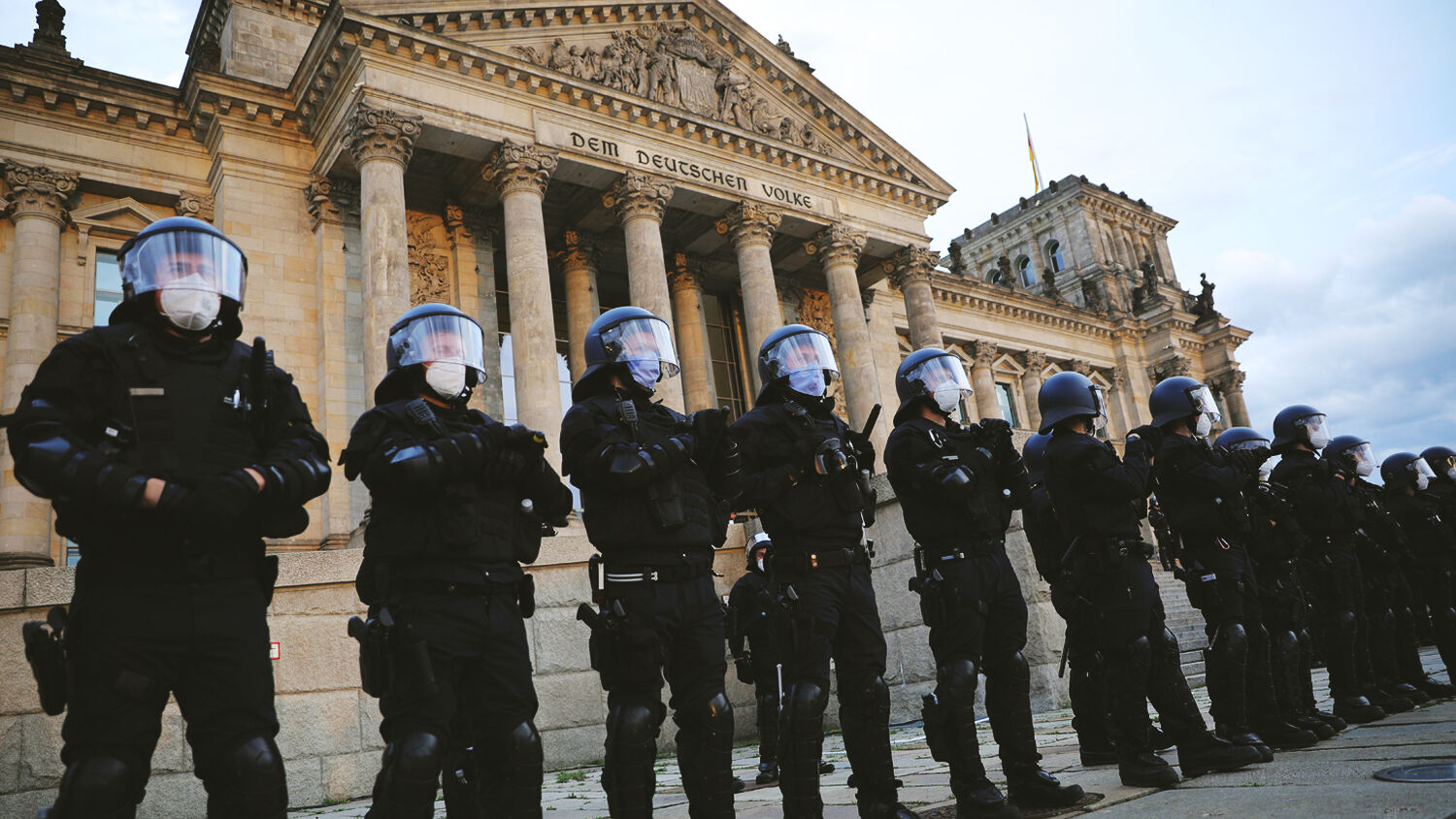 Adolf Hitler ended the first Weimar Republic. Who will end the second?

German politics are traditionally a bedrock of stability. Other European democracies like Italy and Hungary flirt with extremism and dictatorship. But Berlin has generally been considered a bulwark of normalcy and rationalism.

This is changing. German society is struggling with a fundamental problem of extremism. And the media is starting to take notice.

What is going on here? Who or what is responsible for all of this? What does this mean for the country?

First, there is Germany’s problem with Islamic extremism. For several years, Europe has been barraged with Islamic terror attack after terror attack. France has mostly been getting the attention for this. But Germany is no exception. In Cologne in 2015, about a thousand young men “of Arab or North African appearance,” according to the city’s police chief, carried out a mass sexual assault among New Year’s Eve celebrators near the city’s cathedral. In 2016, a Tunisian terrorist drove a truck through a marketplace in Berlin, killing two. In 2017, a Palestinian asylum seeker pledging allegiance to the Islamic State stabbed one man to death and injured six others in Hamburg. In 2018, another terrorist affiliated with the Islamic State threw a Molotov cocktail into a Cologne McDonalds. In 2020, a Syrian asylum seeker stabbed two tourists in Dresden. On May 28 of this year, a man threatened motorists with a knife in Hamburg, shouting “Allahu Akhbar!” (“Allah is greatest!”). The police shot him dead after pepper spray and a taser proved ineffective.

Then you have the anti-Israel protests occurring in the aftermath of the recent Israel-Gaza conflict. Thousands of protesters all across Germany supported Hamas, the radical Islamist group that controls Gaza. In Berlin’s Neukölln district, which has a large Arab population, roughly 6,500 Hamas supporters held an anti-Israel protest. The protesters flew Hamas banners while burning Israeli flags. Some of the protesters threw rocks and firecrackers at police. In a separate Neukölln protest, 120 protesters called for a “free Palestine from Jordan to the Mediterranean.”

As worrying as the rise of radical Islam is, it itself is fueling the rise of another kind of extremism. One that has deep historical roots in Germany.

In 2015, German Chancellor Angela Merkel announced that Germany’s borders were open to refugees fleeing the Syrian civil war. Over a million Syrian refugees ended up settling into Germany. This prompted some to ask questions about how well these refugees were assimilating into German society. Combine this with the spate of Islamic terror attacks, throw in dissatisfaction with the government’s handling of the covid-19 crisis, Russian relations and other issues, and you have a perfect storm for a rise of the xenophobic, militant far right.

The far right is rising extremely fast. On May 4, German Interior Minister Horst Seehofer announced that the level of far-right extremist crimes in 2020 “is the highest level since records began in 2001.” There were a total of 23,064 such crimes in 2021—over half of all “politically motivated crimes.”

What kind of crimes are we talking about?

The most high-profile in recent years was the murder of Walter Lübcke, a state legislator in the German state of Hesse. A member of Ms. Merkel’s Christian Democratic Union (cdu) party, he was a vocal supporter of Ms. Merkel’s opening of borders to Syrian refugees. Stephan Ernst, a right-wing extremist, took offense to that. On June 2, 2019, while Lübcke was at his house, Ernst shot and killed him. This is the first murder of a German politician associated with the far right since 1945.

But Lübcke’s murder hasn’t been the only major case of right-wing extremism in Germany. Last year, the Kommando Spezialkräfte (ksk), the German military’s elite squad, was so thoroughly infiltrated by neo-Nazis that Berlin considered dissolving the whole unit. Many associated with the ksk were involved in a plot to murder several high-profile German politicians. The politicians on target included Foreign Minister Heiko Maas, former Green Party leader Claudia Roth, former President Joachim Gauck and others.

The German police forces have also been infiltrated by far-rightists. As of last December, the state of North Rhine-Westphalia had 203 police officers investigated for far-right links. “I always hoped that it was individual cases [of neo-Nazism], but there are too many of them now,” said North Rhine-Westphalia Interior Minister Herbert Reul. “We have a problem with far-right extremism. I don’t know how far it reaches inside the institutions. But if we don’t deal with it, it will grow.”

There is also the rise of the far-right Alternative für Deutschland (AfD) party. It exploded to become the third-largest party in the Bundestag’s last federal election. The threat the AfD poses to the democratic order was so great that, this March, Berlin put the party under surveillance.

The far right isn’t the only major extremist political force causing problems. So is the far left. Die Linke (“The Left”), the heir to East Germany’s Communist party, currently has 69 seats in the Bundestag. It was formerly placed under government surveillance years ago for similar reasons as the AfD was. Die Linke currently controls one state government. Die Linke’s Bodo Ramelow is the minister-president of the state of Thuringia.

In 2017, far-left extremism reached new heights. That was the year the G20 summit took place in Hamburg. The G20 summit, an annual symbol of globalization and worldwide capitalism, was the first one to feature United States President Donald Trump, a favorite boogeyman for the far left worldwide. German leftists went ballistic. The “Welcome to Hell” riot kicked things off with 12,000 people attacking police officers with projectiles. The police retaliated with water cannons and pepper spray. Seventy-six officers were injured. The total number of protesters in Hamburg was about 100,000, with 12,000 police sent to tackle them.

One of the frontrunners for Germany’s next federal election is Annalena Baerbock’s Green Party. If the Greens win the election, Baerbock would be “the most left-wing chancellor Germany has ever seen,” according to Reaction. She wants to reintroduce Germany’s wealth tax, undertake massive nationalization of private companies, and become more hostile to America.

With political stability eroding, with angry, violent people from all ideologies taking to the streets, with extremist politicians lining up for election season, it seems like Germany is entering uncharted waters.

Only it isn’t. The country has been down this path before.

In the aftermath of World War i and the abdication of the Kaiser, Germany became a republic. The political system was quite unstable. Between 1919 and 1933, Germany had 14 chancellors, with the shortest-ruling serving for 56 days. But the economy (at first) boomed. People were prosperous and excited about the future. Historians call this period the “Weimar Republic,” after the city of Weimar, where Germany’s new constitution was announced.

There were harbingers of worse times coming, however. In 1922, German Foreign Minister Walther Rathenau, a Jew, was murdered by far-right assassins.

Once the Great Depression took hold worldwide, German politics went into free fall. Voters were disillusioned with the mainstream political parties and their incompetent policies. They turned to extremist groups instead. Support for the Nazi and Communist parties skyrocketed. Communist rioters clashed with Stormtroopers in the streets.

In the 1930 federal elections, Adolf Hitler’s Nazis went from having 12 seats to 107. This made the Nazis the second-most popular party in the country. The Communists won 77 seats, putting them in third place. 1932 saw elections in July and November; the Nazi party won the most seats each time. The Communists kept their place in third, gaining seats in every election. The Social Democrats were always either the first or second-most popular party. But they constantly lost seats and credibility with every election.

In the Weimar Republic, there were so many political parties that governments had a hard time both forming coalitions and keeping them intact. Part of the reason the Nazis and Communists were becoming more popular is because the mainstream parties became divided and were unable to work with each other.

It seemed like, eventually, either the far left or far right was going to win. Berlin wasn’t big enough for two extremist movements.

This culminated in Adolf Hitler becoming chancellor in 1933. What followed was the Third Reich, World War ii and the Holocaust.

Germany is headed for an election this September. Angela Merkel, in power since 2005, is not running for reelection. The new leader of the cdu, Armin Laschet, is unpopular with the public. The Social Democratic Party is even more unpopular. There is even talk about the Christian Social Union (csu), the cdu’s perpetual coalition partner, splitting and running on its own platform. Extreme parties like the AfD, Die Linke and the Greens are waiting in the shadows. And with each Islamist terror attack that happens, hardline policies from hardliner politicians become more and more attractive.

Could we be seeing the end of the second Weimar Republic?

“Strong leaders are rising on the world scene today in several nations, including Russia, China and Iran,” writes Trumpet editor in chief Gerald Flurry in his free booklet A Strong German Leader Is Imminent. “But what about Europe? What about Germany?”

He continues: “Germany is one of the top exporters of military armaments in the world, and the third-largest exporter of goods. Its economy dominates the European Union. But Germany does not have a strong leader. Many critics have been voicing this view quite often lately. However, there are several signs in world news that a strong leader is about to rise on the world scene. … A strong German leader is imminent! When he comes to power, this world will be shocked as it has never been shocked before.”

To learn more, please request a free copy of A Strong German Leader Is Imminent.