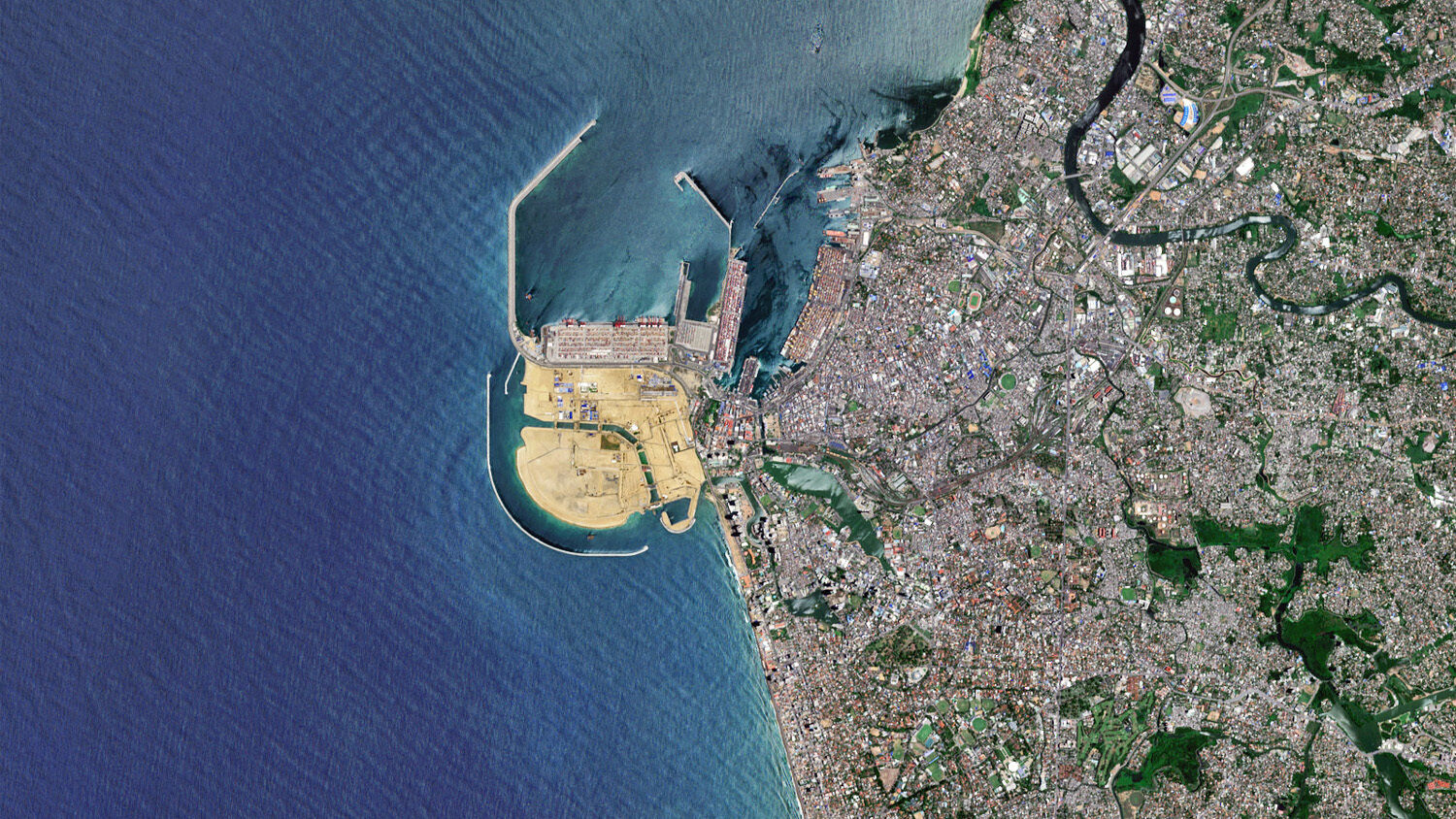 ‘Sri Lanka is on a highway to becoming a Chinese colony.’

Sri Lanka’s Colombo Port City is a marvel of engineering. The work-in-progress sits on 660 acres on the island’s west coast that was reclaimed from the sea over the last decade. It has been touted as the metropolis of the future, the global finance hub of tomorrow, and the next Dubai. It will be a city of stunning skyscrapers but also expansive bike lanes, walking paths and waterways, and ubiquitous green roofs. The choicest acreage in the city center is consecrated as a large, pristine park. And it will all be powered by renewable energy.

The project’s website brands it as “a showpiece city to the rest of the world.”

“It will be a city that will promote a healthy and sustainable lifestyle to all inhabitants, both human and animal” and a “place where environmentally friendly people, organizations and visitors will want to live and do business.”

Here’s how the site currently looks now that the land reclamation work has been completed:

And here is an artist’s rendering of how the futuristic city is expected to look upon completion:

But there is one big problem with this futuristic, maritime Shangri-La: On May 25, Sri Lanka’s Parliament passed the Colombo Port City Economic Commission Bill, which essentially makes the new metropolis a de facto colony of China.

“Colombo Port City will be hybrid zone with Chinese dominance,” analyst Anjali Perera wrote. With the passage of the bill, the idea of a “Chinese colony in South Asian territory gets real.”

The passing of this bill should come as no surprise considering that, from the beginning, Colombo Port City was a Chinese idea and was built with Chinese cash.

It all happened within the framework of President Xi Jinping’s Belt and Road Initiative, a project designed to bind the world to China by building vast networks of roads, railways and ports in nations across Asia, the Middle East, Africa and Europe.

From the start, Sri Lanka bought into Xi’s Belt and Road vision enthusiastically. The nation welcomed infusions of Chinese cash to build several infrastructure projects including the Hambantota Port on Sri Lanka’s southern coast. But it didn’t take long for Sri Lankans to see that they couldn’t repay the loans on Beijing’s terms. In 2017, they determined that their only option was to hand China a controlling stake in the Hambantota Port for a period of 99 years. This transfer set off alarms in Sri Lanka and beyond with China facing accusations of setting a “debt trap” to give itself a potential military footing in Sri Lanka. “The acquisition provided Beijing with a deepwater port in the region in which it can dock its navy off the coast of its key regional competitor, India,” Foreign Policy wrote on Oct. 29, 2018.

But the leadership in Sri Lanka seems not to have been worried by this handover of a vital national asset to China. And now it is happening again.

“… China has already pumped millions into the project,” World Is One News wrote. “They reclaimed the land and built the high-rises. So, expecting them to give up control is futile.”

The publication continued: “Beijing is not looking for a partnership in Sri Lanka. Instead, it wants an overseas province. … It began with the Hambantota Port and has now spilled into the port city of Colombo.

“Sri Lanka is on a highway to becoming a Chinese colony.”

At one time, the peoples of Britain and America controlled virtually all of the world’s important oceanic choke points and sea gates. Dozens of locations such as the Suez Canal, the Panama Canal, Quebec City, Hong Kong and the Cape of Good Hope came under their control—including Sri Lanka’s Port of Trincomalee, which was put under British control in 1795.

Few analysts recognize that the U.S. and Britain coming to control all these key maritime locations was actually prophesied in the Bible.

Mr. Armstrong said the fact that Britain and America acquired all of these strategic sea gates itself proves that these countries are the descendants of Abraham’s family. “[W]e must be modern Israel,” he wrote.

The Bible also reveals that the UK and U.S. would later lose possession of those invaluable sea gates.

Mr. Armstrong explained that this was a prophecy that America and Britain would lose control of the world’s sea gates. And throughout his many years of writing and teaching, he witnessed the UK’s loss of control over the Suez Canal, Singapore, Cyprus, the Cape of Good Hope and many others, including its holdings in Sri Lanka. In 1957, London relinquished control of the Port of Trincomalee to a newly independent Sri Lanka.

In the years since, and especially in the last decade or so, Sri Lanka has edged more and more deeply into the Chinese camp. The nation and its various ports are increasingly in China’s grip. This means another set of gates has not only been pried away from the descendants of Abraham but is now increasingly in the hands of their rival China.

Based on the prophecy in Deuteronomy 28:52, Mr. Armstrong forecast that the trend would keep accelerating. In 1980, he wrote, “As the ‘pride of our power’ continues to be broken, as the British continue to lose their foreign sea gates and possessions around the Earth, as America signs away ownership of the Panama Canal—control over this vital sea gate … this focal prophecy alone represents giant proof as to where the modern ‘remnant’ of the peoples of Israel resides today!”

Mr. Armstrong taught that the trend of the U.S. and UK losing possession of foreign sea gates is leading to a time of catastrophe and suffering for the American and British peoples—and for all the world. But he emphasized that the suffering has a purpose: It will teach the peoples of the world to love God’s law. He underscored that the age of suffering will be brief and will be followed by an era of unprecedented peace.

To comprehend the detailed Bible prophecies Mr. Armstrong founded his accurate forecasts on, and the hope that lies at the heart of these trends, order your free copy of his book The United States and Britain in Prophecy.