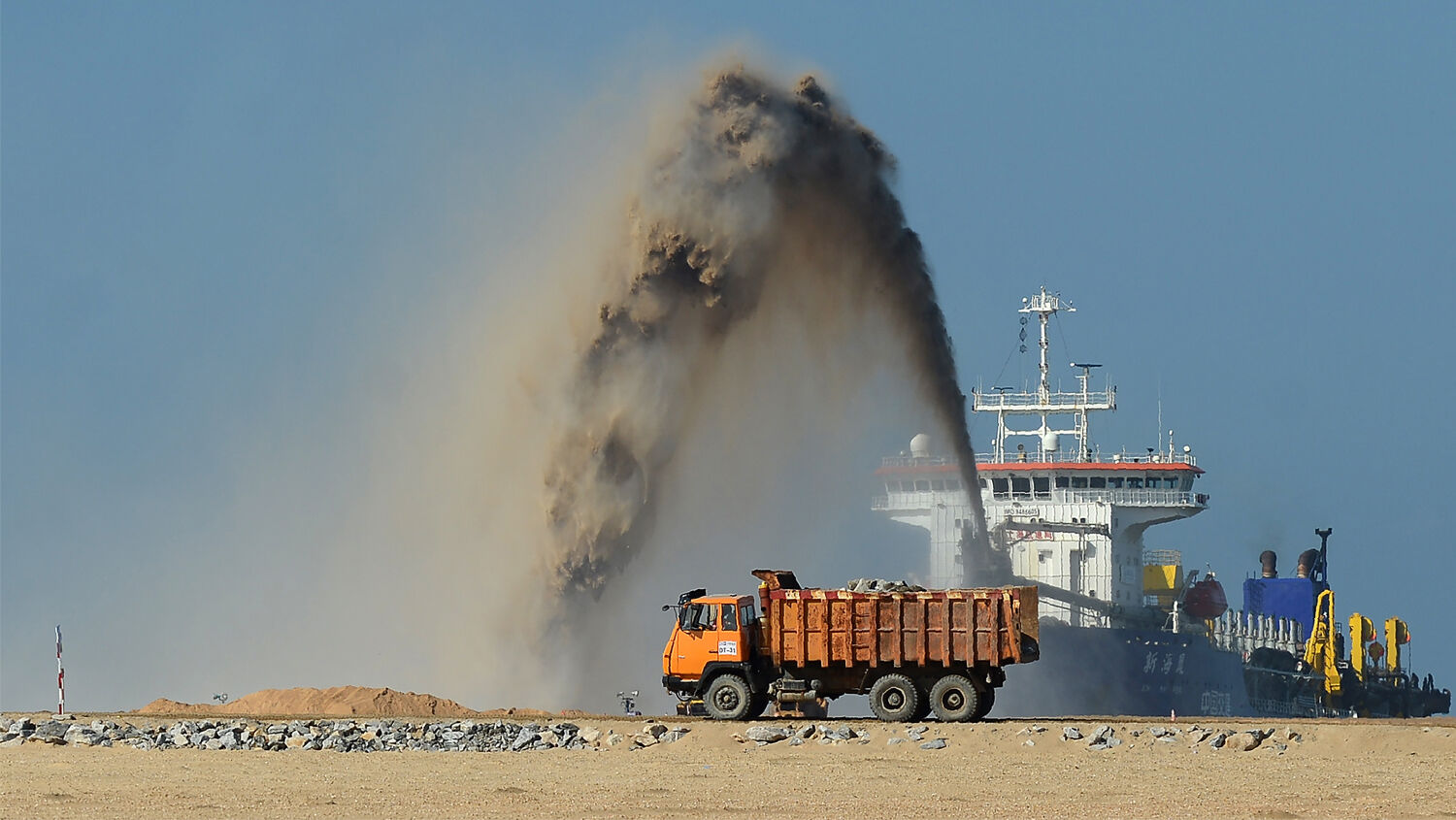 Pumps dredge sand on Dec. 5, 2017, to reclaim land at the site of a Chinese-funded $1.4-billion reclamation project in Colombo.
LAKRUWAN WANNIARACHCHI/AFP/Getty Images

How Chinese investment can be an offensive weapon

Sri Lanka celebrated 70 years of independence on February 4, but China’s economic presence is leading some to question the extent of that independence. Between 2005 and 2017, Beijing invested $15 billion in the island nation’s infrastructure projects. Regional rivals like India see these investments as Chinese economic colonialism.

The ‘String of Pearls’

Sri Lanka is part of the “String of Pearls,” also known as the Maritime Silk Road, which describes a route of ports, airports, sea-lanes, highways and railroads that connect China to the Indian Ocean and the Horn of Africa. China claims this is just an economic corridor, but India claims the “String of Pearls” is a noose for strangling and subduing China’s neighbor.

China has often used aggressive techniques to stake claims along the trade route. In Sri Lanka, the Chinese are waging a silent war to dominate the nation.

In 2010, Sri Lanka went to India to plead for investment. Sri Lanka’s prime minister at the time, Mahinda Rajapaksa, wanted to transform the port in his hometown of Hambantota. This underdeveloped fishing town had been damaged in the 2004 Indian Ocean tsunami. Economic analysts did not think such a port would create much economic value, and India declined investing in the costly exercise.

China invested $361 million in the port project that very year. In 2012, Sri Lanka received another $810 million for the second phase of construction.

But Sri Lanka couldn’t afford to pay back the loan. This gave China powerful leverage over the Sri Lankan government.

In December, China repaid itself by taking control of Hambantota Port. Facing a huge debt to its creditors, Sri Lanka had few options but to offer the port to China on a 99-year lease.

For the next century, China will own this southern Sri Lankan port, which is a major maritime asset in the Indian Ocean not far from the southern tip of India. Hambantota also happens to be Sri Lanka’s naval headquarters, and naval officers are seeking ways to distance their operations from prying Chinese eyes.

But Hambantota is just one example. In 2010, China invested $200 million for a second international airport in Sri Lanka. In 2013, it invested $272 million for a railway. By 2015, Sri Lanka owed China $8 billion. In early 2018, China pledged another $1 billion for Sri Lanka’s Colombo Port City project.

Foreign debt now equates to 75 percent of Sri Lanka’s gross domestic product, the total sum of goods and services it produces in a year. The Sri Lankan people are slaves to the government’s debt.

“They [the Chinese] called in the debt, and the debt has been paid by Sri Lanka giving them the (Hambantota) Port,” Malcolm Davis, a senior analyst at the Australian Strategic Policy Institute, told cnn. “That port then gives them not only a strategic access point into India’s sphere of influence through which China can deploy its naval forces, but it also gives China an advantageous position to export its goods into India’s economic sphere, so it’s achieved a number of strategic aims in that regard. … This is part of a determined strategy by China to extend its influence across the Indian Ocean at the expense of India, and it’s using Sri Lanka to achieve it.”

India has caught on to China’s strategy, as has Japan and other nearby nations. India is trying to muscle in on projects in Colombo and Hambantota. Japan is offering help, too. But China is already building.

Meanwhile, Sri Lanka’s new airport services just a few flights each day. The rest of the time, it sits silent as Sri Lankans continue to pay for it. The new port facilities in Hambantota do not include an economic zone for trade, so few can take advantage of the port. It sits relatively unused, except by China.

China is shackling nations like Sri Lanka with debt and leveraging the debt to secure advantageous economic infrastructure and political outcomes. This pattern is occurring from the Philippines to Eritrea—and it includes Australia. Australia borrows billions of dollars from China, and China owns Australia’s northernmost port, which is also home to Australian and United States naval bases. China owns the lease for 99 years.

Last August, U.S. Secretary of State Rex Tillerson spoke at an East Asia ministerial summit and admitted, “We will not be able to compete with the kind of terms that China offers. But countries have to decide, what are they willing to pay to secure their sovereignty and their future control of their economies?”

The Trumpet has written extensively on China’s efforts to control this vital trade route. We write about China not from an economic standpoint, but from that of Bible prophecy. The Bible actually has a lot to say about the rise of China and the role it will play in the end time. China will soon wield its economic and military might in a violent global conflict.

China’s effort in Sri Lanka is prophesied in the book of Revelation. A prophecy in chapter 16 refers to an end-time Asian bloc of nations known as the “kings of the east” (verse 12). China is already exerting powerful influence over many smaller nations in the region. Bible prophecy states that this bloc of nations will form an army of 200 million soldiers that will march across the Middle East (Revelation 9:16). We discuss these prophecies in our free booklet Russia and China in Prophecy.

When you look at the “String of Pearls” with its empty ports, quiet airports and lonely highways, you could think China had made poor investments with little opportunity for return. But these are part of a developing Chinese superhighway. Nations like India and Japan are finally waking up to the realization that Chinese-controlled ports don’t just take in tankers. They take in warships. Airstrips don’t just accommodate cargo planes; they also provide landing areas for fighter jets. China is gobbling up parts of the South China Sea, the Indian Ocean and elsewhere. To learn more about this prophetic trend, watch the 90-second video below.