Since Great Britain ceded control to China, is Hong Kong better off? 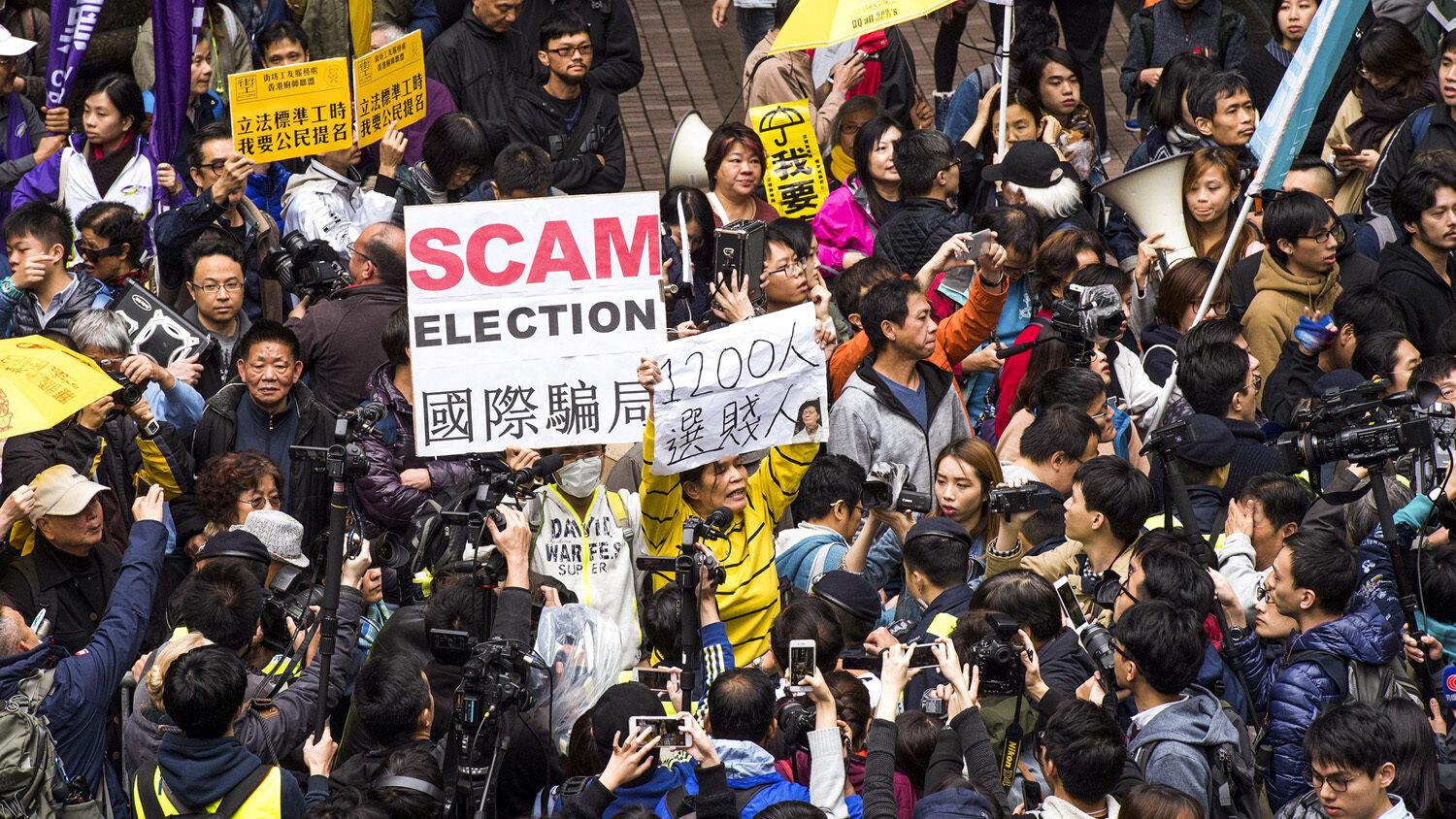 Since Great Britain ceded control to China, is Hong Kong better off?

Moments before midnight on July 1, 1997, the British national anthem blared with incongruous triumph throughout the halls of Hong Kong’s Convention Center extension, and the red, white and blue Union Jack was lowered from the flagpole. As the song’s final chord faded to silence, the clock struck a new day. The musicians then launched into China’s national anthem, “March of the Volunteers,” as officials hoisted the red, five-star Chinese flag.

The United Kingdom’s rule over Hong Kong was officially over.

The British had raised their flag over this strategic territory in 1841 and flown it there for 156 years as they transformed a sparsely inhabited island of just a few tiny fishing villages into a beacon of prosperity and modernity. Now the fading empire handed it to a rising giant.

“July 1, 1997, will go down in the annals of history as a day that merits eternal memory—the return of Hong Kong to the motherland,” Chinese President Jiang Zemin said at the handover ceremony. Within a few hours, 4,000 soldiers from the “motherland” had crossed the border to assert Beijing’s sovereignty over Hong Kong.

With the historic handover, Chinese power multiplied, millions of British subjects were suddenly citizens of a newly created entity called the Special Administrative Region of Hong Kong, and the final act was performed in the closure of the British Empire.

A Pearl for Beijing

One of the most densely populated regions on the globe, Hong Kong is made up of Hong Kong Island, the Kowloon Peninsula, more than 200 surrounding islands, and, to the north, the New Territories.

In obtaining “the Pearl of the Orient,” China not only won control of the world’s third-highest-ranking center of global finance, it also inherited a $380 million naval facility constructed there by the British. And Hong Kong’s location at the confluence of the Pacific Ocean and the South China Sea gives this naval base, and the territory in general, immense strategic value.

In the July 2016 Trumpet, editor in chief Gerald Flurry highlighted the way China’s grip on Hong Kong has boosted its effort to control the South China Sea. He wrote, “Britain actually gave the South China Sea prize of Hong Kong to the People’s Republic of China in 1997. Now that U.S. military presence in the area has been drastically reduced, China is claiming the entire South China Sea as its own!” (“China Is Steering the World Toward War”).

For the Chinese government, acquiring Hong Kong was far more than a symbolic victory.

Back in 1997, 6.4 million Hong Kongese were separated from the mainland by 156 years of ideological and institutional differences. They were uneasy about the transition.

Most were descendants of families who had come to live under British rule as refugees from communism. They were anxious about being swallowed up by the authoritarian mainland.

China promised Hong Kong that it would retain its distinct identity under a rubric called “one country, two systems.” This model meant that, for at least 50 years, Beijing would let Hong Kong continue its economic policies, and Hong Kong could enjoy what its mini-constitution, the Basic Law, called a “high degree of autonomy.”

In the early years, the “two systems” model was carefully followed. Troops from the People’s Liberation Army maintained a low profile in Hong Kong. Law enforcement bodies from the mainland had no jurisdiction in the territory. And mainland officials refrained from giving public speeches there.

But in 2003, after some 500,000 Hong Kongese filled the streets to protest a national security law that the local government was pushing, Beijing took action. The Chinese government launched a campaign demanding patriotism among Hong Kongese and calling for the territory to be governed by leaders who “love the country and the city.” Beijing asserted its right to interpret the Basic Law at will.

A decade later, in June 2014, the Chinese State Council dropped a bombshell, publishing a 15,500-word white paper to clarify “one country, two systems.” It said that the Chinese government in Beijing has “comprehensive jurisdiction” over Hong Kong. It said that rather than having full autonomy, Hong Kong was given only whatever authority to run its affairs that were approved by Beijing.

That August, in a follow-up to the white paper, the Chinese government imposed a rigid framework for electoral reforms. It said that for the 2017 election for Hong Kong’s top civil position of chief executive, the people could vote only for candidates who had been preapproved by the Chinese government. Essentially, this was “democracy with Chinese characteristics”—akin to that of the mainland.

Tens of thousands of Hong Kongese took to the streets to protest this as “fake” Chinese-style democracy, and to demand an unrestricted choice of candidates. For weeks, the demonstrations congested many of the city’s major traffic arteries. Occasional skirmishes broke out between protesters and police, who sometimes used pepper spray, batons and tear gas on the crowds.

Some analysts believed the protests could spread into the rest of China, and viewed them as a legitimate threat to China’s ruling Communist Party. But as the weeks went by, the number of protesters fell. Eventually it was clear that, protests or not, China would not compromise and Beijing was the only real authority in Hong Kong.

This sobering reality was reinforced in 2015 when five staff members of Hong Kong’s Causeway Bay Books disappeared, apparently abducted by Chinese agents as punishment for publishing embarrassing books about the private lives of officials in the mainland.

In late 2016, the Chinese government also blocked the seating of two politicians who had altered their oath of office in protest against Chinese rule.

Then on January 28 of this year, Chinese security agents rushed into the Four Seasons Hotel Hong Kong and abducted one of the territory’s most powerful billionaires. Since then, the man’s whereabouts are still unknown.

Meanwhile, the Chinese military garrison in Hong Kong is steadily taking on a more visible and active role.

All of these developments affirm fears that Hong Kong is rapidly losing its autonomy to China. The freedoms that distinguished Hong Kong from the rest of China are rapidly disintegrating. Many wonder how long it will be before Hong Kong is fully grafted into the authoritarian mainland. On June 26, Time magazine wrote, “Hong Kong’s political future has never been more fraught with anxiety.”

After the 1997 handover of Hong Kong, in a tragic parody of the famous Winston Churchill quote, a member of Britain’s Ministry of Defense said, “Never before has so much, used by so many, gone for so little.”

It is significant that Hong Kong is one of the “sea gates” allowing access to the South China Sea. It was one of many such gates that Britain controlled during its empire era. Among the others were the Suez Canal, Singapore, Cyprus, the Cape of Good Hope and Malta.

In Genesis 22, some astounding promises are made to the patriarch Abraham. One of them says that his descendants, particularly the peoples of Britain and America, would come to “possess the gate of his enemies” (verse 17). The context and related passages show that this is about sea gates, such as those listed above, which allowed Britain to control the seas for so long.

The Bible also prophesied that the British peoples would later lose the sea gates that they had possessed: “And he [foreigners] shall besiege thee in all thy gates, until thy high and fenced walls come down, wherein thou trustedst, throughout all thy land: and he shall besiege thee in all thy gates throughout all thy land, which the Lord thy God hath given thee” (Deuteronomy 28:52).

And over the years, this has been fulfilled. One by one, Britain lost or surrendered many of those sea gates that it possessed. Twenty years ago, Hong Kong was added to the list of surrendered gates.

At that historic time, late Trumpet columnist Ron Fraser wrote an assessment that events since then have proven accurate: “With the end of British rule in Hong Kong, we see the final act performed in the closure of an empire—a God-given empire …” (Philadelphia Trumpet, June 1997).

To understand what outcomes to expect from China’s increasing power, and the continuing decline of the United Kingdom, request our free book The United States and Britain in Prophecy, by Herbert W. Armstrong.