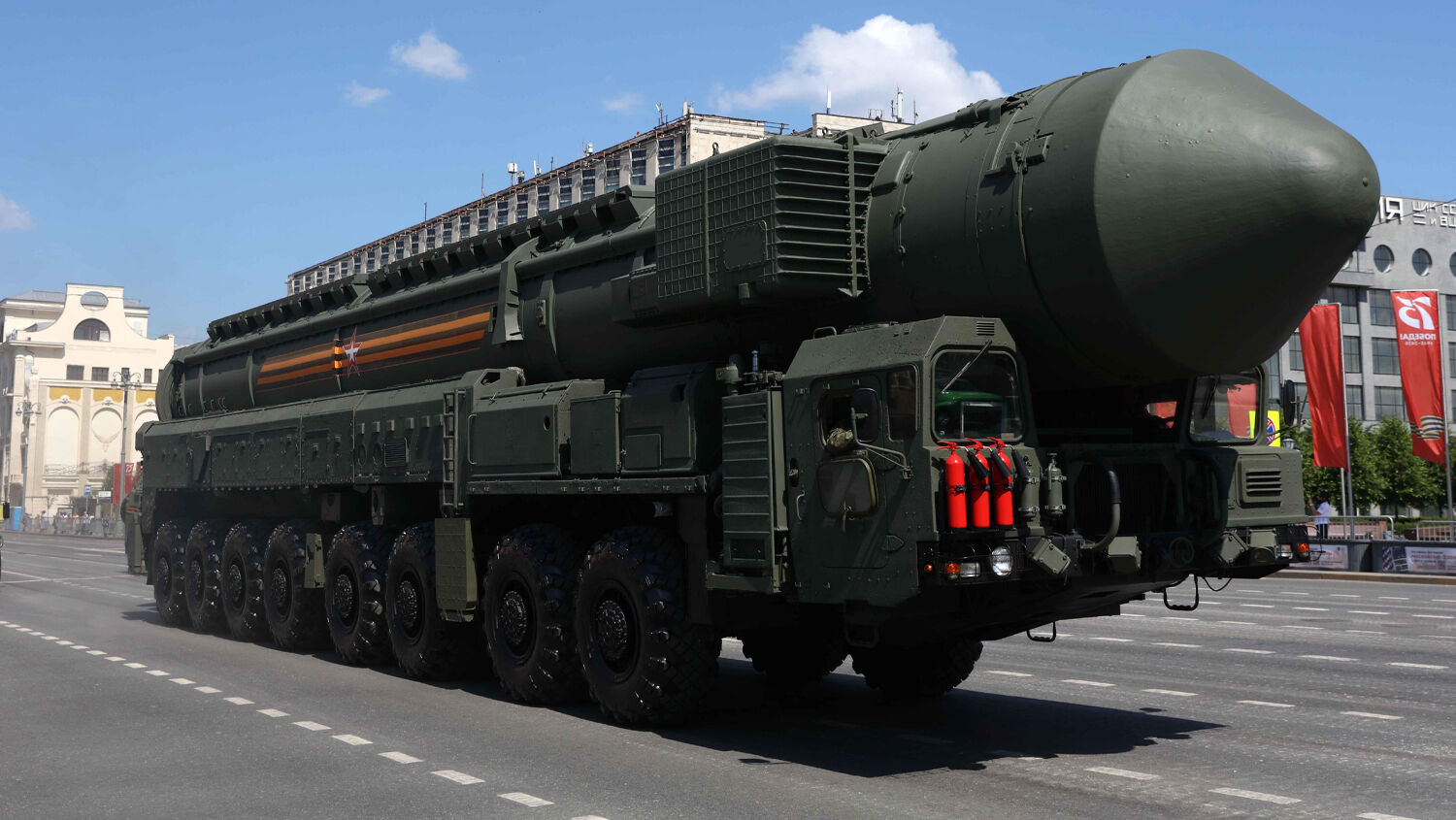 The Yars mobile intercontinental ballistic missile launcher moves to Red Square during the military parade marking the 75th anniversary of the victory in the Great Patriotic War on June 24, 2020 in Moscow, Russia.
Wang Xiujun/China News Service via Getty Images

Efforts by the United Nations and other international organizations to reduce the nuclear threat have failed.

By Jeremiah Jacques • May 4

Only a decade ago, analysts were discussing the ludicrous deal the Obama administration had made with Russia that would see each of the two nations cut an equal number of nuclear weapons from their stockpiles.

The deal was an ill-conceived one for the United States because it was eliminating state-of-the-art defensive weapons capable of reliably shooting down incoming intercontinental ballistic missiles.

Russia, on the other hand, was dismantling archaic, Soviet-era weapons that were strictly offensive in nature. These were the kinds of old bombs that do little more than—as Winston Churchill once phrased it—“make the rubble bounce.” Russia’s nuclear stockpiles were just too primitive to make it even close to an equal deal.

The late Charles Krauthammer was among those who sounded the alarm about the imbalance of the agreement. For America, he wrote, it was “useless at best, detrimental at worst.”

But much has changed in 10 years.

During Russian President Vladimir Putin’s April 21 State of the Nation Address to the Federal Assembly, he said: “The share of advanced weapons and hardware … in the nuclear triad … will exceed 88 percent already this year.”

This means that of all the intercontinental ballistic missiles, strategic aircraft, submarines and everything else involved in Russia’s nuclear program, at least 88 percent of it will be modernized in a matter of months. It will be advanced technology, in many cases on par with comparable U.S. assets. And in some notable categories, such as hypersonic missiles, the Russian weapons are believed to be even beyond American capabilities.

President Putin went on in his speech to emphasize that Russia is determined to keep advancing its weaponry to continue to close the gap with America. And it is determined to qualitatively strengthen all aspects of its Armed Forces.

This shows that even as Russia has been suffering through years of serious economic strain, which became especially severe during the coronavirus pandemic, Putin has always found room in the budget to spend tens of billions of dollars annually on the military—with focus on nuclear weapons. And he is dead set on continuing to make them as state-of-the-art and lethal as possible. And in some cases, such as with hypersonic weapons, to make them literally unstoppable—even by America’s most advanced defense systems.

“Russians today are chagrined to learn that they are worse off than Romanians and Turks” https://t.co/utdKGlMLLl

Meanwhile, the same day that Putin made his speech about Russia’s nuclear advances, Reuters published a report about China that can only be called a bombshell.

The report concerns a new generation of nuclear-power facilities that China has been working to bring online. China’s leaders have emphasized that these new facilities are intended only to generate power to help the nation transition away from coal dependence. If China can build enough of them, they say, then the nation can shutter many coal plants and reduce its massive carbon footprint.

But the new Reuters report says the fast breeder reactors at these new nuclear facilities function in a way that produces large amounts of weapons-grade plutonium—one of the fundamental materials used to make nuclear weapons.

“With a fast breeder reactor, you now have a very large source of weapons grade plutonium available to you,” the report quotes Navy Adm. Charles Richard, the commander of the U.S. Strategic Command, as saying. “That will change the upper bounds of what China could choose to do if they wanted to, in terms of further expansion of their nuclear capabilities.”

The first of these new Chinese plants is scheduled to be operational in 2023, with several others close behind.

At present China is believed to have only around 200 nuclear warheads. But whispers in Beijing have said some among the Communist Party are not content with an arsenal so much smaller than those of Russia and the U.S., which have 6,375 and 5,800 nuclear weapons, respectively.

Now that China has a campaign underway to build reactors that could pump out large amounts of weapons-grade plutonium, those who wish to see China’s nuclear arsenals grow may be about to get their wish.

In recent months, Iran has also made strides in its drive to develop nuclear weapons. North Korea has improved its nuclear delivery systems. German military personnel have received more training to mobilize and drop the nuclear bombs that America has stocked in Germany. And more questions and concerns have emerged over how vulnerable Pakistan’s nuclear weapons are to terrorist hijacking, especially with America pulling out of neighboring Afghanistan.

On top of all this, discussions have opened about the possibility of other nations—namely Japan, Saudi Arabia, Taiwan, Turkey and Ukraine—obtaining nuclear arsenals of their own.

In so many nations, nuclear developments are underway revealing the fragility of the global peace. They show that all of the efforts by the United Nations and other international organizations to reduce the nuclear threat have failed. None of man’s various disarmament efforts, or peace plans or treaties have been able to secure sure and lasting peace.

In all such ideas, there is nothing to forcibly prevent unfathomably destructive weapons from being used. And there is no true cause for hope.

Trumpet editor in chief Gerald Flurry writes about this in his 2017 booklet Nuclear Armageddon Is ‘At the Door.’ After discussing several of the specific nuclear threats around the world, he states: “Only God can solve our number one problem: that of human survival.”

Mr. Flurry’s booklet makes it very clear that there is a plan spelled out in the Scriptures that will give mankind a certain and hope-filled solution. But he explains that the Bible also contains some dire warnings, showing that the current tensions around the world will continue to rise. And in the near future, nuclear war will break out.

Matthew 24:21-22 record Jesus Christ saying: “For there will be greater anguish than at any time since the world began. And it will never be so great again. In fact, unless that time of calamity is shortened, not a single person will survive …” (New Living Translation).

This future “time of calamity” that could end all human life could only be describing a global nuclear war with enough weapons detonated to cause nuclear winter. This terrible time is coming soon, and it will threaten to end every human life on the planet.

Amos 5:3 reveals that in certain cities, only 10 percent of the population will live. Jeremiah 2:15 shows that other cities will be entirely scorched by nuclear devastation, without a single person left. These are chilling prophecies. And they show that the nuclear threat did not end with the dissolution of the Soviet Union.

But the Bible’s prophecies do not end with nuclear conflict annihilating all human life. Continuing the passage in Matthew 24, just after Jesus said that nuclear war at the end of this age would be so devastating that it could wipe out mankind, He added a crucial detail: “But it will be shortened …” (verse 22).

So nuclear World War iii will happen, but it will be cut short. Before Russia, China and other world powers detonate enough nuclear weapons to wipe out mankind, Jesus Christ will interrupt the chaos and bloodshed.

Just after that time of unprecedented death, Christ will usher in an age of unprecedented peace and prosperity. Amos 9:14 says that those same cities that will have been left with only 10 percent of their populations will then be rebuilt. “[T]hey shall build the waste cities, and inhabit them; and they shall plant vineyards, and drink the wine thereof; they shall also make gardens, and eat the fruit of them.”

Jeremiah makes clear that as the people undertake the massive rebuilding project, each individual will come to know the true God. Every person will learn to keep His law of love. As a result, that “great joy and peace” that Mr. Flurry mentions will begin to saturate the whole world.

“We are now at the edge of this nuclear abyss!” Mr. Flurry writes; but as all these “horrible signs come to pass, we know Christ is about to return.”

These are crucial truths to understand: both the warning about the war on the horizon and the good news about the hope just beyond it. But it is possible to understand and to learn how to start enjoying that “great joy and peace” that results from choosing life today. An excellent way to begin your study on these topics is to order your free copy of Mr. Flurry’s booklet Nuclear Armageddon Is ‘At the Door.’