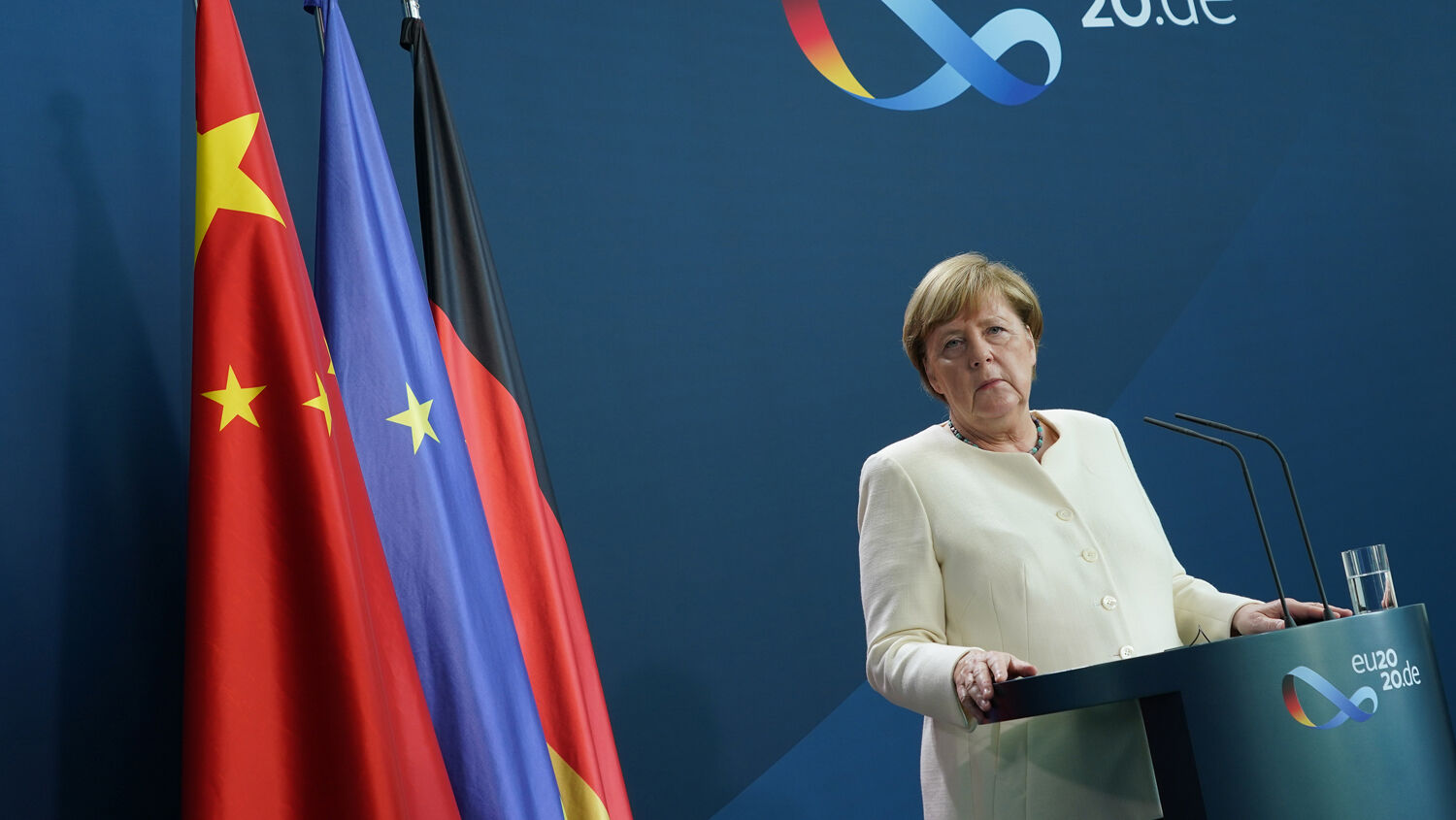 German Chancellor Angela Merkel, along with European Commission President Ursula von der Leyen and President of the European Council Charles Michel, who were both tuning in via video link from Brussels, speaks to the media following a video linked meeting with Chinese President Xi Jinping during the coronavirus pandemic on September 14, 2020 in Berlin, Germany.
Sean Gallup/Getty Images

Germany and Europe say they are against China’s authoritarianism. But the truth is that the Chinese market is simply too lucrative to abandon.

Hungary, in particular, opposed the measures that included plans to welcome Hong Kong workers and students to the EU. The nation even opposed measures promoting freedom of expression and engagement with civil society.

The pro-Beijing government in Hungary is drifting toward authoritarianism in its own right. President Viktor Orbán’s government has often been viewed as the stumblingblock to anti-China legislation.

But it’s not that simple.

Two weeks ago, German Chancellor Angela Merkel and French President Emmanuel Macron held a virtual summit with Chinese President Xi Jinping. Official readouts of the meeting from the Chinese and German governments show that there was no mention of Hong Kong, potential sanctions or human rights violations.

One senior Hungarian official told Balkan Insights about his government’s approach to China: “If there is a concrete, serious request, we are allied with nato and the United States … but if there is no unity or common position, if something is a grey area, we do what the Germans do.”

And what do the the Germans do? Writing for Balkan Insights, Szabolcs Panyi explained Germany’s ambivalent approach to China:

Chancellor Angela Merkel’s well-documented reluctance to confront China has come in handy for Orbán, especially given that Hungarian-Chinese foreign trade is dominated by German-owned companies—one of Hungary’s main export products to China are Audi engines, and German car manufacturers have an intimate relationship with Hungarian decision makers. However, as the former senior official put it, the difference is that “while the Germans do business in silence, Hungarians roar praise for China in political statements.”

Germany and Europe say they are against China’s authoritarianism. But the truth is, the Chinese market is simply too lucrative to abandon. Over the last few decades, European business has increasingly entrenched itself in China. In 2000, for example, the EU’s Chamber of Commerce in China had 51 members. Today, it has over 1,700.

And on Dec. 30, 2020, China and the European Union agreed to the preliminary steps in a landmark investment deal, which will deeply integrate these two powerful trade blocs. It gave European firms in manufacturing, computing services and health more freedom to operate in China without sharing their intellectual property and technology with Beijing.

As close as China and Europe have grown in recent years, this investment deal will make a leap toward even closer economic ties.

And so, despite some sanctions from Europe on China, it is mostly business as usual.

In March, for example, Europe placed sanctions on China for its abuse of Uyghur Muslims. And yet the day after the sanctions were announced, Joerg Wuttke, president of the European Chamber in China, met with Zhao Haishan, vice governor of the Hubei province which borders Beijing. Zhao reportedly “expressed his appreciation of the European business community’s donations both in capital and in-kind during the covid-19 outbreak.” He also said he looked forward to continued foreign investment and cooperation.

Several similar events are scheduled for the coming months between EU companies and Chinese officials, despite sanctions. Clearly what the EU says and what it does are two different things.

Despite China’s human rights violations in Xinjiang and Tibet, despite its assault on Hong Kong’s freedoms, despite its encroachment on Taiwan and the South China Sea, despite its role in unleashing covid-19 on the world, despite its increasingly dictatorial nature, Europe is drawing closer to China.

These developments are in accordance with Bible prophecy.

The Prophet Isaiah was inspired to record a prophecy about a powerful multinational trade alliance to rise in our time. In chapter 23, he lists its main members as “Chittim” and “Tyre” (verse 1). Chittim, in Bible prophecy, refers to China, while Tyre is the economic powerhouse rising in Europe (for proof, see Trumpet editor in chief Gerald Flurry’s free booklet Isaiah’s End Time Vision). The same chapter shows that Japan will also be part of this great trade bloc. It will become so big and powerful that for a short time, it will actually control global trade. And it will use this control to freeze America out of the global market.

“This is why Isaiah’s prophecy of an end-time ‘mart of nations’ that includes both European and Asian powers is so intriguing,” Mr. Flurry writes. “And why the trend of collusion between these two great economic blocs is worth watching.”

Europe’s willingness to collaborate with authoritarian China is leading to the fulfillment of these prophecies. We should expect this trend of European duplicity and cozying up to China to continue. To fully understand these prophecies, please request your free copy of Isaiah’s End-Time Vision.