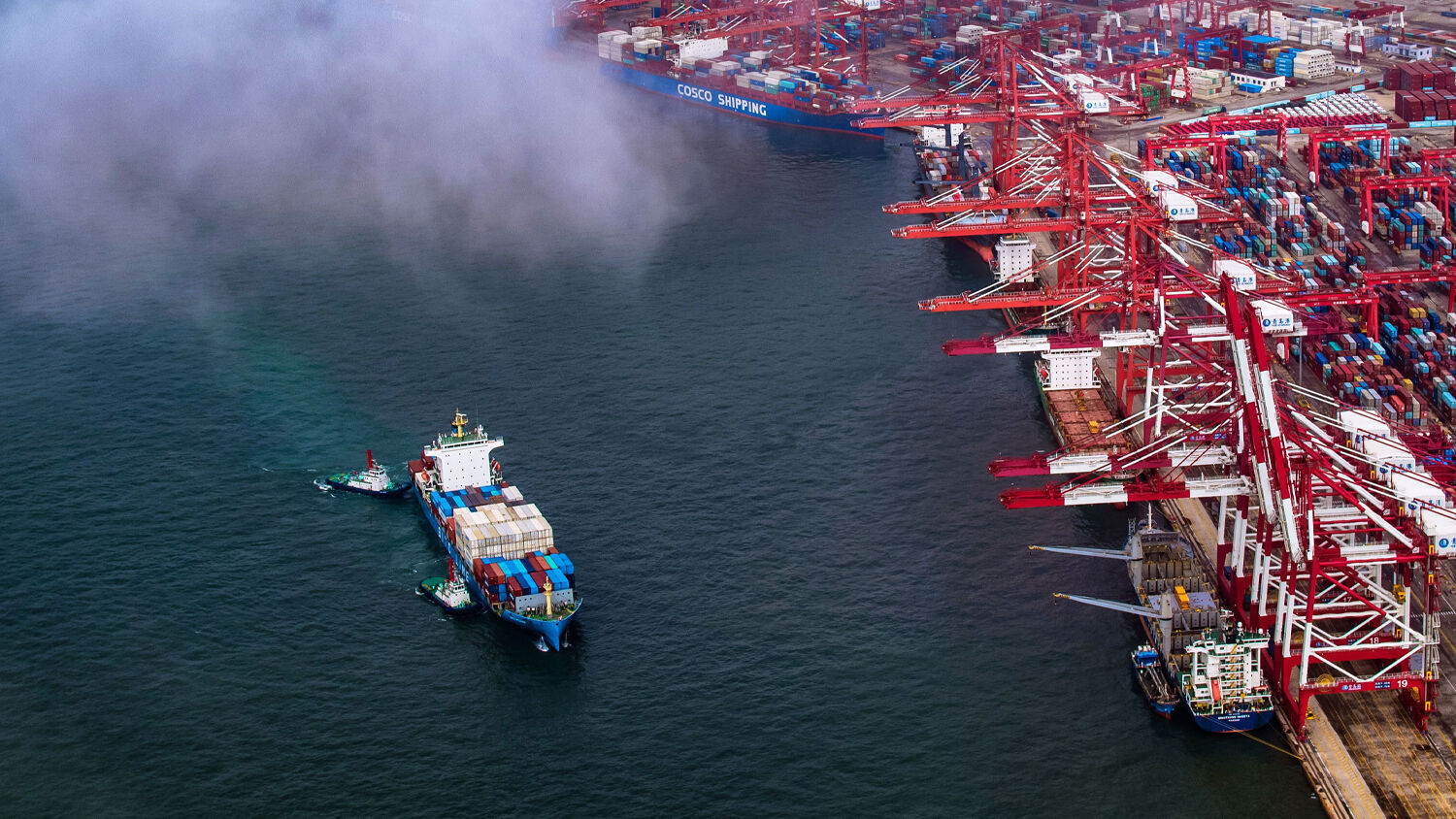 A container ship berths at the port in Qingdao, in China’s eastern Shandong province.
STR/AFP via Getty Images

‘This brings a watershed moment for EU-China trade ties.’

Data published by Eurostat on February 15 shows that China overtook the United States in 2020 to become the European Union’s number one trade partner in goods.

Despite the coronavirus pandemic, exports of European goods to China grew over the previous year by 2.2 percent to reach $244 billion. Imports of Chinese goods increased 5.6 percent to $463 billion. Meanwhile, trans-Atlantic trade went steeply in the opposite direction, with exports of EU goods to America falling by 8.2 percent and imports plummeting by 13.2 percent.

So for the first time, China is number one for European trade.

“This brings a watershed moment for EU-China trade ties,” Xu Haifeng, chairman of the China Chamber of Commerce to the EU, told China’s Xinhua news agency.

Xu said China’s deft measures to combat covid-19 along with the resilience of its supply chain underpinned the development. He added that the Chinese are “delighted” by the news.

Zhang Ming, head of the Chinese Mission to the EU, said that while China’s trade grew with most other nations last year, the increase with Europe was by far the largest. China’s trade in goods with Europe was “more than double the average growth rate of China’s trade with its global partners,” he said. The development “fully speaks to the strong resilience and importance of China-EU economic and trade cooperation.”

European leaders have also welcomed the news. “China is now the booming economy in the world,” Bernard Dewit, chairman of the Belgian-Chinese Economic and Commercial Council, told Xinhua. “[I]t’s in the interest of both parties to improve, to further exchange, to negotiate eventually new common grounds for the benefit of both parties, and at the end the world.”

This watershed trade development follows an even greater milestone in December when China and Europe concluded negotiations on a major investment treaty. The Comprehensive Agreement on Investment will grant European companies greater-than-ever access to Chinese markets. Under the terms, China will also give European firms a “better level playing field” in terms of competition with China’s state-owned companies, subsidies and forced technology transfers.

These developments mean two of the most powerful trading blocs on the face of the planet are more deeply integrating. The ramifications are potentially world-changing, and may seem surprising. But these are actually the kind of developments we should expect to see more and more of, if we understand Bible prophecy.

Some 2,700 years ago, the Prophet Isaiah discussed a powerful multinational trade alliance that would form in our lifetimes. And he listed who its main members would be.

In Isaiah 23:1, he names one of them as “Chittim.” Trumpet editor in chief Gerald Flurry explains the modern identity of this name in his booklet Isaiah’s End-Time Vision: “Kittim is synonymous with the Chittim of Isaiah’s prophecy. … After their migration through Central Asia, the Kittim made their appearance in modern-day northeastern China and Mongolia ….” So this name indicates modern China.

Isaiah’s prophecy goes on to name “Tyre” as one of the other major players in this trade alliance. Mr. Flurry explains what this name signifies: “The spiritual center of the [modern European] Holy Roman Empire is called Babylon in your Bible (Revelation 17:5; 18:1-3). But here in Isaiah, the Bible refers to Tyre (and its allies Zidon, etc) as the commercial center of this European power.”

Isaiah 23 and a companion passage in Ezekiel 27 show that Japan and Russia will also join this globe-girdling economic grouping. Together, these nations will control worldwide trade for a brief time, and the prophecies show that they will use that control against America and some of its allies.

“The Bible contains many prophecies of that European power attacking America,” Mr. Flurry writes. When it happens, “there will be no help or sympathy from Asia.” In fact, “Russia, China and Japan” will establish a “brief alliance” with Europe. “All of them are going to besiege America, Britain and the Jewish nation.”

In light of these prophecies, we should not be surprised to see Europe and China arduously working to better integrate their economies. We should actually expect the already robust ties between them to keep growing stronger. And even as China becomes more powerful, aggressive and malicious, we should expect Europe to increasingly side with Beijing—and against America.

The Scriptures show that this trend will culminate in a time of catastrophe and darkness. But the Bible also shows that the darkness will not last long and will be overcome by light. Then a fundamentally different chapter of history will begin—far brighter than any mankind has ever experienced.

To understand the significance of these developments, and what it means for your life, order your free copy of Mr. Flurry’s booklet Isaiah’s End-Time Vision.