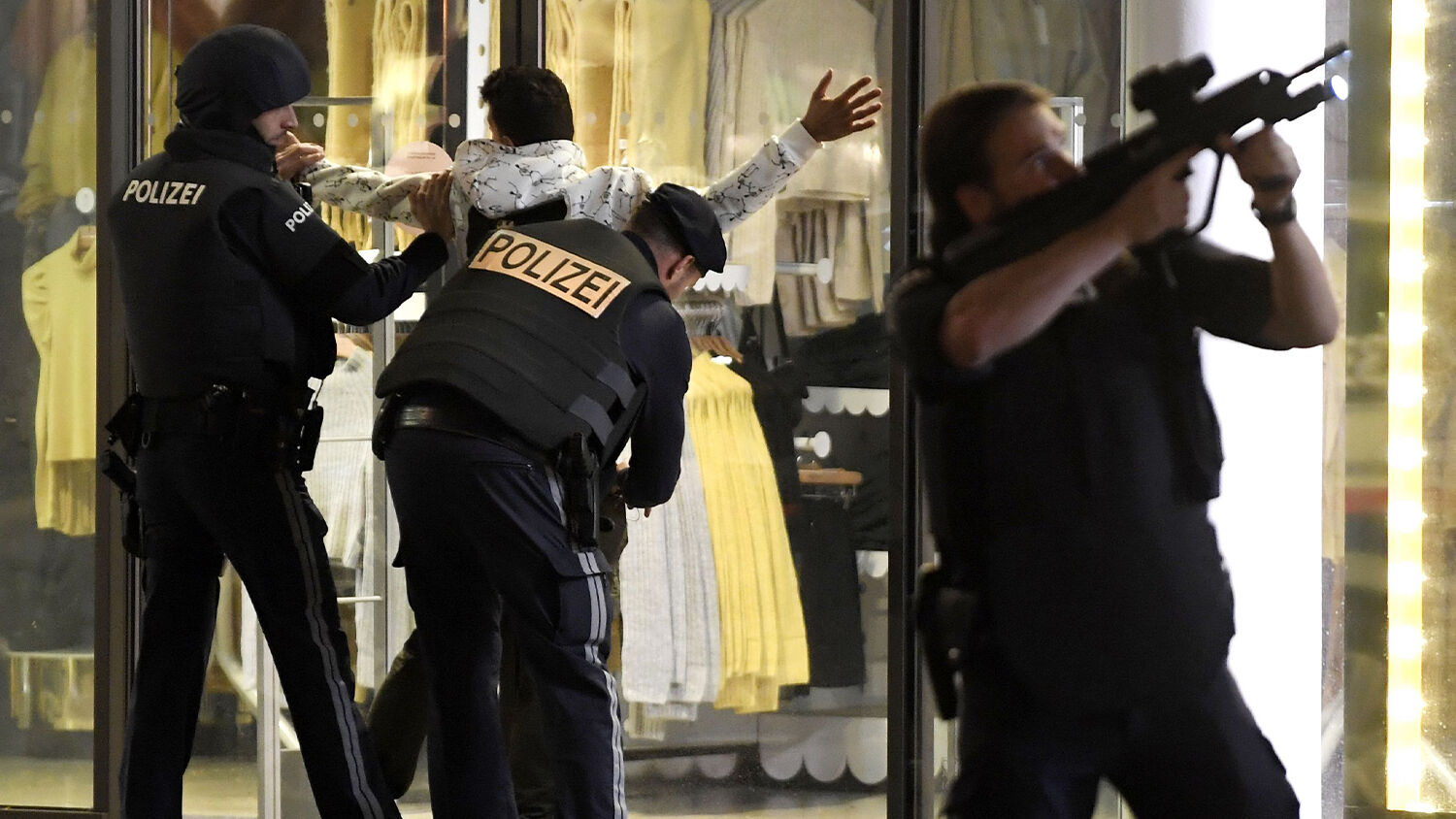 Police detain a person in central Vienna on November 2 after a shooting near a synagogue.
ROLAND SCHLAGER/APA/AFP via Getty Images

Will a common foe serve as a catalyst to unite Europe?

A gunman shot at least five people dead while injuring many more in an Islamic terrorist attack on the streets of Vienna on the night of November 2. Karl Nehammer, Austria’s interior minister, stated that the attacker was a supporter of the Islamic State. Police shot dead the gunman, who was wearing a fake explosive device. They began a manhunt for others who may have been involved in the attack.

The shooting occurred near Vienna’s main synagogue, but it is unclear if the attack was intended to be anti-Semitic, as the synagogue was closed at the time. Nevertheless, Oskar Deutsch, the head of Austria’s Jewish community, is urging Viennese Jews to stay at home. Austrian Chancellor Sebastian Kurz has stated that, while not mandatory, children would be exempt from going to school the following morning.

We are going through difficult times in our republic. I would like to thank all the emergency services who risk their lives for our safety, especially today. Our police will act decisively against the perpetrators of this hideous terrorist attack.

This jihadist attack is the latest to strike a major European metropolis. Most major attacks recently have occurred in France. This has led to French President Emmanuel Macron increasing his anti-Muslim rhetoric and implementing anti-terrorist policies that many see as marginalizing France’s Muslim community. The leaders and people of various nations in the Middle East have responded with outrage. Boycotts on French goods have been called from Turkey to Kuwait to Qatar; the streets of Baghdad and Gaza have seen rowdy protests.

The European Union showed solidarity with France in the face of the Islamic backlash. Now that the threat of Islamic terrorism is showing itself again to be a Europe-wide problem, rather than an issue limited to one country, EU leaders are calling for more unity against the jihadist onslaught.

Macron tweeted in response to the attack (emphasis added throughout):

We, the French, share the shock and the grief of the Austrian people struck this evening by an attack in the heart of their capital, Vienna. After France, it is a friendly country that is attacked. This is our Europe. Our enemies must know who they are dealing with. We will not give up anything.

Italian Foreign Minister Luigi Di Maio called it “a cowardly attack, which we strongly condemn. Italy is close to the Austrian people. Europe must react.”

German Chancellor Angela Merkel sent this message out through a spokesperson: “We Germans stand by our Austrian friends in sympathy and solidarity. The fight against Islamist terror is our common fight.”

More and more, Europeans are awakening to just how dangerous the threat of Islamic terrorism is to their societies—and to Europe as a whole. The terrorist in last week’s attack in Nice came into Europe from North Africa via Italy. Europe’s open borders mean jihadists can quickly travel across borders undetected and wreak havoc on any European city they want to.

Today, it’s Vienna, Nice and Paris. Where will it be tomorrow? Berlin? Madrid? Prague?

Following the beheading at the Nice church, a Greek Orthodox priest was shot in Lyon; the assailant is still at large. The jihadists are primarily targeting Christian gatherings. Where will the next attack take place? At a Christmas market in Munich? While people are having mass in Saint Peter’s Basilica? These uncertainties and possibilities are putting the entire Continent on edge.

Europeans are trying to stop the jihadist threat at the European level. But the various measures put in place within national borders are doing little to stop the violence.

Your Bible prophesies that Europe will end up confronting an external source to destroy Islamic terror once and for all.

And at the time of the end [the time we are living in right now] shall the king of the south push at him: and the king of the north shall come against him like a whirlwind, with chariots, and with horsemen, and with many ships; and he shall enter into the countries, and shall overflow and pass over.

For nearly three decades, the Philadelphia Trumpet has identified the radical Islamist movement as the “king of the south.” And the leader of the radical Islamist camp is a certain sharia theocracy that actively sponsors terrorist groups to seize power in Middle Eastern countries—such as Iraq, Lebanon, Yemen and Gaza—while sponsoring individual terrorist attacks all over the world from Paris to Buenos Aires. This nation is Iran.

Trumpet editor in chief Gerald Flurry writes in his booklet The King of the South:

But who is the “king of the north”? It has to be a power to the north of Iran and the Middle East. It can’t be Russia, which is on friendly terms with Iran. It has to be a united Europe. Late theologian Herbert W. Armstrong identified the end-time king of the north as the successor of the ancient Roman Empire—a true military juggernaut based in all of Europe—in his booklet The Proof of the Bible (request your free copy).

The Germans are excellent war strategists and warriors. They are savvy enough to realize that they will never have peace with Iran. They know that sooner or later, their two religions—their two civilizations—will clash.

This, on the surface, may seem like good news. After all, wouldn’t the world be a safer place once state-sponsored terrorism is dealt with once and for all? In actuality, this will be only the first battle of a massive war that will engulf the entire world. But you can avoid the suffering that is coming. Start by reading our free booklet The King of the South. It not only explains the prophecy in Daniel 11:40, but also shows how you can be protected from this coming time of worldwide trouble.

Update: The article has been updated to reflect the changing situation. Police initially reported multiple gunmen—now they believe there was just one.