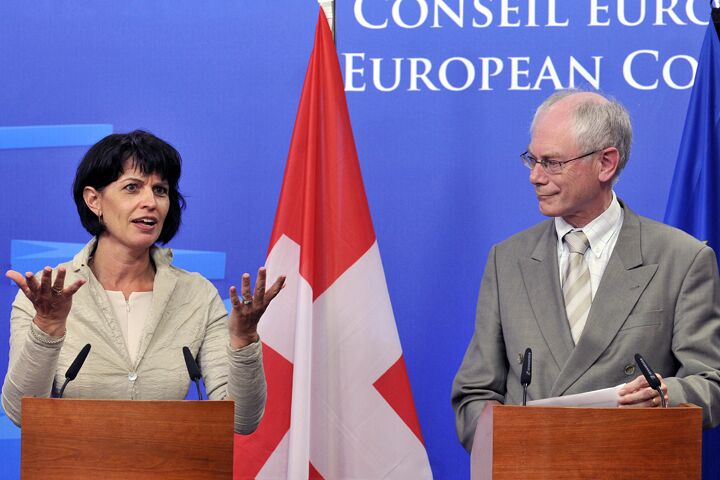 Switzerland must submit to European Union law or face being cut off from EU markets, a report by EU foreign ministers published on December 14 says.

Switzerland’s current relationship with the EU has “clearly reached its limits” and has to change, the report says. Switzerland cooperates with the EU on a case by case basis, resulting in a series of over 120 agreements that give Switzerland similar access to the European Union as an EU member.

Its cooperation with Europe goes beyond the economy. EurActiv.com reports that “The ‘Bilateral i’ and ‘Bilateral ii’ agreements effectively mean that Switzerland enjoys the benefits of EU member states and [European Economic Area] countries on free movement of people, goods, services and capital—but without having lost any sovereignty or decision-making power.”

It remains a geostrategic absurdity that we have this white spot on the European map.
Eurogroup Chairman Jean-Claude Juncker
Switzerland is even a member of the EU’s Schengen scheme—an open borders agreement that allows easy travel between states.

But the EU wants more.

The foreign ministers’ report states that current agreements are “incoherent,” “unwieldy” and “inconsistent.”

The ministers, says the report, have “come to the conclusion that while the present system of bilateral agreements has worked well in the past, the challenge of the coming years will be to go beyond this complex system, which is creating legal uncertainty and has become unwieldy to manage and has clearly reached its limits.”

Switzerland, it says, now needs “efficient arrangements” so that it adopts and enforces EU law—including case law decided by the European Court of Justice.

The EU wants Switzerland to change its tax system, as it says it gives firms an unfair incentive to locate in Switzerland rather than another EU nation. It also wants more Swiss help in combating tax evasion.

“It is not surprising that the EU Council have raised the stakes,” political scientist Dieter Freiburghaus was quoted by swissinfo.ch as saying. “Voices have been loud for some time. This summer, then Economics Minister Doris Leuthard was confronted quite harshly with the demands from Brussels” (December 14).

Chairman of the Eurogroup (eurozone finance ministers) Jean-Claude Juncker said that Switzerland should join the EU in an interview with Die Zeit on December 15.

Switzerland held a referendum on joining the EU in March 2001. Seventy-seven percent of voters rejected joining.

Europe’s stance on Switzerland demonstrates how expansionist and aggressive the EU can be. It wants to ignore the wishes of Swiss voters to cajole the nation into coming under the EU. Of course, it is not so keen to adopt poorer eastern European nations—but Switzerland has a higher gdp per capita than any EU nation other than Luxembourg.

Swissinfo.ch states that according to Freiburghaus, and another political scientist, René Schwok, “Bern should have no real fears. The EU is in no hurry because it has many internal problems to solve” (ibid.).

They may be right, for now. But once the EU has fixed its economy and gotten its house in order, it will be looking for more states to dominate. As the Trumpetwrote in 2001:

The EU’s masterful step-by-step strategy of extracting economic, political and military cooperation from its subjects has worked on Switzerland. If the Swiss think they can play neutrality games with the EU, they are gravely mistaken. They escaped two world wars, but they shall not escape the third.

As that article states, “In the coming final European conflict, prophecy indicates, sadly, that the Swiss will suffer much more than just the breath of Nazidom at its borders.”

Switzerland has worked with the EU to the point that it is now dependent upon it. It can and will be absorbed. For more information on Switzerland’s future, see our article “Why Switzerland Will Not Remain Neutral.”