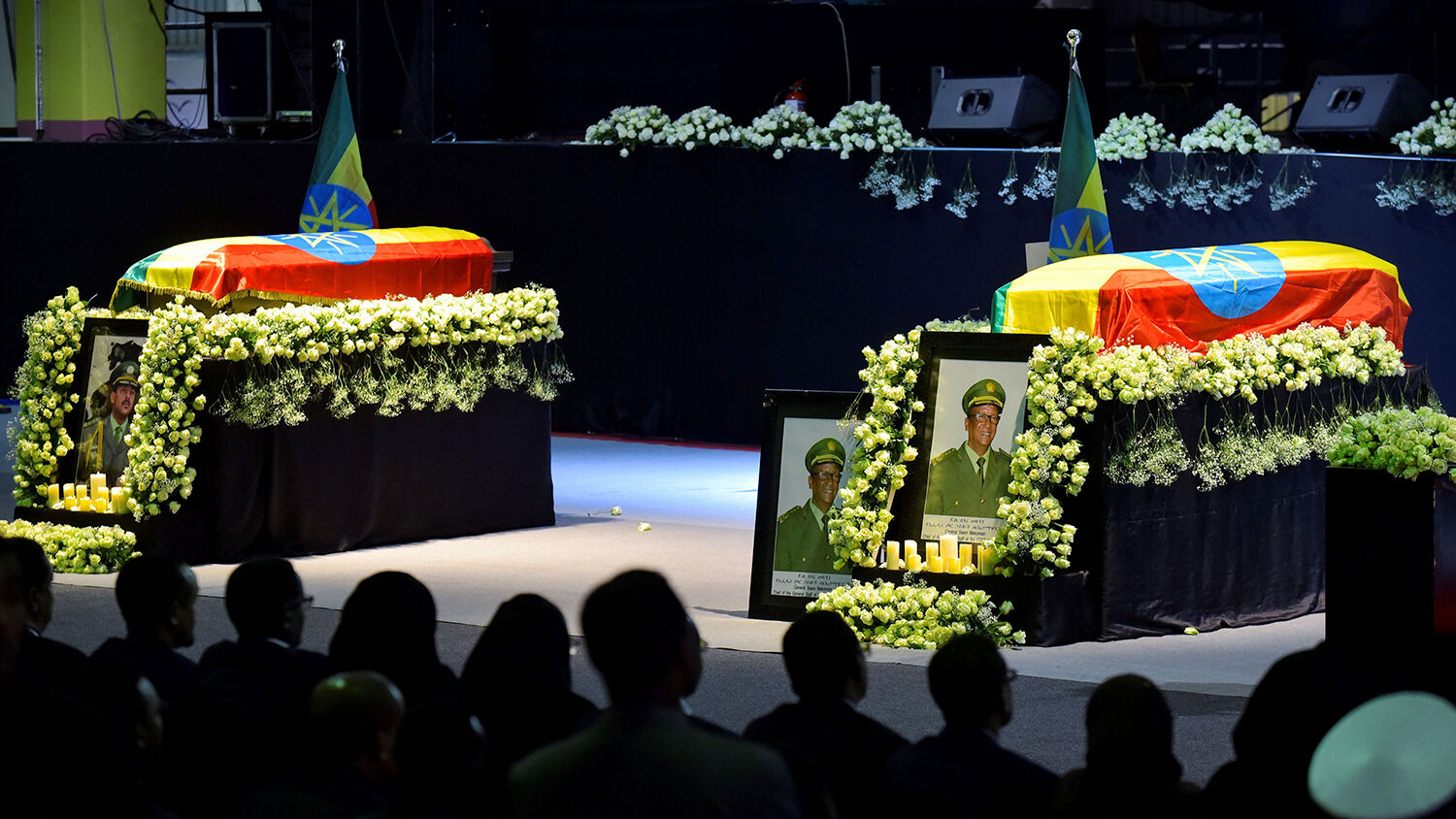 Ethiopian military and religious leaders condemned, on June 25, the assassinations of the army chief and other top officials at an emotional funeral service at which Prime Minister Abiy Ahmed wept openly throughout.
MICHAEL TEWELDE/AFP/Getty Images

The assassinations are a stark reminder of the nation’s underlying vulnerabilities.

Three government officials were shot dead on June 22, as armed forces attempted to overthrow the regional government in Ethiopia’s northern state of Amhara. The coup failed, but it has plunged the unstable country into even worse uncertainty.

The coup started when armed forces, reportedly led by Amhara’s security chief, burst in on a government meeting and shot dead the state president and his adviser. Ethiopia’s army chief of staff was later shot dead by his bodyguard in Amhara’s capital, Bahir Dar. Several residents near the capital city reported hearing gunfire over the course of four hours.

In a televised address to the nation the next day, Ethiopian Prime Minister Abiy Ahmed said that the national government had the situation under control and labeled Gen. Asaminew Tsige as the coup’s mastermind.

Asaminew was reported dead on Monday, and police say they have arrested more than 180 suspects.

In the week before the attempted coup, General Asaminew had circulated a video on social media, calling for his ethnic Amhara militias to arm themselves. The state president and his adviser were in the middle of a meeting discussing how to respond to the video when they were killed.

Ethnic division within the country is rife. The coup attempt comes as no surprise.

“The failed coup in Amhara is the culmination of many months of ethnic and political strife,” said Ludger Schadomsky, head of Deutsche Welle’s Ethiopia language service.

Ethiopia is a landlocked country on the Horn of Africa with a population of 112 million people in 90 ethnic groups, speaking more than 80 languages and with two main religions.

About 44 percent of the population adheres to Ethiopian Orthodox Christianity, and about 34 percent adhere to Islam (mainly Sunni). The remainder of Ethiopians are Protestant, Roman Catholic or believers in traditional religions.

The failed coup stems from raging violence between the ethnicities and from dissatisfaction with the government.

General Asaminew was of the Amhara ethnicity. In 2009, he received a life sentence for planning a military coup. But in 2018 he was pardoned by newly-elected Prime Minister Abiy, an ethnic Omoro, as part of his efforts to lead ethnic reconciliation. Asaminew was then installed as head of Amhara’s Peace and Security Bureau.

The majority of ethnic Amharas are Christians, mainly Ethiopian Orthodox. Ethnic Oromo are mainly Muslim. Prime Minister Abiy is the first Oromo to lead the national government. He is a Christian but was raised by a Muslim father and frequently studied Islamic texts.

The ruling coalition, the Ethiopian People’s Revolutionary Democratic Front, took power in 1991. It was dominated by the Tigrayan ethnic group, accounting for about 6 percent of Ethiopians. The Front squashed virtually all dissent, including ethnic nationalism.

Three years of widespread anti-government protests forced the Tigrayan prime minister to resign in 2018, and Abiy took power. He was not voted in through a general election, but was appointed by the Revolutionary Democratic Front.

Since coming to power, Abiy has strived to lead political reform and open up the isolated country. He has done this by releasing political prisoners, such as Asaminew, removing bans on political parties, and prosecuting officials accused of human rights abuses.

These efforts haven’t accomplished much. Ethnic bloodshed, once kept in check by the iron fist of previous governments, has risen in many areas, including Amhara. “Local leaders are now taking advantage of the new freedoms to build ethnic power bases,” Reuters reported. “Groups that felt excluded in a system once dominated by Tigrayans are flexing their muscles.”

Since taking power, Abiy has also made what some consider very concerning personnel changes, especially in the military and intelligence sectors. Matt Bryden, head of regional think tank Sahan Research, told Reuters that the prime minister “seems to be dismantling the [Ethiopian People’s Revolutionary Democratic Front] and is entertaining thoughts of altering the architecture of federalism, but he hasn’t given any clear direction he’s heading in,” saying that the “uncertainty is creating a lot of competition and … driving a lot of the friction and violence.”

According to a source in Addis Ababa, ethnic militias are committing vigilante violence, government officials have been killed, homes have been burned, and women have been raped. The United Nations estimates that 2.4 million Ethiopians have been displaced.

“The Ethiopian government says it now has the coup under control,” stated Geopolitical Futures. “Even if that’s true, the government clearly does not have control over the broader domestic political situation in the country.”

Although the attempted coup appears to have failed and there are no current reports of foreign interference, Ethiopia’s instability means that at the right time and under the right circumstances, another power could gain control. Bible prophecy says that at some point Ethiopia’s government will fall into Iran’s grip.

This prophecy is found in Daniel 11:40 and 43: “And at the time of the end shall the king of the south push at him: and the king of the north shall come against him like a whirlwind, with chariots, and with horsemen, and with many ships; and he shall enter into the countries, and shall overflow and pass over. … But he [the king of the north] shall have power over the treasures of gold and of silver, … and the Libyans and the Ethiopians shall be at his steps.”

Trumpet editor in chief Gerald Flurry explains this prophecy in Libya and Ethiopia in Prophecy, writing:

This verse states that Libya and Ethiopia are … going to be closely allied with Iran! …

This is why the Trumpet watches Ethiopia closely. For more information on this prophecy, request your free copy of Libya and Ethiopia in Prophecy.