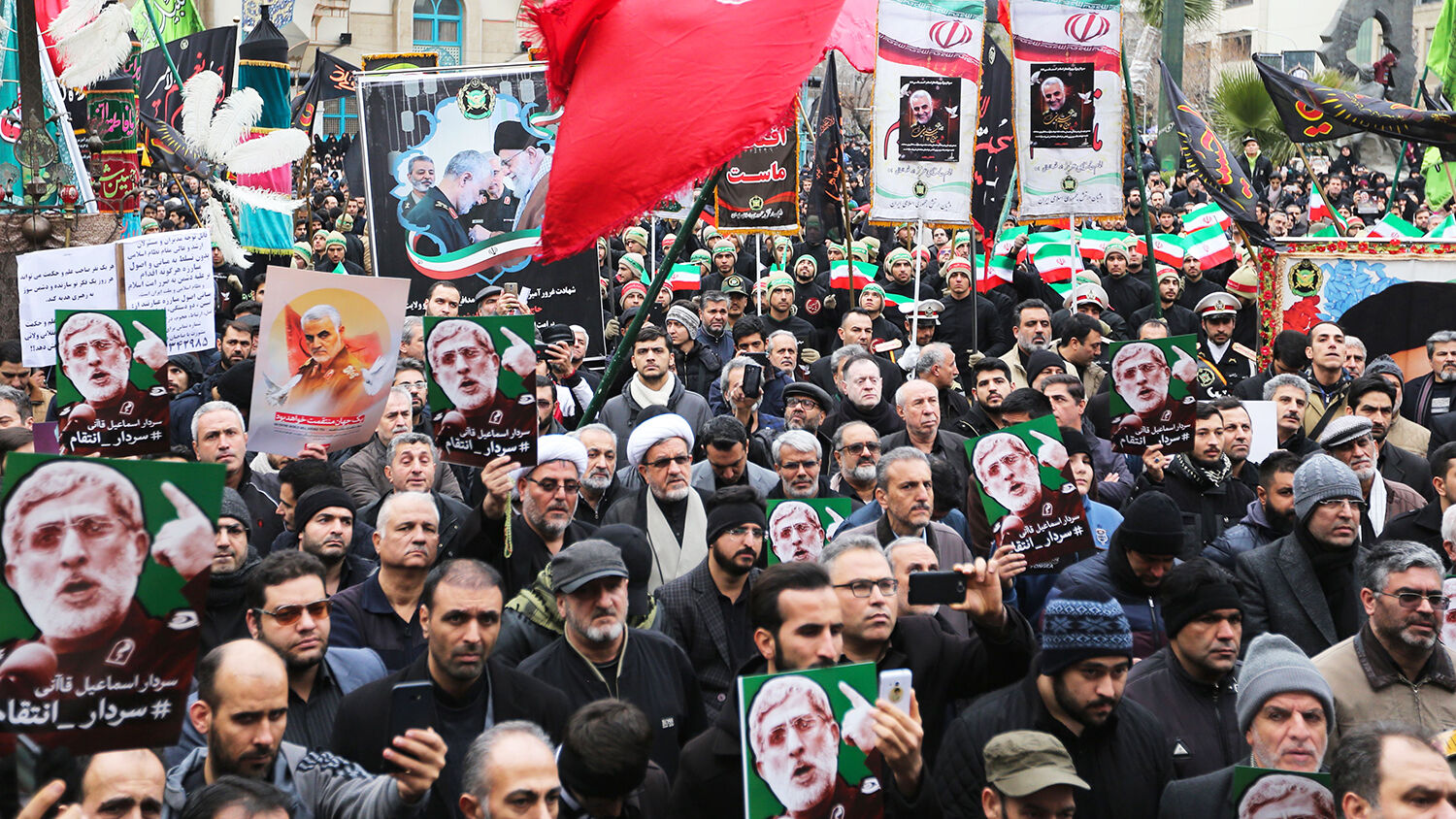 What to expect from Ismail Qaani’s leadership

Iran’s foreign policy is about to undergo one of its most significant developments. Just hours after the assassination of Quds Force Cmdr. Qassem Suleimani, Iranian Supreme Leader Ayatollah Ali Khamenei named Brig. Gen. Ismail Qaani the new commander of the elite Quds Force, praising him as one of Iran’s most prominent leaders.

Who is this largely unrecognized man, and what does his appointment mean for the direction of Iran’s foreign policy?

Ismail Qaani was born in the city of Mashhad, Iran’s second-largest city and an important pilgrimage site for Shiite Muslims. Iranian media quoted Qaani calling himself and Suleimani “children of war.” Like his former commander, Qaani joined the Islamic Revolutionary Guard Corps (irgc) when he was 20 years old, when Iraq invaded Iran in 1980. From his youth, Qaani grew up devoting his life to the Islamic Republic and its ideology.

Throughout the Iran-Iraq War (1980–1988), Qaani served in various divisions of the irgc. In December 1982, he was appointed commander of the newly established Fifth Nasr Division, and later of the 21st Imam Reza Division. During the war, Qaani quickly rose in prestige and began developing a close relationship with then President and current Supreme Leader Khamenei.

Esmail Qaani was #QasimSoleimani’s deputy in the Quds Force. Like Soleimani, he was a revolutioary guards commander during the 1980-88 Iran-Iraq War. Qaani (second from right) in this picture from, circa 1986, with then president and now leader @khamenei_ir (with glasses) #Iran pic.twitter.com/c1Y1mlsrl9

As reward for his heroic actions in the war, on Aug. 17, 1988, irgc Cmdr. Mohsen Rezaei appointed Qaani the new deputy commander of the irgc Ground Forces in Mashhad. In June 1992, Qaani oversaw the brutal crackdown on Kurdish protesters in the province.

As deputy commander of the Quds Force, much of Qaani’s role revolved around overseeing the distribution of funds and military shipments.

While the charismatic and Arabic-speaking Suleimani focused on expanding Iranian influence in Syria and Lebanon and building a close relationship with Syrian President Bashar Assad and Hezbollah Secretary General Hassan Nasrallah, Qaani functioned as a perfect counterpart, focusing on Iranian influence in Afghanistan and throughout Africa.

Qaani made several trips abroad to African nations. On Nov. 23, 2009, he traveled with then President Mahmoud Ahmadinejad to several countries, including Gambia and Senegal.

According to the Jerusalem Post, Qaani “was responsible throughout the years for the distribution of funds to proxy groups such as Hezbollah and other terrorists in Africa.”

A U.S. Treasury Department statement in March 2012 said that Qaani oversaw the “financial disbursements to [Quds Force] elements, including elements in Africa.” The department held Qaani responsible for a 2010 weapons shipment bound for Gambia but intercepted in nearby Nigeria.

Undersecretary for Terrorism and Financial Intelligence at the time, David S. Cohen, said: “Today’s action again exposes Iran’s malign influence in the Middle East, Africa and beyond … to foment violence in Syria and Africa.”

In 2012, as a consequence of his involvement, Qaani was added to the Treasury Department’s Specially Designated Nationals list according to Iran Watch, which effectively froze his financial assets under U.S. jurisdiction.

According to a 2012 biography of Ismail Qaani by Ali Alfoneh of the American Enterprise Institute for Public Policy Research, “While Suleimani is usually more direct in his speeches, Qaani hides behind official rhetoric.” According to the report, which cites Farsi open-source material, Qaani saw the Arab Spring “as continuity of ‘the path of Iran’s Islamic revolution.’”

The Arab Spring took root throughout North Africa, causing thousands of anti-government protests to erupt across the continent, toppling regimes in Algeria, Egypt, Libya, Tunisia and Yemen. Qaani saw the Arab Spring as the next step in extending Iranian control to Africa.

“[B]ased on this information … while Suleimani attends to the security concerns in western Iran, such as developments in Iraq, Syria and Lebanon,” the 2012 biography concluded, “Qaani may oversee the [Quds Force] activities in … more distant countries in Africa.”

This is supported by an interview by the political deputy in the supreme leader’s Military Politico-Ideology Bureau translated by Will Fulton, a Farsi translator and Iran analyst, on Twitter, highlighting Qaani’s “close relations” with resistance groups in Africa, according to an Iranian general:

Brig. Gen. 2nd Class Rasoul Sanaei Rad explained that Qaani’s “primary work” as [Quds Force] deputy commander has been in “implementing staff affairs, organizing [forces], and logistics.” … He described him as “a figure in the shadow the Quds Force” who avoided any media attention. … More importantly, the elements of Qaani’s career that the irgc and Office of the Supreme Leader choose to highlight (e.g. ties in Africa) are indicators of what might be expected from Qaani’s leadership.

According to these assessments, with Qaani now spearheading the elite Quds Force, we can expect Iran to shift its focus more toward increasing Iranian influence in Africa.

It is possible we are already seeing Qaani’s new Africa strategy being implemented.

The day after the U.S. assassination of Suleimani and Qaani’s appointment, militants from the al Qaeda-linked al-Shabaab terrorist group conducted their first attack against a U.S. base in Kenya, resulting in the deaths of three Americans. Details of the attack indicate that it was hastily organized and poorly executed, as if done in a rush as retribution for Suleimani’s death.

Geopolitical Futures reported, “Shabaab claimed that it attacked the military base for the sake of ‘al-Quds’ [Arabic for Jerusalem], which is similar rhetoric to that used by the Iranians to legitimize previous operations of Suleimani.”

Al-Shabaab militants are also believed to have received training from Iran in Afghanistan on waging asymmetric and surprise warfare. This training was likely coordinated by Qaani because of his many years of experience in the rugged country. The support for al-Shabaab and the recent attack on the U.S. in Kenya show that Iran is working to gain control of Africa.

Daniel 11:40 says: “And at the time of the end shall the king of the south push at him: and the king of the north [a German-led European Union] shall come against him like a whirlwind, with chariots, and with horsemen, and with many ships; and he shall enter into the countries, and shall overflow and pass over.”

For years, the Trumpet has identified radical Islam, led by Iran, as the end-time fulfillment of the biblical king of the south. Today, Iran is an extremely pushy and aggressive nation. This has become increasingly more obvious over the past few weeks and months as it is becoming bolder and bolder in its willingness to attack foreign entities.

However, with Suleimani dead and regional tensions looming nearer to war, we can expect the new commander, who has managed to avoid media coverage, to redirect its focus to Africa where Iran can better cover its malign activities, just as the Bible prophesies.

Daniel 11:42-43 describe Iran as forming an Islamic alliance in which it will exert some form of control over the nations of Egypt, Libya and Ethiopia—likely referring to the Horn of Africa region as a whole.

A U.S. Africa Command statement on January 6 said it “has observed other nations, including Iran, seek increased influence in the Horn of Africa.”

Notice: The United States is not mentioned in this end-time clash prophesied in Daniel. There is a reason why.

Iran is seeking to exert influence in the Horn of Africa primarily to gain control over the vital Red Sea shipping lane. An estimated 4.8 million barrels of crude oil and refined petroleum flowed through this strait each day in 2016, more than half of it sailed toward Europe and the United States.

Trumpet editor in chief Gerald Flurry writes in his booklet The King of the South (free upon request):

The stage is being set for an Islamic group of nations to be led by Iran as the prophesied king of the south, which will push at the king of the north, the European Union. …

The two nations of Libya and Ethiopia are mentioned in Daniel 11:43, along with Egypt. These two nations are the key that unlocks the strategy of radical Islam. That strategy is going to shake the U.S. and Europe to their foundations! …

So you need to watch Libya and Ethiopia. They are about to fall under the heavy influence or control of Iran, the king of the south.

While Iranian activities in Africa are nothing new, the combination of timing and focus will make this one of the most significant developments to watch throughout this new decade.

Iran already has a firmly established position in Yemen via its Houthi proxy. After the Arab Spring overthrew leaders in Egypt and Libya, we briefly saw radical Islam gain control of both countries’ governments. Now, renewed discontent and protests throughout the region are resurrecting fears of a second Arab Spring. This time, there will be considerably more Iranian support.

As world events continue to race forward at an accelerated pace, watch for the new Quds Force commander, Ismail Qaani, to redirect Iran’s attention toward Africa and to ultimately gain control of the Red Sea shipping lane.